How to Use Amazon CloudWatch Events to Monitor Application Health

In this post, I will show how to inject your own events into CloudWatch Events, and define event patterns and their corresponding responses.

Using this color-coding, you can monitor an application’s availability and pursue follow-up actions, if required.

Set up the solution

This solution requires you to have a central location that will collect all the health-check data, analyze it, and then take action based on the color-coding. To do this, you will use CloudWatch Events and have the health-checking component send reports as events.

You will use the put-events AWS CLI command, which expects an event entry to be defined by at least two fields: the Source and the DetailType (the latter defines the type of the detail, such as the payload of the event). I use com.mycompany.myapp as my Source. I use myCustomHealthStatus as the DetailType. For the optional payload of an event entry, I use a JSON object with one key, HealthStatus, with possible values of Green, Yellow, and Red. 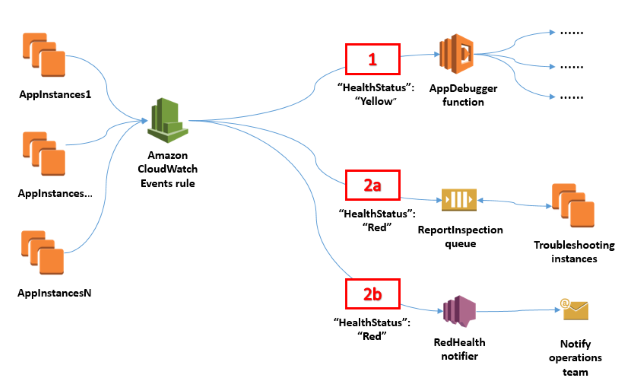 A CloudWatch Events rule is the conditional statement that maps an incoming event and routes the event to its targets. A target is a resource, such as a Lambda function or an Amazon SNS topic that is invoked when a rule is triggered. As shown in the preceding diagram, I set up the rules such that:

Now, let’s deploy the solution. Be sure to deploy it in the US West (Oregon) Region, or choose a region where all the services used in this post are supported.

To create the three targets:

To create the first rule with the AWS CLI:

If you prefer to use the AWS Management Console, you can create the first rule with the following steps:

Now, create the second rule, myCustomHealthStatusRed. Follow the same preceding steps, but replace Yellow with Red in the JSON file name, and save the file as RedPattern.json. Add the SNS topic, RedHealthNotifier, and the SQS queue, ReportInspectionQueue, which you created earlier as two targets for your rule. Make sure to use a different ID for the second target if you are using the AWS CLI, or click Add Target one more time in the AWS Management Console. If you use the AWS CLI, add resource-based policies for CloudWatch Events to invoke each of the targets.

Start with a test event by saving the following to a file named TestYellowEvent.json.

Create two more files named TestRedEvent.json and TestGreenEntry.json, and replace the value of the HealthStatus field with Red and Green, respectively.

Run the following command to inject a custom event with Yellow status.

Run the following command to inject a custom event with Green status.

Run the following command to inject a custom event with Red status.

You can verify the results by using the CloudWatch console:

When you inject the Green event, nothing happens because there is no rule in CloudWatch Events that matches this event. However, when the Yellow event is injected, CloudWatch Events matches it with a rule and invokes the Lambda function. The function in turn generates an entry in the corresponding CloudWatch Logs group, and the CloudWatch metrics can be verified from the Lambda console. Similarly, the Red event results in a message sent to the SQS queue that can be received from the Amazon SQS console and published to the SNS topic, which in turn sends an email to the email address you subscribed during the target-creation step.

If you were to inject an event with a HealthStatus of, say, Orange or with a detail-type of, say, myProcessStatus, the event would still be injected. However, the event would not match any rules and therefore would be treated similarly to the Green event.

In this post, I showed you how to create two CloudWatch Events rules that monitor for color-coded health status reports from multiple instances of an application. I simulated the input from the health-checking component by using the put-events CLI command. Your applications can also can use the AWS SDK to inject the events.

If you have comments about this blog post, please submit them below in the “Comments” section. If you have troubleshooting questions related to the solution in this post, please start a new thread on the CloudWatch forum.

More from this author can be found here.