YOLO (You Only Launch Once), The Six-Week Fundraising Rule, CryptoKitties, and Measuring Diversity in the Startup World 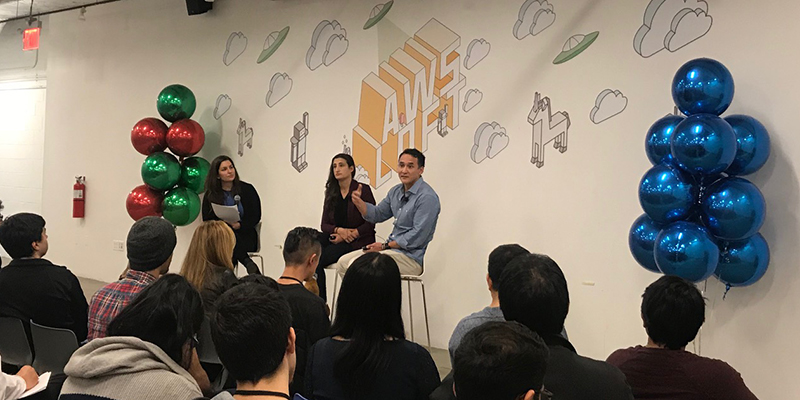 If you think the diversity of your startup doesn’t matter when you hit the fundraising trail, whether it’s for an early round or at later stages – you had better think again. “We’re not going to be afraid to measure,” Hayley Barna, who focuses on consumer investments at First Round Capital, recently told a crowd gathered at the AWS Loft in New York City’s SoHo neighborhood. “We’re looking at the founders that we’re funding and asking the questions: What are their racial backgrounds? What are their genders? You are what you measure. I think we all know that in the tech world, so we have to be comfortable measuring.”

Diversity in startup-land was one of the topics Barna and Ed Sim founder of NYC-based VC firm Boldstart tackled, and both were clear to separate that topic from another that has dominated not just tech news in 2017 but news generally: sexual harassment. While sexual harassment may be a symptom of workplaces lacking in diversity, don’t conflate the two, Barna says.

“Those are different issues, right?” Barna says. “People should treat each other decently. It sucks that there’s bad actors out there, and I am personally am very happy that some of these stories are surfacing. I think it shows that there’s enough women and the networks are strong enough that data points are being compared and that people are being believed and stories are being written about in press. I’m actually hopeful on that angle that things are being cleaned up.”

Sim, whose firm focuses on the enterprise space, admits that the B2B world tends to be an even less diverse place than consumer tech. And for that reason, he urges enterprise startup founders to make that much more of an effort.

“When we do VP searches for our enterprise companies, we (encourage our portfolio) to prioritize for the first 30 days to get as many amazing, talented women recruits first to see if they satisfy their need,” Sim says. “You really have to screen and filter for that. It’s too easy to just go, you know, hire, you know, a male, for example, in sales, right? It’s very important from day-one to think about how to hire around that.”

Beyond the massive and tough question of how to make the tech world more diverse, here’s what else Barna and Sim see coming for startups, and what they’re paying special attention to as investors. You can listen to the entire interview here.

Introducing the world to cryptocurrency with CryptoKitties

ICOs and the absolute rocket that Bitcoin has been over the past year have grabbed a lot, or maybe all, of the attention in the cryptocurrency world, but for a lesson in how it all might work in the end just look at CryptoKitties, Sim says, who was fascinated by the startup’s launch in 2017.

From buying and trading digital cats, you begin to see how blockchain makes it simple to own and track any digital asset. “It’s not that far of a leap to think about how titles for real estate might be on there, or commercial leases, or auto leases,” Sim says. “So, there’s a B2B aspect. But I think CryptoKitties is fascinating because of the idea of using the blockchain to track ownership.”

That said, Sims thinks the real broad-based application of cryptocurrencies and blockchain technologies in the finance world will take a good chunk of time.

“I think that a lot of big banks are tourists because the boards are saying, ‘Let’s actually do something in the Blockchain,’ but they’re actually not going to put anything to production,” Sim says. “I’m super excited about it in the long term. In the short term, I’m skeptical. I am buying some Bitcoin and Ethereum for fun, and I do have a CryptoKitty, and so I think it’s very important to kind of, experiment with everything and keep an open mind.”

YOLO – You Only Launch Once

Borrowing a term coined by a friend and one of the founders of Harry’s, Barna drove home the point that especially in today’s crowded consumer marketplace you get one shot at a launch.

“You really have to get your launch right in the consumer world these days,” Barna says. “It’s much harder to sort of be out there with, a not-so-great brand testing it, and then launch afterward. You gotta launch with a bang.”

Barna points to MissionU, a company in the First Round portfolio, that pulled off exactly the kind of bang-up launch she describes.

MissionU describes itself as one-year education that can help anyone launch a career, especially in the kinds of jobs that growing tech companies are looking to hire for. In a world of massive student debt, and uncertain economic future on top of it, MissionU struck a very loud chord, Barna says.

“The founder saw that if you can’t get into a top-100 college, the ROI for going to college, really isn’t there,” Barna says. “And those liberal arts degrees aren’t necessarily training you for the economy of today.

“MissionU is a one-year program. There is no tuition. You actually don’t pay a dime until you graduate from MissionU and you get a job. At that point, you share a portion of your salary, which, that aspect of it—I see some eyebrows raised in the audience—is part of what made MissionU such a great launch, because that is worth covering.”

When you decide to raise that first round of money from a VC, take it seriously—do your homework, and get your deal done in six weeks if possible

It seems obvious, but raising money is serious business with serious consequences for everyone involved—treat it that way, Barna says. And once you start, try and get your fundraising done in six weeks.

“Once you start, the clock starts,” Barna says. “Six weeks is a best-practice timeline. It could take longer, but you can’t be half-assing it, right? You’ve really got to think about who you want to get in touch with, and have all of those first meetings within the same week. You need to always be asking about next steps, and always setting deadlines, or asking, ‘What can I give you in terms of new information?’

Since the clock is ticking, you need to get answers fast, and that means get the rejections out of the way quickly.

“Try to get a fast no,” Barna says. “A slow no is the worst. So, really, try to weed through the investors and figure out if they’re really interested. That all falls into the bucket of—take the process seriously. Don’t, half-fund raise because that’s just a recipe for disaster.”

Dragging fundraising out for months might simply be a product of a busy founder’s life, but that won’t be how it’s viewed by potential investors. “It’s these conversations where an investor might say, ‘Oh, you’re still our fundraising? My friend told me about you over coffee and you talked to him three months ago. Why are you still raising money?’ ”

And remember, you aren’t a fill-in-the-blank tech du jour company—you are solving a really big (and hopefully lucrative) problem.

“Founders are always trying to pitch a technology to us,” Sim says. “Back in mid- ‘90s, it was Java, so ‘I’m a Java company.’ And now it’s, ‘I’m a wireless company,’ or ‘I’m an AI company,’ or ‘a blockchain company.’ The reality is, you’re none of those, that’s just the technology.

“I always ask the question—no matter what technology you’re using —what problem are you solving 10X or 100X better using the new technology? That is what you are.

“For us (as investors) it always goes back to the pain point. Don’t start with the technology. Start with the problem first, and figure out the best way to solve it.”