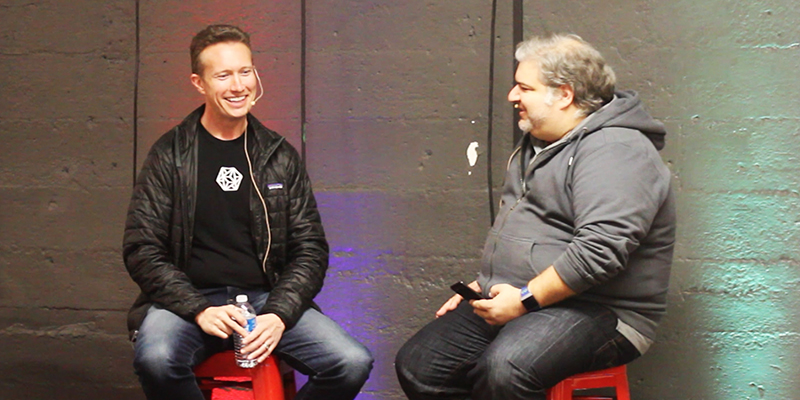 “There was a particular class that I always wanted to be in. This teacher has computers all around the classroom—your Commodore 64s, your Amigas, that sort of thing—and I was never in that class.”

But luckily for Sankauskas—and indeed luckily for the AWS community and pretty much anyone who’s interested in the future of tech, things changed for Sankauskas. When his family got their first computer, he tore voraciously through the instruction manuals.

“You couldn’t get me to read a fiction novel to save my life,” Sankauskas says, “but I read those reference manuals front to back.” The reason was simple and all-absorbing: “I had to know how this thing worked.”

The result of this binge read? Within a year, he was creating complex batch files to have a menuing system in order to streamline the computer experience for the rest of his family. He saw that the interface was too complex for the layperson to navigate. So he simplified it.

And, in essence, that’s still what Sankauskas is doing today. The main thing that’s changed? His audience is a whole lot larger than his immediate family.

Before helming services and infrastructure at Caffeine, he was the CEO at CloudNative, founder of Answers for AWS, and a 2013 winner of a NetflixOSS Cloud Prize. Now an AWS Community Hero, Sankauskas recently spoke to a full house at the AWS Loft space in San Francisco.

And though he touched on his accomplishments, Sankauskas was far more interested in looking to the future rather than dwelling in the present. He was especially interested in talking all things serverless.

While containers and serverless may be considered cutting-edge, Sankauskas’s work life hasn’t been as impacted by these as one might imagine. He’s been using them for a while. But serverless has impacted the development velocity for Sankauskas, making things speedier and more streamlined.

“The thing I really like about serverless is that all you have to do is think about the little function you’re running,” Sankauskas says. “All of the ops side of it pretty much goes away.”

Pros And Cons Of Serverless

But does serverless make the whole code-writing process simpler? That’s a tricky question; Sankauskas’ answer is “yes and no.”

As Sankauskas puts it, “If you’re starting from scratch and you’re thinking […] of being event-driven, yes, you can have a really good time with [serverless]. If, however, you’re thinking of a stateful application or something that needs a connection pool to multiple services, you’re going to have a much harder time. You can accomplish the same end goals, but you’re going to have to redesign how you’re doing things.”

But Sankauskas still has a lot of faith in serverless, despite the fact that it works better in terms of the event-driven. “It’s simple,” he says, and then corrects himself. “It can be simple.”

One of the major hurdles is getting a service up and running, but it’s making changes to that service that starts to cost money. Serverless definitely aids in that and, as Sankauskas is keen to explain, it can allow you to move quite quickly, especially in the early stages of building a start-up or when your business is undergoing a change. Another major bonus? It doesn’t cost you anything.

But Sankauskas also has advice for someone who’s been around for a few years and has a running app, and still wants to forge a path toward trying out serverless. “Pick off one feature that you think is a good use case for [serverless], and then go through one of the AWS tutorials or serverless tutorials and get a feel for the development process in these environments.”

And if you want to learn more, Sankauskas says, check out the AWS Open Guide. “If you can’t find it there,” he laughs, “it may be out of date.”

With so many applications of serverless, is it something that Sankauskas thinks is going to take over the world?

Sankauskas thinks of his own brainchild, Caffeine, as a poor use case for serverless. Live streaming audio and video content means you have to maintain a connection from the broadcaster to the ingest point…and then fanning that out to however many viewers there are at any given time.

Instead, Sankauskas thinks of serverless as yet another option. Today we’re spoiled for choice, and that’s a good thing.

“I was at a Christmas dinner and there was a fifteen-year-old and he wanted to go and build a game,” says Sankauskas. “And I think back to when I was fifteen—[this fifteen-year-old is] blessed. You have access to so many resources!”

But we’d say, even though Sankauskas didn’t have access to more than a 386 with two manuals for MS-DOS when he was a teen, he’s more than made up for that scarcity of resources.