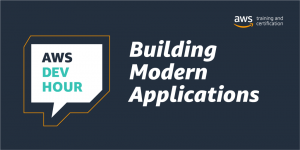 We’re down to two final episodes of AWS Dev Hour: Building Modern Applications on Twitch. Have you been joining? This free, live, and interactive series is designed for developers of all skill levels to gain hands-on experience building an end-to-end serverless application in the AWS Cloud. You can catch all previous episodes on demand and then join live this Thursday, March 11, at 4:00 p.m. PST on the AWS Twitch channel.

We’ve nearly completed our application, but we have one task left. We need to set up our continuous integration/continuous deployment pipeline (CI/CD) so we can efficiently deploy changes. We’ll incorporate services like AWS CodePipeline to set up continuous deployment—defined using the AWS Cloud Development Kit (CDK). Bring all your questions for our live chat with moderators who are AWS Authorized Instructors. They’re there to help you during each episode.

Built by developers, for developers, the series offers an interactive, fun, and hands-on approach that gives you the chance to learn by doing. Over the course of eight weekly episodes, AWS expert hosts Ben Newton and May Kyaw, both based in Australia, will take you through the end-to-end build of a serverless application in the AWS Cloud using the AWS Free Tier. You’ll start building a modern, full-stack, cloud-native application in the AWS Cloud, and in each episode, you’ll get to code in real time alongside your hosts, leveraging AWS Lambda, Amazon DynamoDB, Amazon API Gateway, the React library, authentication, Amazon S3, Amazon SQS, AWS CodePipeline, and more. Along the way, you’ll learn best practices for modern applications and better understand how AWS-Cloud-native applications differ from on premises. The AWS Dev Hour: Building Modern Applications series is part of AWS’s commitment to provide free skills training to 29 million learners globally by 2025 through innovative offerings that meet learners where they are.

Join us March 11 and learn more

Join us this Thursday, March 11, at 4:00 p.m. PST for episode seven on the AWS Twitch channel. Learn more about what’s planned for each episode, get calendar reminders, and subscribe to weekly emails. Subscribers will receive code, white papers, links to documentation, and other resources to help you progress. You can also simply join the livestream each week to submit questions and share your progress, or watch the episodes on demand whenever it’s convenient for you.