Software artifact repositories and their associated package managers are an essential component of development. Downloading and referencing pre-built libraries of software with a package manager, at the point in time the libraries are needed, simplifies both development and build processes. A variety of package repositories can be used, for example Maven Central, npm public registry, and PyPi (Python Package Index), among others. Working with a multitude of artifact repositories can present some challenges to organizations that want to carefully control both versions of, and access to, the software dependencies of their applications. Any changes to dependencies need to be controlled, to try and prevent undetected and exploitable vulnerabilities creeping into the organization’s applications. By using a centralized repository, it becomes easier for organizations to manage access control and version changes, and gives teams confidence that when updating package versions, the new versions have been approved for use by their IT leaders. Larger organizations may turn to traditional artifact repository software to solve these challenges, but these products can introduce additional challenges around installation, configuration, maintenance, and scaling. For smaller organizations, the price and maintenance effort of traditional artifact repository software may be prohibitive.

CodeArtifact repositories are organized into a domain. We recommend that you use a single domain for your organization, and then add repositories to it. For example you might choose to use different repositories for different teams. To publish packages into your repositories, or ingest packages from external repositories, you simply use the package manager tools your developers are used to. Let’s take a look at the process of getting started.

Getting started with CodeArtifact
To get started with CodeArtifact, I first need to create a domain for my organization, which will aggregate my repositories. Domains are used to perform the actual storage of packages and metadata, even though I consume them from a repository. This has the advantage that a single package asset, for example a given npm package, would be stored only once per domain no matter how many repositories it may appear to be in. From the CodeArtifact console, I can select Domains from the left-hand navigation panel, or instead create a domain as part of creating my first repository, which I’ll do here by clicking Create repository. 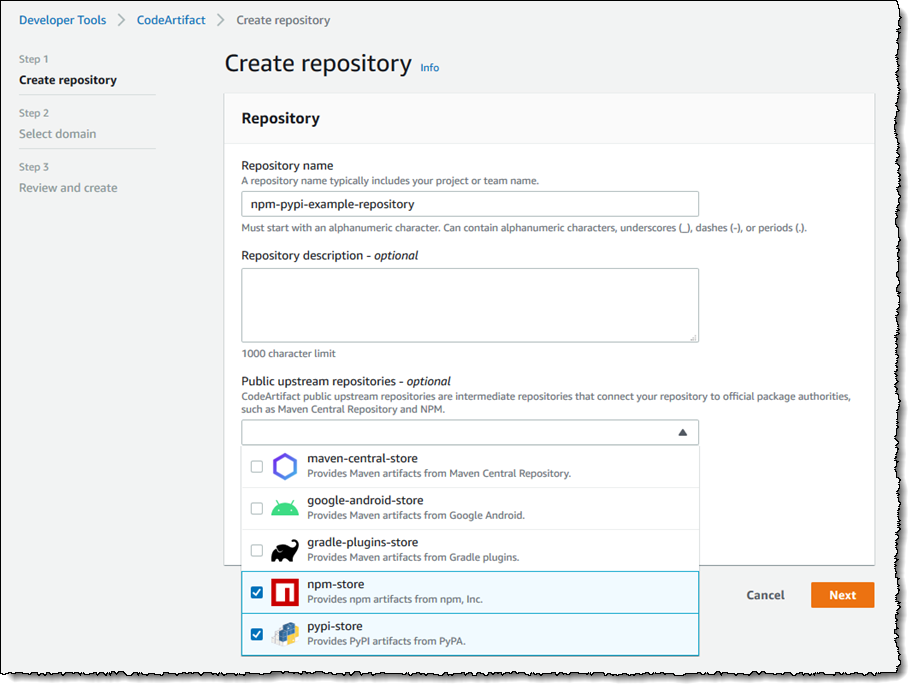 Clicking Next, I then select, or create, a domain which I do by choosing the account that will own the domain and then giving the domain a name. Note that CodeArtifact encrypts all assets and metadata in a domain using a single AWS Key Management Service (AWS KMS) key. Here, I’m going to use a key that will be created for me by the service, but I can elect to use my own. 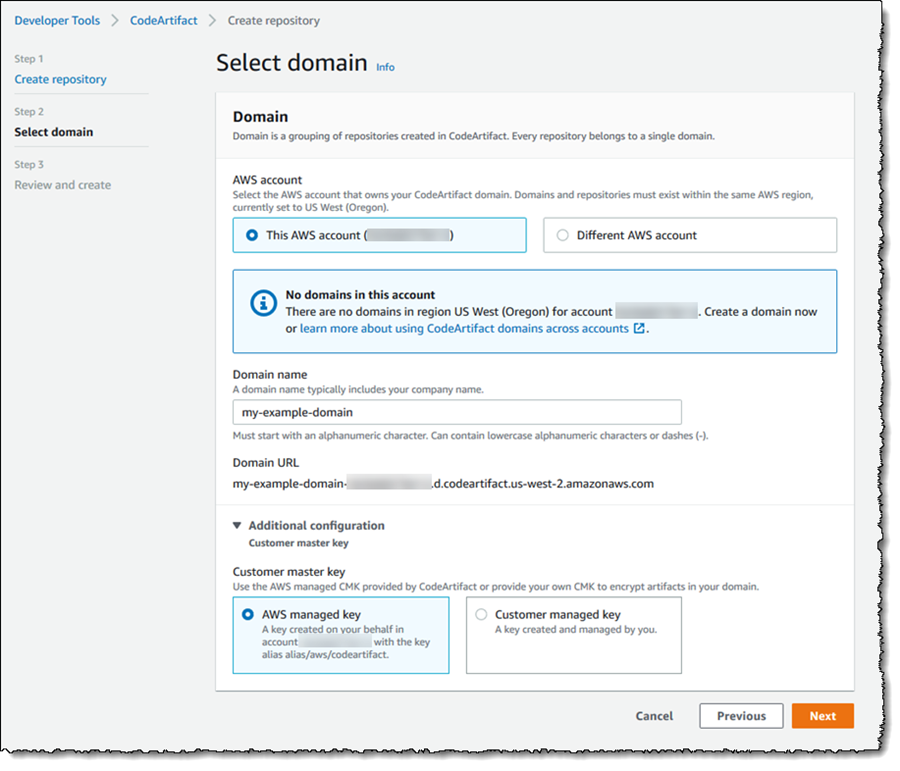 Clicking Next takes me to the final step to review my settings, and I can confirm the package flow from my selected upstream repositories is as I expect. Clicking Create repository completes the process, and in this case creates the domain, my repository, and two additional repositories representing the upstreams. 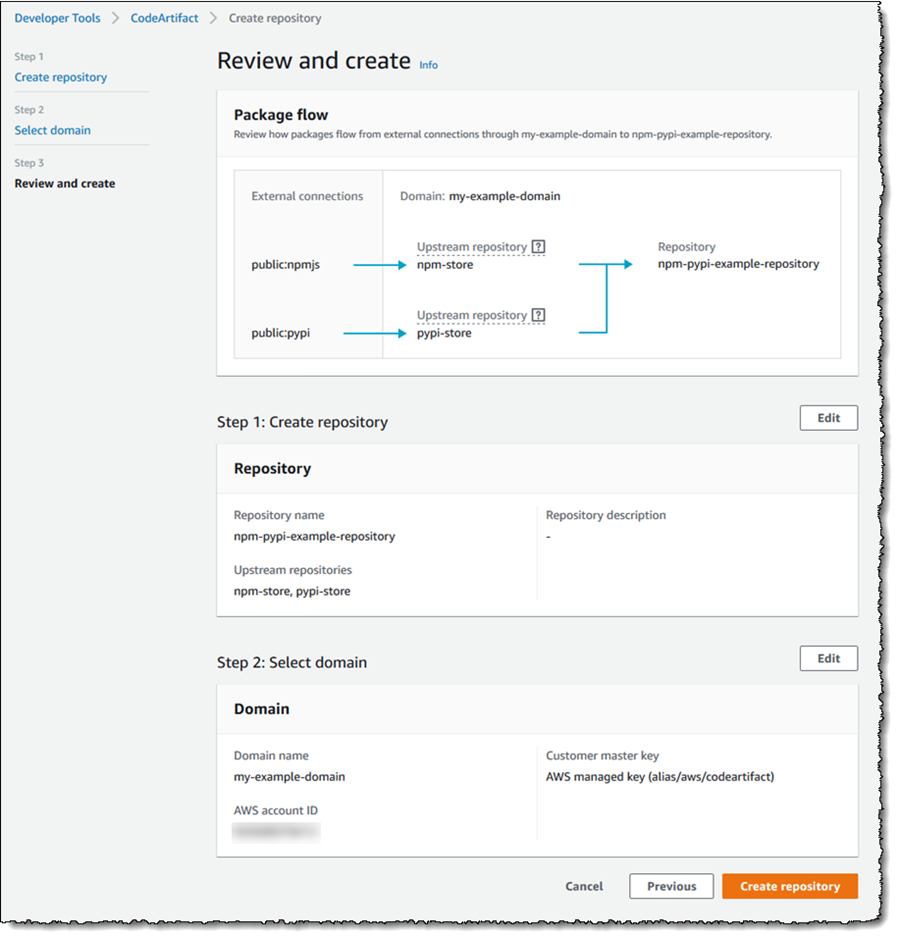 After using this simple setup process, my domain and its initial repository, configured to pull upstream from npm and PyPi, are now ready to hold software artifact packages, and I could also add additional repositories if needed. However my next step for this example is to configure the package managers for my upstream repositories, npm and pip, with access to the CodeArtifact repository, as follows.

In the resulting dialog I select the package manager I want to configure and I am shown the relevant instructions. I have the choice of using the AWS Command Line Interface (CLI) to manage the whole process (for npm, pip, and twine), or I can use a CLI command to get the token and then run npm commands to attach the token to the repository reference. 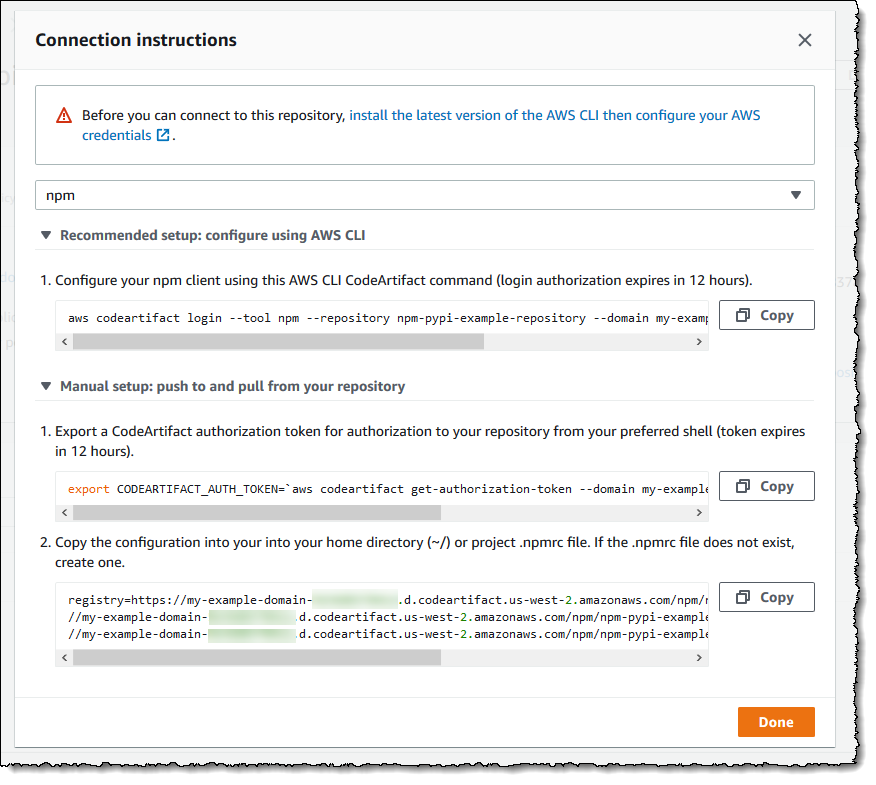 Regardless of the package manager, or the set of instructions I follow, the commands simply attach an authorization token, which is valid for 12 hours, to the package manager configuration for the repository. So that I don’t forget to refresh the token, I have taken the approach of adding the relevant command to my startup profile so that my token is automatically refreshed at the start of each day.

That’s it! I’m now ready to start using the single repository for dependencies in my Node.js and Python applications. Any dependency I add which is not already in the repository will be fetched from the designated upstream repositories and added to my CodeArtifact repository.

Let’s try some simple tests to close out the post. First, after changing to an empty directory, I execute a simple npm install command, in this case to install the AWS Cloud Development Kit (AWS CDK).

Selecting the repository in the CodeArtifact console, I can see that the packages for the AWS Cloud Development Kit (AWS CDK), and its dependencies, have now been downloaded from the upstream npm public registry repository, and added to my repository. 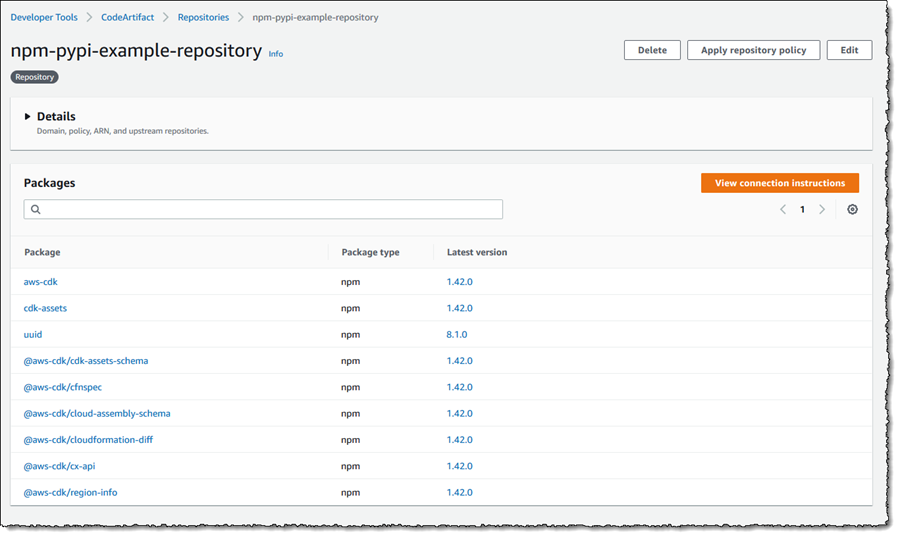 I mentioned earlier that CodeArtifact repositories are polyglot, and able to store packages of any supported type. Let’s now add a Python package, in this case Pillow, a popular image manipulation library.

In the console, I can see the Python package sitting alongside the npm packages I added earlier. 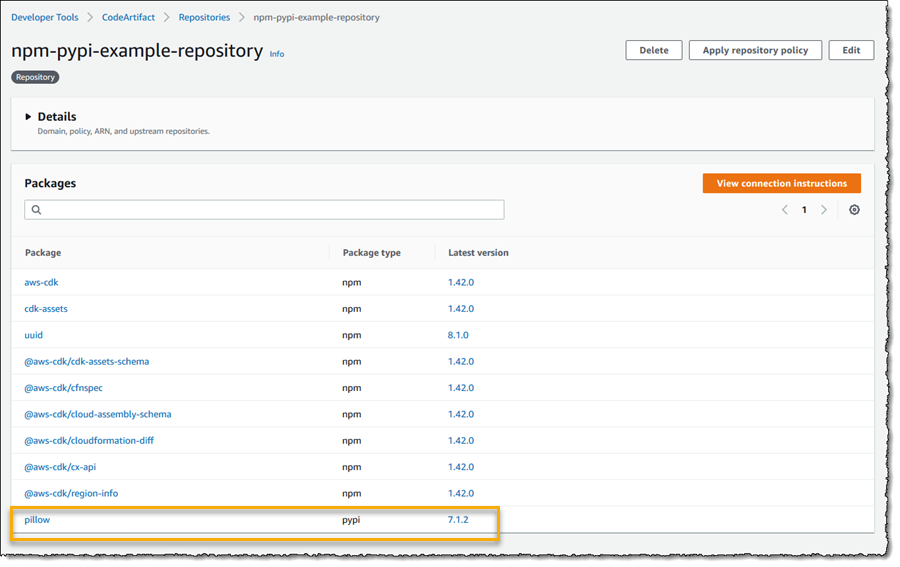 Although I’ve used the console to verify my actions, I could equally well use CLI commands. For example, to list the repository packages I could have run the following command:

As you might expect, additional commands are available to help with work with domains, repositories, and the packages they contain.

For additional best practice considerations on using CodeArtifact, see this blog post, and tune in on June 12th at noon (PST) to Twitch.tv/aws or LinkedIn Live, where we will be showing how you can get started with CodeArtifact.