Coming soon: Expansion of AWS Lambda states to all functions

In November of 2019, we announced AWS Lambda function state attributes, a capability to track the current “state” of a function throughout its lifecycle.

Since launch, states have been used in two primary use-cases. First, to move the blocking setup of VPC resources out of the path of function invocation. Second, to allow the Lambda service to optimize new or updated container images for container-image based functions, also before invocation. By moving this additional work out of the path of the invocation, customers see lower latency and better consistency in their function performance. Soon, we will be expanding states to apply to all Lambda functions.

This post outlines the upcoming change, any impact, and actions to take during the roll out of function states to all Lambda functions. Most customers experience no impact from this change.

As functions are created or updated, or potentially fall idle due to low usage, they can transition to a state associated with that lifecycle event. Previously any function that was zip-file based and not attached to a VPC would only show an Active state. Updates to the application code and modifications of the function configuration would always show the Successful value for the LastUpdateStatus attribute. Now all functions will follow the same function state lifecycles described in the initial announcement post and in the documentation for Monitoring the state of a function with the Lambda API.

All AWS CLIs and SDKs have supported monitoring Lambda function states transitions since the original announcement in 2019. Infrastructure as code tools such as AWS CloudFormation, AWS SAM, Serverless Framework, Hashicorp Terraform (AWS Provider version >=3.41.0), and Cloud Custodian (>=0.9.14.0) also already support states. Customers using these tools do not need to take any action as part of this, except for one recommended service role policy change for AWS CloudFormation customers (see Updating CloudFormation’s service role below).

However, there are some customers using SDK-based automation workflows, or calling Lambda’s service APIs directly, that must update those workflows for this change. To allow time for testing this change, we are rolling it out in a phased model, much like the initial rollout for VPC attached functions. We encourage all customers to take this opportunity to move to the latest SDKs and tools available.

Nothing is changing about how functions are created, updated, or operate as part of this. However, this change may impact certain workflows that attempt to invoke or modify a function shortly after a create or an update action. Before making API calls to a function that was recently created or modified, confirm it is first in the Active state, and that the LastUpdateStatus is Successful.

For a full explanation of both the create and update lifecycles, see Tracking the state of AWS Lambda functions. 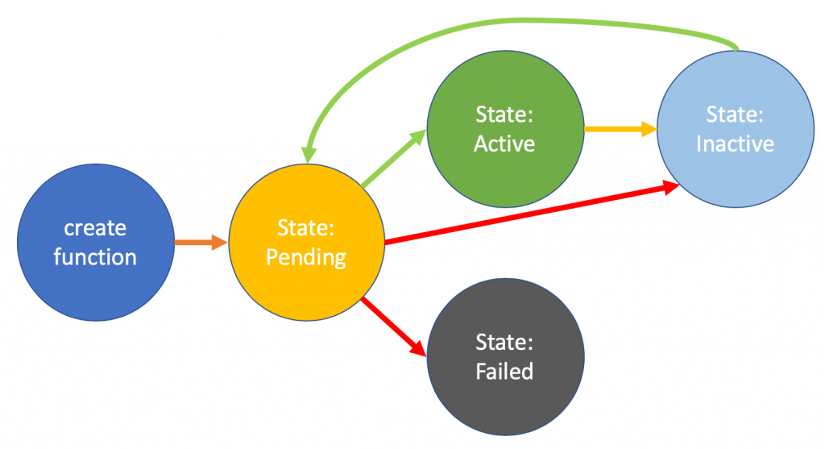 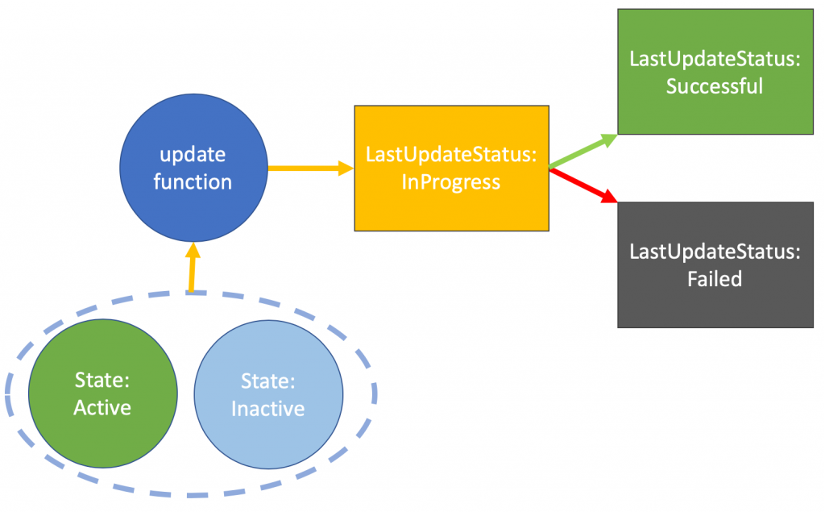 We are rolling out this change over a multiple phase period, starting with the Begin Testing phase today, July 12, 2021. The phases allow you to update tooling for deploying and managing Lambda functions to account for this change. By the end of the update timeline, all accounts transition to using the create/update Lambda lifecycle.

July 12 2021– Begin Testing: You can now begin testing and updating any deployment or management tools you have to account for the upcoming lifecycle change. You can also use this time to update your function configuration to delay the change until the End of Delayed Update.

This mechanism operates on a function-by-function basis, so you can test and experiment individually without impacting your whole account. Once the General Update phase begins, all functions in an account that do not have the delayed update mechanism in place see the new lifecycle for their functions.

Both mechanisms work by adding a special string in the “Description” parameter of Lambda functions. You can add this string anywhere in this parameter. You can opt to add it to the prefix or suffix, or set the entire contents of the field. This parameter is processed at create or update in accordance with the requested action.

To delay the update:

NOTE: Delay configuration mechanism has no impact after the end of the Delayed Update.

Here is how this looks in the console:

I add the opt-in configuration to my function’s Description. You can find this under Configuration -> General Configuration in the Lambda console. Choose Edit to change the value. 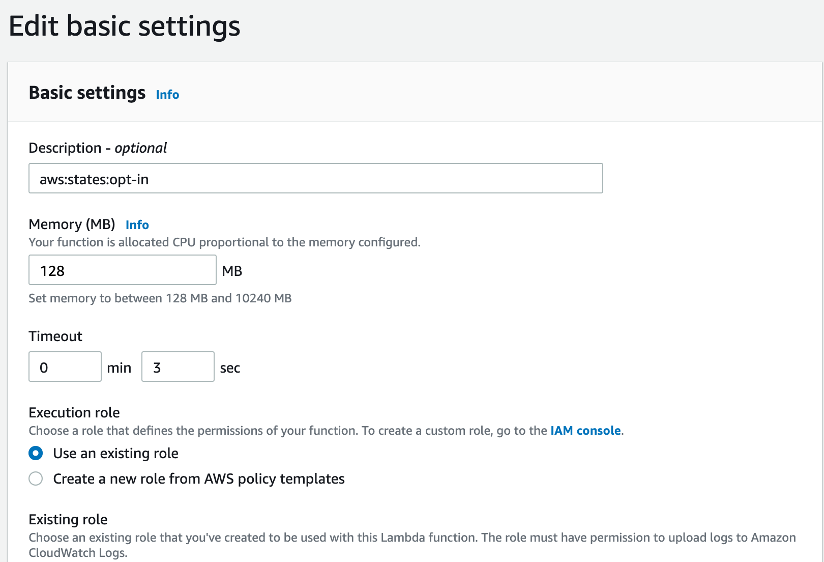 After choosing Save, you can see the value in the console:

Once the opt-in is set for a function, then updates on that function go through the preceding update flow.

With this in place, you can now test your development workflow ahead of the General Update phase. Download the latest AWS CLI (version 2.2.18 or greater) or SDKs to see function state and related attribute information.

You can confirm the current state of a function using the AWS APIs or AWS CLI to perform the GetFunction or GetFunctionConfiguration API or command for a specified function:

This returns the State and LastUpdateStatus in order for a function.

As part of the rollout of function states for all functions, we recommend that customers configure CloudFormation service roles with an Allow for the “lambda:GetFunction” API. This API allows CloudFormation to get the current state of a function, which is required to assist in the creation and deployment of functions.

With function states, you can have better clarity on how the resources required by your Lambda function are being created. This change does not impact the way that functions are invoked or how your code is run. While this is a minor change to when resources are created for your Lambda function, the result is even better consistency of working with the service.