However, some organizations have limits on how many AD groups they can create. For example, an organization might need to keep its AD group hierarchy reasonably flat and avoid a deep nesting of groups. Such a situation needs a solution that doesn’t require you to create exponentially more AD groups while still allowing you to use access control and automated user integration.

In this blog post, I provide step-by-step instructions for integrating AWS Identity and Access Management (IAM) with Microsoft Active Directory Federation Services (AD FS) by using AD user attributes, allowing you to establish federated access without expanding your total number of AD groups. Your organization’s enterprise administrator probably has existing processes in place for managing AD group memberships and provisioning, and you can extend these processes to the management of AD user attributes and the reduction of your organization’s dependency on AD groups.

After you satisfy these prerequisites, you can proceed to the next section of this post to configure your AD users and AD FS server.

To benefit fully from the solution in this post, your AD and AD FS environment should look similar to what is shown in the following diagram. I focus this post on AD users and claim rules in an AD FS server. AD FS claim rules provide the logic to identify who has been correctly set up in AD with the appropriate user attributes to sign in via AD FS to the AWS Management Console. 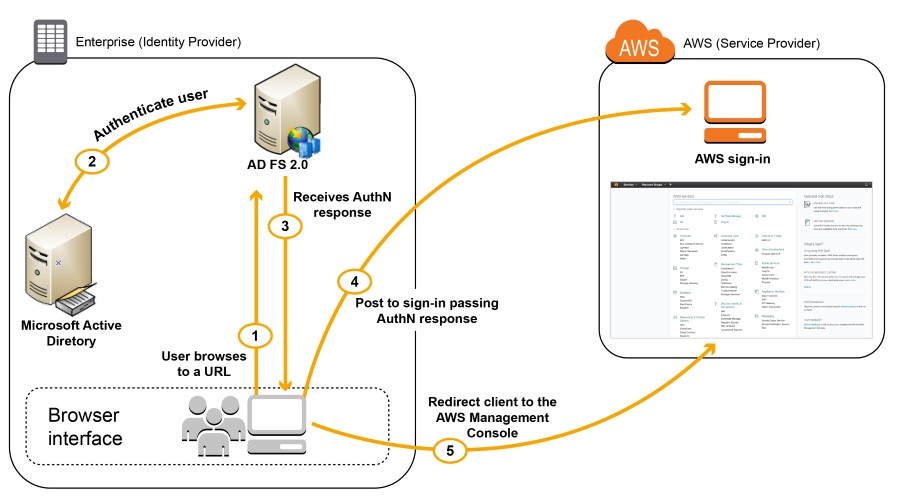 In the preceding diagram:

Because the AD user attributes hold all the associated AWS account and role information when using this solution, you will start by configuring an AD user’s accounts.

To edit the user attributes in an AD user’s account: 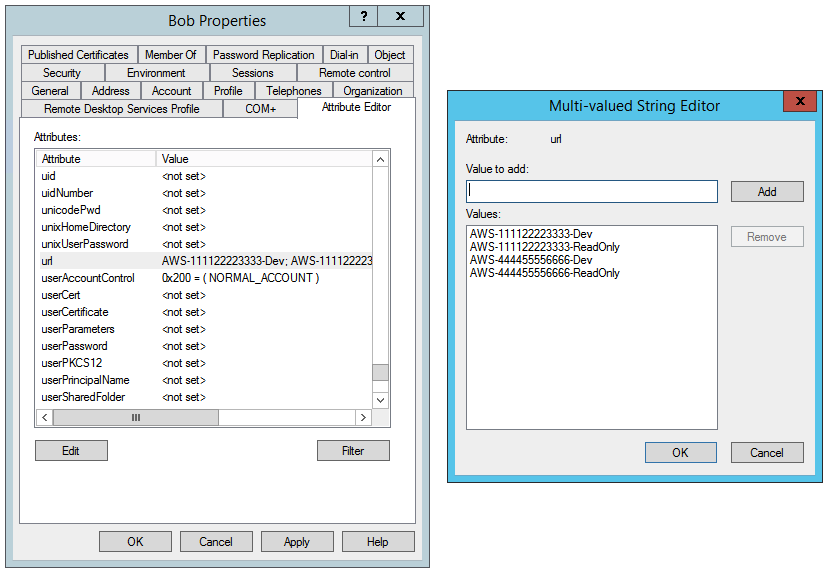 Now that you have configured Bob’s account, you will configure the AD FS server claim rules.

Because this blog post assumes your environment is already up and running and to ensure that you can follow along, I am providing example Windows PowerShell code that you can run on your AD FS server. This code allows you to choose a conventional approach by using AD groups in AD FS claim rules, or for the purposes of this post, to use AD FS claim rules with AD user attributes. If you use the AD group approach on your AD FS server with the example code, your AD group naming convention must be: AWS-YourAccountNumber–YourRoleName. If you have already created claim rules for AWS on your AD FS server, I encourage you to run this code against a different AD FS server that has no existing AWS rules.

About these four claim rules:

At the beginning of this post, I mentioned that you need to remember the name of the IdP you created in your AWS account, and now is when you will use your IdP’s name. Replace myADFS, highlighted in the following code, with the name of your IdP. (When modifying the rules, be careful not to insert any additional spaces because they can cause claim rules to not work as designed.)

Go to the AD FS sign-in page (https://Fully.Qualified.Domain.Name.Here/adfs/ls/IdpInitiatedSignOn.aspx) to test Bob’s federated access. Note that you might see a certificate warning if the server uses a locally self-signed certificate from Internet Information Services.

You can now see Bob’s email address used in the role session name. If you have enabled CloudTrail, the role session name is captured in CloudTrail and allows you to easily identify who assumed the role. If Bob wants to switch to a different account or role, he can return to his AD FS sign-in page (https://Fully.Qualified.Domain.Name.Here/adfs/ls/IdpInitiatedSignOn.aspx) and choose an alternative account or role.

If you have comments about this blog post, submit them in the “Comments” section below. If you have implementation or troubleshooting questions, start a new thread on the IAM forum.