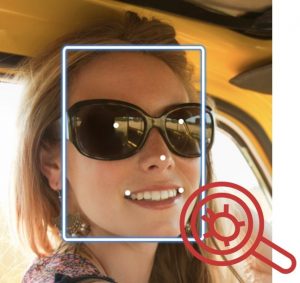 Facial recognition is an important tool for identifying a person. Facial recognition systems are already popular worldwide and are used to prevent fraud, particularly in financial institutions such as banks and insurance companies.

Although facial recognition systems are relatively new, counterfeiters have already developed ways to bypass them including impersonation, or with the use of masks, photos, or videos. These counterfeiting attacks can weaken facial recognition to authenticate or authorize payments. However, this flaw in recognition systems can be overcome by liveness detection. Our approach to performing liveness detection is by challenging (nose movement), and responding using AWS services such as Amazon Rekognition, Amazon API Gateway, AWS Lambda and Amazon DynamoDB.

For example, in the new Instant Payment System (PIX) of the Brazilian Central Bank (BACEN), biometric recognition, including facial recognition, is allowed as an option to authorize payments and transactions. Security validations may include requesting offline authentication when generating the QR Code, such as the use of biometrics.  Adding the liveness detection step improves the mitigation and prevention of fraud in this type of financial operation.

The  overall benefit of the AWS liveness detection solution is to improve the level of security while maintaining a high level of user experience in a complete frictionless flow.  The following article describes the what, why, and how to achieve this in further detail.

What is liveness detection?

Liveness detection is any technique used to detect a spoof attempt by determining whether the source of a biometric sample is a live human being or a fake representation. This is accomplished through algorithms, that analyze data collected from sensors/cameras to determine whether the source is live or reproduced.

There are two main categories of liveness detection:

The importance of distinction in modern society has been strengthened by the need for large-scale identity management systems whose functionality depends on the accurate deduction of an individual’s identity on the framework of financial institutions applications.

Some examples of these applications include performing remote financial transactions or on-boarding a new user/member/participant. One of the main challenges faced by banks is connected with fraud prevention and avoiding possible data/money losses, including through digital access channels. Nowadays, financial institutions are particularly focused on avoiding unauthorized access to customer bank accounts.

Below are other reasons that support the use of biometric (facial) recognition associated with liveness detection:

Where could this solution be applied?

Liveness detection can be applied in a broad range of situations where authentication and authorization are required for any financial institution.  These include:

The advantages of a liveness detection solution for financial institutions include:

Facial biometrics methods take into account multiple points on the face during the identification process. Most of them can be divided into 2D (two dimensions) and 3D (3 dimensions) solutions:

The 2D solution takes into account the height and width of the face during the process of identifying and measuring the nodal points of the face (distance between the eyes or nose-mouth, etc.). Depends on the cooperation of the user, who must look directly at the camera (mobile phone or notebook) so that it captures its image and makes the recognition.

The 3D solution captures the topography of the face in detail. As in the 2D system, the image is transformed into a biometric code, a kind of unique facial signature. Does not require the individual to be standing looking at the camera for recognition to be made.

Our liveness detection solution uses 30 facial landmarks, captured via Amazon Rekognition (DetectFaces operation). This makes it possible to capture the movement of the nose and rotation of the head.

The task of the nose movement is accomplished with a square on the screen, which appears in a random way, in which the customer/user must associate the tip of the nose within the square once.

DetectFaces operation returns the following information for each detected face:

You can use the combination of the BoundingBox and Pose data to draw the bounding box around faces that your application displays.

By default, the DetectFaces API returns only the following five facial attributes: BoundingBox, Confidence, Pose, Quality and landmarks. The default landmarks returned are: eyeLeft, eyeRight, nose, mouthLeft, and mouthRight (5). To get all the facial landmarks (30) depicted in the illustration below in the response, you must invoke the API specifying the attributes parameter with value ALL. 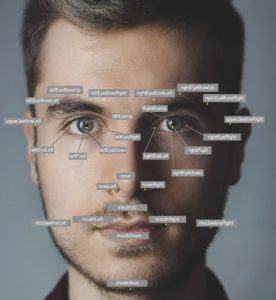 The serverless architecture below is a possible solution to detect life in a payment authentication and authorization process, for example, using an app on a cell phone or a computer.

The table below describes each component of the architecture:

A mobile application could be developed to allow users to access the liveness detection challenge provided by the architecture above.

The challenge would fail for a couple of reasons such as:

In this blog post (part 1 of 2), we showed an architecture to create a liveness detection solution, in order to complement facial recognition. It can be used in the process of authentication and authorization, combining only AWS services, such as Amazon Rekognition, Amazon API Gateway, AWS Lambda and Amazon DynamoDB.. Additionally, you can enhance the security factor by chaining other challenges based on their document numbers (through Amazon Textract) and other additional Multi-Factor Authentication (Amazon Cognito).

The starting point of building the solution was to attend a growing demand from the majority of financial institutions in the Latin American region. For this reason, both the web and mobile solutions are under construction. This is being accomplished as a cross-sectional work between the AWS R&D Innovation LATAM team and the Solution Architect focused on financial Services (LATAM).