Today, we are happy to announce that Java and .NET support inside the AWS Cloud Development Kit (AWS CDK) (CDK) is now generally available. The AWS CDK is an open-source software development framework to model and provision your cloud application resources through AWS CloudFormation. AWS CDK also offers support for TypeScript and Python.

With the AWS CDK, you can design, compose, and share your own custom resources that incorporate your unique requirements. For example, you can use the AWS CDK to model a VPC, with its associated routing and security configurations. You could then wrap that code into a construct and then share it with the rest of your organization. In this way, you can start to build up libraries of these constructs that you can use to standardize the way your organization creates AWS resources.

I like that by using the AWS CDK, you can build your application, including the infrastructure, in your favorite IDE, using the same programming language that you use for your application code. As you code your AWS CDK model in either .NET or Java, you get productivity benefits like code completion and inline documentation, which make it faster to model your infrastructure.

How the AWS CDK Works
Everything in the AWS CDK is a construct. You can think of constructs as cloud components that can represent architectures of any complexity: a single resource, such as a Amazon Simple Storage Service (Amazon S3) bucket or a Amazon Simple Notification Service (SNS) topic, a static website, or even a complex, multi-stack application that spans multiple AWS accounts and regions. You compose constructs together into stacks that you can deploy into an AWS environment, and apps – a collection of one or more stacks.

To get started, I need to install the AWS CDK command-line interface using NPM. Once this download completes, I can code my infrastructure in either TypeScript, Python, JavaScript, Java, or, .NET.

On my local machine, I create a new folder and navigate into it.

Now I have installed the CLI I can execute commands such as cdk init and pass a language switch, in this instance, I am using .NET, and the sample app with the csharp language switch.

If I wanted to use Java rather than .NET, I would change the --language switch to java.

Since I am in the terminal, I type code . which is a shortcut to open the current folder in VS Code. You could, of course, use any editor, such as Visual Studio or JetBrains Rider. As you can see below, the init command has created a basic .NET AWS CDK project. 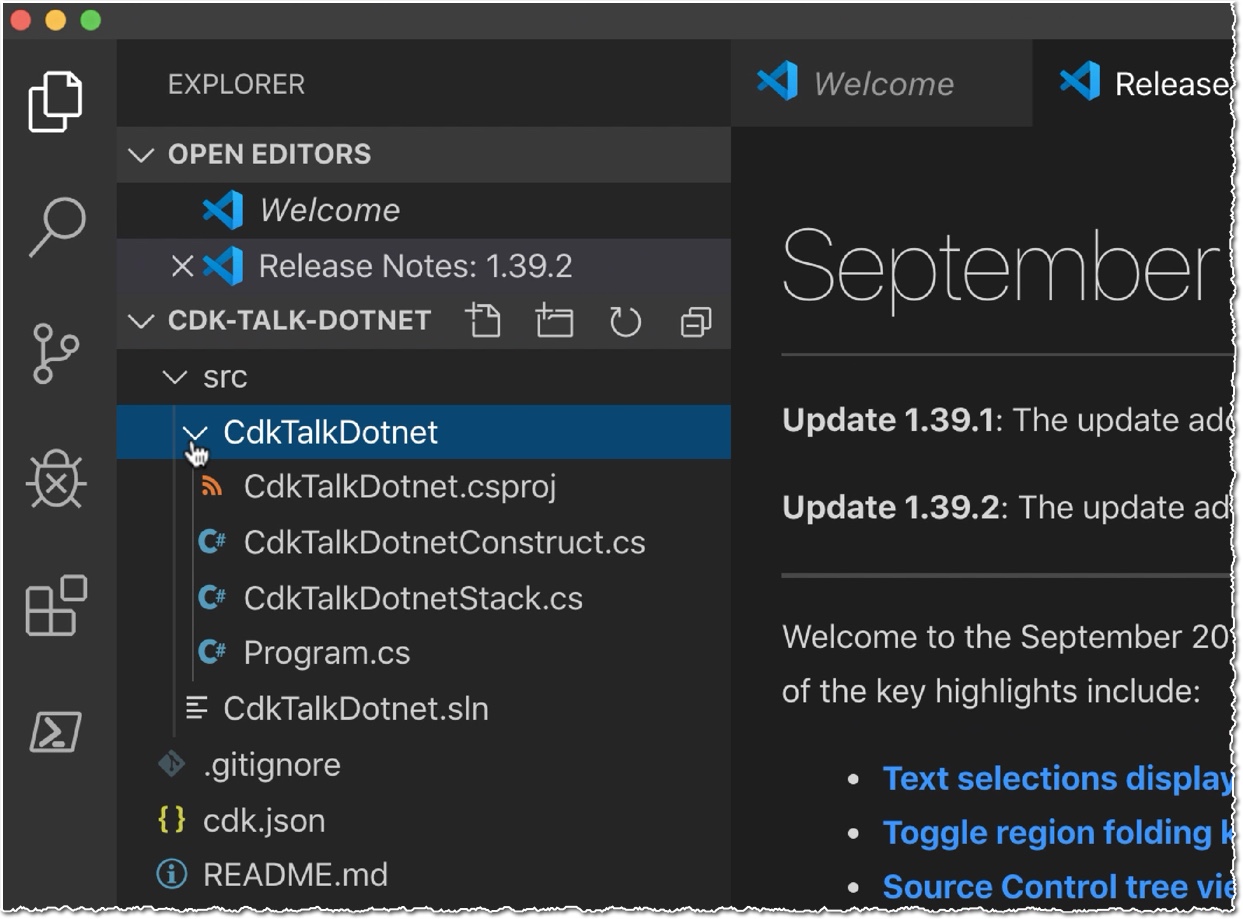 If I look into the Program.cs, the Main void creates an App and then a CDKDotnetStack. This stack CDKDotnetStack is defined in the CDKDotnetStack.cs file. This is where the meat of the project resides and where all the AWS resources are defined. 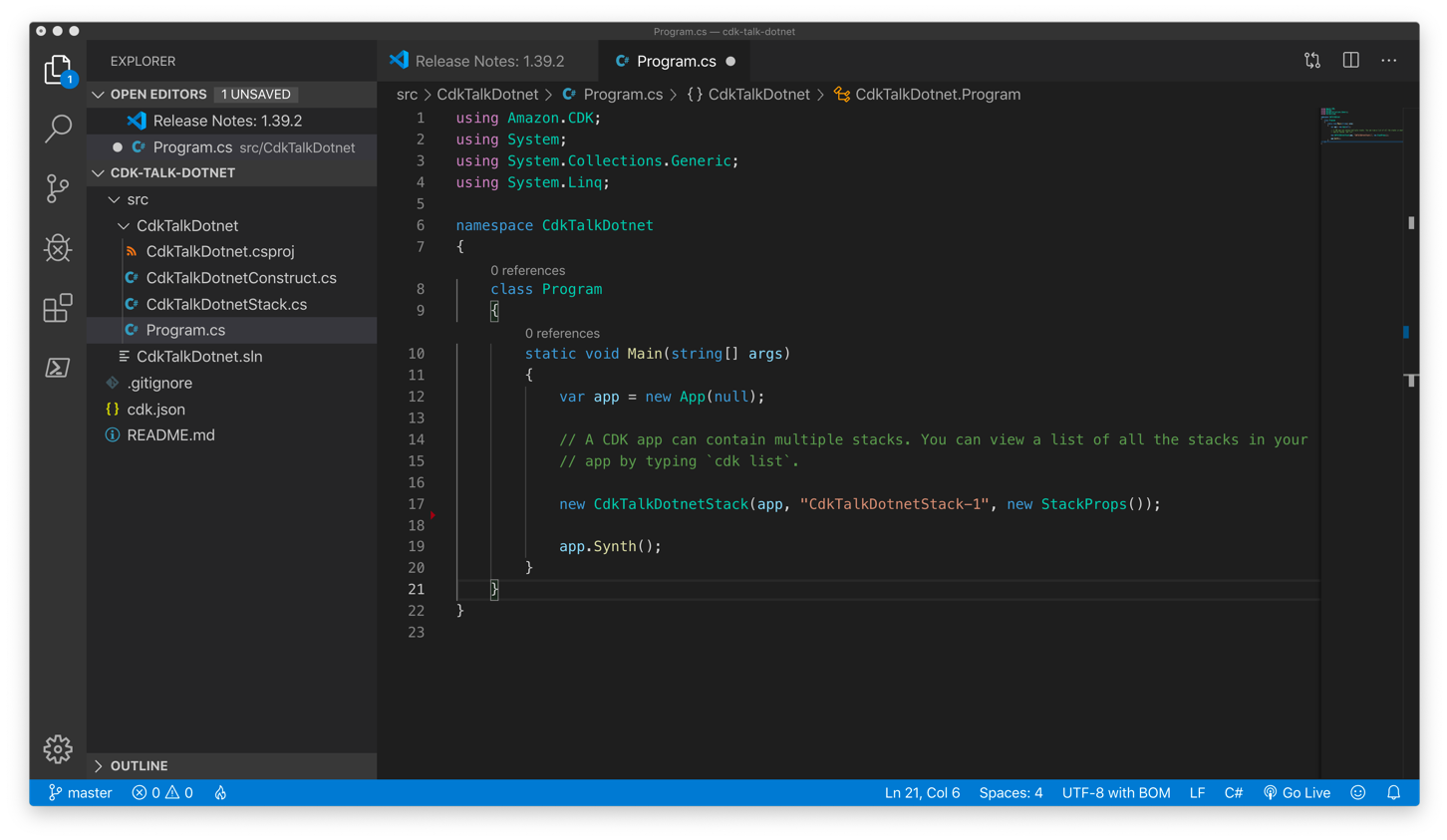 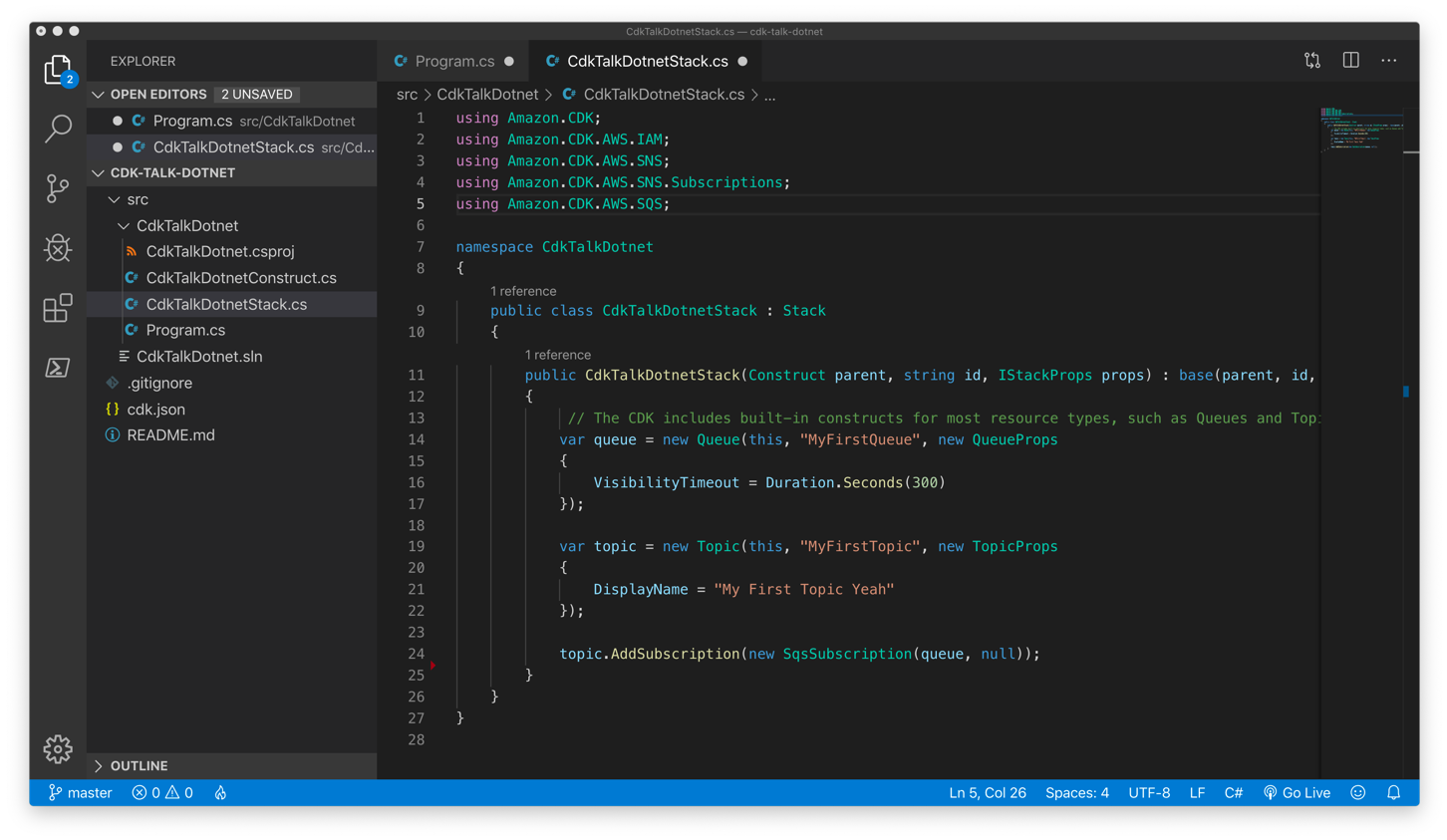 Now that I have written the code, the next step is to deploy it. When I do, the AWS CDK will compile and execute this project, converting my .NET code into a AWS CloudFormation template. 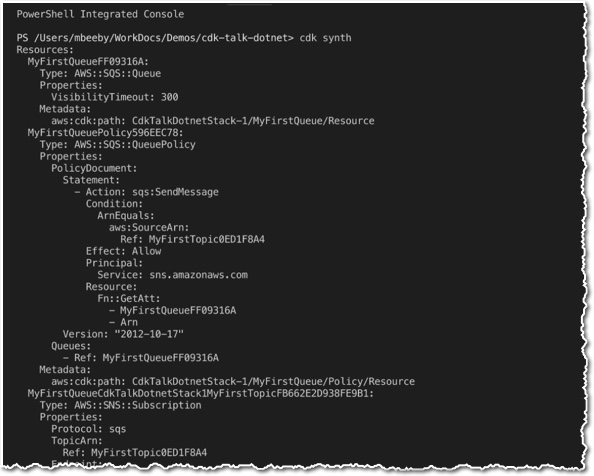 This is just standard CloudFormation, if you look through it, you will find the following items:

Before I deploy this project to my AWS account, I will use cdk bootstrap. The bootstrap command will create a Amazon Simple Storage Service (Amazon S3) bucket for me, which will be used by the AWS CDK to store any assets that might be required during deployment. In this example, I am not using any assets, so technically, I could skip this step. However, it is good practice to bootstrap your environment from the start, so you don’t get deployment errors later if you choose to use assets. 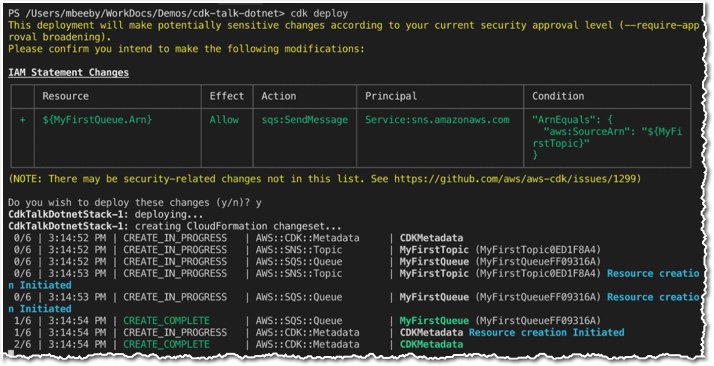 This command first creates the AWS CloudFormation template then deploys it into my account. Since my project will make a security change, it asks me if I wish to deploy these changes. I select yes, and a CloudFormation changeset is created, and my resources start building. 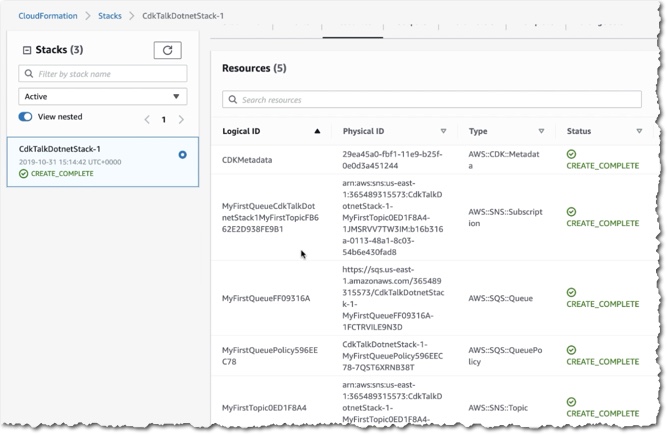 That’s it, my resources have been successfully built in the cloud, all using .NET.

With the addition of Java and .NET, the AWS CDK now supports 5 programming languages in total, giving you more options in how you build your AWS resources. Why not install the AWS CDK today and give it a try in whichever language is your favorite?