According to a report published by Slice Intelligence, Amazon accounted for 74% of all US consumer e-commerce on Prime Day 2016. This one-day only global shopping event, exclusively for Amazon Prime members saw record-high levels of traffic including double the number of orders on the Amazon Mobile App compared to Prime Day 2015. Members around the world purchased more than 2 million toys, more than 1 million pairs of shoes and more than 90,000 TVs in one day (see Amazon’s Prime Day is the Biggest Day Ever for more stats). An event of this scale requires infrastructure that can easily scale up to match the surge in traffic. 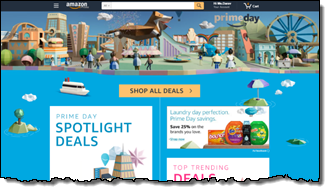 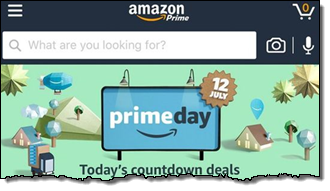 Scaling AWS-Style
The Amazon retail site uses a fleet of EC2 instances to handle web traffic. To serve the massive increase in customer traffic for Prime Day, the Amazon retail team increased the size of their EC2 fleet, adding capacity that was equal to all of AWS and Amazon.com back in 2009. Resources were drawn from multiple AWS regions around the world.

The morning of July 11th was cool and a few morning clouds blanketed Amazon’s Seattle headquarters. As 8 AM approached, the Amazon retail team was ready for the first of 10 global Prime Day launches. Across the Pacific, it was almost midnight. In Japan, mobile phones, tablets, and laptops glowed in anticipation of Prime Day deals. As traffic began to surge in Japan, CloudWatch metrics reflected the rising fleet utilization as CloudFront endpoints and ElastiCache nodes lit up with high-velocity mobile and web requests. This wave of traffic then circled the globe, arriving in Europe and the US over the course of 40 hours and generating 85 billion clickstream log entries. Orders surpassed Prime Day 2015 by more than 60% worldwide and more than 50% in the US alone. On the mobile side, more than one million customers downloaded and used the Amazon Mobile App for the first time.

As part of Prime Day, Amazon.com saw a significant uptick in their use of 38 different AWS services including:

To further illustrate the scale of Prime Day and the opportunity for other AWS customers to host similar large-scale, single-day events, let’s look at Prime Day through the lens of several AWS services:

Running the Amazon website and mobile app on AWS makes short-term, large scale global events like Prime Day technically feasible and economically viable. When I joined Amazon.com back in 2002 (before the site moved to AWS), preparation for the holiday shopping season involved a lot of planning, budgeting, and expensive hardware acquisition. This hardware helped to accommodate the increased traffic, but the acquisition process meant that Amazon.com sat on unused and lightly utilized hardware after the traffic subsided. AWS enables customers to add the capacity required to power big events like Prime Day, and enables this capacity to be acquired in a much more elastic, cost-effective manner. All of the undifferentiated heavy lifting required to create an online event at this scale is now handled by AWS so the Amazon retail team can focus on delivering the best possible experience for its customers.

Lessons Learned
The Amazon retail team was happy that Prime Day was over, and ready for some rest, but they shared some of what they learned with me:

As I mentioned before, nothing is stopping you from envisioning and implementing an event of this scale and scope!

I would encourage you to think big, and to make good use of our support plans and services. Our Solutions Architects and Technical Account Managers are ready to help, as are our APN Consulting Partners. If you are planning for a large-scale one-time event, give us a heads-up and we’ll work with you before and during the event.

PS – What did you buy on Prime Day?