I Love My Amazon WorkSpace!

Early last year my colleague Steve Mueller stopped by my office to tell me about an internal pilot program that he thought would be of interest to me. He explained that they were getting ready to run Amazon WorkSpaces on the Amazon network and offered to get me on the waiting list. Of course, being someone that likes to live on the bleeding edge, I accepted his offer.

Getting Started
Shortly thereafter I started to run the WorkSpaces client on my office desktop, a fairly well-equipped PC with two screens and plenty of memory. At that time I used the desktop during the working day and a separate laptop when I was traveling or working from home. Even though I used Amazon WorkDocs to share my files between the two environments, switching between them caused some friction. I had distinct sets of browser tabs, bookmarks, and the like. No matter how much I tried, I could never manage to keep the configurations of my productivity apps in sync across the environments.

After using the WorkSpace at the office for a couple of weeks, I realized that it was just as fast and responsive as my desktop. Over that time, I made the WorkSpace into my principal working environment and slowly severed my ties to my once trusty desktop. 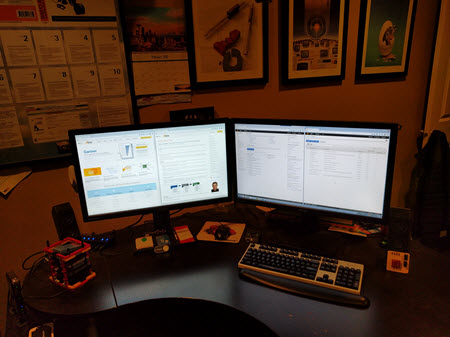 I work from home two or three days per week. My home desktop has two large screens, lots of memory, a top-notch mechanical keyboard, and runs Ubuntu Linux. I run VirtualBox and Windows 7 on top of Linux. In other words, I have a fast, pixel-rich environment.

Once I was comfortable with my office WorkSpace, I installed the client at home and started using it there. This was a giant leap forward and a great light bulb moment for me. I was now able to use my fast, pixel-rich home environment to access my working environment.

At this point you are probably thinking that the combination of client virtualization and server virtualization must be slow, laggy, or less responsive than a local device. That’s just not true! I am an incredibly demanding user. I pound on the keyboard at a rapid-fire clip, I keep tons of windows open, alt-tab between them like a ferret, and I am absolutely intolerant of systems that get in my way.  My WorkSpace is fast and responsive and makes me even more productive.

Move to Zero Client
A few months in to my WorkSpaces journey, Steve IM’ed me to talked about his plan to make some Zero Client devices available to members of the pilot program. I liked what he told me and I agreed to participate. He and his sidekick Michael Garza set me up with a Dell Zero Client and two shiny new monitors that had been taking up space under Steve’s desk. At this point my office desktop had no further value to me. I unplugged it, saluted it for its meritorious service, and carried it over to the hardware return shelf in our copy room.  I was now all-in, and totally dependent on, my WorkSpace and my Zero Client.

The Zero Client is a small, quiet device. It has no fans and no internal storage. It simply connects to the local peripherals (displays, keyboard, mouse, speakers, and audio headset) and to the network. It produces little heat and draws far less power than a full desktop.

During this time I was also doing quite a bit of domestic and international travel. I began to log in to my WorkSpace from the road. Once I did this, I realized that I now had something really cool—a single, unified working environment that spanned my office, my home, and my laptop. I had one set of files and one set of apps and I could get to them from any of my devices. I now have a portable desktop that I can get to from just about anywhere.

The fact that I was using a remote WorkSpace instead of local compute power faded in to the background pretty quickly. One morning I sent the team an email with the provocative title “My WorkSpace has Disappeared!” They read it in a panic, only to realize that I had punked them, and that I was simply letting them know that I was able to focus on my work, and not on my WorkSpace. I did report a few bugs to them,  none of which were serious, and all of which were addressed really quickly.

Dead Laptop
The reality of my transition became apparent late last year when the hard drive in my laptop failed one morning. I took it in to our IT helpdesk and they replaced the drive. Then I went back up to my office, reinstalled the WorkSpaces client, and kept on going. I installed no other apps and didn’t copy any files. At this point the only personal items on my laptop are the registration code for the WorkSpace and my stickers! I do still run PowerPoint locally, since you can never know what kind of connectivity will be available at a conference or a corporate presentation.

I also began to notice something else that made WorkSpaces different and better. Because laptops are portable and fragile, we all tend to think of the information stored on them as transient. In the dark recesses of our minds we know that one day something bad will happen and we will lose the laptop and its contents. Moving to WorkSpaces takes this worry away. I know that my files are stored in the cloud and that losing my laptop would be essentially inconsequential.

It Just Works
To borrow a phrase from my colleague James Hamilton, WorkSpaces just works. It looks, feels, and behaves just like a local desktop would.

Like I said before, I am demanding user. I have two big monitors, run lots of productivity apps, and keep far too many browser windows and tabs open. I also do things that have not been a great fit for virtual desktops up until now. For example:

Image Editing – I capture and edit all of the screen shots for this blog (thank you, Snagit).

Audio Editing – I use Audacity to edit the AWS Podcasts. This year I plan to use the new audio-in support to record podcasts on my WorkSpace.

Music – I installed the Amazon Music player and listen to my favorite tunes while blogging.

Because the WorkSpace is running on Amazon’s network, I can download large files without regard to local speed limitations or bandwidth caps. Here’s a representative speed test (via Bandwidth Place): 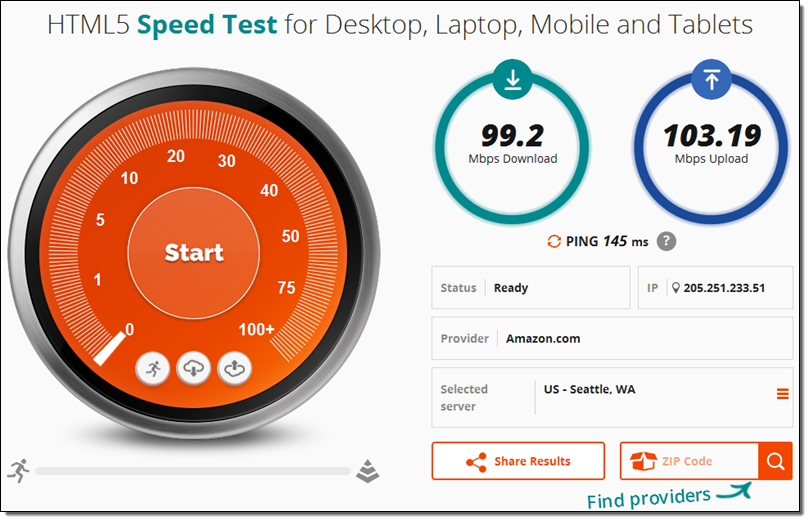 Sense of Permanence
We transitioned from our pilot WorkSpaces to our production environment late last year and are now provisioning WorkSpaces for many members of the AWS team. My WorkSpace is now my portable desktop.

After having used WorkSpaces for well over a year, I have to report that the biggest difference between it and a local environment isn’t technical. Instead, it simply feels different (and better).  There’s a strong sense of permanence—my WorkSpace is my environment, regardless of where I happen to be. When I log in, my environment is always as I left it. I don’t have to wait for email to sync or patches to install, as I did when I would open up my laptop after it had been off for a week or two.

Now With Tagging
As enterprises continue to evaluate, adopt, and deploy WorkSpaces in large numbers, they have asked us for the ability to track usage for cost allocation purposes. In many cases they would like to see which WorkSpaces are being used by each department and/or project. Today we are launching support for tagging of WorkSpaces. The WorkSpaces administrator can now assign up to 10 tags (key/value pairs) to each WorkSpace using the AWS Management Console, AWS Command Line Interface (CLI), or the WorkSpaces API. Once tagged, the costs are visible in the AWS Cost Allocation Report where they can be sliced and diced as needed for reporting purposes.

Here’s how the WorkSpaces administrator can use the Console to manage the tags for a WorkSpace: 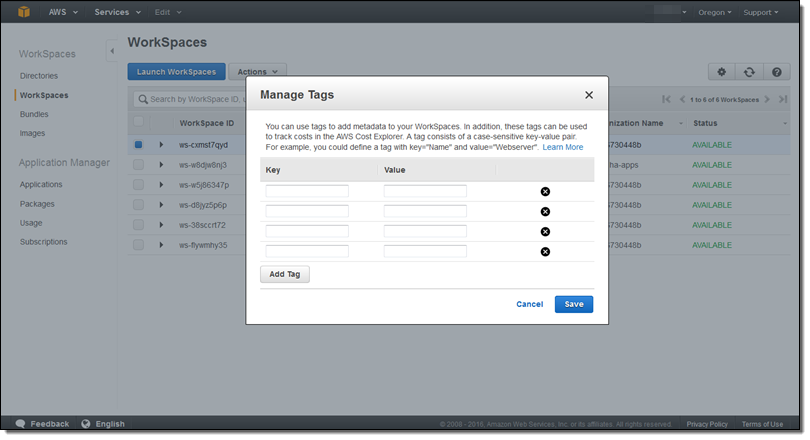 Learning More
If you have found my journey compelling and would like to learn more, here are some resources to get you started:

Request a Demo
If you and your organization could benefit from Amazon WorkSpaces and would like to learn more, please get in touch with our team at workspaces-feedback@amazon.com.