Are you familiar with the Internet of Things (IoT) concept? Compact, low-cost, Internet-connected devices are now embedded in cars, buildings, factories, appliances, and so forth. The devices collect light, weight, temperature, humidity, vibration, location, or pressure data and then forward it to another location for storage, processing, analysis, and action.

New Challenges
The low-cost nature of the devices and the value that they can bring to consumers, manufacturers, forecasters, and governments all but guarantees that there will be millions or billions of them deployed in the coming years.

Of course, the existence large numbers of devices pumping out continuous streams of data creates an interest set of challenges; this is an area where you can make use of everything that you know about Big Data.

Data storage efficiency is paramount, since there’s a lot of it. Each data point is of modest value; the value emerges only after aggregation, processing, and detailed analysis. Fortunately, the AWS cloud makes a great host for IoT applications. Route the incoming data stream to Amazon Kinesis, store the raw data in Amazon Simple Storage Service (Amazon S3) or Amazon DynamoDB, and then do detailed analysis using Amazon Redshift.

IoT HackDay at re:Invent
In order to prepare developers for the new challenges brought about by  the emergence of IoT, we conducted our first-ever IoT Hackday at AWS re:Invent. The teams used Intel Edison and Spark Core devices and all sorts of sensors to build cloud-powered IoT devices. Check out my brief interview with Jinesh Varia to learn more.

Here’s a picture from the event: 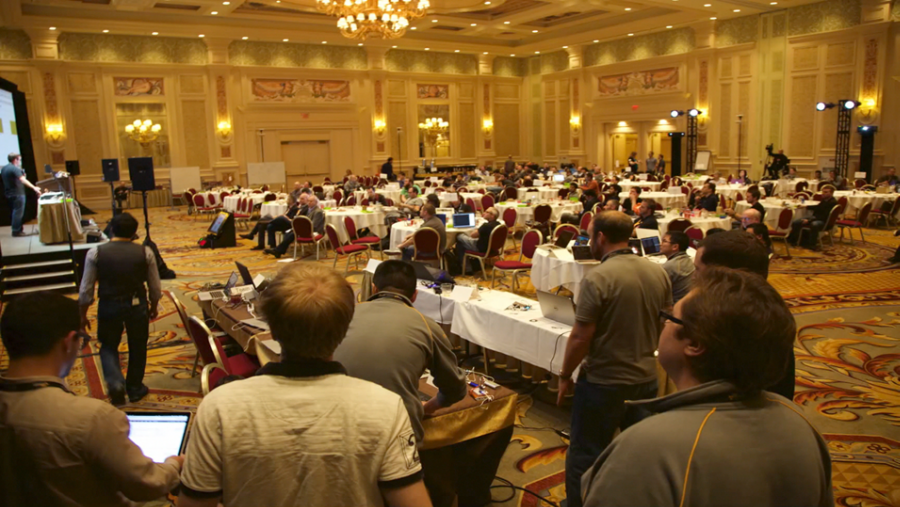 With support from our friends at Intel and Spark, 238 developers assembled into 52 teams and spent 16 hours learning how to build their very own IoT applications.

To learn how to connect and interact with AWS Cloud services from these devices, every team built the HelloWorld for AWS-IoT – The Connected Maraca – a device that when shaken sends data to Amazon Kinesis, authenticates via Amazon Cognito and stores data in Amazon DynamoDB. We were fascinated to see that all the teams built the connected maraca in less than an hour and started sending data to AWS.

Leaderboards and dashboards on the screen kept score and made for a fun and entertaining environment.  Later, developers and hackers leveraged the “Sensor Bar” and used innovative sensors such as NFC, Infrared emitters, innovative LEDs, ultrasonic sensors to design and build their own dream machine. Over 18 teams presented their finished devices and applications. We were fascinated by the innovation and impressed by how quickly hackers were able to build these devices using the AWS Cloud resources.

It was fascinating to watch as the hackers built all sorts of innovative connected devices in less than 10 hours. This ranged from some real-world innovation like game controllers, climate control devices, smart house management products, a flood detection device, a real-time road traffic Analyzer, basement and backyard monitors to some funny but useful smart devices like a stall patrol for your office restroom and the self-explanatory “No More Empty Beer Mugs.”

At the end of the HackDay, 3 winners (Don’t Panic!, SenseiGrow, and Smarthouse) were selected! Here’s a video of the hackers and the winners: 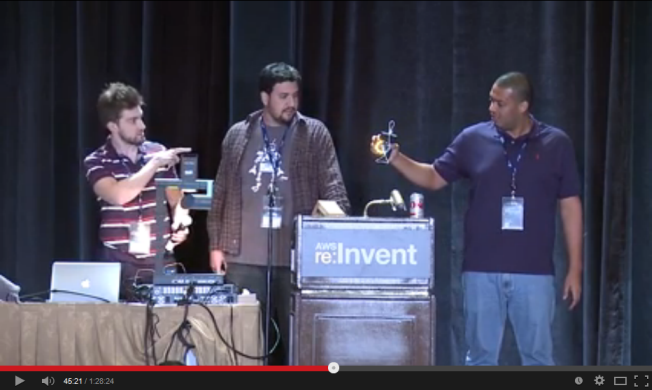 IoT Hack Series at the AWS Pop-up Loft
In order to help even more developers to build IoT applications, we will be running a series of Hack Days at the AWS Pop-up Loft in San Francisco. Once a month, developers will have the opportunity to participate in an eight hour (10 AM to 6 PM) bootcamp that will make use of the materials that we developed for re:Invent. The first event takes place on Tuesday, February 17th and the second on Friday, March 13th. If you would like to attend one of these free (but space-limited) Hack Days events, please register now.