It is always interesting to zoom in on the history of a single AWS service or feature and watch how it has evolved over time in response to customer feedback. For example, Amazon Elastic Block Store (EBS) launched a decade ago and has been gaining more features and functionality every since. Here are a few of the most significant announcements:

Several of the items that I chose to highlight above make EBS snapshots more useful and more flexible. As you may already know, it is easy to create snapshots. Each snapshot is a point-in-time copy of the blocks that have changed since the previous snapshot, with automatic management to ensure that only the data unique to a snapshot is removed when it is deleted. This incremental model reduces your costs and minimizes the time needed to create a snapshot.

Because snapshots are so easy to create and use, our customers create a lot of them, and make great use of tags to categorize, organize, and manage them. Going back to my list, you can see that we have added multiple tagging features over the years.

It turns out that many of our customers have invested in tools to automate the creation of snapshots, but have skimped on the retention and deletion. Sooner or later they receive a surprisingly large AWS bill and find that their scripts are not working as expected. The Data Lifecycle Manager should help them to save money and to be able to rest assured that their snapshots are being managed as expected.

Creating and Using a Lifecycle Policy
Data Lifecycle Manager uses lifecycle policies to figure out when to run, which volumes to snapshot, and how long to keep the snapshots around. You can create the policies in the AWS Management Console, from the AWS Command Line Interface (CLI) or via the Data Lifecycle Manager APIs; I’ll use the Console today. Here are my EBS volumes, all suitably tagged with a department: 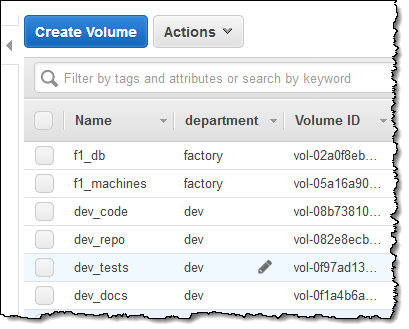 I access the Lifecycle Manager from the Elastic Block Store section of the menu: 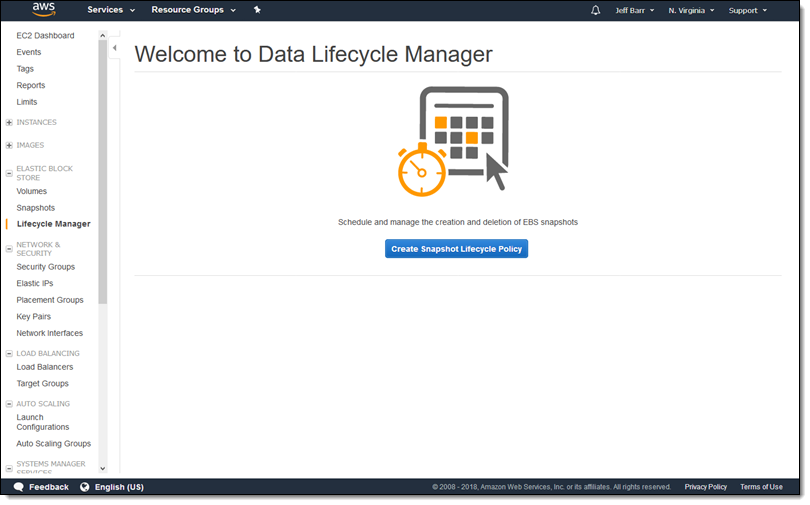 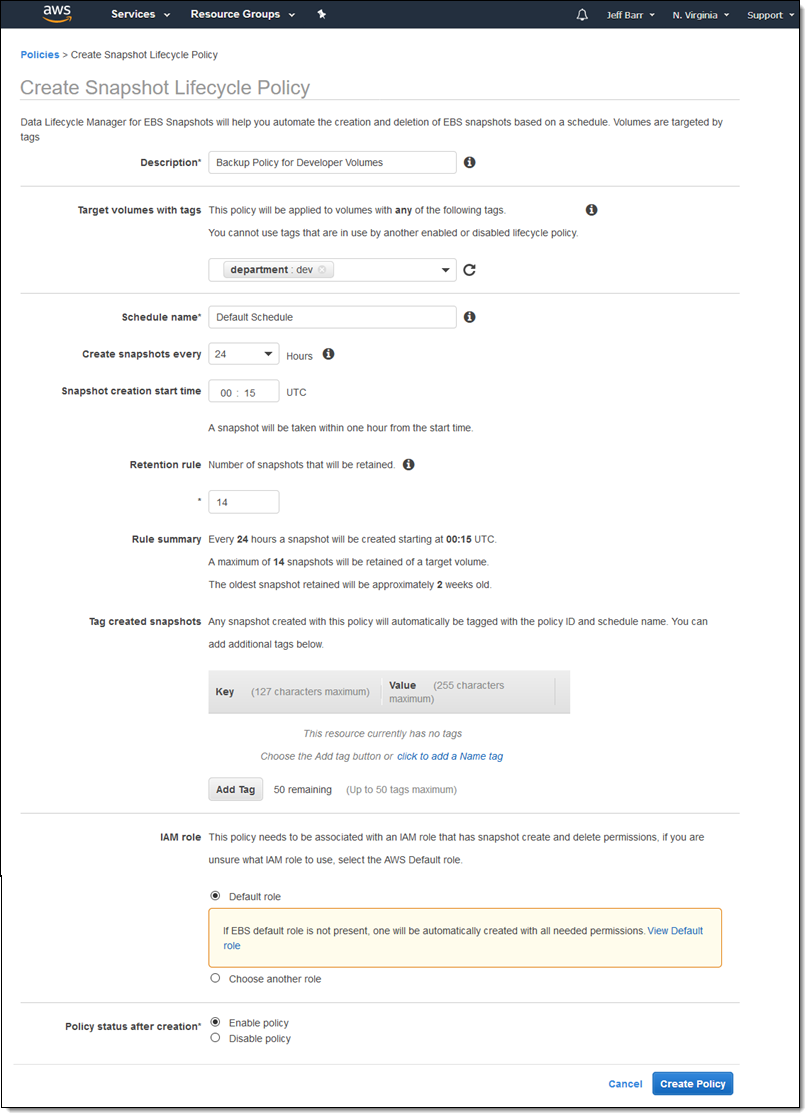 I can create snapshots at 12 or 24 hour intervals, and I can specify the desired snapshot time. Snapshot creation will start no more than an hour after this time, with completion based on the size of the volume and the degree of change since the last snapshot.

I can use the built-in default IAM role or I can create one of my own. If I use my own role, I need to enable the EC2 snapshot operations and all of the DLM (Data Lifecycle Manager) operations; read the docs to learn more.

I can see all of my policies at a glance: 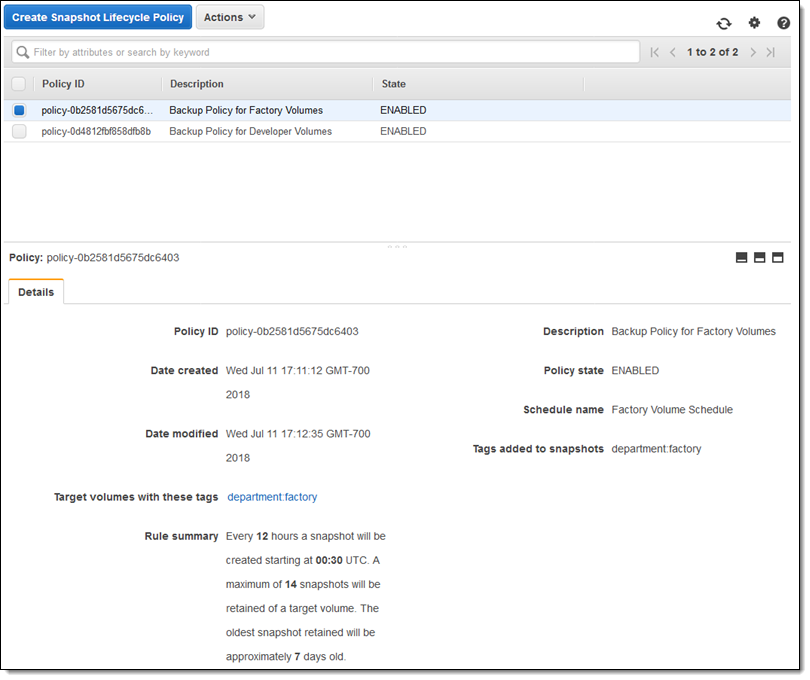 I took a short break and came back to find that the first set of snapshots had been created, as expected (I configured the console to show the two tags created on the snapshots):

Things to Know
Here are a couple of things to keep in mind when you start to use Data Lifecycle Manager to automate your snapshot management:

Pricing – You can create and use Data Lifecyle Manager policies at no charge; you pay the usual storage charges for the EBS snapshots that it creates.

Availability – Data Lifecycle Manager is available in the US East (N. Virginia), US West (Oregon), and Europe (Ireland) Regions.

Tags and Policies – If a volume has more than one tag and the tags match multiple policies, each policy will create a separate snapshot and both policies will govern the retention. No two policies can specify the same key/value pair for a tag.

Programmatic Access – You can create and manage policies programmatically! Take a look at the CreateLifecyclePolicy, GetLifecyclePolicies, and UpdateLifeCyclePolicy functions to get started. You can also write an AWS Lambda function in response to the createSnapshot event.

In the Works – As you might have guessed from the name, we plan to add support for additional AWS data sources over time. We also plan to support policies that will let you do weekly and monthly snapshots, and also expect to give you additional scheduling flexibility.