Read Replica Scaling – Support for adding or removing read replica nodes to a Redis Cluster, along with a reduction of up to 40% in cluster creation time.

FedRAMP Authorized and Available in AWS GovCloud (US) – United States government customers and their partners can use ElastiCache for Redis to process and store their FedRAMP systems and data for mission-critical, high-impact workloads in the AWS GovCloud (US) Region, and at moderate impact level in the other AWS Regions in the US. To learn more, read the ElastiCache for Redis Compliance documentation.

In-Place Upgrades – Support for upgrading a Redis Cluster to a newer engine version in-place and while maintaining availability except for a failover period measured in seconds.

New Instance Types – Support for the use of M5 and R5 instances, with significant performance improvements.

5.0 Compatibility
Today I am happy to announce Redis 5.0 compatibility to Amazon ElastiCache for Redis. This version of Redis includes support for a new Streams data type and new commands (ZPOPMIN and ZPOPMAX) for use on Sorted Sets, and also does a better job of defragmenting memory. To learn more, read What’s New in Redis 5?

As usual, you can use the ElastiCache Console, CLI, APIs, or a CloudFormation template to get started. I’ll use the Console, with the following settings: 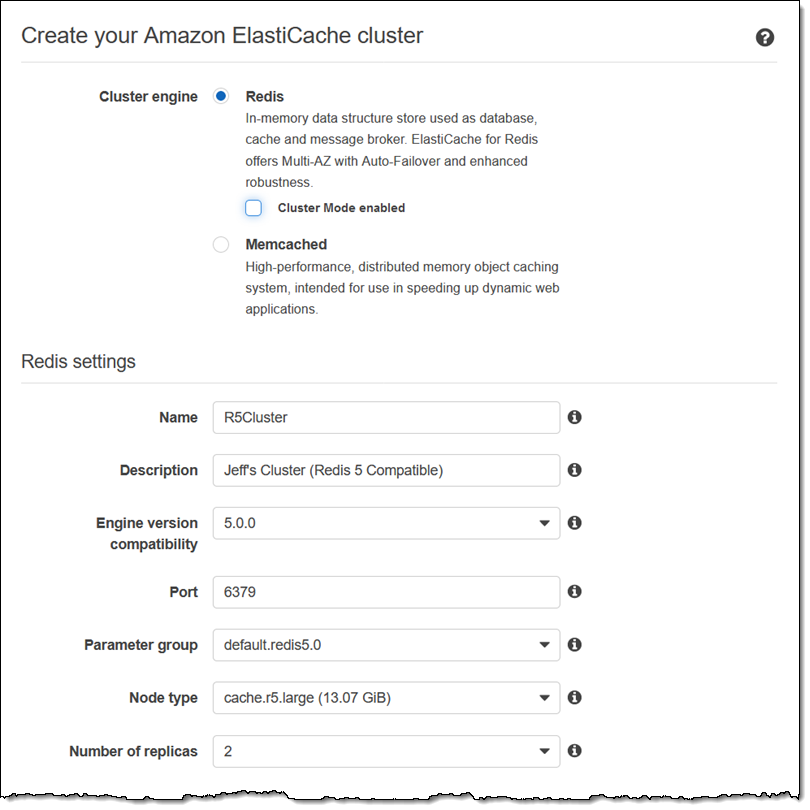 My cluster is up and running within minutes:

I can also use the in-place upgrade feature that I mentioned earlier on my existing 4.0-compatible cluster. I select the cluster, click Modify, and the 5.0-compatible engine is already selected. I confirm the other settings and click Modify to proceed:

Streams in Action
The new Stream data type is very powerful! Each Stream has a name, and can be created by simply referencing it as part of an XADD command. Let’s say that I have a long-running process that generates files that need to be scanned and validated. For testing purposes, I can add a bunch of files to a stream name Files from the shell like this:

I can retrieve values starting from the beginning of the stream using the command XREAD BLOCK 1000 STREAMS Files 0: 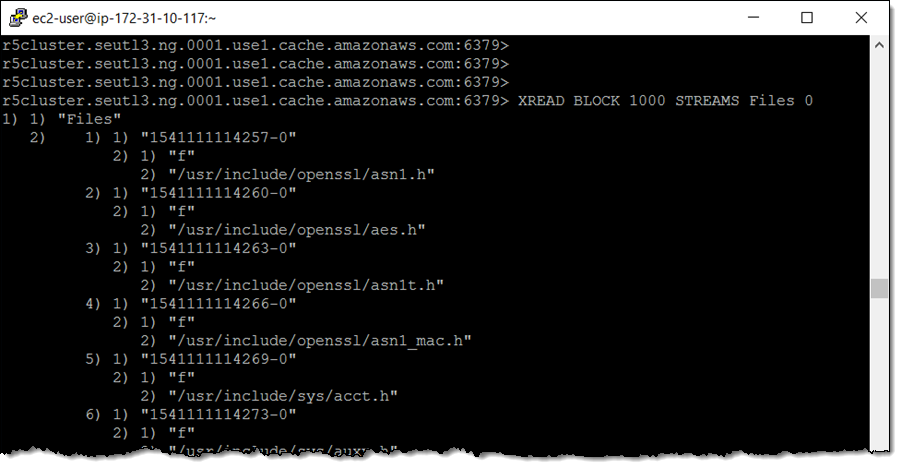 I can also read the values that are after a given ID:

In most cases, I would be doing the reads and the writes from code rather than from the command line, of course. This is a very simple example of the power of Redis 5 Streams and I am sure that you can do better!