This is a guest post from ZS. In their own words, “ZS is a professional services firm that works closely with companies to help develop and deliver products and solutions that drive customer value and company results. ZS engagements involve a blend of technology, consulting, analytics, and operations, and are targeted toward improving the commercial experience for clients.”

This blog is about the approaches evaluated and eventually chosen for ZS’s cloud transformation journey specifically for adoption of Amazon Redshift from prior Teradata based data warehousing solution.

ZS, a professional services firm that works side by side with companies to help develop and deliver products that drive customer value and company results. We leverage our extensive industry expertise, leading-edge analytics, technology and strategies to create solutions that work in the real world. With more than 35 years of experience and over 7,500 ZS employees in 24 offices worldwide, we are passionately committed to helping companies and their customers thrive.

ZS used Teradata as the primary data warehouse solution for several years. Part due to high ownership and operating cost, we started looking for an optimal solution which could provide scaling flexibility, lower maintenance liability and access accelerated innovation in the industry. This was achievable through solutions hosted on a cloud platform like AWS which ZS has already been using for numerous business workloads over the years.

Following were the three key areas which were critical for our Teradata to Amazon Redshift migration planning.

AWS Schema Conversion Tool (SCT) helped in migrating table structures to Amazon Redshift, which converted the data types used for columns in Teradata tables into the corresponding Amazon Redshift data types. The AWS SCT tool also helped convert the table definition from Teradata to Amazon Redshift to include the appropriate keys, such as the Distribution Key/Sort Key. How to use the AWS SCT has been explained in the later sections of this blog

Teradata databases can hold a variety of database objects apart from tables like views, stored procedures, macros, User Defined Functions (UDF) and so on. The data types of the columns used in Teradata tables needed to be converted into the appropriate data types on Amazon Redshift. For other objects like views, stored procedures, the definitions from Teradata were exported and fresh objects were created in Amazon Redshift with appropriate changes in the new definitions. The AWS SCT can help in identifying the objects that need rework while migrating to Amazon Redshift.

Third and one of the major considerations was migrating the actual data to AWS. ZS’s use cases and isolation requirements were such that neither was Direct connect used in general nor were all AWS VPCs connected to corporate / on-premises network via VPN Tunnels. Data once exported out of Teradata gets uncompressed and expands approximately 4x resulting in requirement for data storage on local staging servers. Each ZS client workload had its respective warehouse on source and destination which also varied in size and had respective isolate change management timelines. Given these considerations we designed two use case specific approaches for transferring the exported data from the Teradata database to Amazon S3:

The following diagram illustrates this architecture

The amount of data that had to be exported from the Teradata systems was 100+ TB (compressed). When exported, this would potentially expand to 500+TB. We needed a solution that could export this scale efficiently. Staging such large data volumes before migrating to AWS was a challenge due to limited on-premises SAN storage capacity. The mitigation chosen was to export in batches such that the exported data could be moved away from the staging server in a rolling fashion thus keeping space available throughout the migration. For certain datasets, due to volumes we further re-compressed the exported data before migration to Amazon S3.

ZS had 150+ databases within our Teradata systems used across numerous ZS client initiatives. For certain projects, the data even had to be transferred to the client’s AWS account requiring respective unique processes while technology foundation was reusable. As alluded to earlier, due to varying dataset sizes per client workload, respective nuanced approaches were designed.

Initial approach for the solution

A cross functional team comprising of expertise across data warehousing, storage, network, cloud native technologies, business was formed at ZS which was also supported by AWS experts brought in via ZS’s AWS Partnership.

Primary focus at beginning was placed on finalizing data migration approaches. One such method that we tried was to use the AWS SCT to copy the schema onto Amazon Redshift and transfer the data to Amazon S3 using SCT Migration mode extract and upload. We also looked at file interface of AWS Snowball Edge to eliminate the need of having local storage for migration and directly exporting the Teradata exports on AWS Snowball Edge. 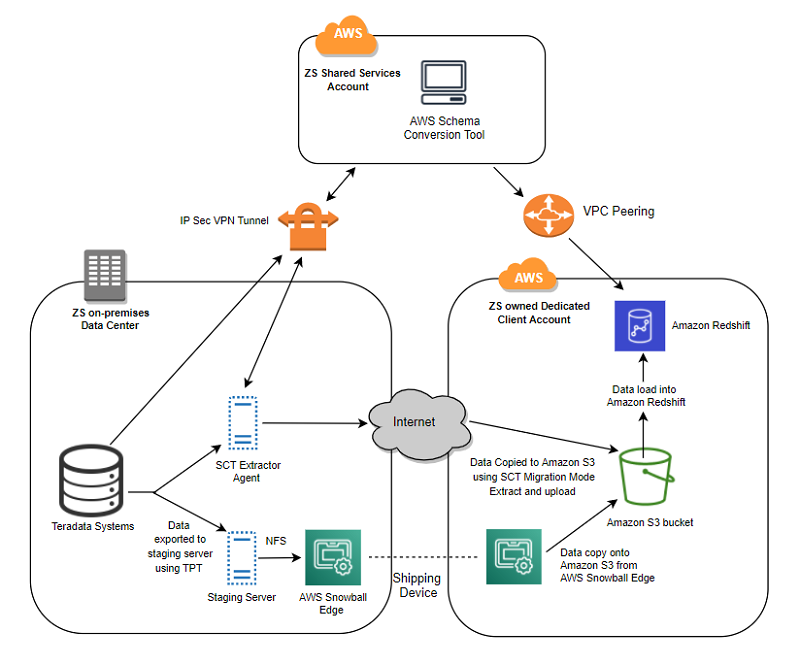 While choosing a final approach, we came across the following challenges:

Teradata Parallel Transporter (TPT) scripts were leveraged to export the data since it provided faster export speeds from Teradata servers compared to alternatives. We prepared the Teradata Parallel Transporter (TPT) scripts and launched these through Linux servers. Before starting the export, we had to ensure that enough free space was available on the server(s) to accommodate the export dumps.

The advantages of using TPT scripts to export data from Teradata tables were as follows:

The hybrid cloud architecture we zeroed in on is depicted in picture below comprising of ZS’s on-premises data center hosting Teradata appliance, AWS destination environments and intermediary staging as well as shipping and data transfer networks. AWS SCT was leveraged for Schema migration and TPT exports for the data migration. The TPT export scripts were executed on the staging servers and the data was exported onto shared storage which was attached to staging servers. After the exports were completed the data was copied to AWS S3 using either AWS CLI for S3 or was pushed to AWS Snowball depending on the data size. The Snowball device was configured within the same network as the staging servers to ensure optimal transfer latency. Once data was copied completely onto AWS Snowball, it was shipped to AWS where data was transferred into the corresponding Amazon S3 bucket. On the AWS side, we had the S3 bucket for the corresponding Amazon Redshift cluster that held the data before loading into it. 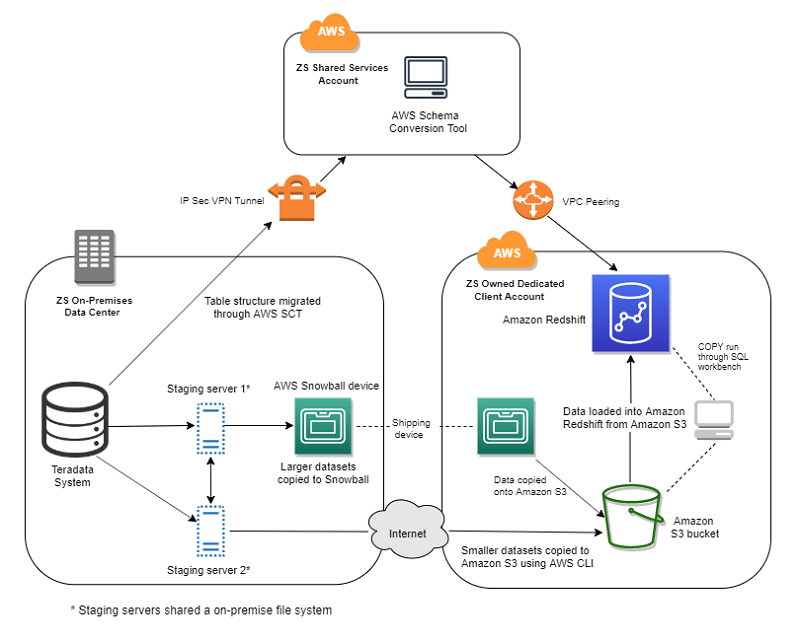 The TPT script is very effective when exporting huge amounts of data from the proprietary Teradata systems. You can prepare and deploy export scripts on a server within the same network as the Teradata appliance, which enables high export speeds.

The TPT export script is a combination of 1) Declaration section 2) Loop with built-in commands. Export dump with logs are generated as outputs.

The declaration section is where we initialize all the parameters, like the system identifier known as the tdpid, login user name, and delimiter that are used in the output files. See the following code that sets up shell variables:

The values for the required variables were passed from three input files:

The data exported from the Teradata system through the TPT scripts was placed on the staging server. To ensure the quality of the exported data, we verified that the record counts in the log file, created during the TPT export, matched with the table row counts.

The TPT scripts generated one file for every Teradata table. The file format of these files was text with the .dat extension. See the following screenshot.

You can optimize data loading into Amazon Redshift tables by splitting the corresponding file (dataset) into subsets of equal sizes. The number of such subsets should ideally be equal to or a multiple of the number of slices for the Amazon Redshift node type configured in the cluster. We chose to split the TPT output files using the Linux split command on the TPT server:

ZS leveraged AWS account level isolation for many of our client solutions to align with respective compliance controls. AWS Snowball is associated with a single AWS account, and to achieve full client data isolation, separate devices were shipped for each large use case. As indicated above, we adopted two methods to transfer the data based on the export size for each client workload:

Transferring data through the AWS CLI

Transferring the data via the AWS CLI includes the following steps:

To transfer the data with Snowball, complete the following steps:

To transfer the Teradata table structure to Amazon Redshift, complete the following steps: 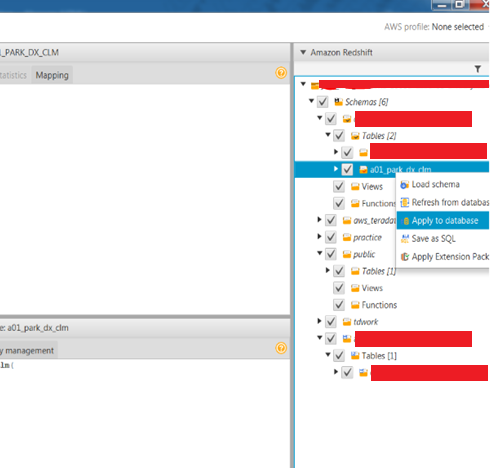 Pushing the data to the tables

After you migrate the required data to the appropriate S3 bucket, convert the tables as per usability, and apply the tables to Amazon Redshift, you can push the data to these tables via the COPY command:

The naming convention we used for the exported datasets was <databasename>.<tablename>. The table structures (DDLs) were migrated through AWS SCT and the table names matched the dataset names. Therefore, when we created the COPY commands, we simply had to match the target table name in Amazon Redshift with that of the datasets on Amazon S3. For more information about this process, see Using the COPY command to load from Amazon S3.

In this blog, we intended to convey our journey and options evaluated before zeroing on one to transform on-premise Teradata data warehouse workloads onto Amazon Redshift at scale. Process built around multiple tools including AWS SCT, Teradata Parallel Transporter, and AWS Snowball facilitated our transformation

Ajinkya Puranik is a Cloud Database Lead within Cloud Centre of Excellence at ZS Associates. He has years of experience managing, administrating, optimizing and adopting evolving data warehousing solutions. He played an instrumental role in ZS’s Teradata to Redshift transformation journey. His personal interests involve cricket and traveling.

Sushant Jadhav is a Senior Cloud Administrator within Cloud Center of Excellence at ZS Associates. He is a results-oriented professional with technology experience predominantly in the storage and backup industry. He has worked on many migration projects where he helped customers migrate from on-premises to AWS. Sushant enjoys working on all the AWS services and tries to bridge the gap between technology and business. He is always keen on learning new technologies and is always evolving in his role. Apart from work, he enjoys playing football.