Amazon Athena is a serverless and interactive query service that allows you to easily analyze your raw and processed datasets in Amazon Simple Storage Service (Amazon S3) using standard SQL. The JDBC and ODBC drivers that Athena provides allow you to easily integrate your data analytics tools (such as Microsoft Power BI, Tableau, or SQLWorkBench) with Athena seamlessly and gain insights about your data in minutes.

Before November 2018, you had to connect to Athena with ODBC or JDBC drivers using your IAM user or role credentials. However, with the November 20, 2018 release of support for Microsoft Active Directory Federation Services (ADFS 3.0) and Security Assertion Markup Language (SAML 2.0) in the Athena ODBC/JDBC driver, you can now connect to Athena directly using your Microsoft Active Directory (AD) credentials.

Microsoft ADFS 3.0, a component of Windows Server, supports SAML 2.0 and is integrated with AWS Identity and Authentication Management (IAM). This integration allows Active Directory (AD) users to federate to AWS using corporate directory credentials, such as username and password from Microsoft Active Directory.

This post walks you through configuring ADFS 3.0 on a Windows Server 2012 R2 Amazon Elastic Compute Cloud (Amazon EC2) instance and setting up trust between ADFS 3.0 IdP and AWS through SAML 2.0. The post then demonstrates how to install the Athena OBDC driver on Amazon Linux EC2 instance (RHEL instance) and configure it to use ADFS for authentication.

The following architecture diagram shows how an AD user in your organization is authenticated in the Athena ODBC/JDBC driver:

The process includes the following steps:

This post walks you through configuring ADFS-AWS trust through SAML and using that trust to federate AD users in the Athena JDBC/ODBC driver.

To implement this solution, you complete the following steps:

For this walkthrough, you need to have the following prerequisites:

To configure ADFS 3.0 on a Windows domain controller, you must have the following:

To configure a service account in your domain controller, you create a user in your active directory with the name ADFSSVC and add the user to the domain admins group.

You can now add user ADFSSVC to the domain admins group.

You receive a message that the user is added to the group, but should still verify it.

Now that you have installed the prerequisites for ADFS 3.0, you can install and configure ADFS 3.0 on Windows Server 2012 R2 EC2 instance. 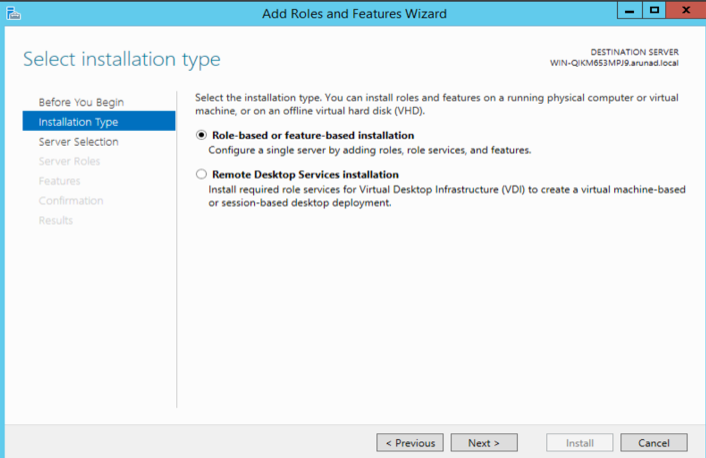 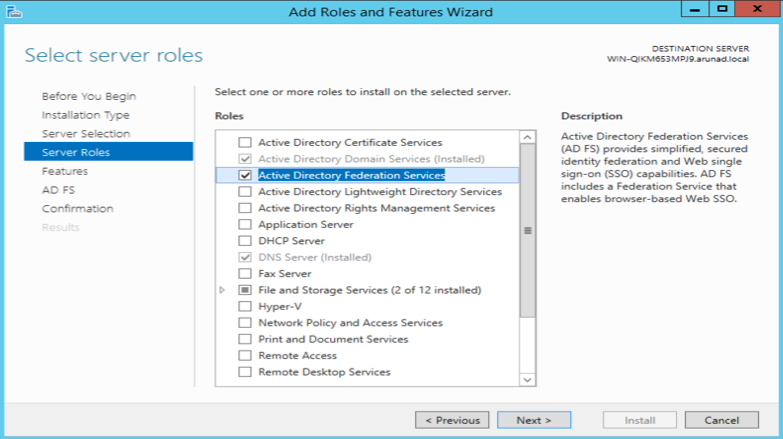 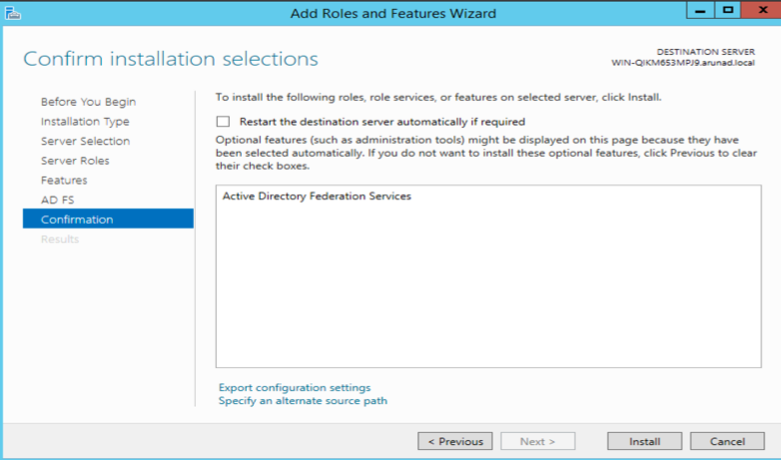 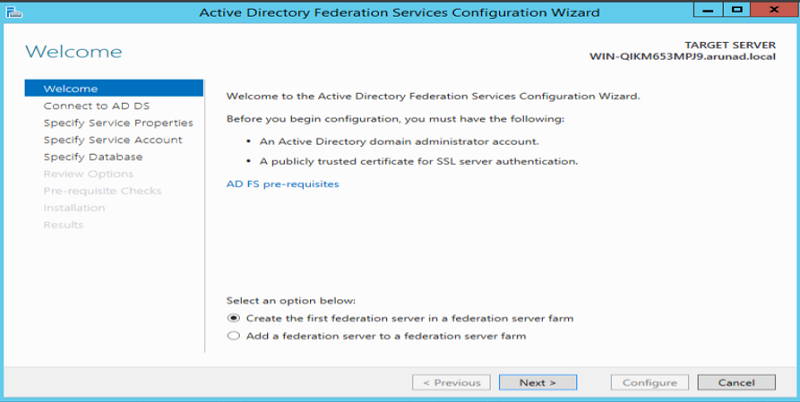 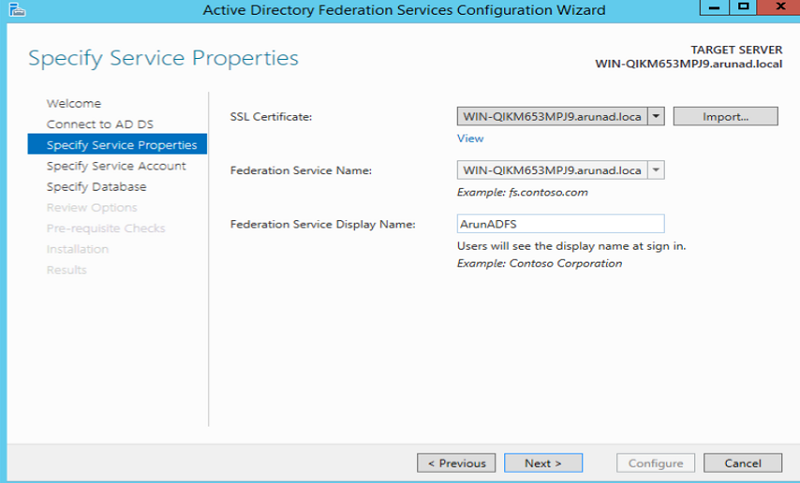 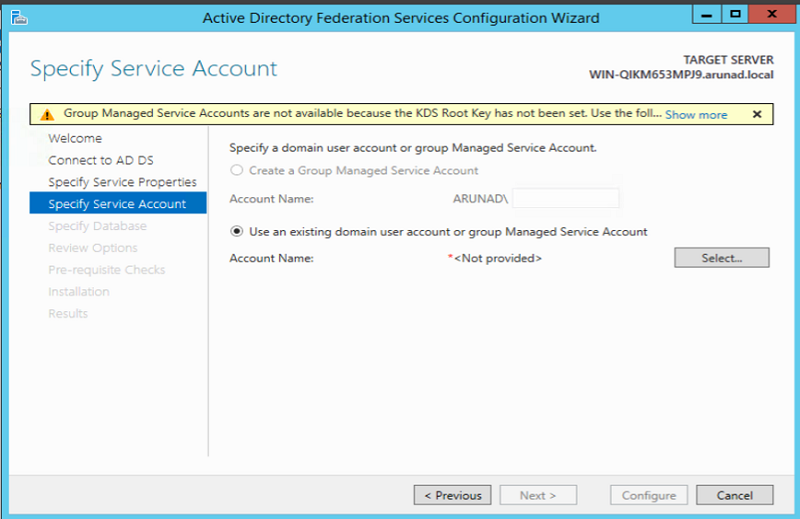 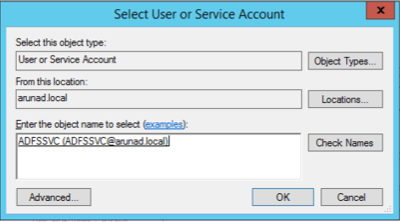 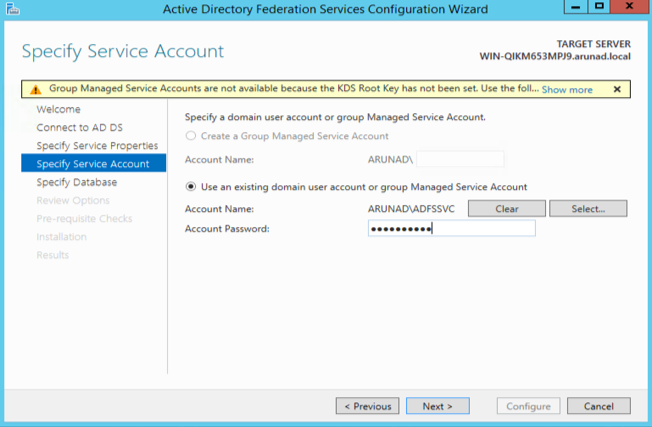 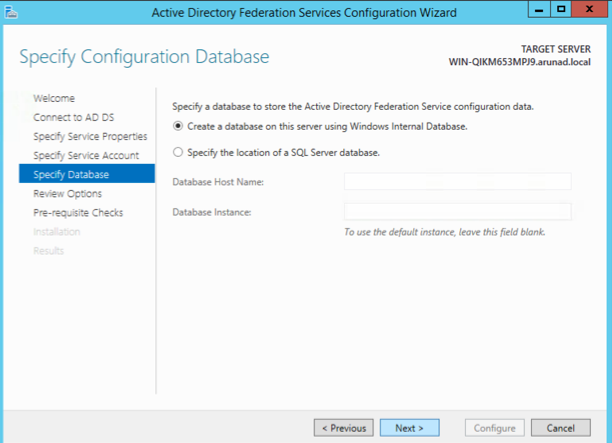 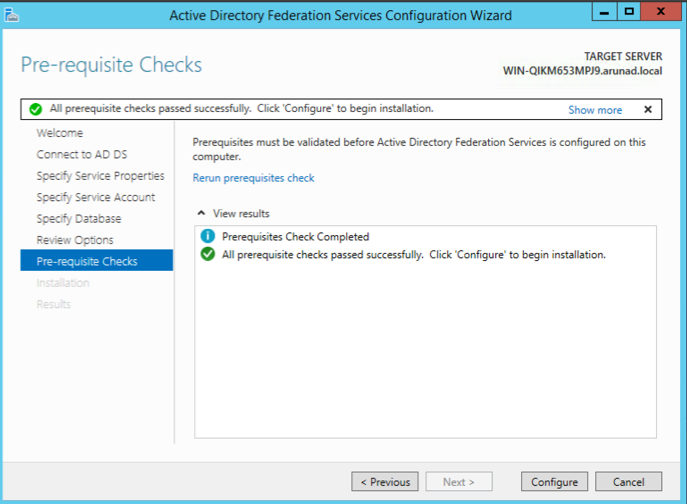 When the server is successfully configured, you may see the following warning message:

To fix the problem, run the following command by opening PowerShell as an administrator:

The following code shows the output.

The ADFS 3.0 configuration is now complete.

This file is required to set up trust between ADFS and AWS.

Alternatively, you can download the ADFS server’s federation XML file by running the following command as administrator in PowerShell 3.0+:

Copy the downloaded XML file on to your local machine so you can use it when creating a SAML-based role in IAM in the next step.

Now that you have configured the ADFS 3.0 on a Windows Server, you can establish the trust between AWS and the IdP (ADFS) via SAML assertion claim rules. By establishing this trust, users in your AD can federate into AWS using an IAM role and access AWS resources such as Athena or the AWS Glue Data Catalog.

Setting up this trust requires configuration in both AWS and Active Directory. For AWS, you set up IAM roles and establish a SAML provider. For Active Directory, you write the SAML assertion and claim rules.

Setting up your SAML provider in IAM

To set up your SAML provider, complete the following steps:

The role name you give in this step is crucial because any users and groups you create in Active Directory as part of establishing trust in the following steps are based on this name.

In this step, you configure the SAML assertion rules in your ADFS so that users can federate into AWS using the IAM role you created.

Determining how you create and delineate your AD groups and IAM roles in AWS is crucial in how you secure access to your account and manage resources. One approach for creating the AD groups that uniquely identify the IAM role mapping is by selecting a common group naming convention.

For this post, create a group in Active Directory with the naming convention AWS-<AccountID>-<IAMRolename>; for example, AWS-123456789012-ArunADFSTest.

This naming convention is extremely crucial in the next steps because you write SAML assertion claim rules where you fetch all the AD groups of your AD user that contain the string AWS-<AccountID>- in them and extract the last portion of the group name to map it with IAM role in AWS. For example, if the AD user that you’re authenticating to AWS is part of AD group AWS-123456789012-ArunADFSTest, then the claim rules, which you write later, find all groups of the AD user that match with string AWS-123456789012-, extract the last portion of the group name (ArunADFSTest), and send it as the role name to the AWS SAML endpoint in the format aws:arn::iam::<AccountID>: role/ArunADFSTest. 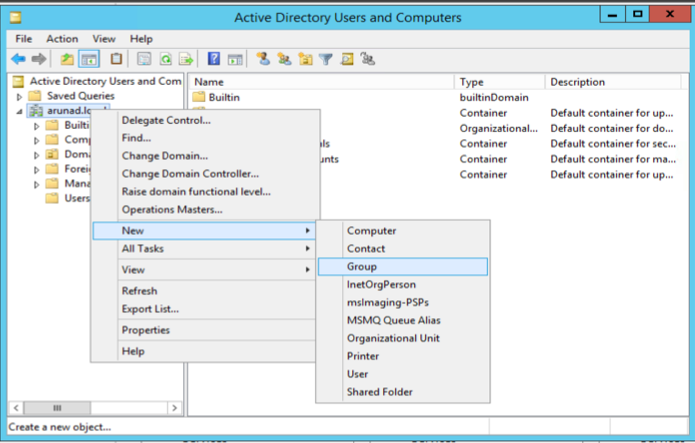 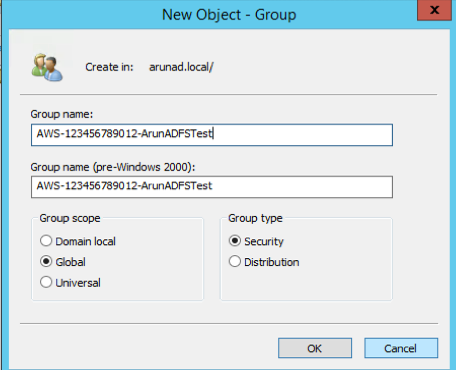 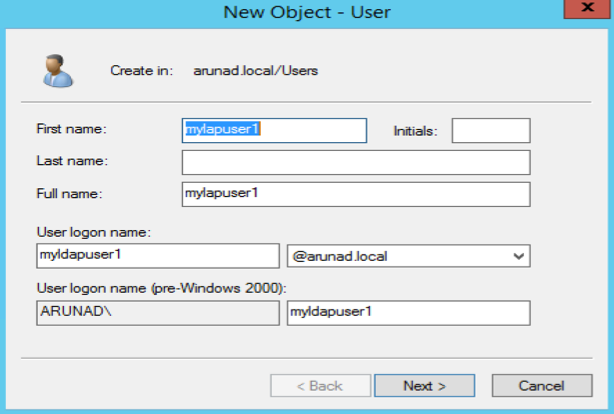 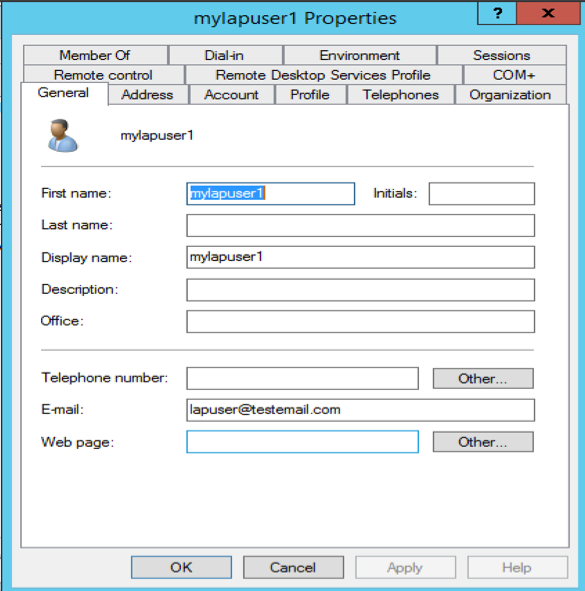 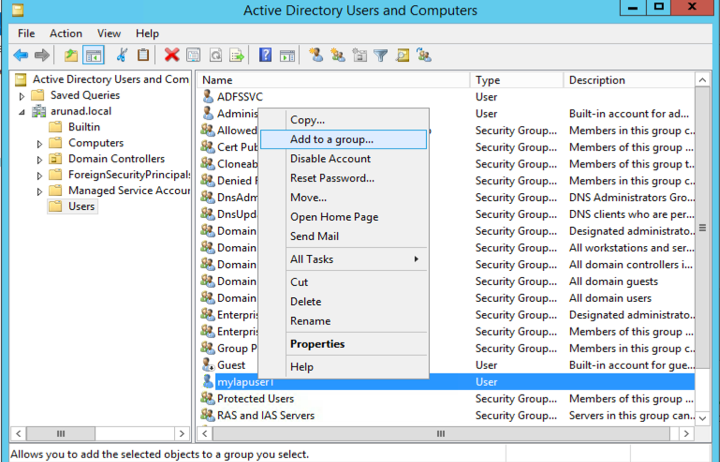 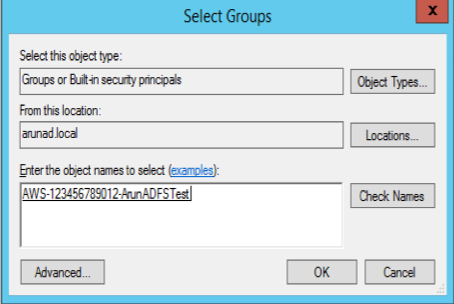 Now that you’ve created the AD groups, AD users, and IAM roles, you create the relying party trust in ADFS and write the claim rules. The ADFS IdP needs to construct the following values in the SAML assertion and send the values to AWS for authentication: 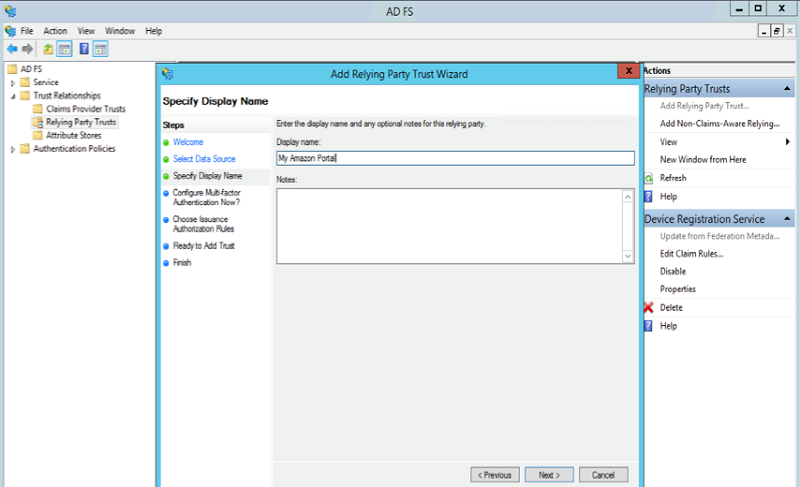 After the configuration, your claim rules looks similar to the following screenshots.

The following screenshot shows the rules for NameID. 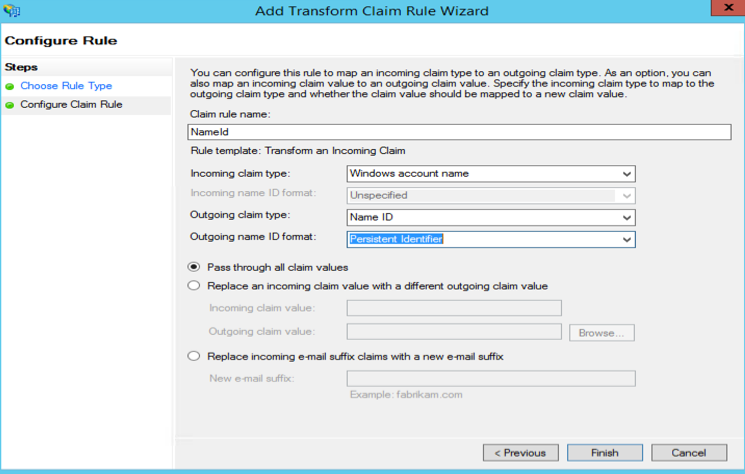 The following screenshot shows the rules for RoleSessionName. 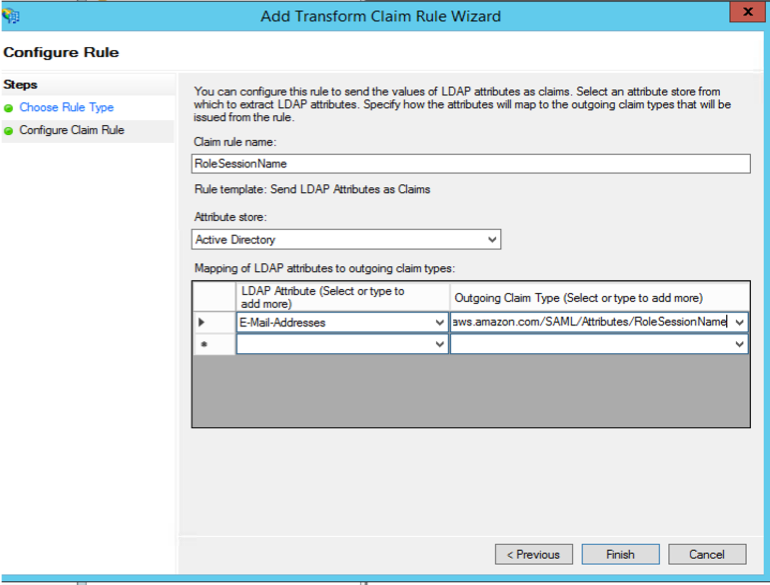 The following screenshot shows the rules for Get AD Groups. 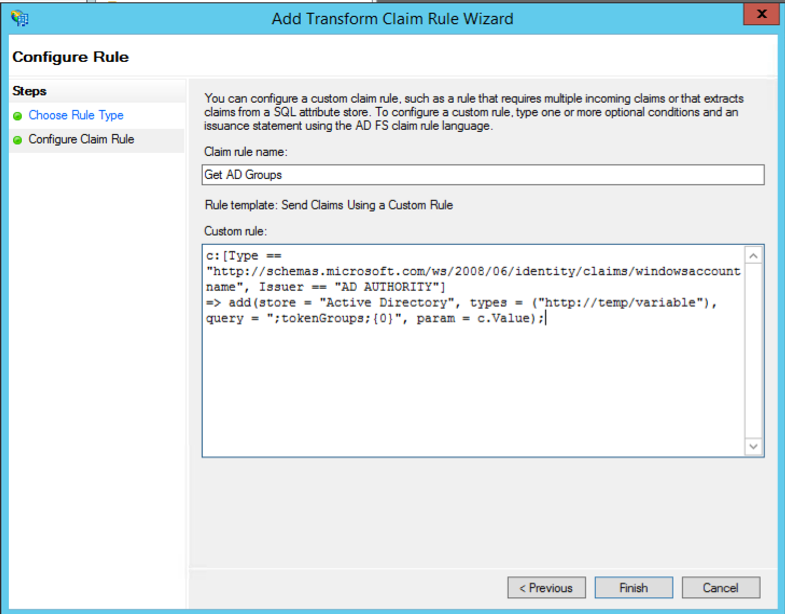 The following screenshot shows the rules for Roles. The SAML provider in IAM was created with the name MyTestADFS (arn arn:aws:iam::123456789012:saml-provider/MytestADFS), so you need to use that same value here (MyTestADFS) in the claim script. If you used a different name, replace it with your IdP ARN name. 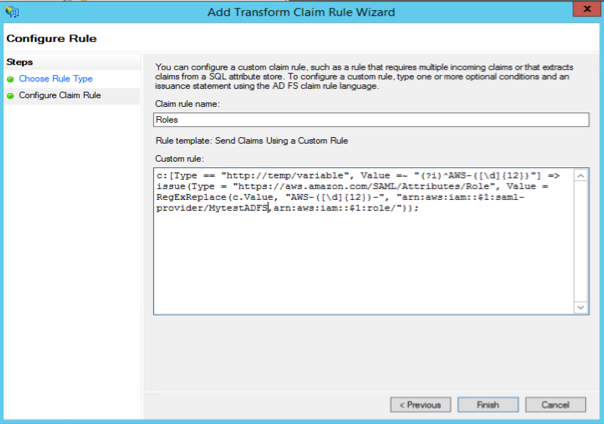 After you create these four rules, your ADFS relying trust setup is complete.

To verify that you set up your IdP successfully, complete the following steps: 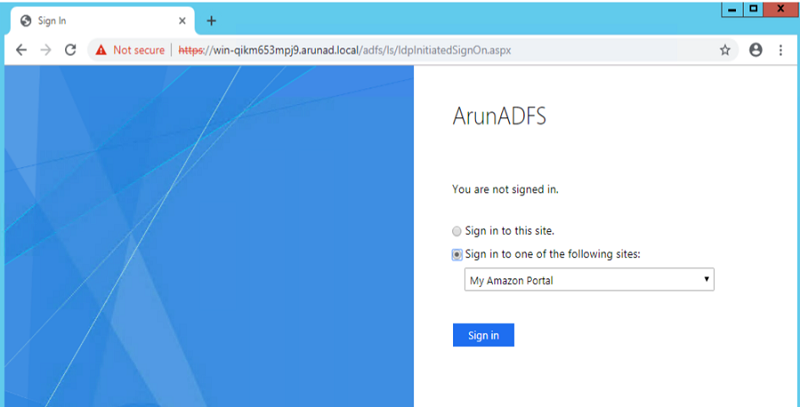 Because the domain name for this demo is arunad.local, specify the user name as ARUNAD\myldapuser1, or you can specify it as myldapuser@arunad.local.

If everything is successful, you should be able to sign in to the AWS Management Console. 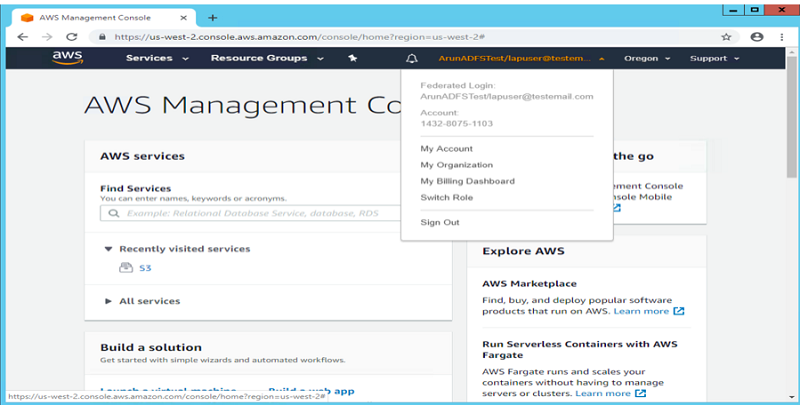 Installing the Athena ODBC driver 1.0.5 on an Amazon EC2 Linux instance and configuring it to use ADFS

Now that you have configured ADFS 3.0 and set up trust with AWS, the last step is to configure the Athena ODBC driver to use ADFS as its authentication mechanism.

As per the prerequisites, you launched the Active Directory Windows EC2 instance and the Athena ODBC driver Linux (RHEL) EC2 instance in the same VPC and subnet and allowed all traffic between both instances. However, in your environment, you need to make sure your ADFS server can communicate with the machine that has Athena JDBC/ODBC installed.

For this post, the domain name servers in the DHCP option set of VPC (in which you launch the Linux EC2) are modified as follows: 172.31.X.X, AmazonProvidedDNS, where 172.31.X.X is the IP address of the EC2 Windows instance on which ADFS is configured with the domain name arunad.local.

Setting up the environment on your EC2 instance

To set up your environment, complete the following steps:

This post uses the ping utility. The following code shows the output:

If these commands are successful, the RHEL EC2 instance can communicate with the AD server and retrieve the credentials.

The Athena ODBC driver on Linux requires you to have one of the following ODBC Driver Managers installed to set up the connection:

The command needed for installation on your EC2 instance should look similar to the following code:

Now that the ODBC driver manager is configured, the final step is to install the Athena ODBC driver 1.0.5 on this Linux Instance and configure it to use ADFS as the authentication mechanism.

The example ODBC configuration file of the downloaded driver is included in the path /opt/simba/athenaodbc/Setup/odbc.ini.

Replace the values for IdP_Host and IdP_Port to point to your ADFS server. For this post, these values are win-qikm653mpj9.arunad.local and 443. Similarly, replace UID and PWD with the LDAP user name and password you created earlier. This post uses ARUNAD\myldapuser1.  Also,  replace AwsRegion and S3OutputLocation values according to your environment. For production workloads, make sure that you set SSL_Insecure to false so the driver can verify the server certificate.

You can retrieve the HTTPS port number of your ADFS server by entering the following code on the Windows AD server instance’s power shell:

In the preceding code, Simba Athena 64-bit refers to the name of your DSN you specified in /home/ec2-user/.odbc.ini while connecting to the ODBC driver.

If you’re connected, it means you have successfully connected the Athena ODBC driver manager by authenticating your user against ADFS.

If your organization has single sign-on (SSO) into AWS enabled with the OKTA service provider, you can use the latest version of the Athena JDBC driver, version 2.0.9, to use OKTA as the authentication mechanism. For more information, see using OKTA in Athena JDBC

Alapati Arun is a Cloud Support Engineer with AWS based out of Dallas. He focuses on supporting customers in using big data technologies. He enjoys travel and watching movies.