Apache Iceberg provides the capability of ACID transactions on your data lakes, which allows concurrent queries to add or delete records isolated from any existing queries with read-consistency for queries. Iceberg is an open table format designed for large analytic workloads on huge datasets. You can perform ACID transactions against your data lakes by using simple SQL expressions. It also enables time travel, rollback, hidden partitioning, and schema evolution changes, such as adding, dropping, renaming, updating, and reordering columns.

AWS Glue is one of the key elements to building data lakes. It extracts data from multiple sources and ingests your data to your data lake built on Amazon Simple Storage Service (Amazon S3) using both batch and streaming jobs. To expand the accessibility of your AWS Glue extract, transform, and load (ETL) jobs to Iceberg, AWS Glue provides an Apache Iceberg connector. The connector allows you to build Iceberg tables on your data lakes and run Iceberg operations such as ACID transactions, time travel, rollbacks, and so on from your AWS Glue ETL jobs.

In this post, we give an overview of how to set up the Iceberg connector for AWS Glue and configure the relevant resources to use Iceberg with AWS Glue jobs. We also demonstrate how to run typical Iceberg operations on AWS Glue interactive sessions with an example use case.

With the Apache Iceberg connector for AWS Glue, you can take advantage of the following Iceberg capabilities:

Next, we demonstrate how the Apache Iceberg connector for AWS Glue works for each Iceberg capability based on an example use case.

Let’s assume that an ecommerce company sells products on their online platform. Customers can buy products and write reviews to each product. Customers can add, update, or delete their reviews at any time. The customer reviews are an important source for analyzing customer sentiment and business trends.

In this scenario, we have the following teams in our organization:

Our solution has the following requirements:

In this post, we build a data lake of customer review data on top of Amazon S3. To meet these requirements, we introduce Apache Iceberg to enable adding, updating, and deleting records; ACID transactions; and time travel queries. We also use an AWS Glue Studio notebook to integrate and query the data at scale. First, we set up the connector so we can create an AWS Glue connection for Iceberg. 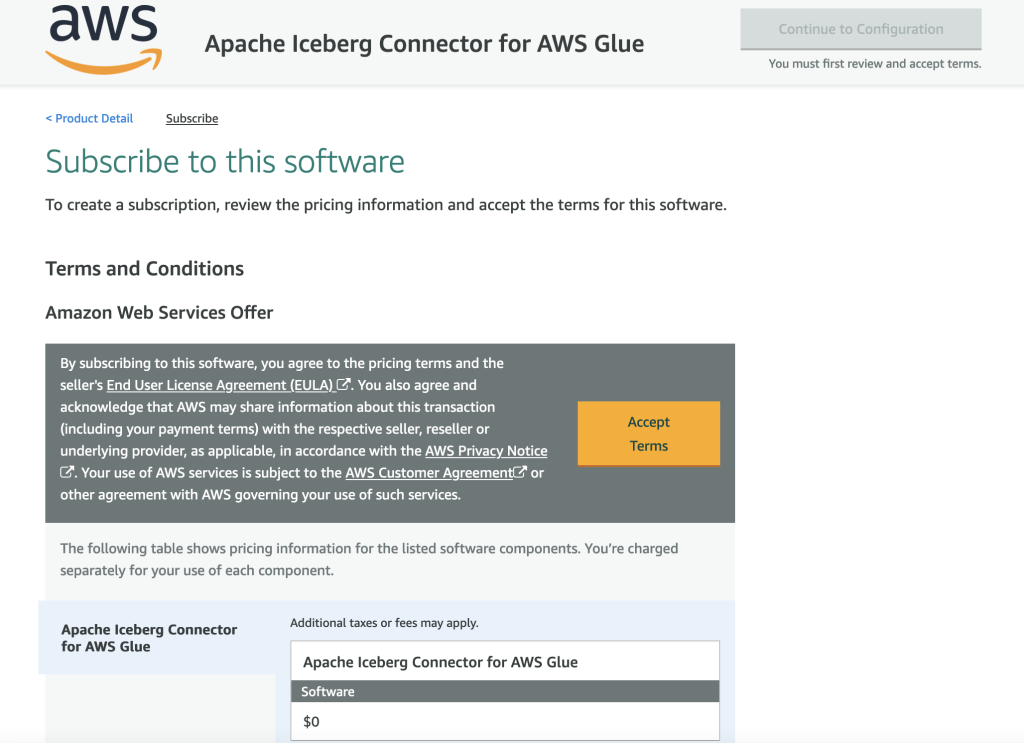 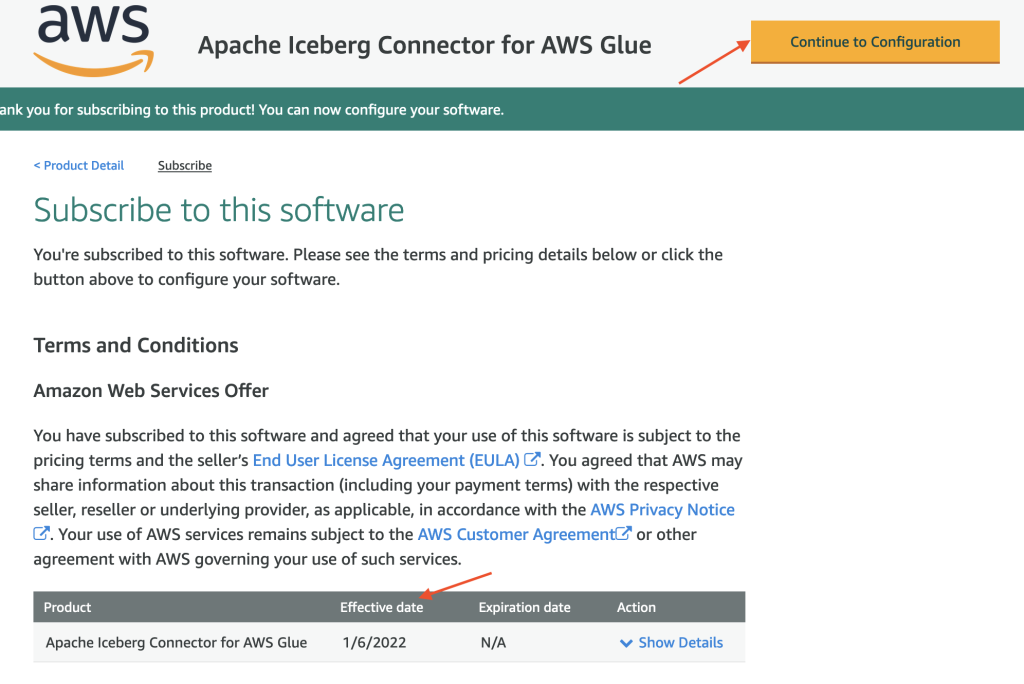 As of this writing, 0.12.0-2 is the latest version of the Apache Iceberg connector for AWS Glue. 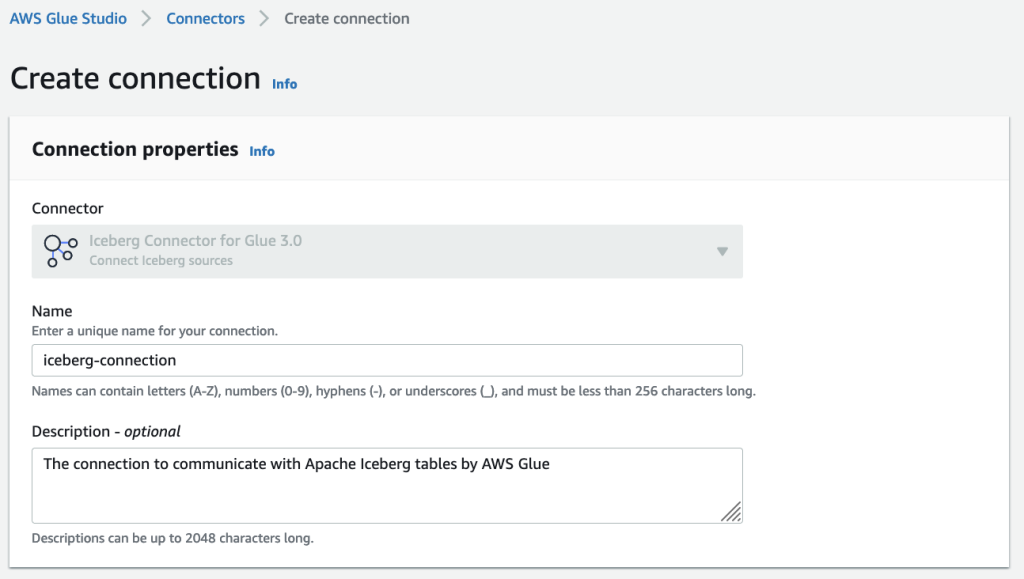 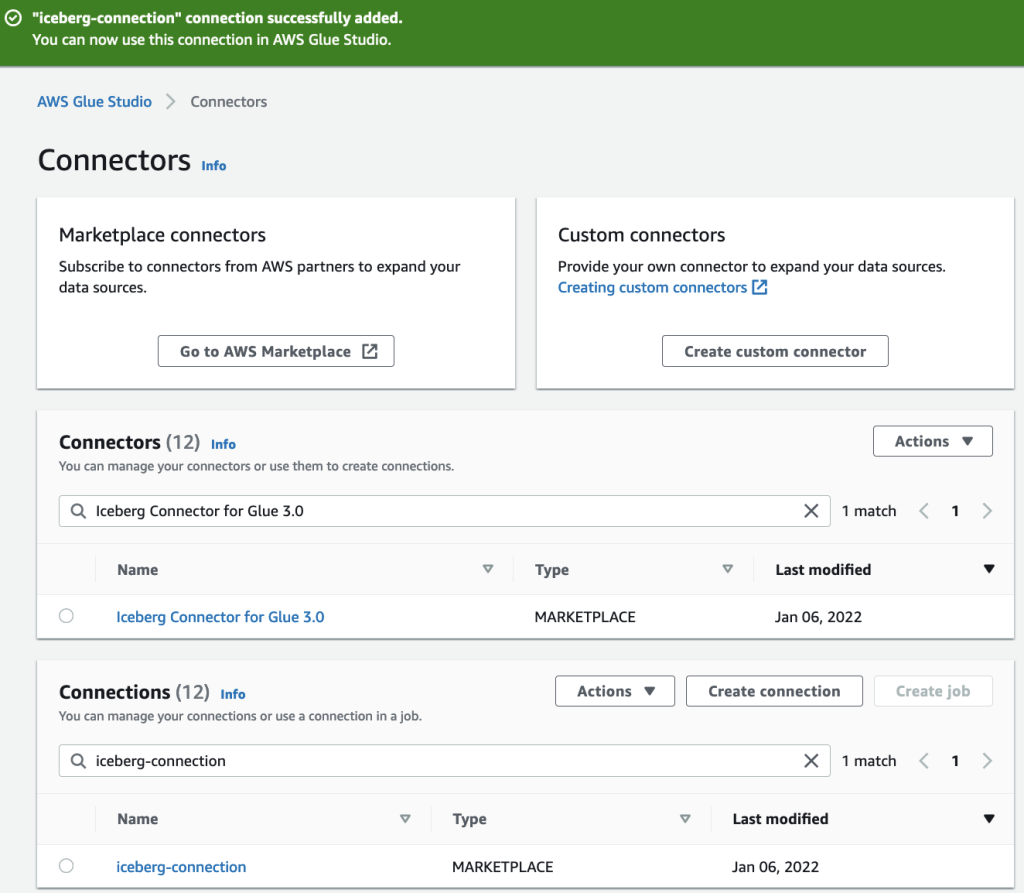 To deploy the CloudFormation template, complete the following steps:

This table is used for an AWS Glue job to obtain a commit lock to avoid concurrently modifying records in Iceberg tables. For more details about commit locking, refer to DynamoDB for Commit Locking. Note that you shouldn’t specify the name of an existing table. 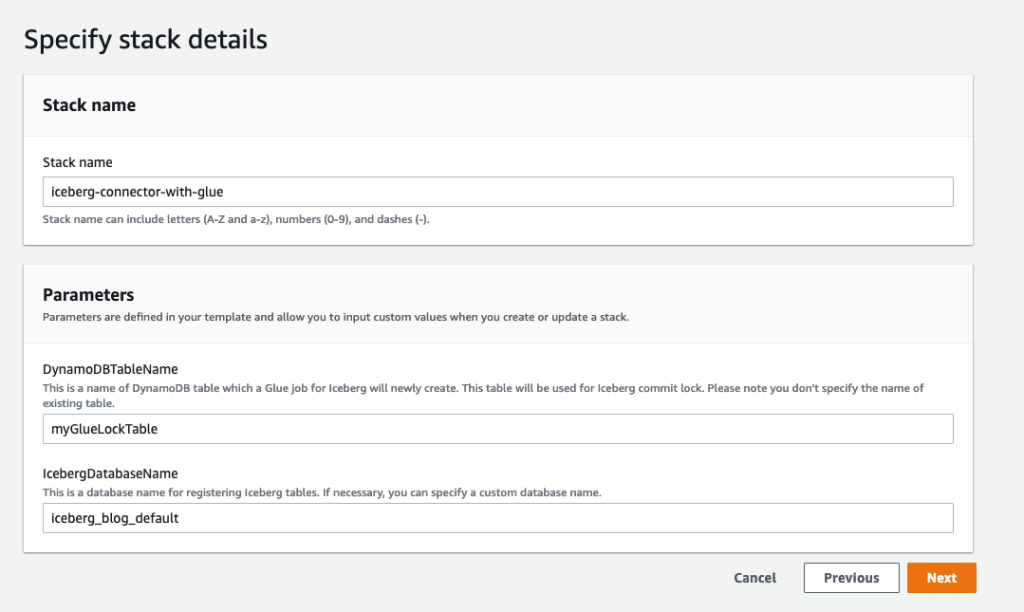 Start an AWS Glue Studio notebook to use Apache Iceberg

After you launch the CloudFormation stack, you create an AWS Glue Studio notebook to perform Iceberg operations. Complete the following steps: 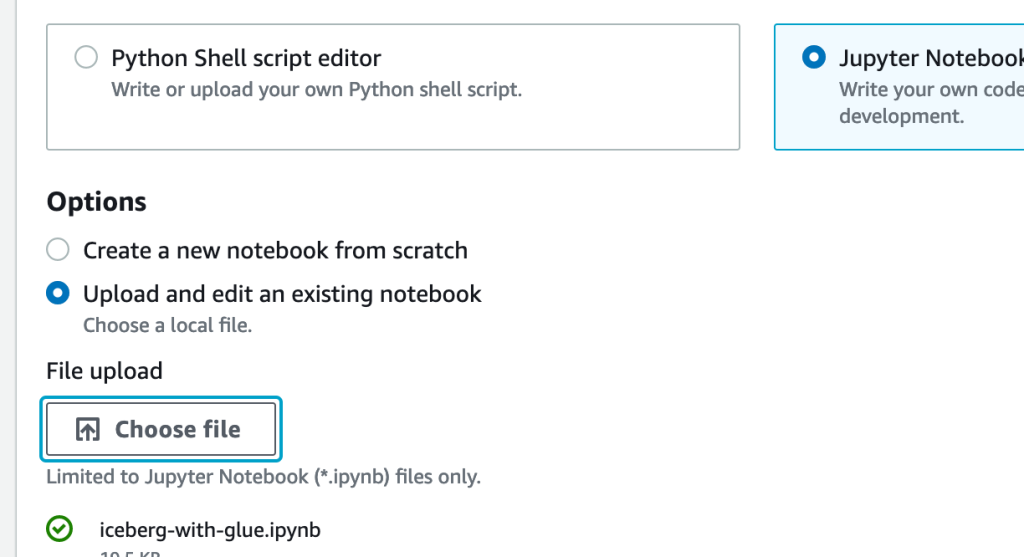 The process takes a few minutes to complete, after which you can see an AWS Glue Studio notebook view.

Set up the Iceberg configuration

To set up the Iceberg configuration, complete the following steps:

A message Session <session-id> has been created appears when your AWS Glue Studio notebook is ready.

To load the configuration, set the S3 bucket name that was created via the CloudFormation stack.

Initialize the job with Iceberg configurations

We continue to run cells to initiate a SparkSession in this section.

The following screenshot shows the relevant section in the notebook.

We provide the details of each parameter that you configure for the SparkSession in the appendix of this post.

For this post, we demonstrate setting the Spark configuration for Iceberg. You can also set the configuration as AWS Glue job parameters. For more information, refer to the Usage Information section in the Iceberg connector product page.

To demonstrate this use case, we walk through the following typical steps:

The following code initially extracts the Amazon customer reviews, which are stored in a public S3 bucket. Then it creates an Iceberg table of the customer reviews and loads these reviews into your specified S3 bucket (created via CloudFormation stack). Note that the script loads partial datasets to avoid taking a lot of time to load the data. 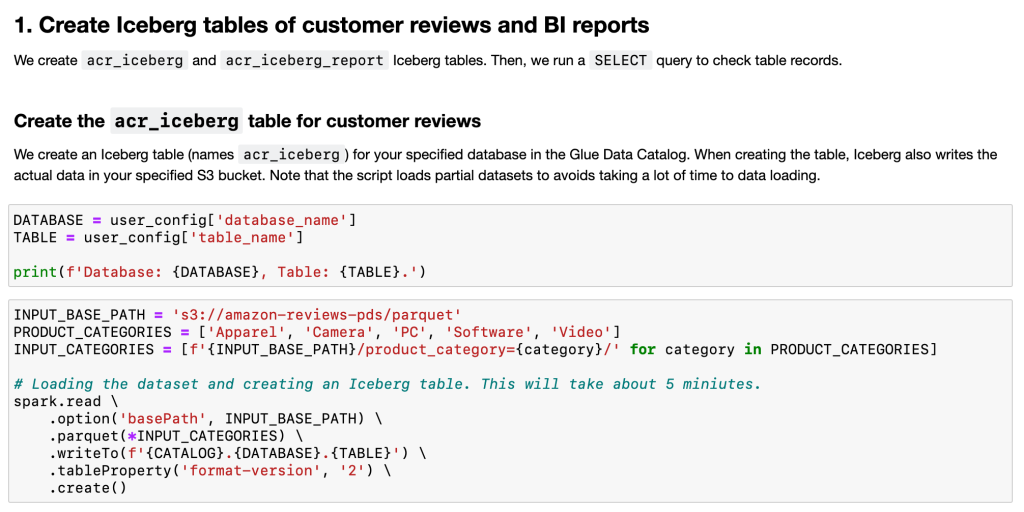 After you run the cells, the acr_iceberg table is available in your specified database in the Glue Data Catalog.

You can also see the actual data and metadata of the Iceberg table in the S3 bucket that is created through the CloudFormation stack. Iceberg creates the table and writes actual data and relevant metadata that includes table schema, table version information, and so on. See the following objects in your S3 bucket:

The job tries to create a DynamoDB table, which you specified in the CloudFormation stack (in the following screenshot, its name is myGlueLockTable), if it doesn’t exist already. As we discussed earlier, the DynamoDB table is used for commit locking for Iceberg tables.

The data engineer team also creates the acr_iceberg_report table for BI reports in the Glue Data Catalog. This table initially has the following records.

To create the table, run the following cell.

The two Iceberg tables have been created. Let’s check the acr_iceberg table records by running a query.

You can see the Iceberg table records by using a SELECT statement. In this section, we query the acr_iceberg table to simulate seeing a current BI report data by running an ad hoc query.

Run the following cell in the notebook to get the aggregated number of customer comments and mean star rating for each product_category.

The cell output has the following results.

Another way to query Iceberg tables is using Amazon Athena (when you use the Athena with Iceberg tables, you need to set up the Iceberg environment) or Amazon EMR.

In this section, customers add comments for some products in the Industrial Supplies product category, and we add these comments to the acr_iceberg table. To demonstrate this scenario, we create a Spark DataFrame based on the following new customer reviews and then add them to the table with an INSERT statement.

Run the following cells in the notebook to insert the customer comments to the Iceberg table. The process takes about 1 minute. 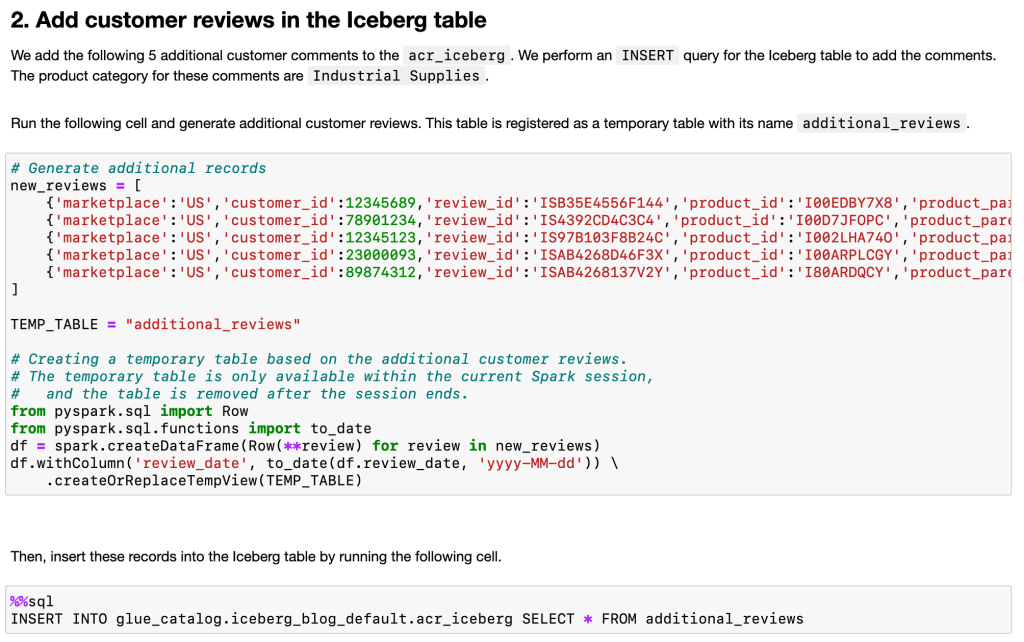 Run the next cell to see an addition to the product category Industrial_Supplies with 5 under comment_count.

3. Update a customer review in the Iceberg table

In the previous section, we added new customer reviews to the acr_iceberg Iceberg table. In this section, a customer requests an update of their review. Specifically, customer 78901234 requests the following update of the review ID IS4392CD4C3C4.

We update the customer comment by using an UPDATE query by running the following cell.

We can review the updated record by running the next cell as follows.

Also, when you run this cell for the reporting table, you can see the updated avg_star column value for the Industrial_Supplies product category. Specifically, the avg_star value has been updated from 3.8 to 4.2 as a result of the star_rating changing from 3 to 5:

4. Reflect changes in the customer reviews table in the BI report table with a MERGE INTO query

In this section, we reflect the changes in the acr_iceberg table into the BI report table acr_iceberg_report. To do so, we run the MERGE INTO query and combine the two tables based on the condition of the product_category column in each table. This query works as follows:

This MERGE INTO operation is also referred to as an UPSERT (update and insert).

After the MERGE INTO query is complete, you can see the updated acr_iceberg_report table by running the following cell.

The MERGE INTO query performed the following changes:

5. Roll back the Iceberg tables and reflect changes in the BI report table

In this section, the customer who requested the update of the review now requests to revert the updated review.

Iceberg stores versioning tables through the operations for Iceberg tables. We can see the information of each version of table by inspecting tables, and we can also time travel or roll back tables to an old table version.

Get the metadata of each report table

As a first step, we check table versions by inspecting the table. Run the following cells. 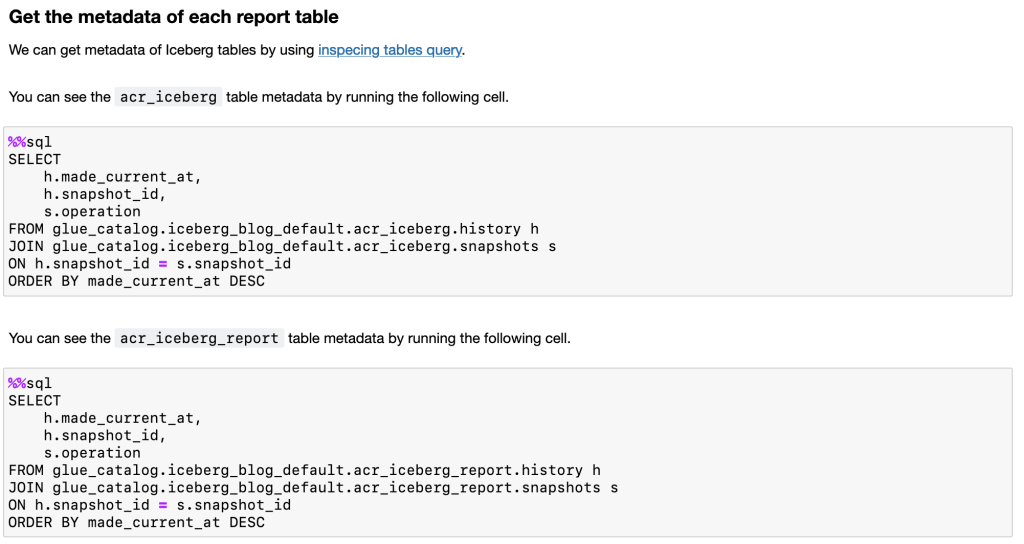 Now you can see the following table versions in acr_iceberg and acr_iceberg_report: 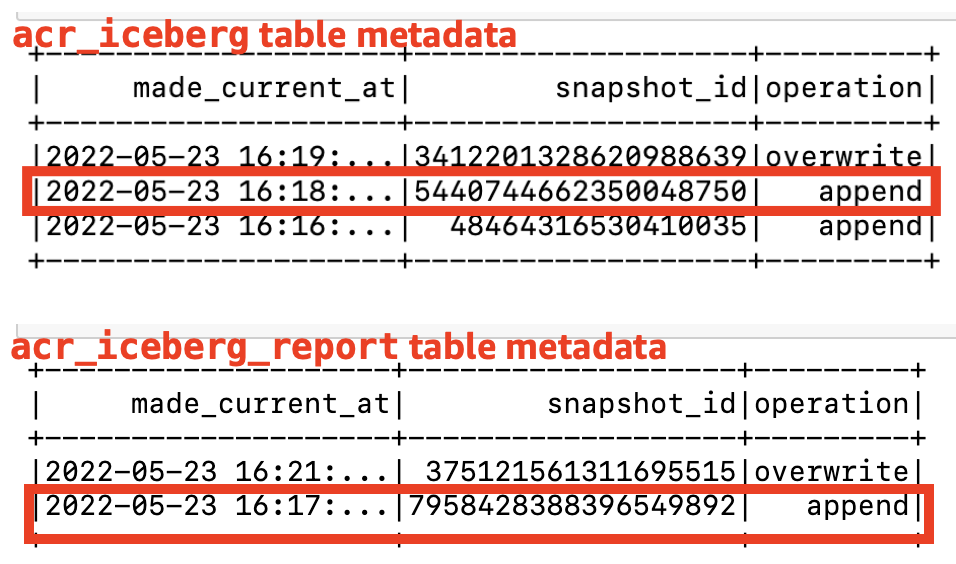 Based on your snapshot IDs, you can roll back each table version:

After you specify the snapshot_id for each rollback query, run the following cells.

When this step is complete, you can see the previous and current snapshot IDs of each table. 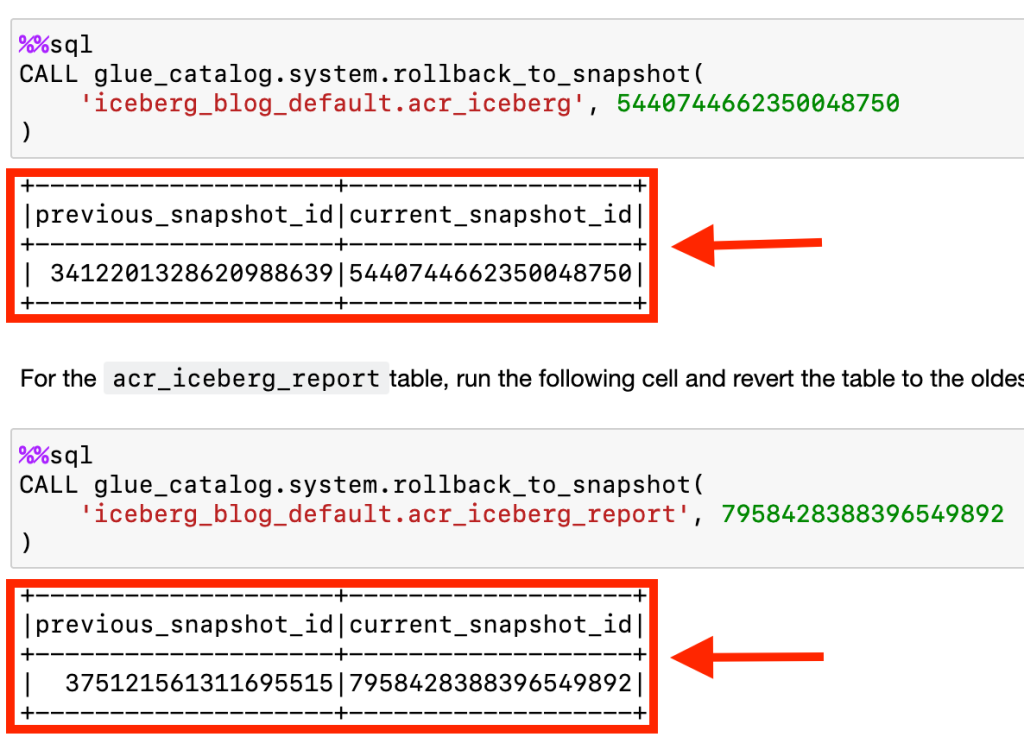 Each Iceberg table has been reverted to the specific version now.

We reflect the acr_iceberg table reversion into the current acr_iceberg_report table. To complete this, run the following cell.

After you rerun the MERGE INTO query, run the following cell to see the new table records. When we compare the table records, we observe that the avg_star value in Industrial_Supplies is lower than the value of the previous table avg_star.

You were able to reflect a customer’s request of reverting their updated review on the BI report table. Specifically, you can get the updated avg_star record in the Industrial_Supplies product category.

To clean up all resources that you created, delete the CloudFormation stack.

In this post, we walked through using the Apache Iceberg connector with AWS Glue ETL jobs. We created an Iceberg table built on Amazon S3, and ran queries such as reading the Iceberg table data, inserting a record, merging two tables, and time travel.

The operations for the Iceberg table that we demonstrated in this post aren’t all of the operations Iceberg supports. Refer to the Apache Iceberg documentation for information about more operations.

Appendix: Spark configurations to use Apache Iceberg on AWS Glue

As we mentioned earlier, the notebook sets up a Spark configuration to integrate Iceberg with AWS Glue. The following table shows what each parameter defines.