In this blog, we define and demonstrate the scalability metrics for a typical real-world application using Computational Fluid Dynamics (CFD) software from Siemens, Simcenter STAR-CCM+, running on a High Performance Computing (HPC) cluster on Amazon Web Services (AWS). This scenario demonstrates the scaling of an external aerodynamics CFD case with 97 million cells to over 4,000 cores of Amazon EC2 C5n.18xlarge instances using the Simcenter STAR-CCM+ software. We also discuss the effects of scaling on efficiency, simulation turn-around time, and total simulation costs. TLG Aerospace, a Seattle-based aerospace engineering services company, contributed the data used in this blog. For a detailed case study describing TLG Aerospace’s experience and the results they achieved, see the TLG Aerospace case study.

For HPC workloads that use multiple nodes, the cluster setup including the network is at the heart of scalability concerns. Some of the most common concerns from CFD or HPC engineers are “how well will my application scale on AWS?”, “how do I optimize the associated costs for best performance of my application on AWS?”, “what are the best practices in setting up an HPC cluster on AWS to reduce the simulation turn-around time and maintain high efficiency?” This post aims to answer these concerns by defining and explaining important scalability-related parameters by illustrating the results from the CFD case. For detailed HPC-specific information, see visit the High Performance Computing page and download the CFD whitepaper, Computational Fluid Dynamics on AWS.

HPC applications, such as CFD, depend heavily on the applications’ ability to scale compute tasks efficiently in parallel across multiple compute resources. We often evaluate parallel performance by determining an application’s scale-up. Scale-up – a function of the number of processors used – is the time to complete a run on one processor, divided by the time to complete the same run on the number of processors used for the parallel run.

In addition to characterizing the scale-up of an application, scalability can be further characterized as “strong” or “weak”. Strong scaling offers a traditional view of application scaling, where a problem size is fixed and spread over an increasing number of processors. As more processors are added to the calculation, good strong scaling means that the time to complete the calculation decreases proportionally with increasing processor count. In comparison, weak scaling does not fix the problem size used in the evaluation, but purposely increases the problem size as the number of processors also increases. An application demonstrates good weak scaling when the time to complete the calculation remains constant as the ratio of compute effort to the number of processors is held constant. Weak scaling offers insight into how an application behaves with varying case size.

Figure 1, the following image, shows scale-up as a function of increasing processor count for the Simcenter STAR-CCM+ case data provided by TLG Aerospace. This is a demonstration of “strong” scalability. The blue line shows what ideal or perfect scalability looks like. The purple triangles show the actual scale-up for the case as a function of increasing processor count. The closeness of these two curves demonstrates excellent scaling to well over 3,000 processors for this mid-to-large-sized 97M cell case. This example was run on Amazon EC2 C5n.18xlarge Intel Skylake instances, 3.0 GHz, each providing 36 cores with Hyper-Threading disabled. 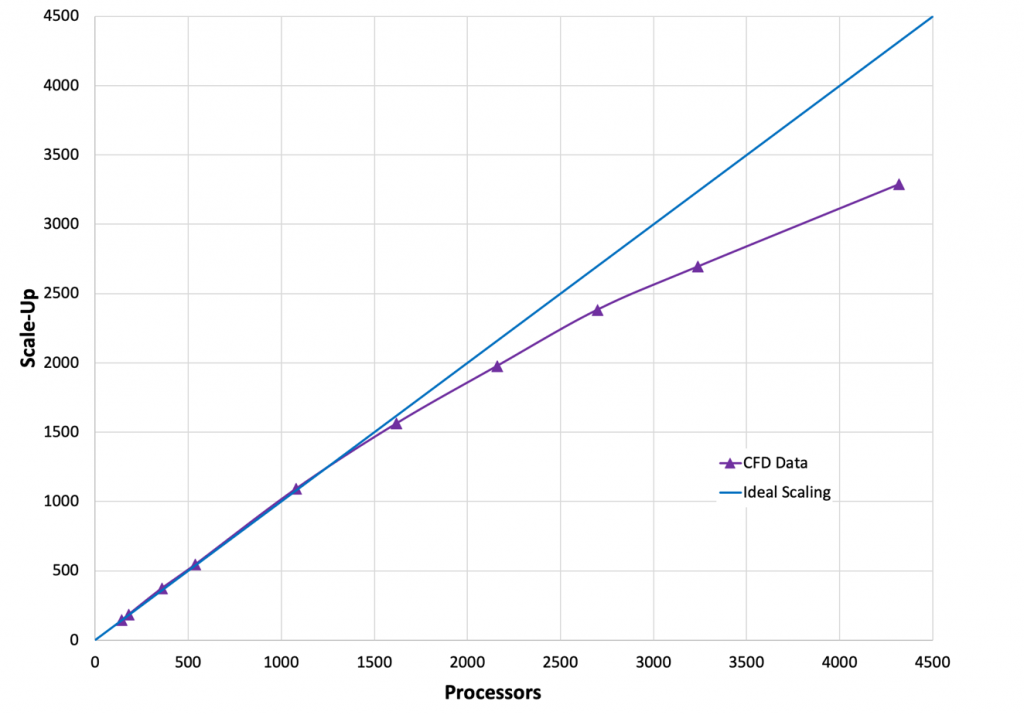 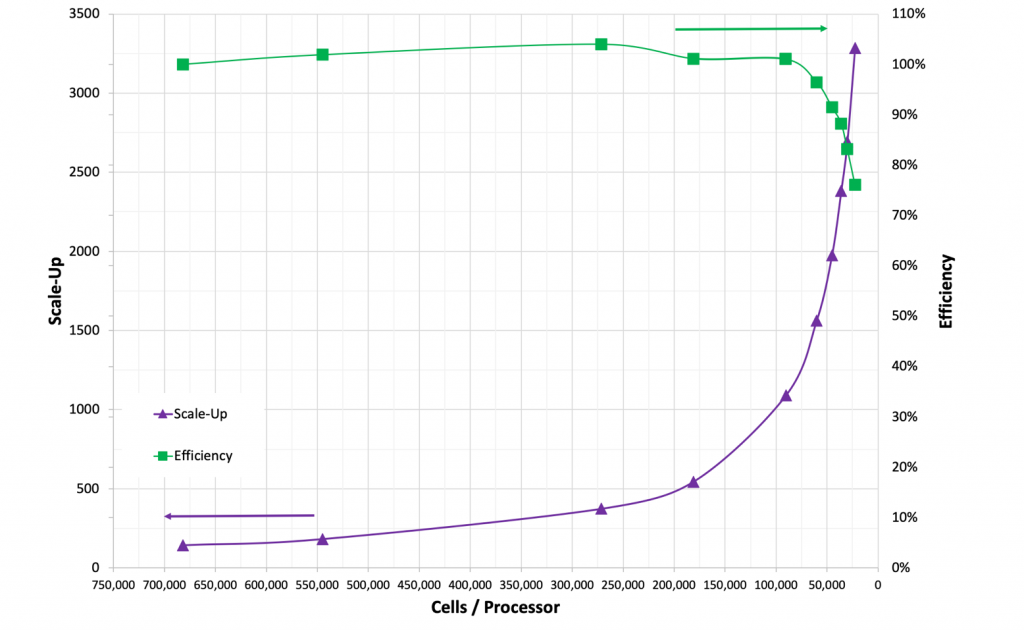 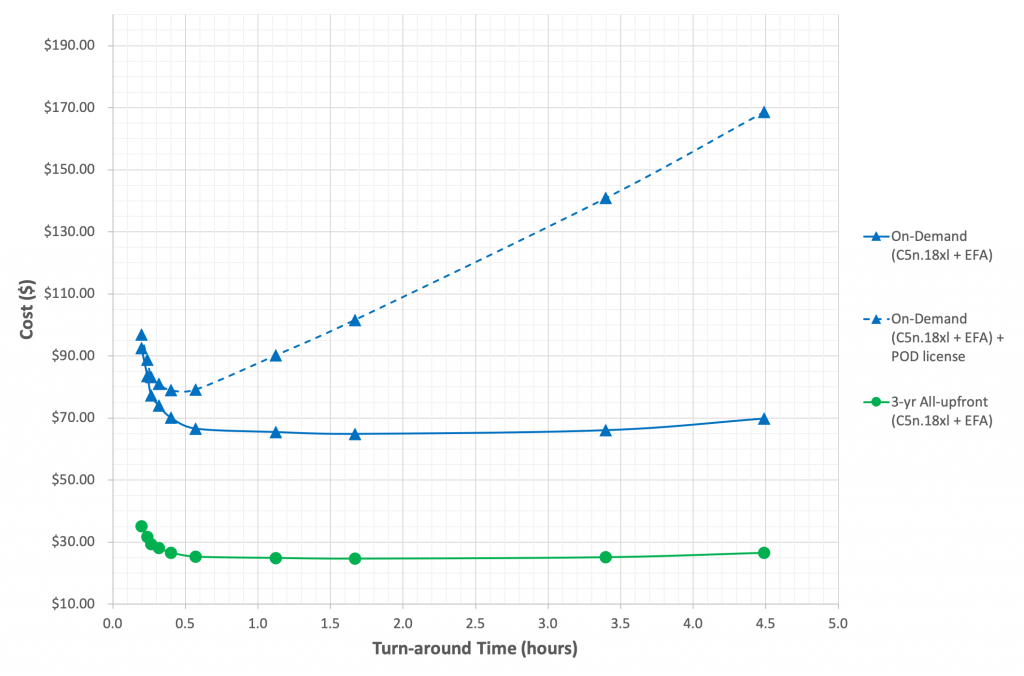 Additional information about the test scenario

TLG Aerospace has used the Simcenter STAR-CCM+ Power-On-Demand (POD) license for running the simulations for this case. POD license enables flexible On-Demand usage of the software on unlimited cores for a fixed price of $22 per hour. The total cost per run, which includes the computational cost, plus the POD license cost is represented in Figure 3 by the dashed blue curve. As POD license is charged per hour, the total cost per run increases for higher turn-around times. Note that many users run Simcenter STAR-CCM+ with fewer cells per core than this case. While this increases the compute cost, other concerns—such as license costs or schedules—can be overriding factors. However, many find the reduced turn-around time well worth the price of the additional instances.

Amazon Linux is optimized to run on AWS and offers excellent performance for running HPC applications. For the case presented here, the operating system used was Amazon Linux 2. While other Linux distributions are also performant, we strongly recommend that for Linux HPC applications, you use a current Linux kernel.

Amazon Elastic Block Store (Amazon EBS) is a persistent, block-level storage device that is often used for cluster storage on AWS. A standard EBS General Purpose SSD (gp2) volume was used for this scenario. For other HPC applications that may require faster I/O to prevent data writes from being a bottleneck to turn-around speed, we recommend FSx for Lustre. FSx for Lustre seamlessly integrates with Amazon S3, allowing users for efficient data interaction with Amazon S3.

AWS customers can choose to run their applications on either threads or cores. With hyper-threading, a single CPU physical core appears as two logical CPUs to the operating system. For an application like Simcenter STAR-CCM+, excellent linear scaling can be seen when using either threads or cores, though we generally recommend disabling hyper-threading. Most HPC applications benefit from disabling hyper-threading, and therefore, it tends to be the preferred environment for running HPC workloads. For more information, see Well-Architected Framework HPC Lens.

Elastic Fabric Adapter (EFA) is a network device that can be attached to Amazon EC2 instances to accelerate HPC applications by providing lower and consistent latency and higher throughput than the Transmission Control Protocol (TCP) transport. C5n.18xlarge instances used for running Simcenter STAR-CCM+ for this case support EFA technology, which is generally recommended for best scaling.

This post demonstrates the scalability of a commercial CFD software Simcenter STAR-CCM+ for an external aerodynamics simulation performed on the Amazon EC2 C5n.18xlarge instances. The availability of EFA, a high-performing network device on these instances result in excellent scalability of the application. The case turn-around time and associated costs of running Simcenter STAR-CCM+ on AWS hardware are discussed. In general, excellent performance can be achieved on AWS for most HPC applications. In addition to low cost and quick turn-around time, important considerations for HPC also include throughput and availability. AWS offers high throughput, scalability, security, cost-savings, and high availability, decreasing a long queue time and reducing the case turn-around time.