This blog post shows how to use AWS SAM Pipelines to create a CI/CD deployment pipeline configuration file that integrates with GitLab CI/CD.

A deployment pipeline is an automated sequence of steps that are performed to release a new version of an application. They are defined by a pipeline template file. AWS SAM Pipelines provides templates for popular CI/CD systems such as AWS CodePipeline, Jenkins, GitHub Actions, and GitLab CI/CD. Pipeline templates include AWS deployment best practices to help with multi-account and multi-Region deployments. AWS environments such as dev and production typically exist in different AWS accounts. This allows development teams to configure safe deployment pipelines, without making unintended changes to infrastructure. You can also supply your own custom pipeline templates to help to standardize pipelines across development teams.

Having two separate commands allows you to manage the credentials for operators and developer separately. Operators can use sam pipeline bootstrap to provision AWS pipeline resources. This can reduce the risk of production errors and operational costs. Developers can then focus on building without having to set up the pipeline infrastructure by running the sam pipeline init command.

You can also combine these two commands by running sam pipeline init –bootstrap. This takes you through the entire guided bootstrap and initialization process.

The following steps show how to use AWS SAM Pipelines to create a deployment pipeline for GitLab CI/CD. GitLab is an AWS Partner Network (APN) member to build, review, and deploy code. AWS SAM Pipelines creates two deployment pipelines, one for a feature branch, and one for a main branch. Each pipeline runs as a separate environment in separate AWS accounts. Each time you make a commit to the repository’s feature branch, the pipeline builds, tests, and deploys a serverless application in the development account. For each commit to the Main branch, the pipeline builds, tests, and deploys to a production account.

Use the AWS SAM CLI to create a new serverless application from a Quick Start Template.

Run the following AWS SAM CLI command in the root directory of the repository and follow the prompts. For this example, can select any of the application templates:

The sam pipeline bootstrap command creates the AWS resources and permissions required to deploy application artifacts from your code repository into your AWS environments. 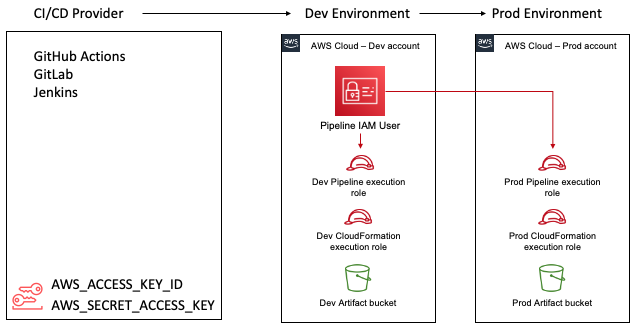 In a terminal window, change directories to the root of the previously created SAM project and run the following command:

This guides you through a series of questions to help create a .gitlab-ci.yml file. The --bootstrap option enables you to set up AWS pipeline stage resources before the template file is initialized:

Set up the dev stage by answering the following questions:

AWS SAM Pipelines creates a PipelineUser with an associated ACCESS_KEY_ID and SECRET_ACCESS_KEY which GitLab uses to deploy artifacts to your AWS accounts. An S3 bucket is created along with two roles PipelineExecutionRole and CloudFormationExecutionRole.

Make a note of these values. You use these in the following steps to configure the production deployment environment and CI/CD provider.

The AWS SAM Pipeline command automatically detects that a second stage is required to complete the GitLab template, and prompts you to go through the set-up process for this:

The AWS resources and permissions are now created to run the deployment pipeline for a dev and prod stage. The definition of these two stages is saved in .aws-sam/pipeline/pipelineconfig.toml.

The following questions help create a .gitlab-ci.yml file. GitLab uses this file to run the CI/CD pipeline to build and deploy the application. When prompted, enter the name for both the dev and Prod stages. Use the following example to help answer the questions: 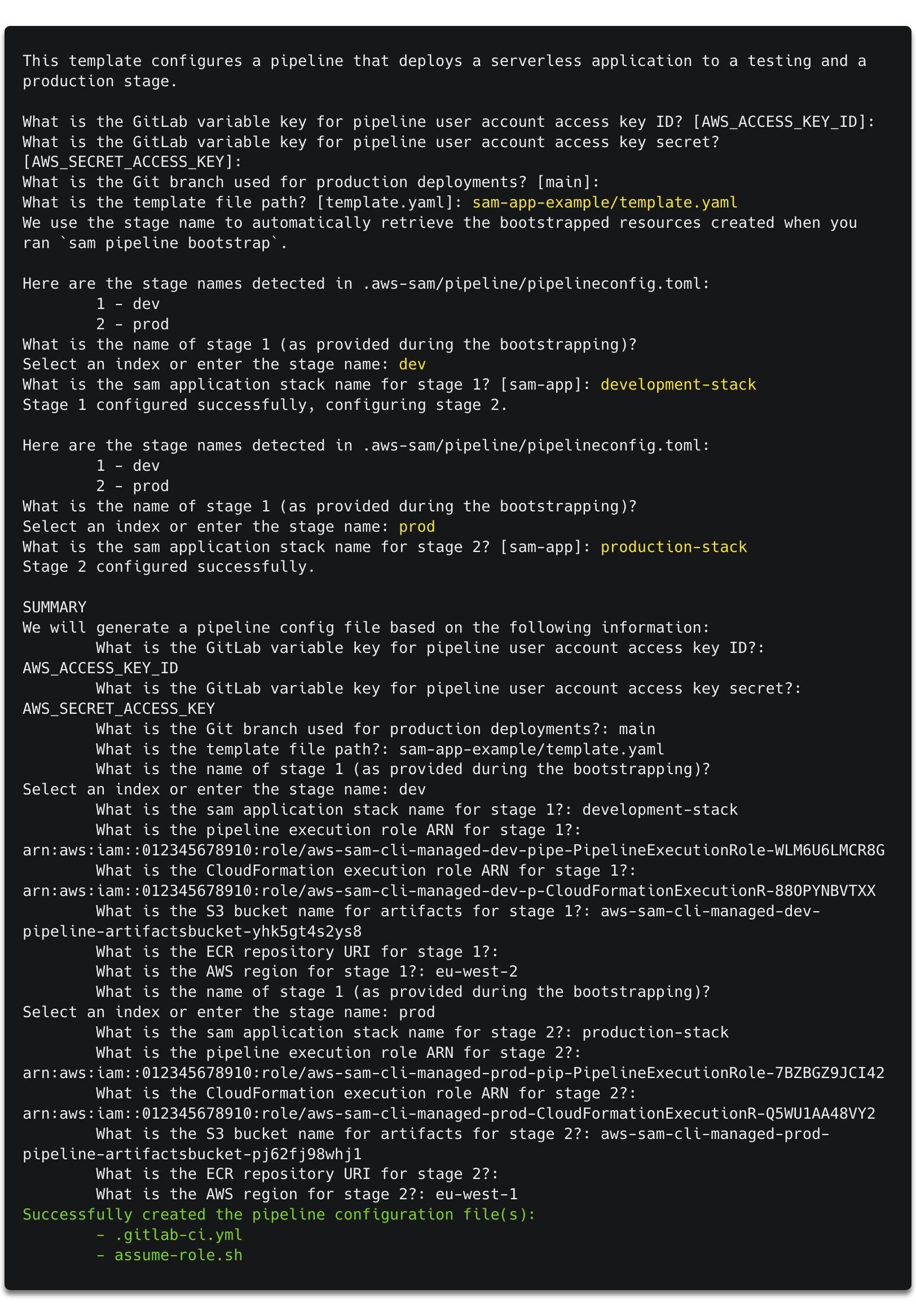 A .gitlab-ci.yml pipeline file is generated. The file contains a number of environment variables, which reference the details from AWS SAM pipeline bootstrap command. This includes using the AWS_ACCESS_KEY_ID and AWS_SECRET_ACCESS_KEY securely stored in the GitLab CI/CD repository.

The pipeline file contains a build and deploy stage for a branch that follows the naming pattern ‘feature-*’. The build process assumes the TESTING_PIPELINE_EXECUTION_ROLE in the testing account to deploy the application. sam build uses the AWS SAM template file previously created. It builds the application artifacts using the default AWS SAM build images. You can further customize the sam build –use-container command if necessary.

By default the Docker image used to create the build artifact is pulled from Amazon ECR Public. The default Node.js 14 image in this example is based on the language specified during sam init. To pull a different container image, use the --build-image option as specified in the documentation.

sam deploy deploys the application to a new stack in the dev stage using the TESTING_CLOUDFORMATION_EXECUTION_ROLE.The following code shows how this configured in the .gitlab-ci.yml file.

GitLab CI/CD uses the AWS_ACCESS_KEY_ID and AWS_SECRET_ACCESS_KEY to authenticate to your AWS account. The values are associated with a new user generated in the previous sam pipeline init --bootstrap step. Save these values securely in GitLab’s CI/CD variables section:

Configure the new feature-1 branch to be protected so it can access the protected GitLab CI/D variables.

1. Add the AWS SAM application files to the repository and push the branch changes to GitLab CI/CD:

This triggers a new pipeline run that deploys the application to the dev environment. The following screenshot shows GitLab’s CI/CD page.

AWS CloudFormation shows that a new stack has been created in the dev stage account. It is named after the feature branch:

To deploy the feature to production, make a pull request to merge the feature-1 branch into the main branch:

This merges the feature-1 branch to the main branch, triggering the pipeline to run the production build, testing, and deployment steps: 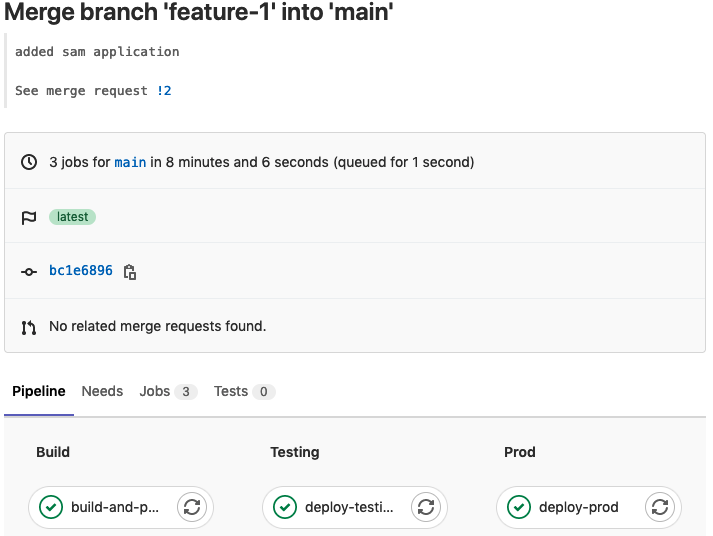 AWS SAM Pipelines is a new feature of the AWS SAM CLI that helps organizations quickly create pipeline files for their preferred CI/CD system. AWS provides a default set of pipeline templates that follow best practices for popular CI/CD systems such as AWS CodePipeline, Jenkins, GitHub Actions, and GitLab CI/CD. Organizations can also supply their custom pipeline templates via Git repositories to standardize custom pipelines across hundreds of application development teams. This post shows how to use AWS SAM Pipelines to create a CI/CD deployment pipeline for GitLab.