This post is written by Pallavi Ravishankar a Senior Product Manager and Jason Nicholls an Enterprise Solutions Architect.

Debugging and fixing infrastructure is one of the key responsibilities of system and network administrators. When an instance fails to start up on premises or can no longer connect to the network, an administrator can walk up to the server in a data center and use the serial port of the server to resolve the problem. In the AWS Cloud, the administrator has no access to the data center. In the past Amazon Elastic Compute Cloud (Amazon EC2) customers could only view console output using the GetConsoleOutput API to identify that a network or boot failure has occurred.

On March 30,2021, AWS announced the EC2 Serial Console, a simple, and secure way for system and network administrators to interactively troubleshoot boot and network connectivity issues by establishing a virtual serial connection to your Amazon EC2 instances.

In this post, we walk you through a scenario where an Amazon EC2 instance fails to start.  We demonstrate how you can access the GNU GRand Unified Bootloader (GRUB) using Amazon EC2 Serial Console to fix the problem. While this post focuses on Amazon Linux 2, you can use a similar workflow with other Linux distributions in addition to as on Windows instances to troubleshoot and fix boot-failure.

The EC2 Serial Console provides a secure and dedicated way to connect to the serial port (ttyS0 or COM1) of your Amazon EC2 instance. The EC2 Serial Console can establish connection to an instance even when a user is not able to connect using other methods such as Secure Shell (SSH) or Remote Desktop Protocol (RDP). You do not need to have direct network connectivity to the instance in order to access it using the virtual serial port.

Configuration changes or software updates are two examples out of many that could result in an Amazon EC2 instance start-up failure.

For example, in the configuration change scenario, you might have made an error to the file systems table (/etc/fstab), which controls how disks are mounted. Or you might have misconfigured the Ethernet configuration, resulting in an instance that boots without network connectivity. In both cases, the only way to troubleshoot the misconfigured instance is to view the boot sequence. You can view the entire boot sequence using EC2 Serial Console via the AWS Management Console.

The following screenshot from EC2 Serial Console shows the boot process of an instance that had both the /etc/fstab and network configuration files deleted. 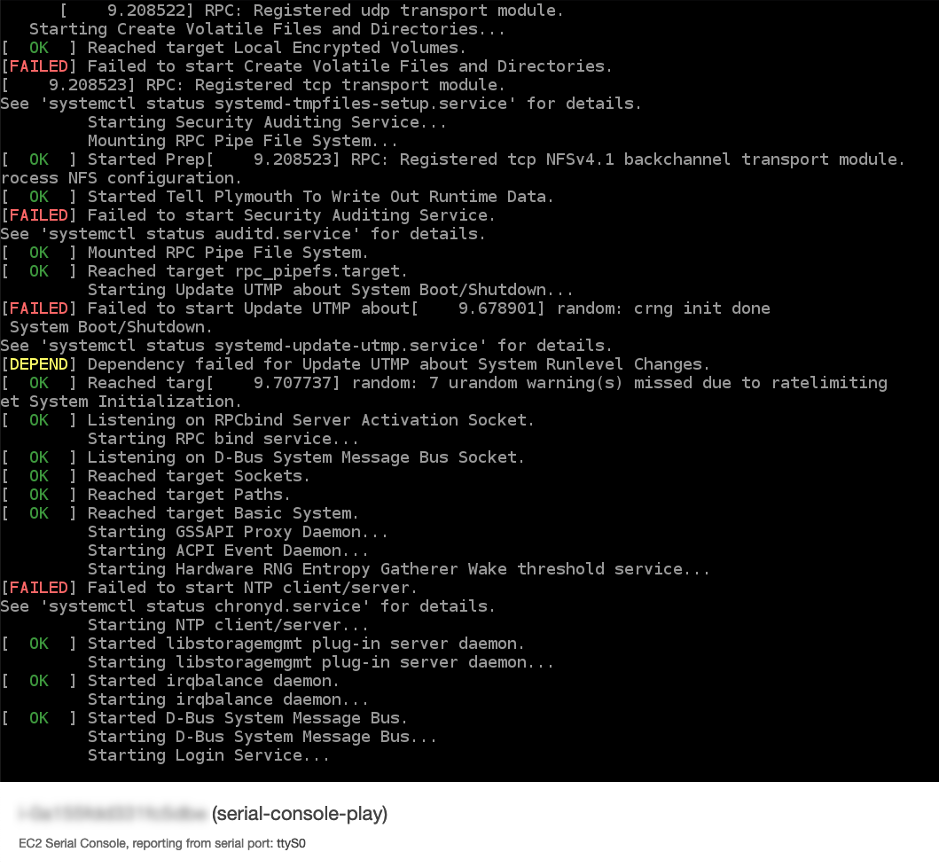 In the software update scenario you might have upgraded the Linux kernel, and in the process might have inadvertently deleted the wrong kernel. After rebooting, the missing kernel will fail to load correctly. In this scenario, you must revert back to the last known stable kernel. Access to the serial port using EC2 Serial Console shows you that the kernel is no longer available. The following screenshot shows an example of this error.

You can simulate the same scenario by renaming the Linux kernel. Before you rename the kernel, you must ensure that GRUB is configured to read and write to the virtual serial port of your EC2 Instance. You will later use GRUB to access a rescue kernel to resolve the start-up failure.

Now that you have an idea of example cases where you might run into system failure, let’s walk through how EC2 serial console with GRUB can help you fix the issue.

GRUB is the default boot-loader for most Linux operating systems. The GRUB menu appears when you press and hold Shift during the boot process. From the GRUB menu, you can select which kernel to boot into, or modify menu entries to change how the kernel will boot. This can be useful when troubleshooting a failing instance.

Before you begin, ensure that you have started an Amazon EC2 instance using the latest Amazon Linux 2 AMI with the latest kernel.

To edit the GRUB file

GRUB waits a configured amount of time before starting the kernel. Notice that Amazon Linux 2 has the time set to 0 seconds. The value is denoted by GRUB_TIMEOUT. A timeout value of -1 waits indefinitely, and 0 is immediately.

The EC2 console combines all these steps into a single-click access. For detailed instructions of this process, see Connect to the EC2 Serial Console. 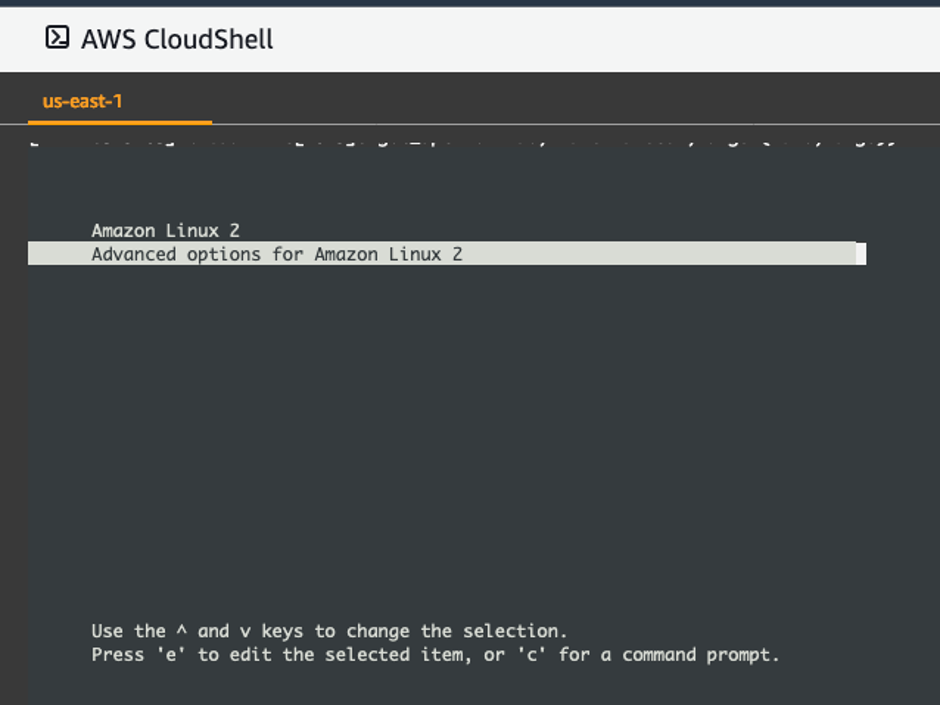 Now that you can access the GRUB menu, you can simulate a failed kernel boot. In this example, you use AWS CloudShell to connect via SSH to your instance.

To simulate a failed kernel load

You should see a message similar to the following image, to show that you are indeed running version 4.14.104-95.84. 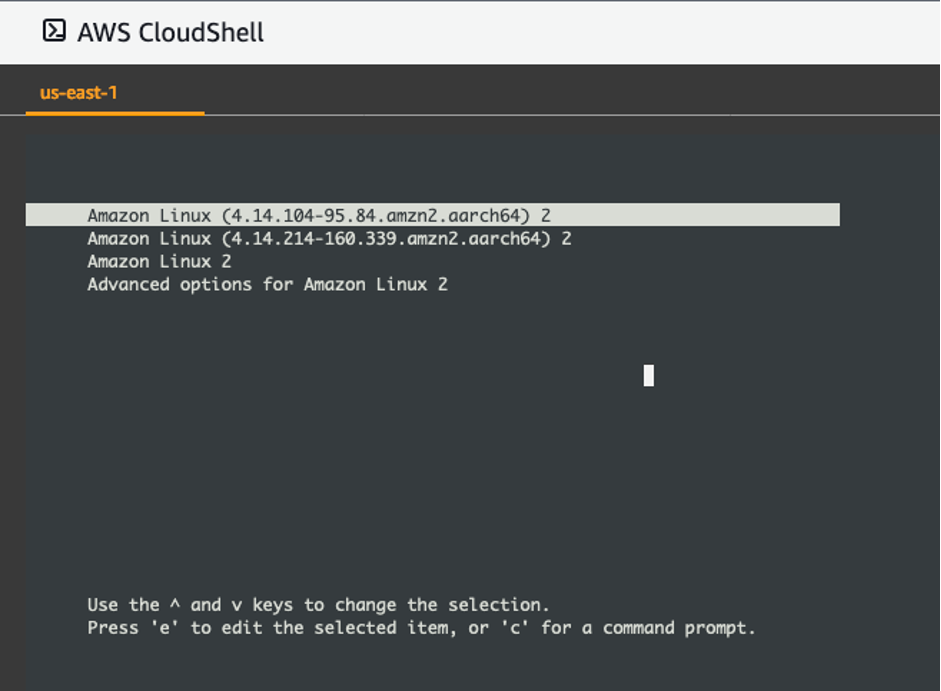 Single user mode boots the kernel at a lower run level. For example, it might mount the file system but not activate the network, which allows you to perform necessary maintenance to fix the instance.

To boot into single user mode

After you’ve finished with the instance you created for this post, you should clean up by deleting the instance. This will prevent you from incurring any additional costs. To delete the instance:

Amazon EC2 shuts down and deletes your instance. After your instance is deleted, it remains visible on the console for a short while, and then the entry is automatically deleted. You cannot remove the deleted instance from the console display yourself.