Previously, customers had to run Spot Instances as self-managed worker nodes in their EKS clusters. This meant doing some heavy lifting such as building and maintaining configuration for Spot Instances in EC2 Auto Scaling groups, deploying a tool for handling Spot interruptions gracefully, deploying AMI updates, and updating the kubelet version running on their worker nodes. Now, all you need to do is supply a single parameter to indicate that a managed node group should launch Spot Instances, and provide multiple instance types that would be used by the underlying EC2 Auto Scaling group.

Before you start using managed node groups with Spot Instances, there are a few best practices to keep in mind. First, remember to use Spot Instances for fault-tolerant applications. Second, to enhance the availability of your applications when using Spot Instances, we recommend you to use more than one instance type in creating a managed node group. Use multiple EC2 instance type generations and variants for your workload. Lastly, to further enhance availability, set up your workload to use all Availability Zones. Note that if your pods are using EBS volumes via PersistentVolumeClaim today, consider persisting the data to an external storage such as Amazon Elastic File System, which works across Availability Zones, and will then allow you to run multi-AZ managed node groups.

When selecting what instance types to use, you can look to all instance types that supply a certain amount of vCPUs and memory to the cluster, and group those in each node group. Although you might see some performance variability in your workload as it runs on different instance types, this flexibility is key in order to provision and maintain your desired capacity while benefiting from steep cost savings. For example, a single node group can be configured with: m5.xlarge, m4.xlarge, m5a.xlarge, m5d.xlarge, m5ad.xlarge, m5n.xlarge, and m5dn.xlarge. These instance types supply almost identical vCPU and memory capacity, which is important in order for Kubernetes cluster autoscaler to efficiently scale the node groups. The EC2 Instance Selector is an open source tool that can help you find suitable instance types with a single CLI command (as seen in the tutorial section of this blog).

The following is an example configuration of EKS managed node groups: 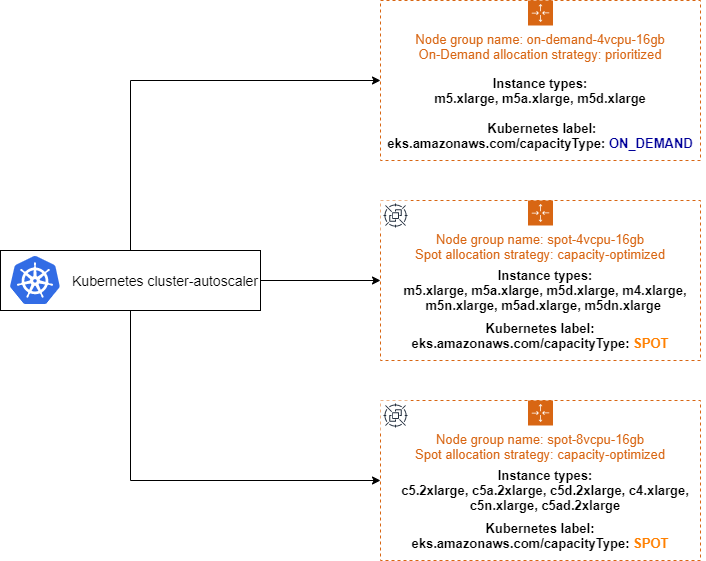 Note that the cluster has one on-demand EKS managed node group for cluster management and operational tools. This is where customers run workloads like datastores, monitoring tools, and any applications that are not interruption tolerant and needs to remain available. The cluster also has multiple EKS managed node groups with Spot Instances, each diversified with similarly sized instance types, in order to tap into multiple Spot capacity pools.

EKS managed node groups with Spot Instances: a look under the hood

In this section, we touch on how EKS configures the underlying EC2 Auto Scaling groups with Spot Instances best practices, as well as manages the Spot worker node lifecycle. The following are default and non-modifiable configurations:

In this tutorial, you create a new EKS cluster and two EKS managed node groups, each running either on-demand or Spot Instances. You also deploy Kubernetes cluster autoscaler and run a demo application to trigger the scale out of Spot Instances. To complete the tutorial, make sure you have eksctl and kubectl installed on your computer or on an AWS Cloud9 environment. You can run the tutorial by using an AWS IAM user or role that has the AdministratorAccess policy attached to it, or check the minimum required permissions for using eksctl.

First, launch an EKS cluster with one managed node group running on-demand instances, as seen in the diagram earlier in the post. You can specify multiple instance types for the on-demand node group. The underlying Auto Scaling group will launch the next instance types in the list in case some instance types are not available for any reason.

Launching the cluster and managed node groups will take approximately 15 minutes. Once this step is complete and eksctl returns a message that the EKS cluster is ready, you can test connectivity to the cluster by checking that the following command shows the nodes are in Ready status.

Next, deploy another managed node group, this time running Spot Instances. For this example, assume that nodes with 4 vCPUs and 16GB of RAM will be suitable for the fault-tolerant workloads that should run on this node group with Spot Instances.

To select suitable instance types, you can use the ec2-instance-selector tool. Below is an example of requesting instance types with the aforementioned number of vCPUs and memory capacity, along with x86_64 CPU architecture, number of GPUs set to 0 because GPUs are not required for this node group, and no burstable (t2, t3) instance types.

Feed the result into the eksctl create nodegroup command below and run it. Note the new eksctl flag to indicate that a node group will run Spot Instances: --spot. The example also specifies --node-max 20 so you can scale out this node group with the test workload using cluster autoscaler.

The node group creation will take approximately four minutes. You can run the following command to confirm that the new two nodes running on Spot Instances were added to the cluster.

You can also check the EKS console compute tab under your cluster, and see the new node group, along with the diversified instance type configuration. 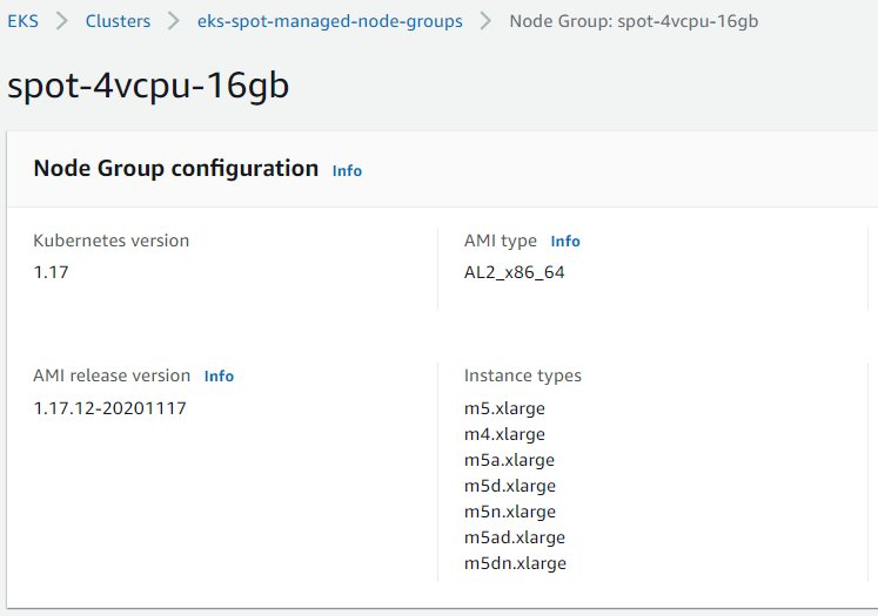 Apply the cluster autoscaler manifest file from the official GitHub repository to your cluster.

Find the line with --node-group-auto-discovery and modify <YOUR CLUSTER NAME> to the right cluster name. In this example, eks-spot-managed-node-groups

Also confirm that the version in the image line is the right major release for your cluster version. For example, if your EKS cluster is running Kubernetes version 1.17, make sure that the image is v1.17.*. Click here to check for cluster autoscaler releases.

Lastly, check that cluster autoscaler started successfully by looking at the logs:

Create a file called nginx-spot-demo.yaml and copy the following snippet into it, then save the file

Apply the manifest file to the cluster:

Confirm that the deployment was successful and that the two nginx-spot-demo pods were scheduled on the Spot worker nodes. You can do that by running kubectl get and instructing to only list the Spot Instances according to their label, and then running kubectl describe to check what pods those nodes have running.

You can also set up the kube-ops-view tool for easily seeing a visual representation of which pods where scheduled on which nodes.

Confirm that some pods could not be scheduled due to lack of instances in the cluster. The following command will show some pods with status pending:

You can also check the cluster autoscaler logs to confirm it identified the pending pods, and have chosen an Auto Scaling group to scale out

You should see lines similar to:

Within 2-3 minutes, all the pending pods will be scheduled on the Spot Instances in the EKS managed node group.

Finally, visit the EC2 instances management console and filter according to the node group name: spot-4vcpu-16gb. Confirm that Spot Instances were launched across the different Availability Zones. You might see different instance types launched in the node group depending on which instance types were selected by the capacity-optimized allocation strategy from the most available Spot capacity pools.

Delete the resources that you created in the tutorial

You can now use EKS managed node groups to launch Spot Instances via the AWS CLI, AWS Management Console, API/SDKs, CloudFormation, Terraform, and eksctl (from version 0.33). With this launch, we further enhance the Amazon EKS experience and enable you to leverage Spot Instances without added operational overhead from running self-managed EKS worker nodes, and optimize your EKS clusters for cost, scale, and resilience. There are no additional costs to use EKS managed node groups, you only pay for the AWS resources that are provisioned.

Deepthi is a Senior Product Manager in the EC2 service team, working on EC2 Spot Instances.