To use App2Container to analyze, transform, and deploy applications to Amazon ECS or Amazon EKS or AWS App Runner these steps should be performed.

The App2Container workflow involves a series of tasks (install, discover, analyze, extract, containerize, generate deployment, and deploy) that must be orchestrated across application and worker servers. When you use App2Container to migrate multiple servers, it becomes overwhelming to manage and track the progress of each workflow manually. It increases the chances of human error and slows down the migration effort. If the application server has no access to the internet, you cannot install prerequisites like Docker. Or if the server does not have sufficient hardware resources, you cannot execute App2Container to containerize the applications running on it. In scenarios like these, a worker server will help perform the tasks of containerizing the applications, generating deployment artifacts, and provisioning on the target AWS account.

Customers who have a large portfolio of applications to migrate will have multiple application servers. In this scenario, an automated solution to centrally manage and track the App2Container workflow is helpful. By automating the workflow to execute the previously mentioned tasks on the application and worker servers using an Ansible playbook, you get the following benefits:

You can execute the playbook from the worker server or the proxy instance and can containerize multiple application servers in parallel.

To further optimize the Docker image size, consider identifying the required, irrelevant files and add them to the appropriate list (appExcludeFiles and appSpecificFiles). The playbook creates a separate AWS CloudFormation stack for each application to be containerized. Use Docker version 17.07 or later. 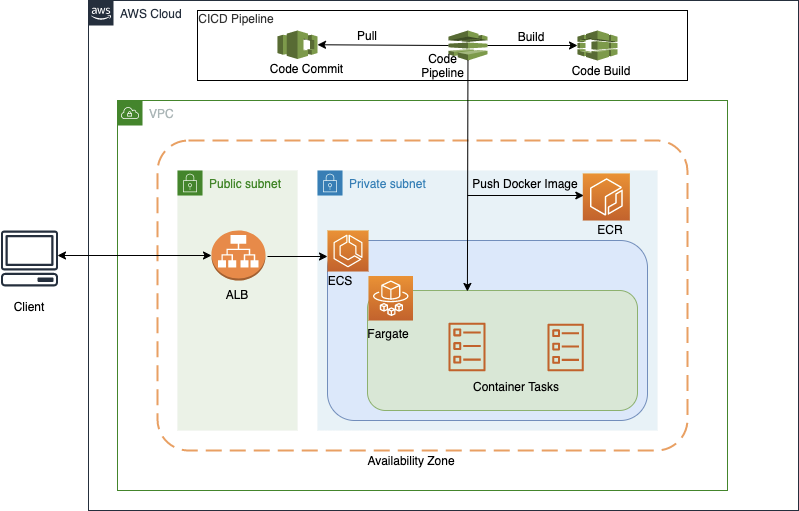 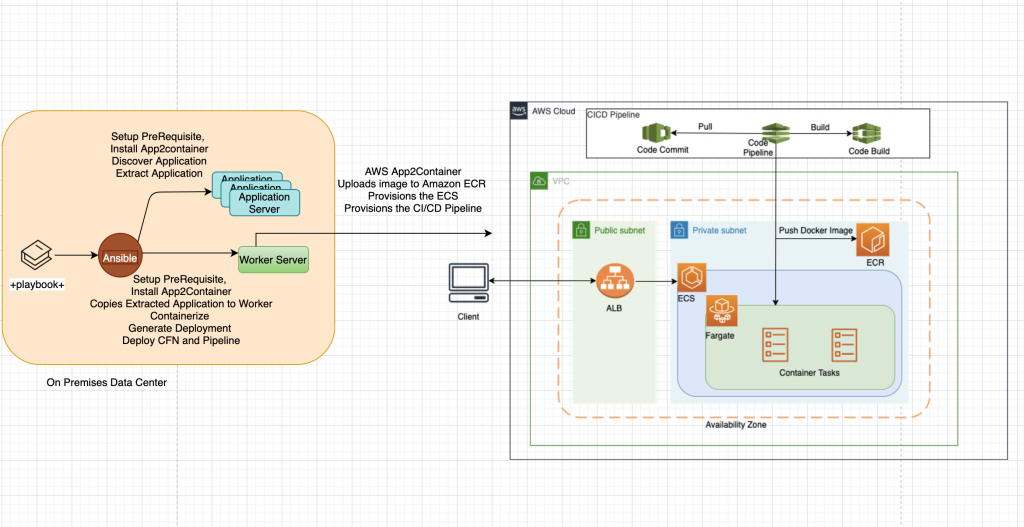 You can install Ansible on the worker server. If there is no direct connectivity between the application server and the worker server (as shown in the preceding diagram), then you must use a proxy to complete the route. In this case, you can install Ansible on the proxy instance and it will run the tasks connecting to the application and the worker servers. AWS CodePipeline is triggered when the AWS CodeCommit repository has new commits. The pipeline uses AWS CodeBuild to build a new Docker image, push it to an Amazon Elastic Container Registry (Amazon ECR) repository, and deploy the image to the target serverless compute engine, AWS Fargate.

Configure an AWS profile on the worker node using the keys for this IAM user.

Create an S3 bucket with read/write access to the IAM user created in the previous step. Update the S3 bucket information in the Ansible configuration file.

Set up the App2ContainerAutomation project by cloning the Ansible playbook to the Ansible Host. Use this command to clone the automation scripts from the repository:

Modify the Ansible variables to suit your requirements. You can set the mandatory variables through the command line while running the playbook or by editing the main.yml file in the vars folder. You’ll find the definitions for each variable in the readme. Update their values as required.

Use the following command to run the Ansible playbook.

After you have provided the required inputs for Ansible and the playbook has been executed from the worker server or proxy instance, Ansible automates the entire workflow. There are a total of 28 steps that include discovering the application, extracting the application, copying to worker server, containerizing, generating the CloudFormation template, uploading the Docker image to Amazon ECR, creating an AWS CodePipeline pipeline for CI/CD, provisioning the required compute infrastructure on Amazon ECS or Amazon EKS, and deploying the image.

An Amazon ECR repository is created.

An AWS CloudFormation stack is created with name prefixed by a2c-.

To test the application, go to the Outputs section of the CloudFormation stack, copy the PublicLoadBalancerURLDNSName link, and then open it in the web browser or command line.

An AWS CodeCommit repository is created. To trigger a new image build by AWS CodePipeline, update the Dockerfile. AWS CodeBuild will build a new Docker image and upload it to the Amazon ECR repository. AWS CodeDeploy will deploy the new Docker image to the target compute environment of Amazon ECS or Amazon EKS.

You can use Ansible tags to run specific stage in the App2Container workflow. This feature can be used to run each stage at a time or rerun any specific stage manually multiple times during troubleshooting.

In this post, we showed how you can use Ansible to automate the AWS App2Container workflow by configuring the parameters used by the tool. Readme.md. If your use case requires more customization, you can extend this playbook and define additional configuration options.