AWS Copilot CLI is an open-source command line interface that makes it easy for developers to build, release, and operate production-ready containerized workloads on AWS App Runner, Amazon Elastic Container Service (Amazon ECS), and AWS Fargate. Under the hood, Copilot uses AWS CloudFormation for provisioning and managing the underlying infrastructures on your behalf so that you can focus on your business logic and the architecture of your application.

AWS App Runner recently announced AWS X-Ray support as part of its observability suite. For more information, visit AWS Blog | Tracing an AWS App Runner service using AWS X-Ray with OpenTelemetry. With this release, you can send traces from your App Runner services without having to set up the required sidecars or agents yourself. You can trace your containerized applications in X-Ray by instrumenting applications with the AWS Distro for OpenTelemetry (ADOT).

AWS Copilot supports this feature from the day of launch. You can easily deploy an App Runner service with X-Ray tracing enabled by using Copilot CLI. If you are not yet familiar with AWS Copilot, there is a small section in step 1 that briefly introduces some Copilot terminologies. To learn more, you can also check out this introduction to AWS Copilot and, of course, the official Copilot documentation.

The following walkthrough demonstrates how to use AWS Copilot CLI to enable X-Ray tracing for App Runner services:

In addition to the application code, the repository contains a copilot/ directory. In this folder, you can find:

If you are new to Copilot, the following are some of the terminologies to get familiar with.  Otherwise, feel free to skip to 2. Deploy a Copilot application.

The following is a snippet of the copilot/api-svc/manifest.yml:

Note: X-Ray tracing configuration is commented out at this moment.

The DynamoDB table is configured in copilot/api-svc/addons/moviesTable.yml. When Copilot deploys a service, it picks up the CloudFormation templates from the addons/ folder and deploys those resources alongside the service.

Note: If the Copilot binary is missing or is outdated, follow the Copilot installation guides to install or update it.

After the deployment, you should be able to access the URL shown in the output. 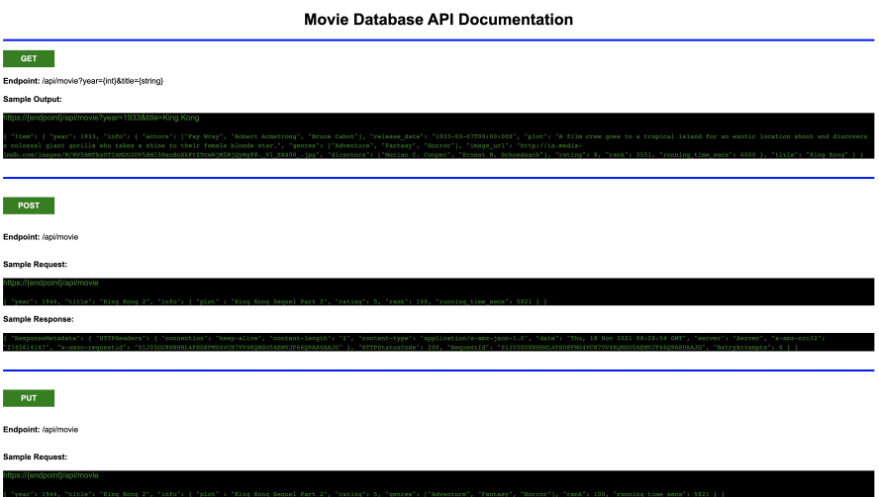 Note: The X-Ray tracing is not enabled yet. We will do that later!

3. Check out the resources (optional)

Copilot provisioned all resources through CloudFormation, including the necessary IAM roles, the DynamoDB table, as well as the App Runner service named movies-app-test-api-svc.

From the App Runner console in your Region, you should be able to confirm that the service was created:

You can also go to the CloudFormation console to check out the resources that Copilot has provisioned: 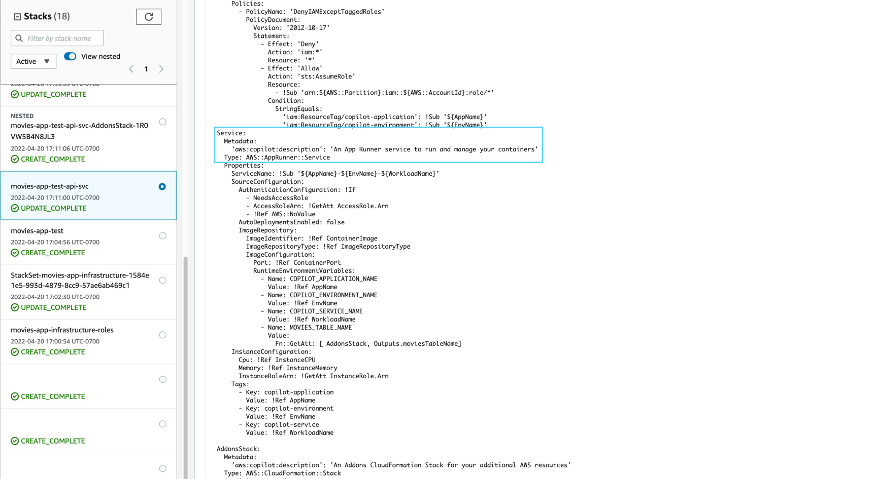 To easily view the summary of your "api-svc" service’s configurations, use  copilot svc show:

At this point, we have successfully deployed a working web application with AWS CoPilot running on AWS AppRunner. Now is the exciting time to enable X-Ray tracing!

1. Enable tracing from the manifest file

Uncomment these two lines in your copilot/api-svc/manifest.yml file:

so that a part of your manifest looks like this:

2. Deploy your service with the tracing configuration 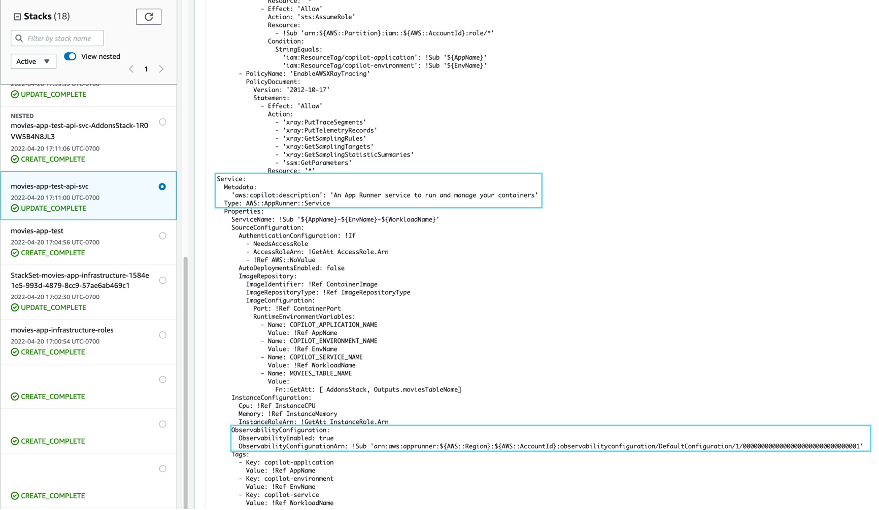 You can go to the App Runner console in your Region and check out the updated service. The tracing configuration is now enabled for "api-svc".

At this point, X-Ray tracing has been enabled for your App Runner service successfully!

The snippet shown will generate traces that involve an App Runner service only. This means you will see only the “AppRunner Service” node in CloudWatch’s service map in step 3. This is because the root endpoint does not need to connect to the DynamoDB table.

To generate traces that involve your DynamoDB table, follow these instructions to populate your DynamoDB, and then hit https://<Random string>.<Your AWS region>.awsapprunner.com/api/movie?year={int}&title={string}. For example: 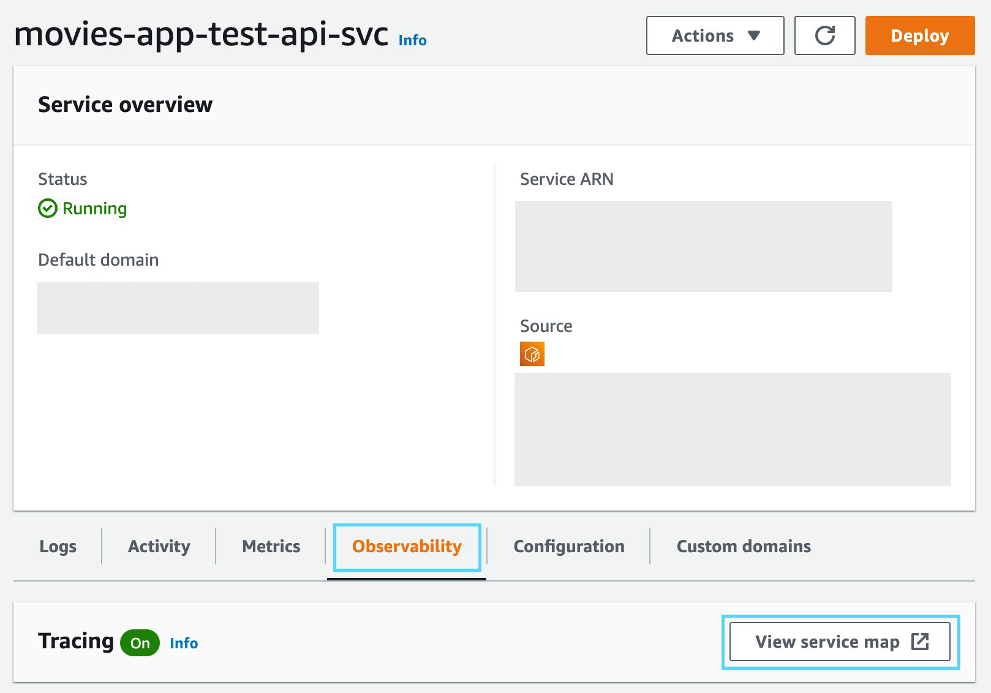 With AWS Copilot CLI, you can enable or disable X-Ray tracing for your App Runner service simply by toggling two lines in your service manifest. AWS Copilot is an open-source tool, and you can check out our incremental features on our sprint board.  We encourage you to get involved by creating GitHub issues or joining the conversation on Gitter!

There are more resources to learn about AWS App Runner X-Ray integration and AWS Copilot CLI. We encourage you to check these out!