Build a real-time gaming leaderboard with Amazon ElastiCache for Redis

In this post, I explore the challenges around building and scaling gaming leaderboards using traditional relational databases. I also examine how to leverage modern in-memory data stores such as Redis to provide a highly efficient and scalable solution.

This proposed solution pushes leaderboard storage and querying away from the relational database toward the more versatile Amazon ElastiCache for Redis. The approach outlined here applies not only to gaming leaderboards, but generally to any situation for generating ranking within an application.

Using traditional relational databases, the steps to build a basic leaderboard are straightforward. Typically, these include:

This table exemplifies the most basic leaderboard schema. Some implementations would add more information, such as a game_id value to reference a different game, or a timestamp to break a tied score. But the underlying concept of how to query and update the leaderboard remains the same.

Here’s the create table script to execute a basic leaderboard:

In this instance, I’ve added indexes on user_id as well as score for faster joins and ordering. Scores are incremented or decremented using atomic SQL statements such as the following:

As long as the number of concurrent game users remains low to moderate, this design provides sufficient leaderboard functionality. But as concurrent game access increases, this schema becomes difficult to scale:

Rank computation for specific players can be expensive, especially for larger tables. For instance, consider the following query:

Given the nested query to compute the user’s ranking, the time complexity is quadratic. It takes an average of 35 seconds to run the query for a table with 50 million records even with indexes. Because the scores and rankings are constantly changing, the results can’t be easily cached.

An ideal solution provides predictable performance even as the number of users increases. Also, such a solution allows easy access to common leaderboard-related operations (for example, retrieving lowest scores or retrieving similar players by score), without having to resort to slow and complex queries.

Redis offers one highly efficient and scalable solution. Redis is an in-memory data store that supports basic key-value functionality. It also supports a variety of data structures such as hashes, lists, sets, sorted sets, range queries, and geospatial indexes. This suggests the potential advantages of storage and querying through ElastiCache for Redis instead of through relational databases.

The ElastiCache for Redis approach has the following benefits:

ElastiCache is a fully managed, low latency, in-memory data store that supports either Memcached or Redis. With ElastiCache, management tasks such as provisioning, setup, patching, configuration, monitoring, backup, and failure recovery are taken care of, so you can focus on application development.

Specific to Redis, ElastiCache lets you “scale in” or “scale out” both reads and writes. Cluster mode offers added shard support, enabling write scaling. It supports up to 250 shards, giving you up to 170.6 TB of in-memory data. Online cluster resizing enables zero downtime scaling in or out of shards. You can also automate scaling in response to Amazon CloudWatch alarms. To scale reads, you only need to add more read replicas.

Sorted sets contain a list of members with associated scores. Although set members are unique, score values are permitted to repeat. Scores are used to rank the list in ascending order.

One key difference between sorted sets and relational databases is when the tool sorts the list. During insert or update operations, sorted sets automatically position the item in the right order. Because of this pre-sorting, queries run significantly faster. You can quickly and efficiently query the middle of the list or get the rank of a specific member. Sorted sets finds specific rankings logarithmically, proportional to the number of members.

Here are some key commands that you can run with sorted sets to build leaderboards:

To demonstrate how these features interact, I’ve created the following demo application. The high-level architecture is shown in the following diagram. 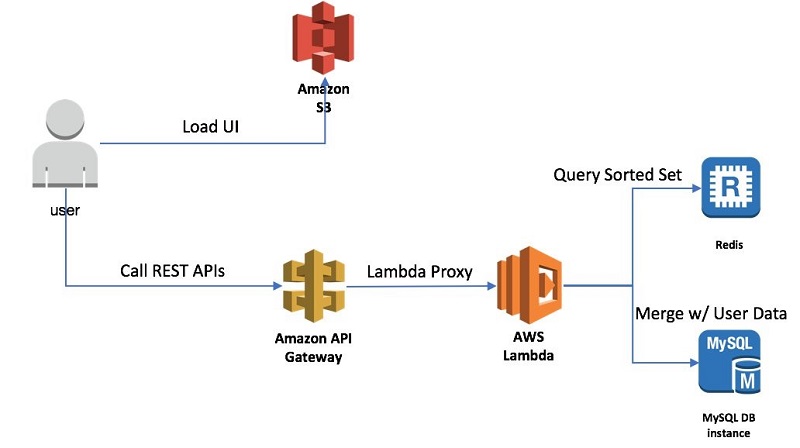 To test how all these elements work together, launch the AWS CloudFormation stack. The stack creates the following resources:

The following table lists the functions created by the AWS CloudFormation stack for the demo application.

The AWS CloudFormation template also creates APIs that act as proxy to the Lambda functions. The structure of the APIs is as follows:

The following table lists the parameters created by the AWS CloudFormation stack for the demo application.

I’ve preloaded both databases with 1 million users/scores. For MySQL, the database has two tables: users and leaderboard. For Redis, the sorted set key is leaderboard. Data for both MySQL and Redis are similar, so you can quickly do a comparison of the query response times.

Accessing the frontend and backend

After AWS CloudFormation finishes building the stack, you can find two URLs in the Output tab of your stack. The following screenshot shows an example.

The APIGatewayInvokeURL is the URL for the REST API backend. To see the actual payloads that return, make API calls directly to this endpoint. For more information, see the previous API Gateway section.

The FrontendURL can be directly opened in the browser to see the demo application. The following screenshot shows an example. 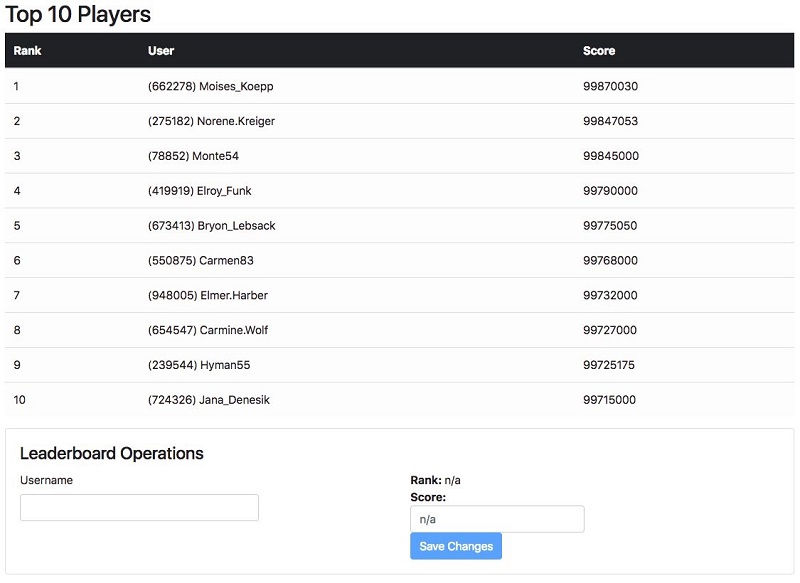 Before the demo application can send commands to the Redis instance, you must complete the following tasks:

Because the demo application uses Node.js, install the library by running the following command:

After the library is installed, you can connect to the Redis instance by creating a client object with the following commands:

The following are common leaderboard operations and their corresponding Redis commands:

To insert or update player score, use the following command:

The following command retrieves the score for the given user ID. I used user_id as the member identifier when I inserted the member with their score using the zadd command:

There are two commands to retrieve the range of users: zrange and zrevrange. For the demo application, use zrevrange because the players with the highest score are higher up in the ranking:

As with retrieving the list of users, there are two commands to retrieve the rank of a user: zrank and zrevrank. For this demo application, use the zrevrank because the players with the highest score have a higher rank:

ElastiCache supports online cluster resizing, which enables zero downtime scaling in or out of shards. Resizing can be done in response to a CloudWatch alarm to accommodate peak and non-peak traffic.

The API that does the resizing is ModifyReplicationGroupShardConfiguration, which can add additional shards, remove shards, or rebalance the key spaces among existing shards.

Using the right data storage for the right use cases and accounting for data access patterns can reap not only significant performance gains, but also can provide a cost-efficient solution.

Aside from sorted sets, Redis provides other data structures that are useful in the context of the gaming industry. The Redis documentation also provides the time complexity for each command, so you have an idea how the performance scales as your users increase.