We’re excited to announce a new feature of AWS Database Migration Service (AWS DMS) that allows you to move a replication task from one replication instance to another. With this feature, you can stop a running migration, move the task to an instance with a newer AWS DMS version or different instance type, and resume the migration from where you left off. The state and properties of the migration captured through the replication task remain as they were before.

This post shows you how to stop a running migration, move the task to a different replication instance, and resume the migration from where it stopped.

Moving a task is applicable in the following use cases:

Before running the move operation, let’s get familiar with some terms:

Before getting started, we recommend reviewing the user guide and reference docs for this API.

Moving a replication task with the AWS CLI

Before you complete these steps, store the replication task ARN and target replication instance ARN. The following are sample values:

Moving a replication task via the AWS DMS console

To use the AWS DMS console to transfer your replication task to another instance, complete the following steps: 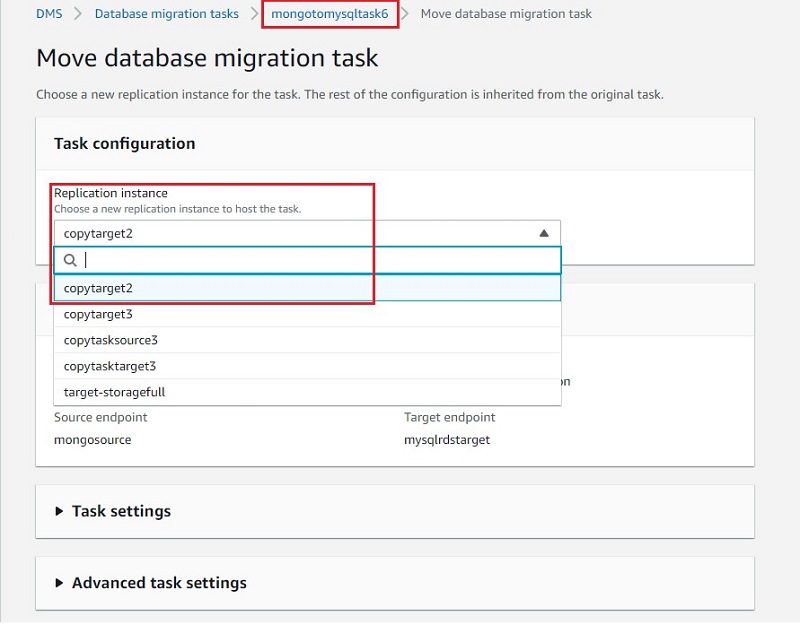 The status of the task should change to Moving.

When the move is complete, the status changes back to its earlier status (in the following screenshot, it changes to Stopped).

You can verify the task is moved to the target replication instance on the Overview details tab.

For more information about this feature and our service, see our documentation. Feel free to innovate and use this feature to suit your business needs. Happy migrating!

Sanketh Balakrishna is a Software Development Engineer with the Database Migration Service team at Amazon Web Services. He works on the design and development of customer requested features, and contributes to improving the overall security of DMS. He is the lead developer for the move replication task project.

Viqash Adwani is a Database Engineer with Database Migration Service team at Amazon Web Services. He works with internal and external customers to provide guidance and technical assistance in migrating their on-premises database environment to AWS cloud, helping them improve the value of their solutions when using AWS.