The PostgreSQL community releases a new major version yearly, with a defined end of life (EOL) policy of older major versions. This allows you to make version and upgrade decisions well into the future. The community EOL policy is to support a major version for 5 years after its initial release. After the fifth year, a major version has one final minor release containing any fixes, and is then considered EOL and no longer supported. For the final release dates of all versions of PostgreSQL, see Versioning Policy. For Aurora version policy , see Amazon Aurora Versions.
The next major version to reach EOL is 9.6, which is happening on November 11, 2021. The following table summarizes the EOL support for Amazon RDS for PostgreSQL and Aurora PostgreSQL.

To find out if you have any 9.6 instances in a given Region, on the Amazon RDS console, navigate to the Depreciated major versions section on the Recommendations page. 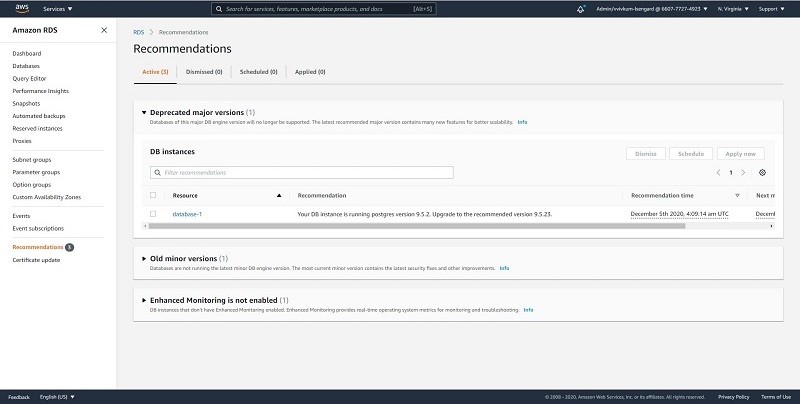 We recommend upgrading all the instances to PostgreSQL 12 or newer, but there may also be business reasons why upgrading to a different major version is necessary. For example, some applications aren’t yet certified on PostgreSQL 12 and must move to a slightly earlier version. When manually upgrading ahead of the automatic upgrades, you can choose the version of PostgreSQL that best meets your needs.

Upgrade targets for Amazon RDS for PostgreSQL and Aurora PostgreSQL

We recommend that you first upgrade to minor version 9.6.20 or greater and then upgrade directly to PostgreSQL 12 or greater so that you can skip intermediate major versions.

The following table summarizes the upgrade targets for Amazon RDS for PostgreSQL.

The following table summarizes the upgrade targets for Aurora PostgreSQL.

The following table lists some of the major features across all the versions.

There are two options to upgrade the major versions: in-place and side-by-side. Choosing one option over the other primarily depends on how much downtime your business can afford and complexity involved in the upgrade process. An in-place upgrade can be done using an in-built feature but typically needs downtime during the upgrade process. In contrast, a side-by-side upgrade reduces the downtime because the upgrade happens on the copy of the database, but it takes several steps to configure continuous replication with the new database instance until the cutover happens.

Both Amazon RDS and Aurora support in-place upgrades, which use the pg_upgrade utility, which is safest. This option is less complex because it’s a feature of the managed service; AWS takes care of the heavy lifting and makes multi-version upgrades seamless.

Downtime required for an in-place upgrade primarily depends on the size and number of the objects in the database. Choose this option if your business can afford the downtime with the fewest administration tasks.

The following are the high-level steps for side-by-side upgrade. Actual steps needed may vary depending on your environment and the type of synchronization method you choose.

The following table shows the synchronization methods available for Amazon RDS and Aurora. Choosing one method over the other primarily depends on the product (Amazon RDS or Aurora) and the duration and complexity involved in configuring synchronization.

Option A: Logical replication (Amazon RDS for PostgreSQL only)

This process has the following advantages:

Option B: AWS DMS with CDC (Amazon RDS for PostgreSQL 9.6 only)

This option has the following advantages:

Bucardo is asynchronous trigger-based replication with primary-secondary architecture. Bucardo requires a dedicated database and runs as a Perl daemon that communicates with this database and all the databases involved in replication.

This process has the following advantages:

Now is the time for you to upgrade all your PostgreSQL 9.6 instances. You can initiate upgrades at any time from now to before the auto upgrade date (February 22, 2022, for Amazon RDS and February 15, 2022, for Aurora) whether or not they are in a maintenance window to allow time to test your applications.

Depending on the approaches taken, (in-place or side-by-side upgrade), you should perform a dry run using the selected approach on a copy of the production database instance to estimate the time needed and prepare for the final production upgrade.