Customers running on an on-premises environment often face the challenges of scalability, performance, cost, and reliability. To increase resiliency, performance, and scalability, AWS has become the new norm to help and offer companies the benefits of the AWS Cloud.

In this post, we use Oracle Real Application Testing (Oracle RAT) to help you evaluate differences between on-premises database workloads and database workloads running on Amazon Elastic Compute Cloud (Amazon EC2). Amazon EC2 offers the broadest and deepest compute platform with choice of processor, storage, networking, operating system, and purchase model. It provides you with complete control of your computing resources and lets you run on Amazon’s proven computing environment.

Oracle RAT is a tool that helps you evaluate the effect of any database system changes on real-world applications in a test environment before you deploy the change in the production environment. With Oracle RAT, you can capture the workload run on your production database system and replay it on a test environment to help analyze the difference between running workloads on premises and Amazon EC2. Oracle RAT includes features such as Database Replay and SQL Performance Analyzer (SPA) to test the effect of system changes on real-world applications:

Before performing the capture and replay of workloads using Oracle RAT, consider the following key prerequisites:

For this walkthrough, the following prerequisites are necessary:

In this post, we set up database replication using Oracle Dataguard from on premises to Amazon EC2 to use Oracle RAT. The following diagram illustrates this architecture.

The following diagram illustrates this workflow. 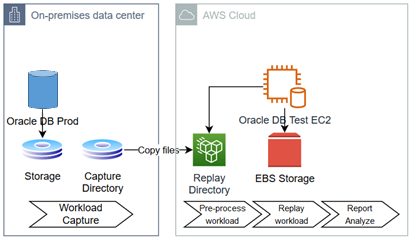 Set up analysis before start of capture

You need to prepare the on-premises database before starting the capture workload using Oracle RAT. This includes creating a database user and granting admin privileges, and creating the directory where the capture files will be stored. Run the steps in the following code on the on-premises Oracle database:

To convert the physical standby to snapshot standby, run the following commands on the standby database running on the EC2 instance:

Start capture on the on-premises database

Now that the database is ready to process the capture, run the following command on the on-premises production database server to start the capture. Make sure that the capture window includes peak loads for accurate comparison.

Let the capture run for at least 1 hour. We recommend starting smaller capture windows and extending the duration after you successfully test on a smaller window. From our experience, the ideal duration is 2 hours.

After the capture duration window has elapsed, you can finish the capture by running the following command on the on-premises production database:

To avoid too many idle sessions, we recommend using a timeout of 2 minutes or more while finishing the capture so that the capture waits for sessions to flush its capture buffers.

You can alternatively use Oracle Enterprise Manager to do the same steps, which provides a GUI tool for convenience.

Workload capture reports are important for identifying the system timestamp of when the workload was run, in case we need to reset the system clock on the test server to minimize divergence. These reports also contain information regarding the utilization of the server, SQL statistics, top waits, and much more, which we use to compare the performance on the on-premises and test servers in Amazon EC2.

To generate the capture workload report in the capture directory, run the following command on the production database server:

We need to analyze the data that was captured for its performance in terms of the database statistics, runtime, database server utilization, and so on. We can do this by exporting the AWR data for the workload capture and importing it into a test Amazon EC2 database server (discussed in upcoming steps). This is an important step to help with performance analysis.

To export the AWR data, run the following command:

SQL Performance Analyzer is one of the solutions used in Oracle RAT. This includes creating a SQL tuning set for the workload, as discussed in the previous steps. The SQL tuning set is then exported from the production database server to be imported on the test server for performance comparison.

To create a SQL tuning set for the captured workload, use the snapshot IDs in the AWR that correspond to the time the capture was run. The information on the timestamp is available in the capture report generated in previous step. The following code is the snippet of commands to run on the on-premises production database server:

In the previous step, you created the SQL tuning set table, which has all the SQLs that were run during the workload capture window. We need to export this table from the production on-premises server to the test server on Amazon EC2 to help evaluate the performance.

To export the table, use the Oracle datapump utility:

The preceding command creates the file SQLSET_DUMP.dmp in the capture directory, which you need to copy with all other files to the target test server, as shown in the next step.

You now need to copy all the files that were created in the capture directory, like capture workload files and the dump file for the SQL tuning set, to the test server running on Amazon EC2. You can use any standard copy tool to transfer the files to the EC2 instance, such as scp or sftp. If the files are large, then scp or sftp transfer may take a long time. In this case, you can consider an alternate option of using AWS Storage Gateway to mount an Amazon Simple Storage Service (Amazon S3) bucket on an EC2 instance and on the on-premises database server pointing to the same S3 bucket to avoid transferring of data. For instructions, see Using AWS Storage Gateway to store Oracle database backups in Amazon S3.

Before processing the files, it’s important to run the workload analyzer, which gives us details on what percentage of the workload was captured and if there are any findings and recommendations. The following screenshot shows a sample report. 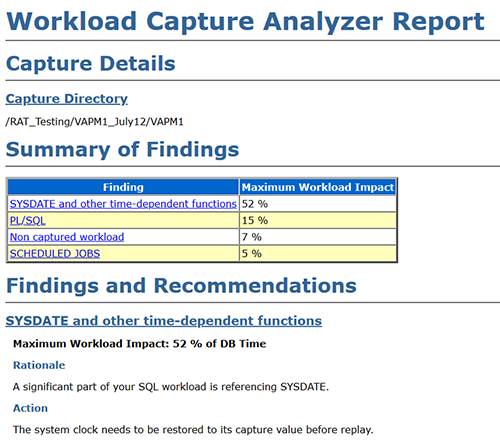 To run the workload capture analyzer, run the following command on the test database server running on Amazon EC2. Make sure the server has Java installed on it for the command to work:

SQL Performance Analyzer helps show how SQLs running on premises differs from running on Amazon EC2. To run a test for analysis, complete the following steps:

Now that the baseline is created and the SQL tuning set has been run, we can collect performance data for comparison between the two using SQL Performance Analyzer.

When the comparison analysis is complete, you can generate a report to identify the SQL statements that have improved, remained unchanged, or regressed due to the system change.

In the previous section, we completed running SPA in Oracle RAT. To proceed further with database replay testing, we need the database to be in the same SCN as when the capture was started. This requires the database to be rolled back to a point in time, therefore a flashback of the database to a restore point is necessary. To flashback the database, you can run the following command on the snapshot standby database running on Amazon EC2:

Prepare the database for replay

The database needs to be prepared to replay the workload. After the database flashback is complete, you need to create a database directory pointing to the capture files directory that was copied onto the target test database server by running the following command on the snapshot standby database:

Disable the advisor jobs so that they don’t interfere with the replay of the workload or cause any divergence. To disable the job, run the following command on the snapshot standby database:

If the workload analyzer report that was run earlier suggests that a high percentage of the workload is dependent on system time, then it’s important to reset the system clock on the database server to the point in time of capture. If you’re using a Linux database server, see How to Set Time, Timezone and Synchronize System Clock Using timedatectl Command for instructions to update the system time on the standby server running on Amazon EC2.

The capture workload files need to be processed. We can do this using the following command on the test database server. This command analyzes the workload capture found in the capture directory and creates new workload replay specific metadata files that are required to replay the given workload capture. It only creates new files and doesn’t modify any files that were originally created during the workload capture. Therefore, you can run this procedure multiple times on the same capture directory, such as when the procedure encounters unexpected errors or is canceled by the user. After you process the capture directory, you need to initialize the replay. If necessary, you may need to remap connections to a new one so that the user sessions can connect to the database as desired during workload replay, after which the database needs to be prepared to run the workload.

The replay client is an executable named wrc located in the $ORACLE_HOME/bin directory, which is a multithreaded program where each thread submits a workload from a captured session. You need to run the following command as an Oracle user in a separate session on the test database server. You can run the command in calibrate mode to get a suggestion of the number of clients to run, and then run it in processing mode.

You can now start the replay of the workload with the following code, and all the external replay clients (WRC) that are currently connected to the replay database are notified automatically:

These clients then begin issuing the captured workload to replay it on the test database.

The analysis generated from the database replay reports can help give insights regarding database utilization, divergence levels, top waits, top SQLs, and other statistical information.

To generate the workload replay report, run the following commands on the test database server:

When you’re done using this solution, you can delete the capture files from the source self-managed instance and preprocessed files from the preprocessing system and replay client system. You should also stop or terminate any EC2 instances that you provisioned exclusively for hosting some of the components of the Database Replay feature, such as the replay client. If you used an S3 bucket to transfer files, you should delete the bucket if no longer needed.

In this post, we used Oracle RAT to help analyze statistical information and gain insight into whether your on-premises Oracle workload can run successfully on Amazon EC2 without degradation in performance.

We created the SQL Performance Analyzer report in Oracle RAT, which calculates two chief impact measurements of each SQL statement:

We performed database replay by replaying the workload on an Amazon EC2 Oracle database server with the workload that was captured in the on-premises environment. During the database replay, we observed the divergence level and differences of hardware resource utilization, which are the key metrics to consider while making the decision to migrate.

If you have any comments or questions, leave them in the comments section.

John Lonappan is a Senior Database Specialist Consultant / Solutions Architect at Amazon Web Services (AWS) with a focus on relational databases. Prior to AWS, John has worked as a Database Architect for large Data center providers across the Globe. Outside of work, he is passionate about, Long drives, EV Conversion, playing chess and traveling.

Saumya Mula is a Database Consultant with the Professional Services team at Amazon Web Services. She works as a database migration consultant to provide Amazon customers with technical guidance to migrate their on-premises databases to AWS.

Jobin Joseph is a Senior Database Specialist Solution Architect based in Dubai.
With a focus on relational database engines, he assists customers in migrating and modernizing their database workloads to AWS. He is an Oracle Certified Master with 20 years of experience with Oracle databases.