This is a guest post from Trevor Sullivan, a Seattle-based Solutions Architect at Amazon Web Services (AWS). In this blog post, Trevor shows you how to deploy a Windows Server-based container cluster using the AWS Tools for PowerShell.

Building and deploying applications on the Windows Server platform is becoming a significantly lighter-weight process. Although you might be accustomed to developing monolithic applications on Windows, and scaling vertically instead of horizontally, you might want to rethink how you design and build Windows-based apps. Now that application containers are a native feature in the Windows Server platform, you can design your applications in a similar fashion to how developers targeting the Linux platform have designed them for years.

Throughout this blog post, we explore how to automate the deployment of a Windows Server container cluster, managed by the Amazon EC2 Container Service (Amazon ECS). The architecture of the cluster can help you efficiently and cost-effectively scale your containerized application components.

Due to the large amount of information contained in this blog post, we’ve separated it into two parts. Part 1 guides you through the process of deploying an ECS cluster. Part 2 covers the creation and deployment of your own custom container images to the cluster.

This article was authored, and the code tested, on a MacBook Pro with PowerShell Core Edition and the AWSPowerShell.NetCore module.

If you prefer to use the AWS PowerShell module to create the empty ECS cluster, you can use the following command. 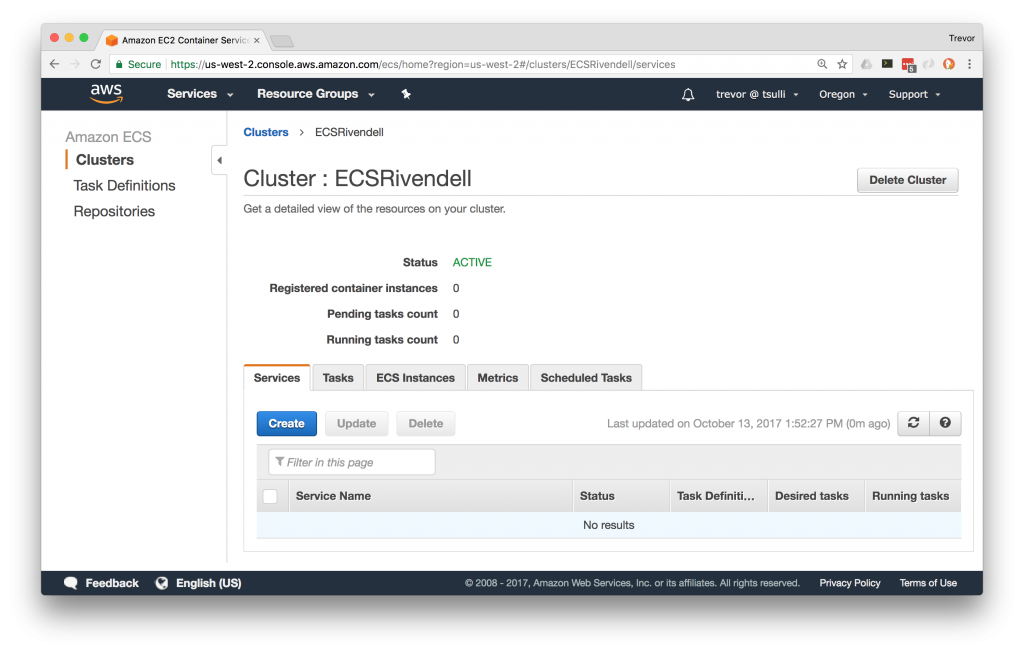 Set up an IAM role for Amazon EC2 instances

Before you actually deploy the Windows Server compute layer for your ECS cluster, you must first perform the following preparation steps:

Create an IAM policy for your EC2 container instances

The next part is easy. You just need to create an IAM role. This role has a name, optional path, optional description and, the important part, an “AssumeRolePolicyDocument”. This is also known as the IAM “trust policy”. This IAM trust policy enables the EC2 instances to use or “assume” the IAM role, and use its policies to access AWS APIs. Without this trust policy in place, your EC2 instances won’t be able to use this role and the permissions granted to it by the IAM policy.

Now you simply need to associate the IAM policy that you created with the IAM role. This association is very easy to make with PowerShell, using the Register-IAMRolePolicy command. If necessary, you can associate more than one policy with your IAM roles that grant or deny additional permissions.

Associate the IAM role with the instance profile

Finally, you need to associate our IAM Role with the instance profile.

Now that you’ve created an empty ECS cluster and have pre-staged your IAM configuration, you need to add some EC2 compute instances running Windows Server to it. These are the actual Windows Server instances that will run containers (tasks) via the ECS cluster scheduler.

To provision EC2 capacity in a frugal and scalable fashion, we create an EC2 Auto Scaling group using Spot instances. Spot instances are one of my favorite services in AWS, because you can provision a significant amount of compute capacity for a huge discount, by bidding on unused capacity. There is some risk that you might need to design around, as Spot instances can be terminated or stopped if your bid price is exceeded. However, depending on your needs, you can run powerful applications on EC2, for a low price, using EC2 Spot instances.

Although the code snippet below might look a little scary, it basically contains an EC2 user data script, which I copied directly from the AWS beta documentation for Windows. This automatically installs the ECS container agent into new instances that are brought online by your Auto Scaling Group, and registers them with your ECS cluster.

Be sure you give your EC2 container instances enough storage to cache container images over time. In my example, I’m instructing the launch configuration to grant a 200 GB Amazon EBS root volume to each EC2 instance that is deployed into the Auto Scaling group, once it’s set up. 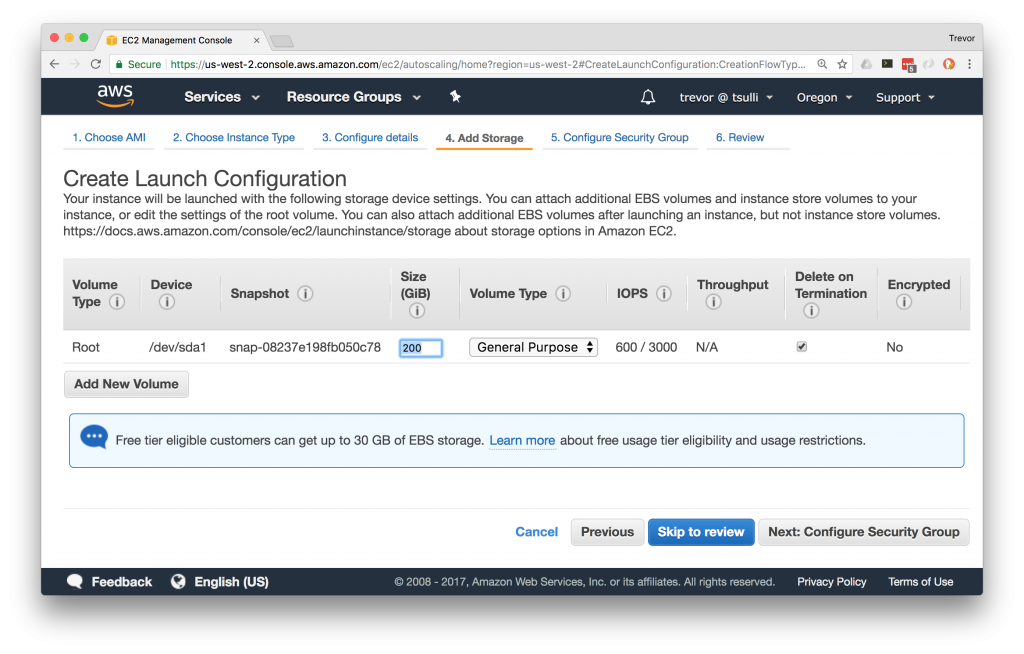 The PowerShell code to create the Auto Scaling group, from the launch configuration that you built, is included below. Keep in mind that although I’ve tried to keep the code snippets fairly generic, this particular code snippet does have a hard-coded command that retrieves all of your Amazon Virtual Private Cloud (VPC) subnet IDs dynamically. It should work fine, as long as you only have a single VPC in the region you’re currently operating in. If you have more than one VPC, you’ll want to filter out the list of subnets from the Get-EC2Subnet command that are contained in the desired target VPC.

After running this code snippet, your Auto Scaling Group will take a few minutes to deploy. Additionally, it can sometimes take 15-30 minutes for the ECS container agent, running on each of the EC2 instances, to finish registering with the ECS cluster. Once you’ve waited a little while, check out the EC2 instance area of the AWS Management Console and examine your shiny new container instances! 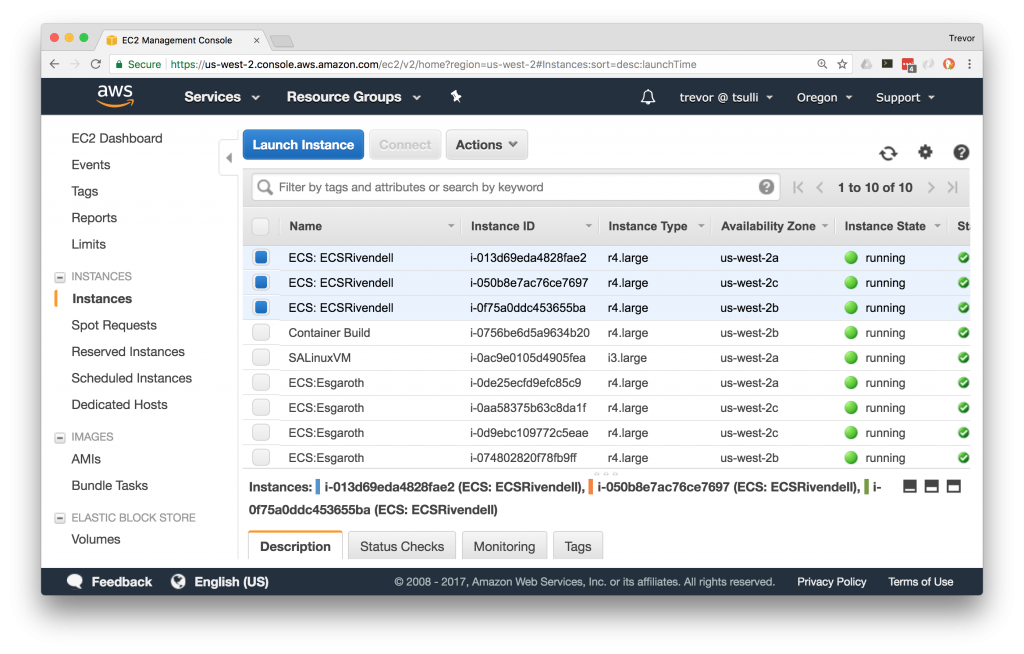 You can also visit the ECS area of the AWS Management Console, and examine the number of container instances that are registered with the ECS cluster. You now have a functioning ECS cluster! 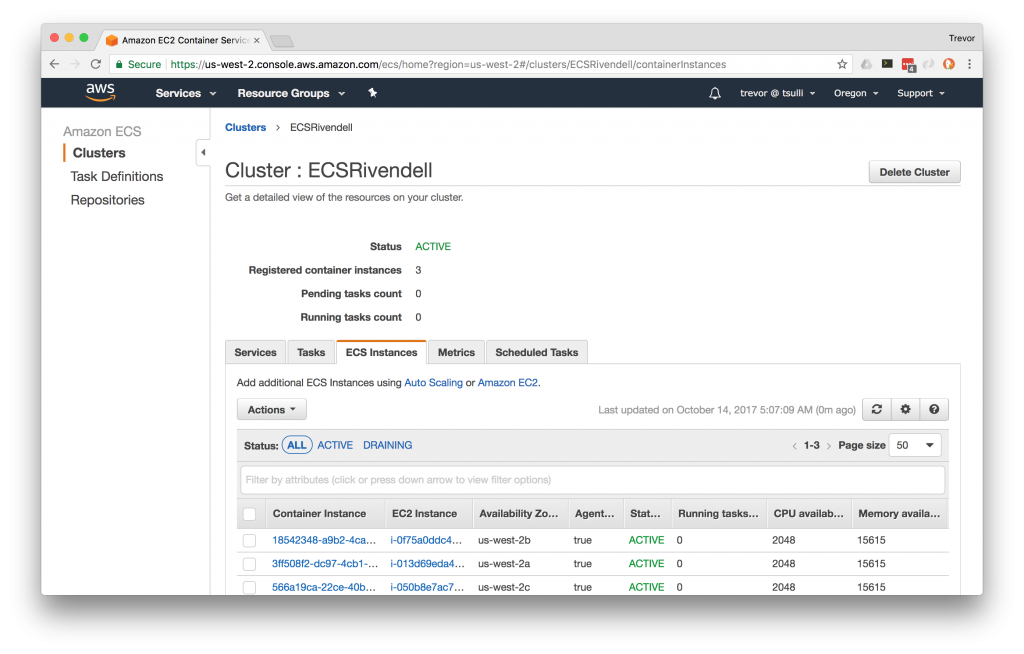 You can even use the Get-ECSClusterDetail command in PowerShell to examine the current count of container instances.

In this article, you set up an EC2 Container Service (ECS) cluster with several EC2 instances running Windows Server registered to it. Prior to that, you also set up the IAM policy, IAM role, and instance profile that are necessary prerequisites to ensure that the ECS cluster operates correctly. You used the AWS Tools for PowerShell to accomplish this automation, and learned about key ECS and EC2 Auto Scaling commands.

Although you have a functional ECS Cluster at this point, you haven’t yet deployed any containers (ECS tasks) to it. Keep an eye out for part 2 of this blog post, where you’ll explore building your own custom container images, pushing those container images up to Amazon EC2 Container Registry (Amazon ECR), and running ECS tasks and services.