This post discusses the resource leak detector for Java in Amazon CodeGuru Reviewer. CodeGuru Reviewer automatically analyzes pull requests (created in supported repositories such as AWS CodeCommit, GitHub, GitHub Enterprise, and Bitbucket) and generates recommendations for improving code quality. This blog does not describe the resource leak detector for Python programs that is now available in preview.

What are resource leaks?

Resources are objects with a limited availability within a computing system. These typically include objects managed by the operating system, such as file handles, database connections, and network sockets. Because the number of such resources in a system is limited, they must be released by an application as soon as they are used. Otherwise, you will run out of resources and you won’t be able to allocate new ones. The paradigm of acquiring a resource and releasing it is also followed by other categories of objects such as metric wrappers and timers.

Resource leaks are bugs that arise when a program doesn’t release the resources it has acquired. Resource leaks can lead to resource exhaustion. In the worst case, they can cause the system to slow down or even crash.

Starting with Java 7, most classes holding resources implement the java.lang.AutoCloseable interface and provide a close() method to release them. However, a close() call in source code doesn’t guarantee that the resource is released along all program execution paths. For example, in the following sample code, resource r is acquired by calling its constructor and is closed along the path corresponding to the if branch, shown using green arrows. To ensure that the acquired resource doesn’t leak, you must also close r along the path corresponding to the else branch (the path shown using red arrows). 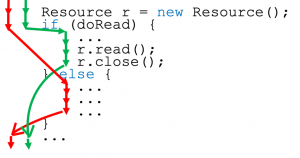 Often, resource leaks manifest themselves along code paths that aren’t frequently run, or under a heavy system load, or after the system has been running for a long time. As a result, such leaks are latent and can remain dormant in source code for long periods of time before manifesting themselves in production environments. This is the primary reason why resource leak bugs are difficult to detect or replicate during testing, and why automatically detecting these bugs during pull requests and code scans is important.

For this post, we consider the following Java code snippet. In this code, method getConnection() attempts to create a connection in the connection pool associated with a data source. Typically, a connection pool limits the maximum number of connections that can remain open at any given time. As a result, you must close connections after their use so as to not exhaust this limit.

However, method validateConnection() at line 7 can throw a ValidateConnectionException. If this exception is thrown after a connection is established at line 5, the connection is neither closed in this method nor is it returned upstream to the client to be closed later. Furthermore, if this exceptional code path runs frequently, for instance, if the validation logic throws on a specific recurring service request, each new request causes a connection to leak in the connection pool. Eventually, the client can’t acquire new connections to the data source, impacting the availability of the service.

A typical recommendation to prevent resource leak bugs is to declare the resource objects in a try-with-resources statement block. However, we can’t use try-with-resources to fix the preceding method because this method is required to return an open connection for use in the upstream client. The CodeGuru Reviewer recommendation for the preceding code snippet is as follows:

As mentioned in the Reviewer recommendation, to prevent this resource leak, you must close the established connection when method validateConnection() throws an exception. This can be achieved by inserting the validation logic (lines 7–14) in a try block. In the finally block associated with this try, the connection must be closed by calling DbUtils.closeQuietly(connection) if connectionAcquired == false. The method getConnection() after this fix has been applied is as follows:

As shown in this example, resource leaks in production services can be very disruptive. Furthermore, leaks that manifest along exceptional or less frequently run code paths can be hard to detect or replicate during testing and can remain dormant in the code for long periods of time before manifesting themselves in production environments. With the resource leak detector, you can detect such leaks on objects belonging to a large number of popular Java types such as file streams, database connections, network sockets, timers and metrics, etc.

To understand the use of the ML model, consider again the code above for method getConnection() that had a resource leak. In the code snippet, a connection to the data source is established by calling BasicDataSource.getConnection() method, declared in the Apache Commons library. As mentioned earlier, we don’t require the source code of external dependencies like the Apache library for code analysis during pull requests. Without access to the code of external dependencies, a pure static analysis-driven technique doesn’t know whether the Connection object obtained at line 5 will leak, if not closed. Similarly, it doesn’t know that DbUtils.closeQuietly() is a library function that closes the connection argument passed to it at line 9. Our detector combines static code analysis with ML that learns patterns over such external function calls from a large number of available code repositories. As a result, our resource leak detector knows that the connection doesn’t leak along the following code path:

This suppresses the possible false warning. At the same time, the detector knows that there is a resource leak when the connection is established at line 5, and validateConnection() throws an exception at line 7 that isn’t caught.

When we run CodeGuru Reviewer on this code snippet, it surfaces only the second leak scenario and makes an appropriate recommendation to fix this bug.

The ML model used in the resource leak detector has been trained on a large number of internal Amazon and GitHub code repositories.

Responses to the resource leak findings

Although closing an open resource in code isn’t difficult, doing so properly along all program paths is important to prevent resource leaks. This can easily be overlooked, especially along exceptional or less frequently run paths. As a result, the resource leak detector in CodeGuru Reviewer has observed a relatively high frequency, and has alerted developers within Amazon to thousands of resource leaks before they hit production.

Resource leak bugs are difficult to detect or replicate during testing. They can impact the availability of production services. As a result, it’s important to automatically detect these bugs early on in the software development workflow, such as during pull requests or code scans. The resource leak detector in CodeGuru Reviewer combines static code analysis algorithms with ML to surface only the high confidence leaks. It has a high developer acceptance rate and has alerted developers within Amazon to thousands of leaks before those leaks hit production.