3 Keys to Innovation in Insurance

There’s a path to digital transformation for companies in every industry, including those that have strong traditions and are highly risk-averse. In this blog post, John Lucking, AWS Principal Solutions Architect, looks at the insurance industry. 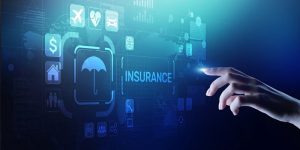 In risk-averse industries like insurance, customers frequently ask what other customers like them focus on when adopting the cloud. Many companies struggle to automate the first notice of loss process, provide customers with multiple digital customer service channels, migrate core insurance systems to the cloud, build a cloud data analytics platform, or utilize machine learning for improved underwriting. I’ve led cloud innovation journeys as CIO and CTO at various insurance companies and have had well over 250 discussions with insurers during my two years at Amazon Web Services. I’ve seen what works and what doesn’t. Today, I’ll dive into the three key areas that innovative insurers consistently focus on: people, processes, and data.

Before starting a new project, you have to consider the team that will work on it. According to the US Bureau of Labor Statistics, employees in the insurance industry have the highest median age in the finance and insurance sector. The average age of employees in insurance IT departments is even higher because of the number of legacy systems that insurers still maintain. Therefore, it is of paramount importance to plan how to assist your people with the tsunami called change that is about to hit them as you start your cloud journey. Fear is a common reaction to change, and some people hold onto fear for one second while others hold onto it indefinitely. To deal with this fear, leaders must communicate and offer different educational opportunities for the new skills required to use new technology. Experienced employees need to receive time and patience to experiment and learn the cloud. I often found that key insights were provided by former legacy programmers and infrastructure engineers who were able to adopt cloud-based technologies.

The last insurance company I worked with started its cloud adoption journey by selecting three members from our 200-person IT organization who were known to be lifelong learners who frequently experimented with tech. After a period of learning and experimentation, we partnered with Underwriting and Actuarial teams to roll out a new quote, bind, and issue portal commercial trucking insurance. We formed a two-pizza, cross-functional team with a mix of new hires, interns, and experienced members from groups across the business (such as Underwriting, Actuarial, Security, Regulatory Compliance, Finance, and Legal). Team members who were not dedicated full time to the cross-functional team made themselves available for scheduled check-ins and were very responsive via instant messaging. Within three months, we successfully launched our product. And we continued to roll out new features every few days, and ultimately converted the architecture to heavily utilize serverless solutions.

The people involved rapidly built the skills and the confidence needed to navigate the new technology and setup, and news of their success spread throughout the company. People began to realize that forming cross-functional autonomous teams, using modern tools, experimenting, and working closely with all roles within the business help everyone overcome their fear of change. They then became energized and focused on delivering tangible results that, thanks to accessible, clean data, were easily measured against the goals of the business.

The best processes always have three key traits: simplicity, transparency, and automation. The process should be easy to understand and use, it should be easy to monitor and troubleshoot, and it should be as automated as possible. One key scaling process we used was modeled after mitosis, a type of cell division in which one cell divides to produce two new cells that are genetically identical to itself. The most experienced member of the initial cross-functional team left to form a new team. After the new team had gelled, we repeated the process. Pair programming was utilized daily, and the business users were frequently shown ideas in development. A natural two-way dialogue developed to ensure that the solutions met the immediate needs of the day.

To modernize our business processes, we first focused on the policy life cycle. We identified opportunities for innovation in the creation, versioning, and distribution of policy forms. The builders first understood the logic of the process: collect data, select the correct form template, merge the data and template together, distribute the forms, and track to whom and when forms were distributed. The long history of an insurance company usually leads to a large collection of policy forms that are not well organized. Therefore, the key success factor was to work closely with underwriters to rewrite the existing forms so that they could be organized into templates. We then rapidly experimented with some cloud-based solutions as well as with a core insurance policy system’s form capabilities. Based on the results of the experiment, we chose a cloud-based solution that let us build a process that had the right levels of simplicity, transparency, and automation.

A typical insurance company is burdened with a legacy that includes multiple policy, billing, and claims systems. The submissions, policy, billing, claims, and financial closing processes all struggle to find a single source of the truth. Friction between the IT department and the rest of the business exists because IT has limited time to respond to business requests due to the difficulty of running all of the legacy systems. Starting fresh and utilizing innovation by forming new cross-functional teams and defining new processes as described earlier is the best way to create, capture, analyze, and govern your data.

As new data pipelines are created, you can compare the new data to the existing data. At this stage, you’ll probably find discrepancies that indicate the existing data is incorrect. New data pipelines should have the three aforementioned traits: simplicity, transparency, and automation. Data is the key to measuring progress and identifying signals that define your future strategy; working with existing data that cannot be trusted is counterproductive. As our new cloud-based quote, bind, and issue portal started to bring in business and result in a few claims, we could easily track the combined ratio on the book of business and drill down into the details, which allowed us to make informed changes to our coverages, knock out questions, and rating formulas.

Bringing It All Together: The Flywheel

In his best-selling book Good to Great, Jim Collins discussed the flywheel effect:

The good-to-great companies understood a simple truth: tremendous power exists in the fact of continued improvement and the delivery of results. Point to tangible accomplishments—however incremental at first—and show how these steps fit into the context of an overall concept that will work. When you do this in such a way that people see and feel the buildup of momentum, they will line up with enthusiasm.

Innovative insurance companies have skilled, motivated, and enthusiastic people that help define, utilize, and improve processes that capture data. This data can be turned into insights that lead to clear, measurable actions that drive the creation and cycle of innovative insurance products. People, processes, and data are the drivers of innovation.

For example, consider teenagers. It is well known that many teenagers are glued to their phones and are concerned about their online social profiles. They are often motivated by gamification (the process of adding games or gamelike elements to something so as to encourage participation). Building a personal auto insurance product for teenage drivers would require that people on the project know the average teenager’s mindset, then utilize development processes to build and deploy an appropriate IoT device or mobile application and capture and process the data. Then the data can be analyzed and used to further enhance the insurance product. Perhaps safe driving can be rewarded by offering free Chick-fil-A sandwiches (a favorite among teens). Simple ideas like these can be easily implemented and measured with the right people, processes, and data, and thus the innovation flywheel will continue to spin and pick up speed. 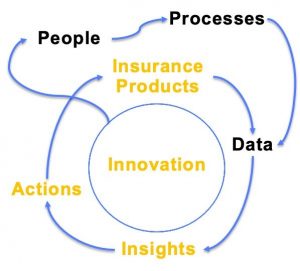 Get Going and DO SOMETHING

When my amazing 94-year-old mom needs help, she says, “John, DO SOMETHING.” It’s her way of asking for help and it encourages me to act. All you need to do to start something new is take a single step. In the words of Jim Collins, “[A transition from] good to great comes about by a cumulative process—step by step, action by action, decision by decision, turn by turn of the flywheel—that adds up to sustained and spectacular results.”

John Lucking is a Principal Solutions Architect supporting our Insurance customers. His deep background in the industry includes roles as CTO of a P&C insurer, CIO of a run-off insurance company, and VP of IT at a reinsurance company. This background has helped him build and lead great teams that design innovative and impactful technical solutions. John received a BA International Language and Business with an area of specialization in Computer Science from the University of Scranton.