The Danish Meteorological Institute (DMI) is responsible for running atmospheric, climate and ocean models covering the kingdom of Denmark. We worked together with the DMI to port and run a full numerical weather prediction (NWP) cycling dataflow with the Harmonie Numerical Weather Prediction (NWP) model to AWS. You can find a report of the porting and operational experience in the ACCORD community newsletter.

We have recently published a report in the ACCORD newsletter which provides a description on the porting experience and execution of a full NWP cycling dataflow with the Harmonie model to AWS. The report also talks about the increasing relevance of Cloud computing for operational NWP and the numerous use-cases of cloud computing in the fields of weather forecasting and climate research.

For our evaluation we used a production size workload with a Grid size of 1920x1620x90 at 2km resolution. This workload is currently being developed as a joint effort towards a common setup for Numerical Weather Prediction for the United Weather Centre West. A typical production forecast length is 48H with hourly output. The target time for forecasting is 40min with additional post-processing required for an hourly run cycle. For the purposes of this evaluation, we reduced the forecast length to 1H. The success metric was to provide a 1 hour forecast in 50 seconds.

As NWP models benefit from high-speed networking, we evaluated the Harmonie model performance on C5n.18xlarge instances with EFA on AWS and compared it to two Cray machines, Cray XC40 and Cray XC50 both with Cray Aries interconnect. 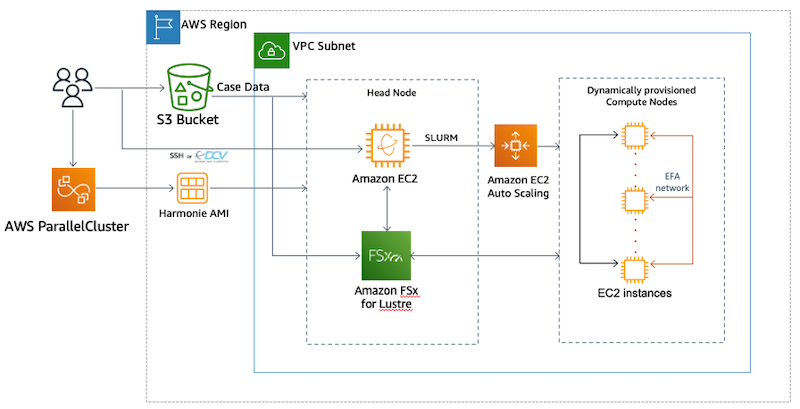 Figure 1: The AWS Architecture for Harmonie

As shown in Figure 1, we used AWS ParallelCluster to launch the cluster of Amazon EC2 instances. This is an AWS-supported open-source cluster management tool that makes it easy to deploy and manage HPC clusters on AWS. With AWS ParallelCluster, the user just needs to create a simple text configuration file to model the resources of the cluster which is used to provision compute, storage and networking capabilities in an automated manner.

For running Harmonie on AWS, we launched a cluster using a custom Amazon Machine Image (AMI) configured with all the necessary components to launch and run Harmonie. The compute, storage and networking requirements are defined in the ParallelCluster configuration file. For compute we used c5n.18xlarge instance type with EFA enabled. For storage we enabled Amazon FSx for Lustre for parallel I/O and an Amazon S3 bucket to store the Harmonie input data. We also enabled the Slurm scheduler to be used for job submission. With that configuration the system experience is not far from what users are used to on on-premises systems.

The goal of our evaluation was to understand the feasibility and performance of running a production class Numerical Weather Prediction (NWP) model as-is on AWS and as such we have not focused on detailed optimizations across the different systems.

Hybrid MPI x OpenMP: The model was run with MPI-only on all three systems with 1 MPI rank per core. The Harmonie code supports hybrid MPI and OpenMP parallelization, we will focus on evaluating the right balance of MPI ranks to OpenMP threads as an optimization exercise in the future.

I/O Performance: Harmonie is very sensitive to I/O performance. The code has an option to enable a separate I/O server and allocate MPI tasks which explicitly do I/O. We have enabled the I/O server option on all the systems evaluated. Based on experiments we allocate 4 dedicated MPI tasks for I/O as that was optimal across all the systems. Further for improved I/O performance on AWS, we have used AWS FSx for Lustre which is a fully managed high performance Lustre file-system service. The Lustre file-systems on CrayXC40 and CrayXC50 are both running on Sonexion storage systems.

The whole production suite has been built on AWS and the main HPC components (Forecast and Data assimilation (4dvar)) have been scientifically tested and benchmarked in the sense that we have collected the initial as-is runtimes attainable without any efforts on tuning on any of the three systems. This initial benchmarking has demonstrated AWS performance that is on-par with on-premises platforms.

The binaries and their third-party library dependencies have been wrapped in a self-contained Harmonie AMI (Amazon Machine Image) and a corresponding AWS ParallelCluster configuration. 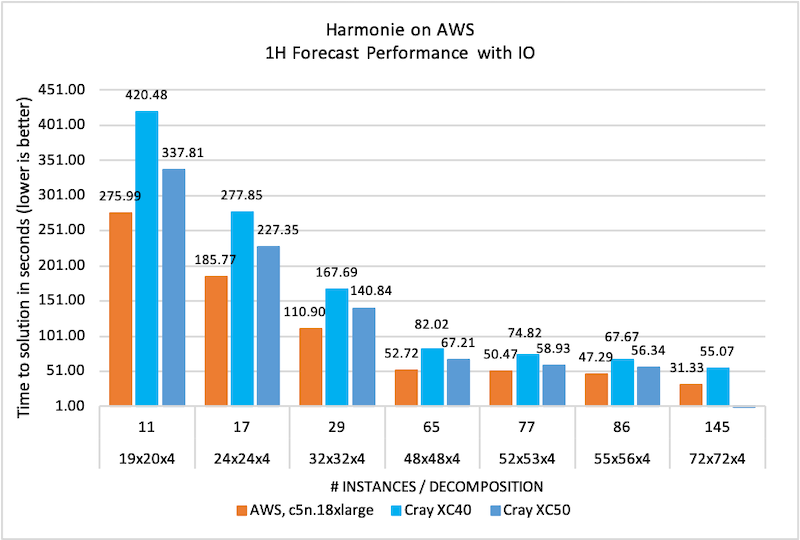 Figure 2 shows the performance of the 1H operational Forecast using the Harmonie model across AWS, Cray XC40 and Cray XC50. The X-axis shows the number of instances (nodes) and corresponding decomposition used for each run; the Y-axis is the Time to solution thus lower is better. Comparing across the systems AWS c5n.18xlarge (Intel Skylake based) has a 43% performance advantage over the Cray XC40 (Intel Broadwell based) at 145 instances (nodes) and is 16% better over Cray XC50 (Intel Skylake based) at 86 instances (nodes). There were not enough free nodes in the Cray XC50 machine to scale to more than 86 nodes at the time of this evaluation. Since all the systems evaluated have hosts with 36 physical cores per node, it is easier to compare performance on a per node basis.

In this blog, we have demonstrated the performance of running a large-scale production class tightly-coupled NWP simulation using Harmonie on Amazon EC2 instances. There is up to a 43% performance advantage running the NWP forecast simulations on C5n instances compared to Cray XC40 and up to 16% better compared to Cray XC50. The high network bandwidth provided by EFA helps to run the Harmonie model at scale and achieve 37% faster turn-around time than the set target for 1H forecast.

We encourage you to test your NWP model on Amazon EC2 instances. Detailed instructions on obtaining the Harmonie AMI and deployment on AWS using AWS ParallelCluster are provided in the GitHub repository HarmonieAWS. Reach out to us if you have any questions!

Jacob is a Sr. HPC Performance specialist at DMI with more than 20 years of experiences in scientific computing focusing on performance analysis and optimizations of applications within the fields of Weather, Ocean and Climate model.