Processing large amounts of complex data often requires leveraging a mix of different Amazon Elastic Compute Cloud (Amazon EC2) instance types. This is because some parts of a workflow benefit from a higher number of CPUs, and other parts benefit from a higher amount of memory. These types of computations also benefit from shared, high performance, scalable storage like Amazon FSx for Lustre. Right-sizing your compute fleet and storage to the computation needs is a way to control costs. Another way to save costs is to use Amazon EC2 Spot Instances, which can help to reduce EC2 costs up to 90% compared to On-Demand Instance pricing.

This post will guide you in the creation of a fault tolerance cluster allowing the automatic re-queue of the jobs in case of a Spot interruption. In addition, Spot Instances can decrease the cost of your jobs by up to 90% over On-Demand Instances. We will explain how to configure AWS ParallelCluster to run a Slurm cluster that is able to manage Spot Instance interruptions, automatically unmount the Amazon FSx for Lustre filesystem, and re-submit the interrupted jobs back into the queue so they run on new nodes of the cluster.

A Spot Instance is an instance that uses spare EC2 capacity that is available for less than the On-Demand Instance price. The hourly price for a Spot Instance is called a Spot price. The Spot price of each instance type in each Availability Zone is set by Amazon EC2, and is adjusted gradually based on long-term supply and demand. Additionally, Amazon EC2 can interrupt your instance when Amazon EC2 needs to fulfil demand for non-Spot Instance requests. When this event happens, Amazon EC2 provides an interruption notice, which gives the instance a two-minute warning before Amazon EC2 interrupts it.Amazon FSx for Lustre maintains a distributed and coherent state across both client and server instances, and delegates temporary access permissions to clients while they are actively-doing I/O and caching file system data. When a Spot Instance is reclaimed, the FSx for Lustre servers wait for the client’s reply for few minutes before evicting them. As the number of Spot Instances are reclaimed and shut down, the performance of the other-running FSx for Lustre clients can suffer.

To avoid the situation where a FSx for Lustre server is waiting multiple minutes for the terminated clients to reply to the server request, you can unmount the FSx for Lustre client before the Spot Instance shuts down. The documentation for FSx for Lustre covers how to work with Amazon EC2 Spot Instances and provides an example bash script.

With an HPC cluster running multiple instances, the unmount procedure must be managed at scale. Once a Spot Instance is reclaimed by Amazon EC2, the scheduler must shut down the whole job impacted and then your job must be re-submitted.

This functionality allows specific categories of jobs to be interrupted and resumed anytime. Some examples are Monte Carlo simulations, and checkpoint-able applications. Monte Carlo simulations are a type of computational algorithms that predicts a set of outcomes based on repeated random sampling. This class of algorithm can be restarted anytime without specific requirements. Checkpoint-able applications are another type of jobs that can save the status of the simulation and restart from the saved state.

Description of the solution 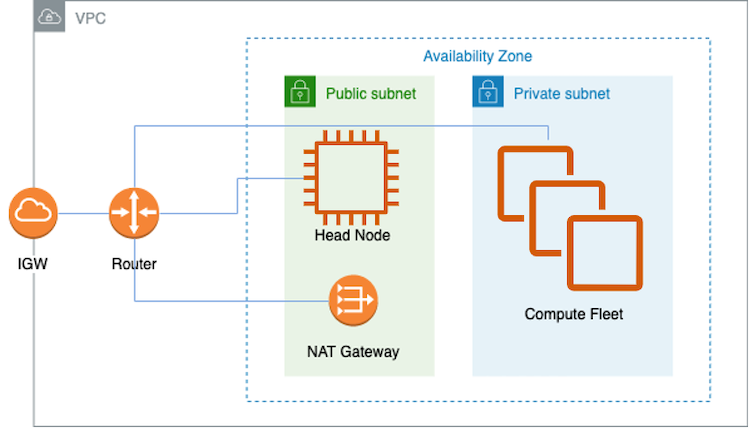 As the deployment of the solution requires some additional configuration, the next paragraph explains how to download the provided custom files in your local environment.

The wizard will ask you some questions to create the network stack, based on your choices.
In addition, the preceding AWS ParallelCluster command will create the cluster-config.yaml file, that will be used to create the cluster in the next step. This generated file must be updated with a few changes according to the requirements of the solution.

Customize the AWS ParallelCluster configuration file
Make a backup copy of this generated file, and replace it with the provided cluster-config.yaml file, on which you have to change the placeholders accordingly based on the copied file:

The following section will explain the relevant changes of cluster configuration file:

To specify the default AWS Region for your cluster, export the following environment variable in your terminal:

We can now create the cluster by running the following pcluster create-cluster command:

The cluster creation will create the resources specified in the configuration file.
You can monitor the creation of the cluster with the pcluster list-clusters command:

Connect to the head node

Once the cluster is at CREATE_COMPLETE state, you can connect to the head node following the steps below:

When you are connected to the terminal on the head node cluster, you can proceed to the creation of your job script file, using a template like the one below:

The trap line is used to intercept the TERM signal sent by the spot-daemon.sh script when the Spot Instance interruption action is detected. The 200 exit code is used to catch the Spot interruption condition, instead of any other exit code deriving from the application.

You can now submit the job to the scheduler:

A quick note about connecting to the instance: In the previous instructions we used the default method for ParallelCluster to connect to the head node, namely SSH. Alternatively, you could connect to the cluster Head Node using AWS Systems Manager Session Manager, which has a few management and security benefits over SSH.

When a Spot Instance is reclaimed by Amazon EC2, the following actions are performed:

You can trigger the interruption of an Amazon EC2 Spot Instance using AWS Fault Injection Simulator (FIS). With a few clicks in the console, you can set up an experiment that triggers interruptions on your Spot Instances.

To use AWS FIS, you must create an IAM role that grants AWS FIS the permissions required so that AWS FIS can run experiments on your behalf.

The IAM role must have a trust relationship that allows the AWS FIS service to assume the role.

Create and start a AWS FIS experiment in the console

To create an experiment template using the console

After you have created an experiment template, you can start experiments.

To start an experiment using the console:

After the experiment has been shut down, the compute instance will be shut down and the job re-queued.

When you have finished your computation, the cluster can be shut down using the pcluster delete-cluster command:

In this blog post, we show you how to configure AWS ParallelCluster to handle Spot Instance interruption. We covered how to maintain a consistent and a performant Amazon FSx for Lustre file system. The coherency of read and write operations are enforced through the FSx for Lustre distributed lock manager. If application threads running on multiple nodes were trying to read and write the same part of a file at the same time, they would both see consistent results. The procedure to unmount correctly the Amazon FSx for Lustre file system allows to maintain a distributed and coherent state across both client and server instances.

In addition, we also discussed how to automatically re-submit jobs that were affected when a Spot Instance is reclaimed. If the running job’s application supports check-pointing, you have the possibility to alter the procedure to automatically restart the job from the last-saved checkpoint.

As last point, the described architecture increases the fault tolerance allowing the automatic re-queue of the Jobs and, using Spot instances, the EC2 cost for your Jobs can be up to 90% lower than On-Demand instances.

To learn more, read about how to use AWS ParallelCluster and Amazon FSx for Lustre.