A digital twin is a living digital representation of a physical system that is dynamically updated to mimic the structure, state, and behavior of the physical system to drive business outcomes. Building one is usually not an easy task – to solve this challenge, we launched a new service, AWS IoT TwinMaker. AWS IoT TwinMaker connects data from a variety of sources like equipment sensors, video feeds, and business applications and creates a knowledge graph to model real-world systems and generate real-time insights from the digital twin.

Some customers are using AWS IoT TwinMaker to optimize maintenance schedules by quickly pinpointing and addressing equipment and process anomalies, or to give field workers a consolidated view of all asset and operational data. Another common use case is enhancing the user experience and improving occupant comfort in buildings by monitoring live and historical data about temperature, occupancy or air quality within rooms.

This blog post series addresses this last scenario: monitoring temperature and humidity of a room in real time while being able to control the location and status of sensors.

To simulate this scenario, you will learn how to use AWS IoT TwinMaker to create a digital twin of a Raspberry Pi device connected to a sensor that collects temperature and humidity data. You will integrate with an Amazon Managed Grafana dashboard to visualize the 3D environment where the digital twin lives together with collected data that influences the device status and 3D model representation in real time.

Part 1 (this blog post) covers an overview of the solution, the setup of the time-series database, which will host your data, and the configuration of the IoT Thing. It also covers the wiring of the sensor to the Raspberry Pi device.

In Part 2, you will continue with the setup of the Amazon Managed Grafana dashboard that will be used to visualize data. You will create the AWS Lambda function to read data from the time-series database and most importantly, you will setup AWS IoT TwinMaker and integrate it with the Amazon Managed Grafana dashboard to display your digital twin together with real time data you will collect.

The diagram below shows a high-level architecture overview. Data generated from the sensor attached to the Raspberry Pi device is sent via a Python script to AWS IoT Core, that easily and securely connects devices through the MQTT and HTTPS protocols. From here, using AWS IoT Core rules, data is streamed to an Amazon Timestream database. On the AWS IoT TwinMaker side, you will create the workspace environment where a virtual entity is defined together with its 3D model representation. A component will also be created, which uses a Lambda function to read data from Amazon Timestream, so that your digital twin is in sync with data arriving from the sensor. For the visualization part, you will leverage the AWS IoT TwinMaker Grafana dashboard integration to create a dashboard which presents data together with the 3D model. The dashboard is accessible in SSO via AWS IAM Identity Center (successor to AWS SSO). Finally, you will create AWS IoT TwinMaker rules to be able to easily see changes in the dashboard whenever the temperature or humidity goes below or above the thresholds defined. 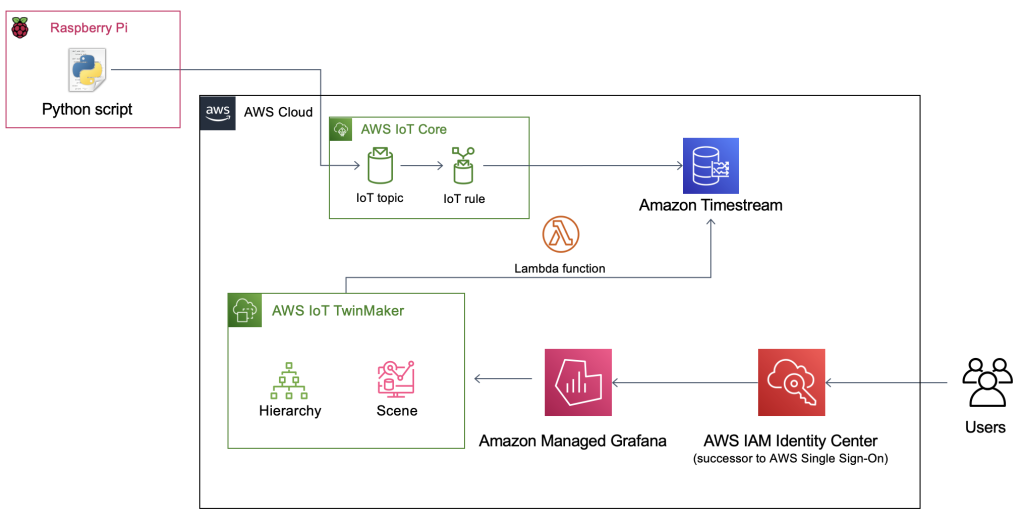 Figure 1: The high-level architecture of the solution

Below are the macro-steps you will perform in this blog post series:

IMPORTANT: Some of the services used are not yet available in all the AWS regions. Make sure you create all your resources in us-east-1 or eu-west-1 (depending if you prefer US or Europe region).

Let’s start by configuring the database for the temperature and humidity data. The use case is clearly related to collecting time-series data, so the right “tool” in this case is Amazon Timestream.

To create a database:

Then, create a table.

The database is ready to receive data.

In this section, you will prepare the “connection” between the Raspberry Pi device and AWS IoT Core by creating a policy and certificates, then registering the device as a “Thing”. Next, you will define the rules to send data to the Amazon Timestream database and route potential errors to logs in Amazon CloudWatch.

You will now create a policy to allow the publication and subscription of a specific IoT topic (/raspberry/temphumid). This policy will be attached to a certificate used by the AWS IoT thing.

Create an AWS IoT Thing and generate a certificate

Figure 3: An IoT thing has been created to represent your Raspberry Pi 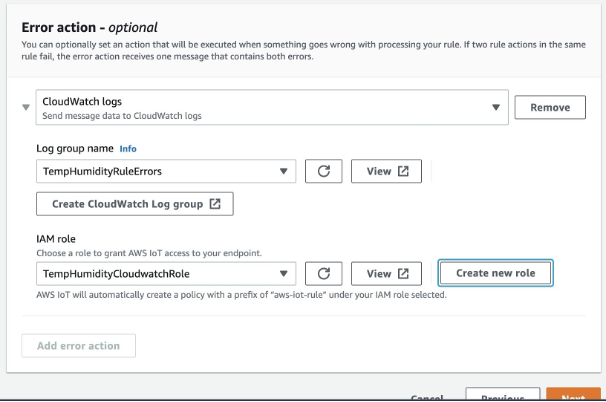 You now have a valid IoT rule that will route temperature and humidity data sent by the sensor to the Timestream database. Errors will be sent to Amazon CloudWatch logs.

Now that you have defined the database and prepared the AWS IoT thing that represents your Raspberry Pi, it’s time to wire the sensor to the Raspberry Pi and then send some data to AWS IoT Core.

Note: This blog was created using a Raspberry Pi 4 Model B mounted on a case box kit. This box kit neatly packages the Pi and prevents damage, but is not required. The same is true for the expansion board, which makes it easier to work on the breadboard rather than using the Raspberry Pi pins directly. You don’t need it if you want to connect wires directly to your device.

The DHT11 sensor is connected to the breadboard as shown in the pictures following. 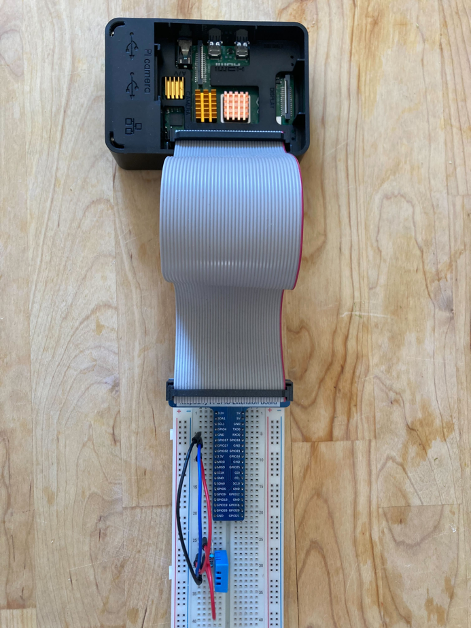 Figure 7: Raspberry Pi with extension board and DHT11 sensor wired

Now that you have the sensor correctly wired to your Raspberry Pi device, you will try to send some temperature and humidity data to AWS. First, you need to copy the Raspberry Pi certificates that you downloaded when you configured the AWS IoT thing, so that Raspberry Pi knows where to connect and send the generated data. There are several options to connect with Raspberry Pi and copy over files. You could use SFTP and save the certificates in a Raspberry Pi safe folder, where you can reference them in the code later.

Once you have the certificates in place, you can move to the next step. You will create a Python file in the Raspberry Pi that will include the Python code below to collect data from the DHT11 sensor. This script will collect data and send it to AWS.

On your Raspberry Pi device, create a file named temphumid.py and paste the Python code below

Let’s examine the code above:

As you probably noticed, the code needs to be adjusted to include your unique clientID (you can choose a unique string) and most importantly, your IoT endpoint. To find it, in the console, select AWS IoT Core and then navigate to Settings > Device data endpoint. Copy the endpoint URL you see in the page and paste it in the Python script.

Once you followed the steps above in the temphumid.py file, do not forget to save it, then run it. If everything is set up correctly, you will see a message like the following: 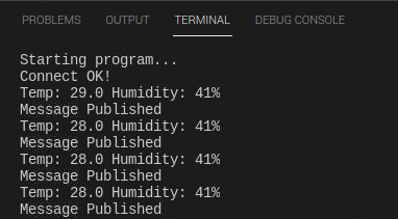 To make sure that data sent to AWS IoT Core is correctly routed to the Amazon Timestream database, open Amazon Timestream in the console and check that the table TempHumidity contains data. You can navigate to the query editor in Amazon Timestream to have a preview of your data by choosing the three dots close to your table name and choose Preview Data – by default, it will retrieve the last 15 minutes of data. 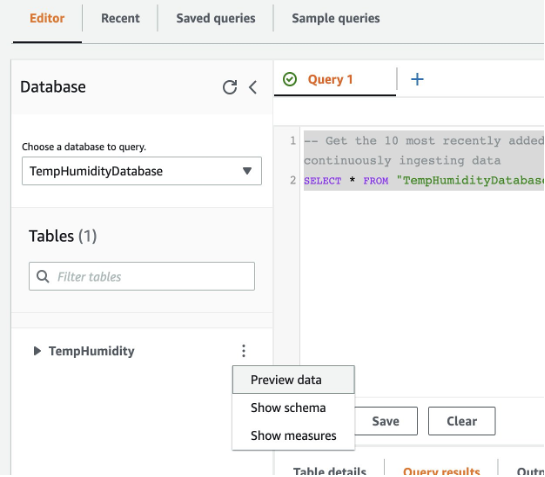 If data is not there, refer to the error logs you have in the CloudWatch log group you created before.

For now, you can stop the Python script. You will run it again later.

In part 1 of this series, you have laid the foundations for the creation of a digital twin of your device. You have completed the setup of the Amazon Timestream database and you have created the AWS IoT Thing with certificates and rules to make sure that temperature and humidity data collected by your device is sent to the database. You also have configured your Raspberry device by wiring the sensor and using a Python script to send data to AWS.

In part 2, you will continue with the setup of the Amazon Managed Grafana dashboard that will be used to visualize data. You will create the AWS Lambda function to read data from Timestream database and most importantly you will setup AWS IoT TwinMaker and integrate it with the Amazon Managed Grafana dashboard to display your digital twin 3D Model together with real time data you will collect.