This is the second blog in a two-part series. In the first blog, I explained the importance of testing IoT devices and how AWS IoT Core Device Advisor works. In this blog, I share my experience using Device Advisor to debug a software application on an IoT device with a real-world industrial condition monitoring example.

The solution highlighted in this blog post covers the following AWS Partner solutions and AWS services:

Each PLC is generating data about the state of the water pumps and communicating over Modbus TCP, a standard communication protocol used by PLCs, to an IoT gateway. Everyware Software Framework is running on the gateway device. An ESF Wires application is configured to collect data over the Modbus TCP protocol and the data is published to AWS IoT Core using the AWS IoT Core Connector for ESF.

Once the data arrives on AWS IoT Core, an IoT Rule is triggered for each message and moves data into Amazon Timestream. Finally, the data is visualized in Amazon Managed Service for Grafana for operators to see the real-time status of the water pumps. If the IoT device is not reliable while deployed in the field, critical condition monitoring data may not be seen by an operator, leading to pump downtime and possible flooding.

To see the condition and operating status of the water pumps, I open up the Amazon Managed Service for Grafana dashboard. 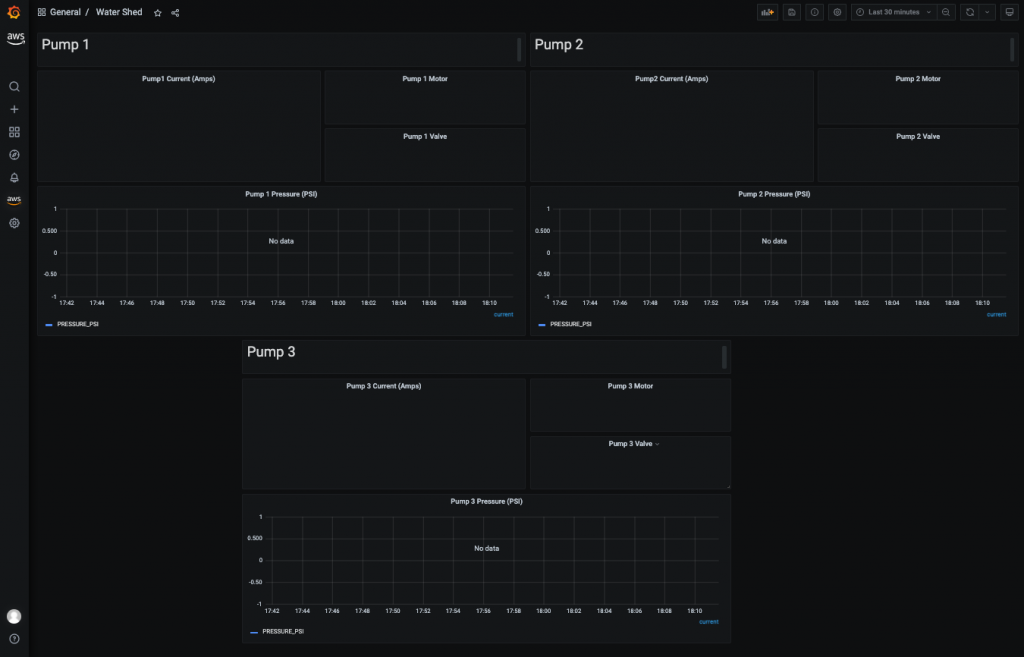 As we see in the screen above, no data is currently appearing on the Grafana dashboard. This can indicate that data is not arriving on AWS IoT Core due to connectivity or reliability issues. AWS IoT Core Device Advisor can help debug such issues. To start debugging, I create a test suite from the AWS IoT Device Advisor console specific for my solution with the following prebuilt test cases: 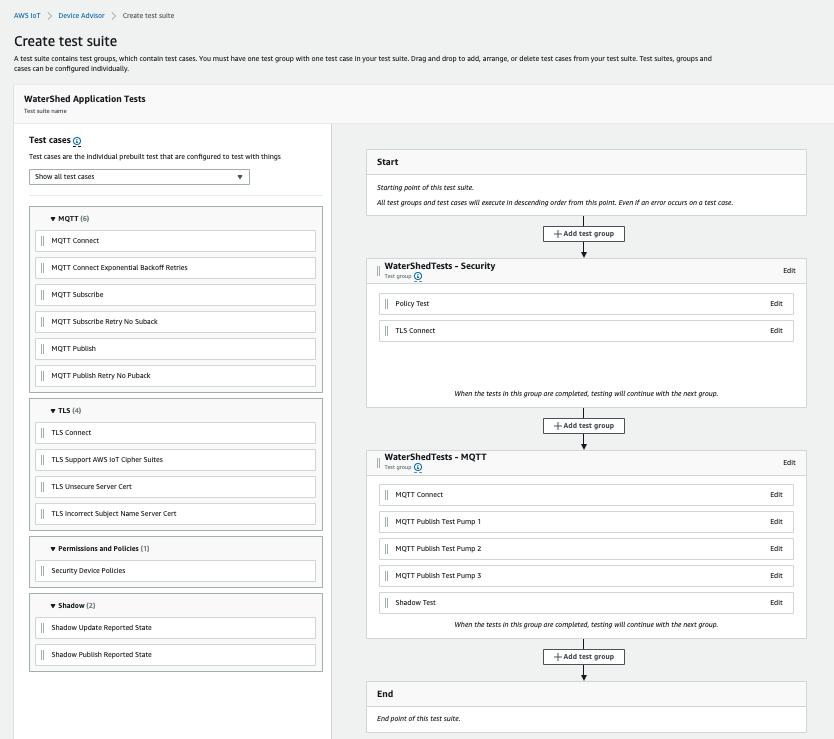 Once the test suite is set up, I configure Everyware Software Framework to connect to the Device Advisor endpoint. 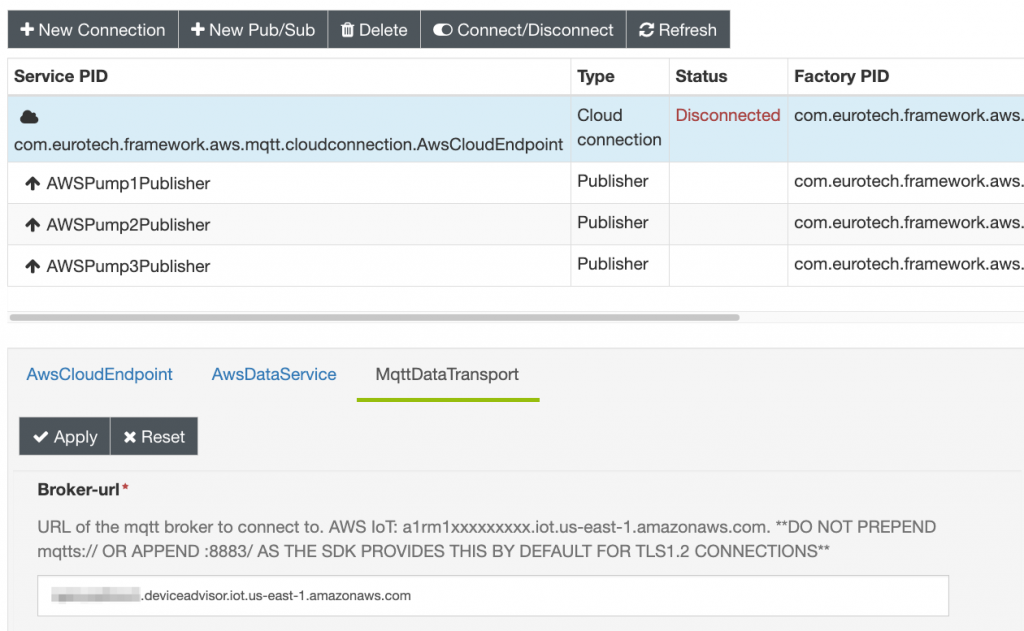 Figure 4: The MQTT broker endpoint is changed to point to the Device Advisor endpoint under the ‘Broker-url’ configuration parameter in ESF.

Once the Test Suite has completed, results are displayed in the Device Advisor console. 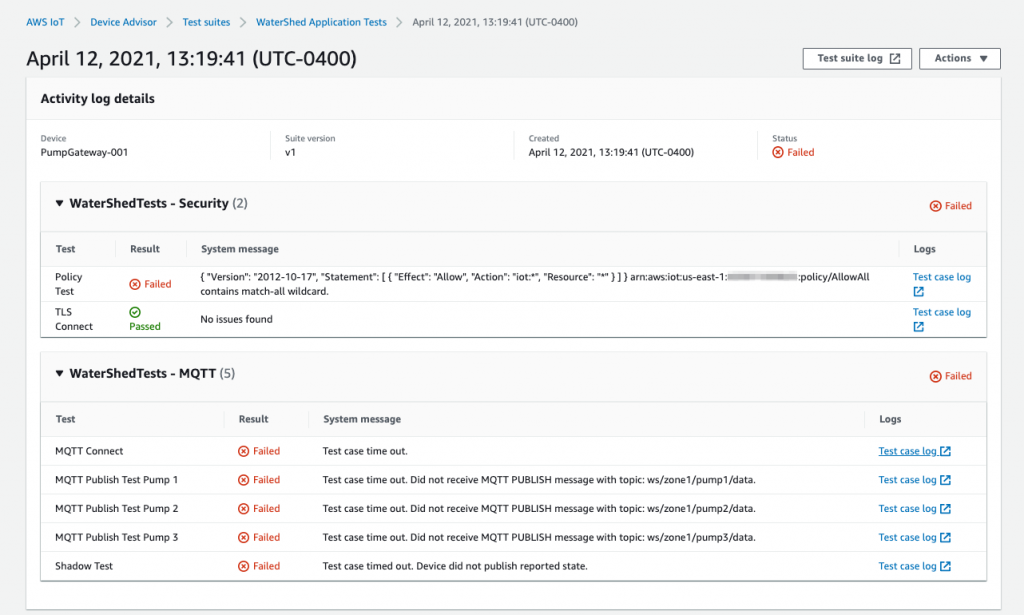 According to the Device Advisor test report, the Policy Test failed due to a policy that contains a wildcard (‘*’). The policy should be changed to ensure that the device is only allowed to connect with its Client ID, publish on specified topics, and update its Device Shadow. I replaced the device’s policy with a more restrictive policy, and attached it to the device certificate. For more information on IoT Policy best practices, see the documentation.

The MQTT_Connect failed, and subsequent tests also failed because they are dependent on the device connecting to Device Advisor using the MQTT protocol.

The System Message for the MQTT_Connect, ‘Test case time out’, indicates that the timeout was reached before the device sent an MQTT CONNECT packet. To investigate with more detailed information, I click on the ‘Test case log’ link to open Amazon CloudWatch Logs. 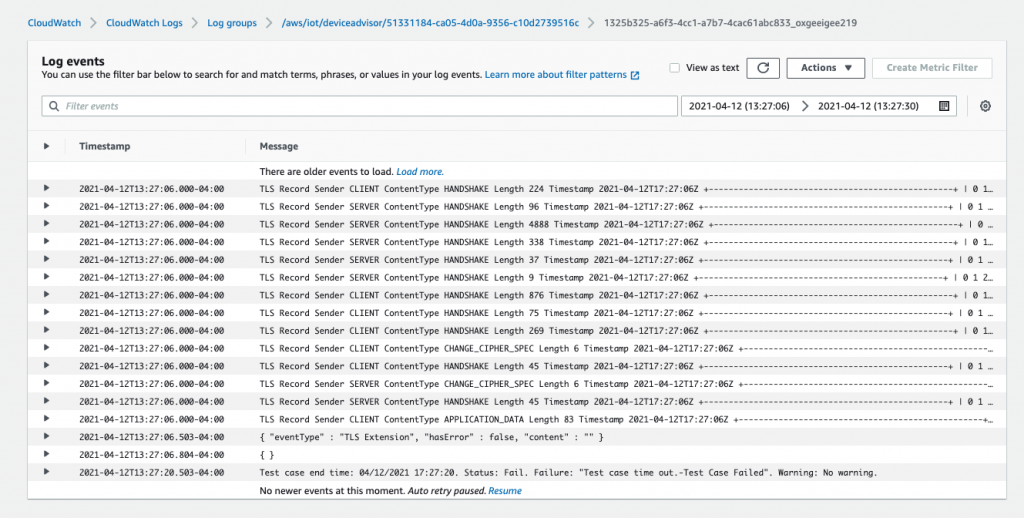 Next, I check the registered certificate on AWS IoT Core to ensure that it is valid and active. 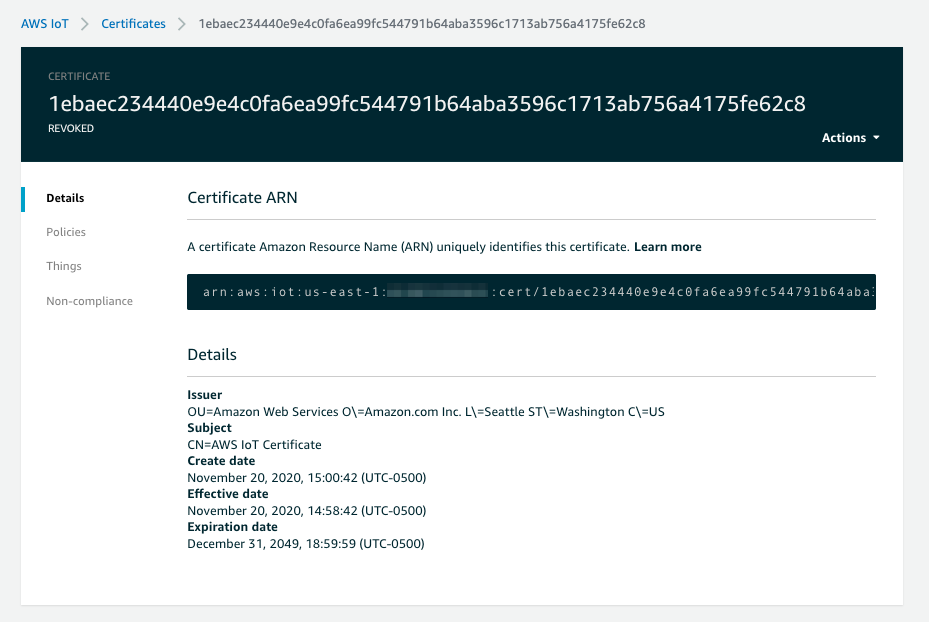 Figure 7: The certificate on AWS IoT has been revoked.

The certificate has been revoked, which causes the MQTT connection to fail. Certificates can be revoked by administrators or from automated mitigation actions configured in AWS IoT Device Defender. A certificate may be revoked to prevent devices utilizing that certificate from connecting to AWS IoT Core due to a security threat or misbehavior. In order to ensure my device remains secure and can connect to AWS IoT Core, I generate a new certificate and rotate the certificate in ESF.

The MQTT Connect test is successful now. The CloudWatch Log for this test case shows 2 events after the TLS handshake, indicating the device under test (DUT) sent a CONNECT packet, and Device Advisor responded with a CONNACK: 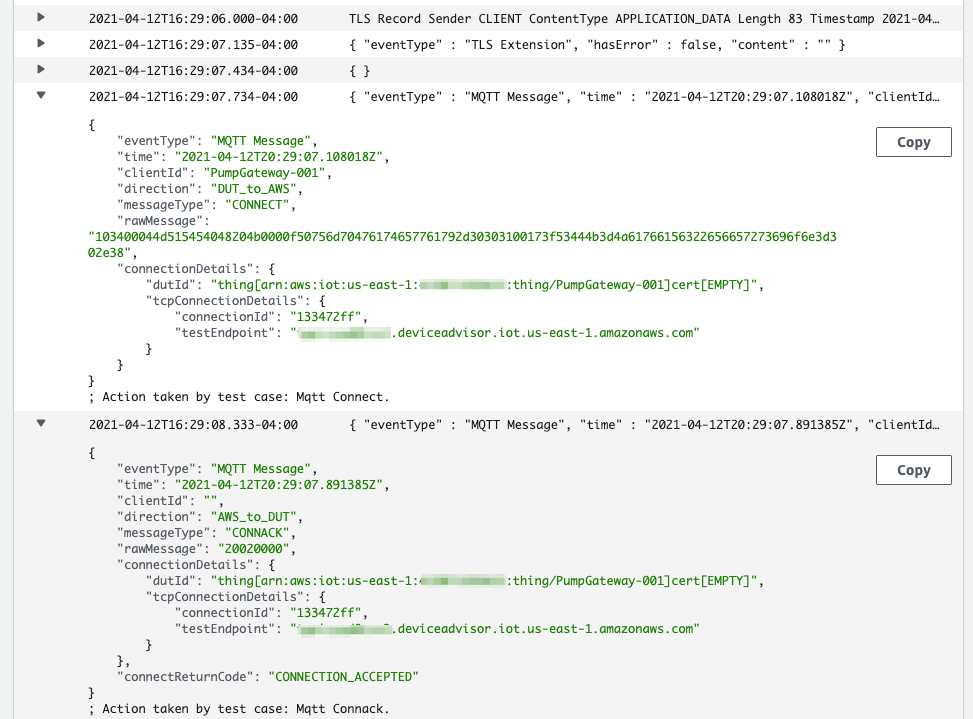 Figure 9: CONNECT and CONNACK messages exchanged with the device and Device Advisor

There are 2 other test case failures related to the configuration of my ESF application. 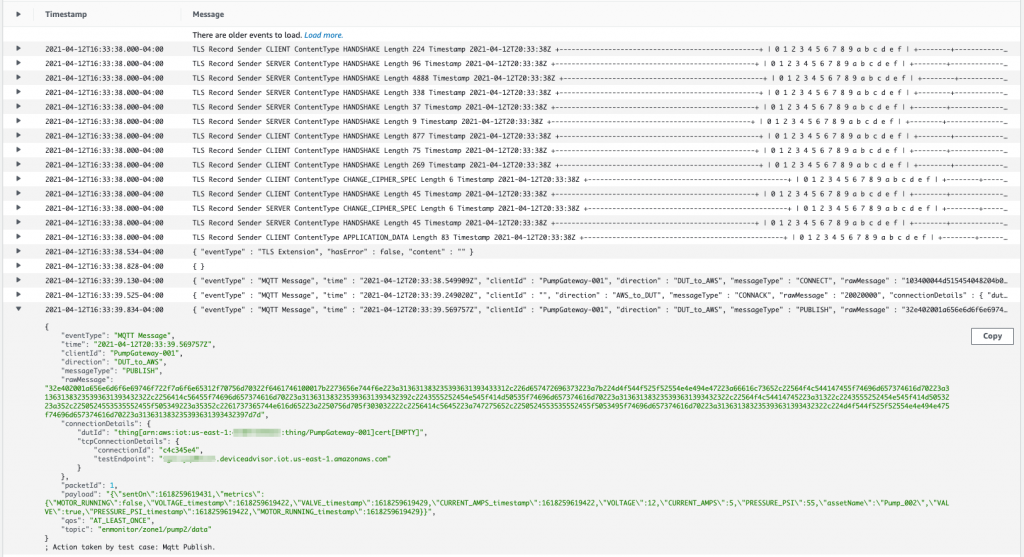 PUBLISH events are recorded that indicate that the device has published to the incorrect topic.

The expected reported state is defined in the Test Suite creation script:

In my application I chose to use a single Classic Shadow for all water pumps to reduce MQTT messaging costs related to updating multiple small Named Shadow documents for each water pump. The context must be kept for each reported motor state by including the pump name in the reported parameter. To change the name of the value, I edit the JavaScript Filter ESF Wire component that is used to extract the motor state and transform the message before publishing to AWS IoT Core Device Shadow service.

After reconfiguring my ESF application, I run the Device Advisor test suite one more time to ensure all failed test cases are now passing. 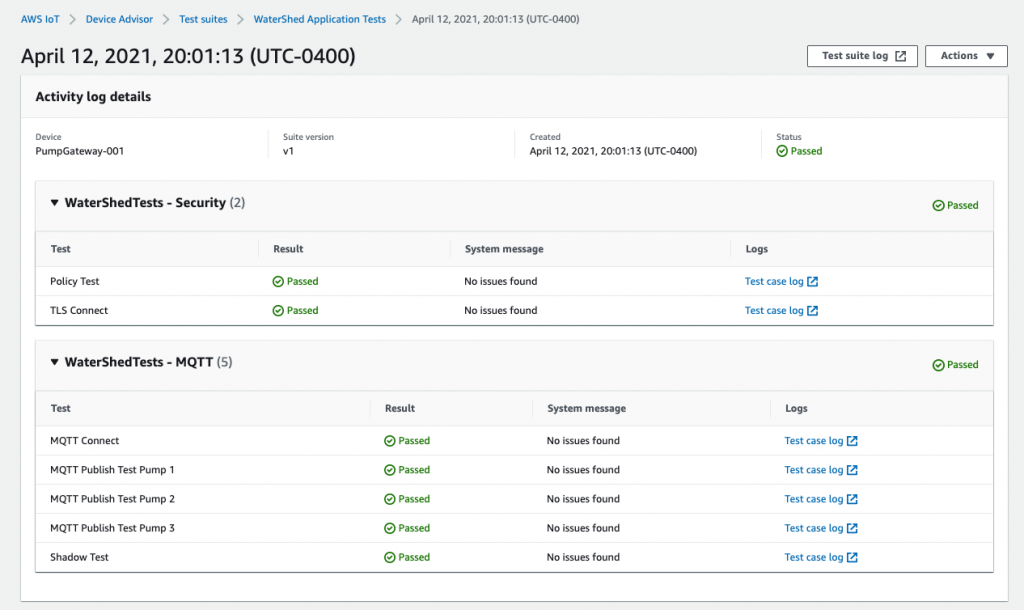 Now that all the Test Suite Test Cases in AWS IoT Core Device Advisor are passing, I change the endpoint in ESF to the AWS IoT Core ATS endpoint and connect the device. Data is now arriving in the Grafana dashboard and the application is running as expected.

Figure 14: Data is now arriving on the Grafana dashboard.

Eurotech is among the first AWS Partner Network partners to use Device Advisor to qualify their IoT devices for the AWS IoT Core Qualification Program. Using Device Advisor, Eurotech is able to test their software framework, Everyware Software Framework, to ensure their customers build reliable IoT device software. Everyware Software Framework passed all test cases in the Qualification Test Suite and is qualified for AWS IoT Core. Devices running ESF, such as the BoltGATE 20-31, are listed in the AWS Partner Device Catalog.

In this blog post, we examined a real-world use case where several common user errors, such as using a revoked certificate and publishing on incorrect topics, were spotted using AWS IoT Core Device Advisor. I was able to quickly test, debug, and resolve device software issues using Device Advisor, enabling me to spend more time on gaining insights from the data that my device produces. You can test your device’s reliable connectivity, security, and specific use case requirements using Device Advisor by testing through the management console, or through a Continuous Integration/Continuous Deployment pipeline using the AWS CLI or AWS SDKs.