In this blog post, we’ll show you how to use new capabilities of AWS IoT Device Management fleet indexing. Starting now, you can use aggregation queries in conjunction with AWS Lambda and Amazon CloudWatch to automate fleet monitoring.

When managing Internet of Things (IoT) devices, it can be challenging to monitor the state of the fleet. The complexity is due to many factors: the number of devices, number of dynamic states to monitor, and number of notification mechanisms for fleet state change. AWS IoT Device Management is a service that enables you to onboard, organize, monitor, and manage remotely connected devices at scale.

Within AWS IoT Device Management, fleet indexing allows you to index the registry, device shadow, and connection state for every device in your fleet, and search for devices based on any combination of these attributes. You can use fleet indexing to query which devices are running a particular version of firmware, or to query which devices are actively connected to AWS IoT services.

At a high level, this blog post walks through four steps:

The blog post uses the AWS Management Console to execute the steps. You can also execute the same steps by using the AWS Command Line Interface (AWS CLI).

You can enable fleet indexing by choosing Settings in the AWS IoT Device Management console. Be sure that thing connectivity indexing is enabled, as we’ll be using connectivity fields in the aggregation queries. 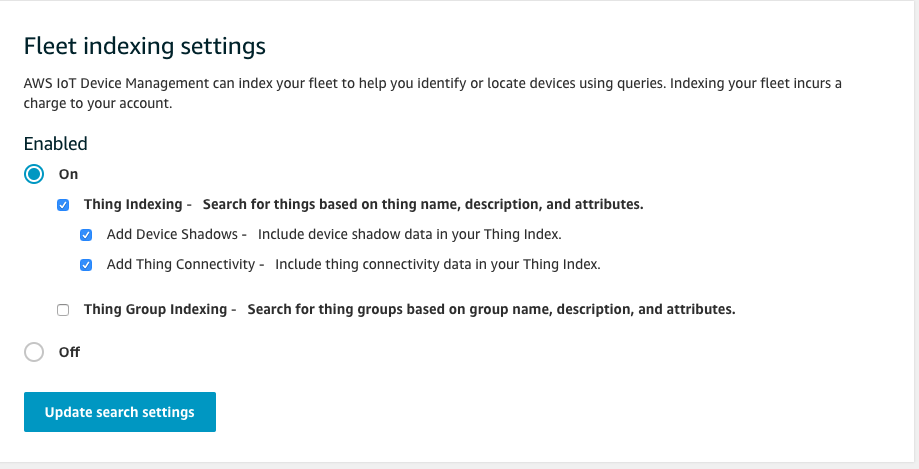 In the AWS IoT Device Management console, choose Things, Search Things to test the aggregation query before building the Lambda function. The following is an example request and response.

You can change the query string to include any registry or shadow parameters.

GetStatistics permission is required to run aggregation queries. There are two steps for this permission definition: first, a policy needs to be created, then a role can be created and the policy in the first step can be attached to the role.

The policy needs permissions to publish the CloudWatch logs, publish CloudWatch metrics, and allow the iot:GetStatistics action on the index resource. Create the policy in the IAM console by choosing Policies, Create Policy.

Select AWS Lambda as the service that will use this role 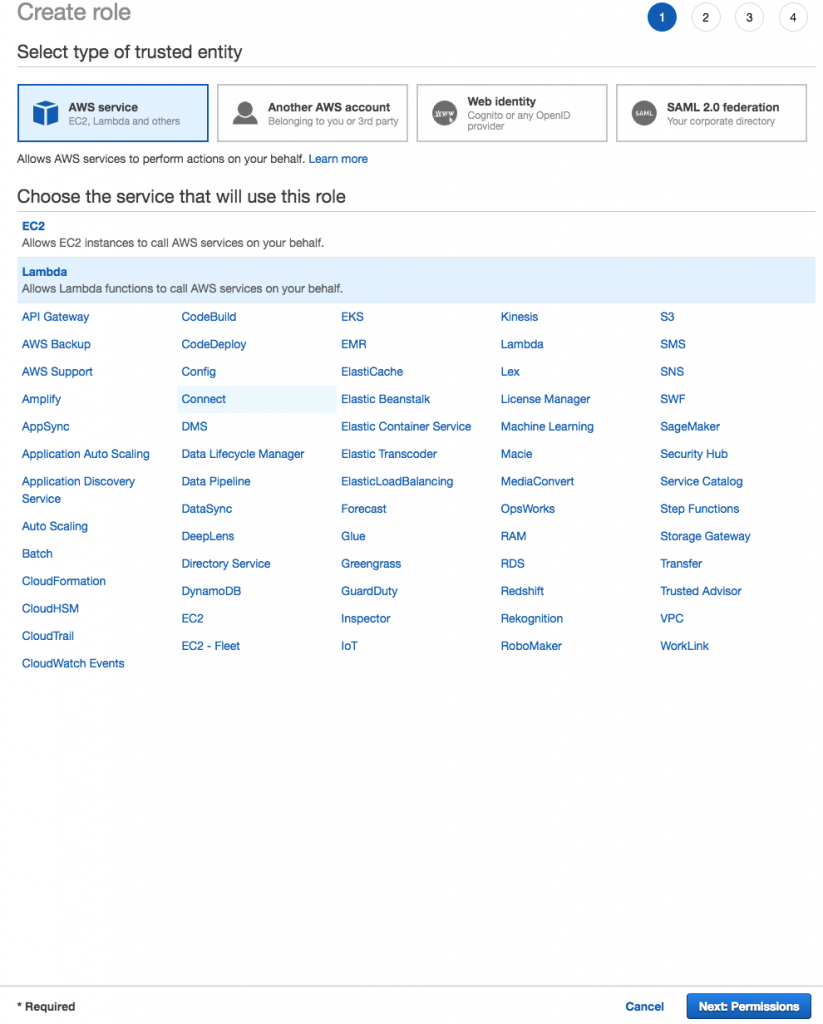 Attach IoTFleetMetricPublishPolicy to the new role 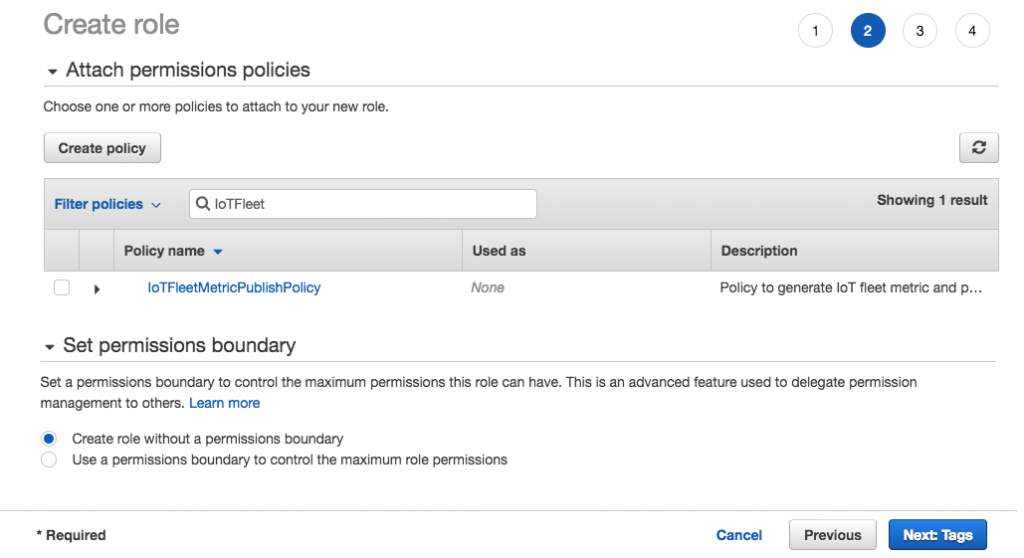 Review and create the role 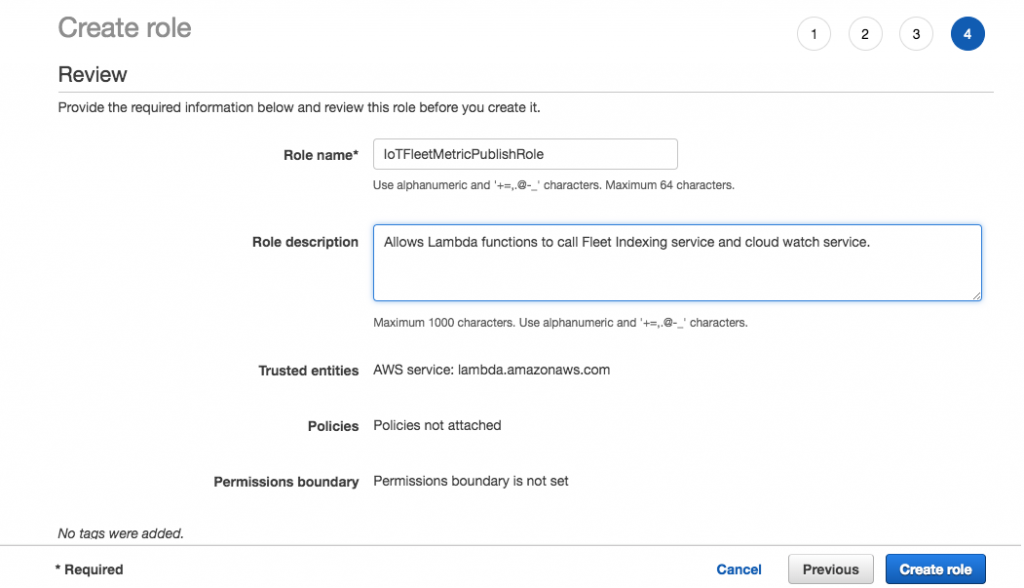 Define and configure the Lambda function

In this step, we create and define a Lambda function named IoTFleetMetricPublisher. The function will query the fleet index every five minutes to find the number of connected devices, and then publish it as a metric to CloudWatch.

CREATE AND CONFIGURE THE LAMBDA FUNCTION 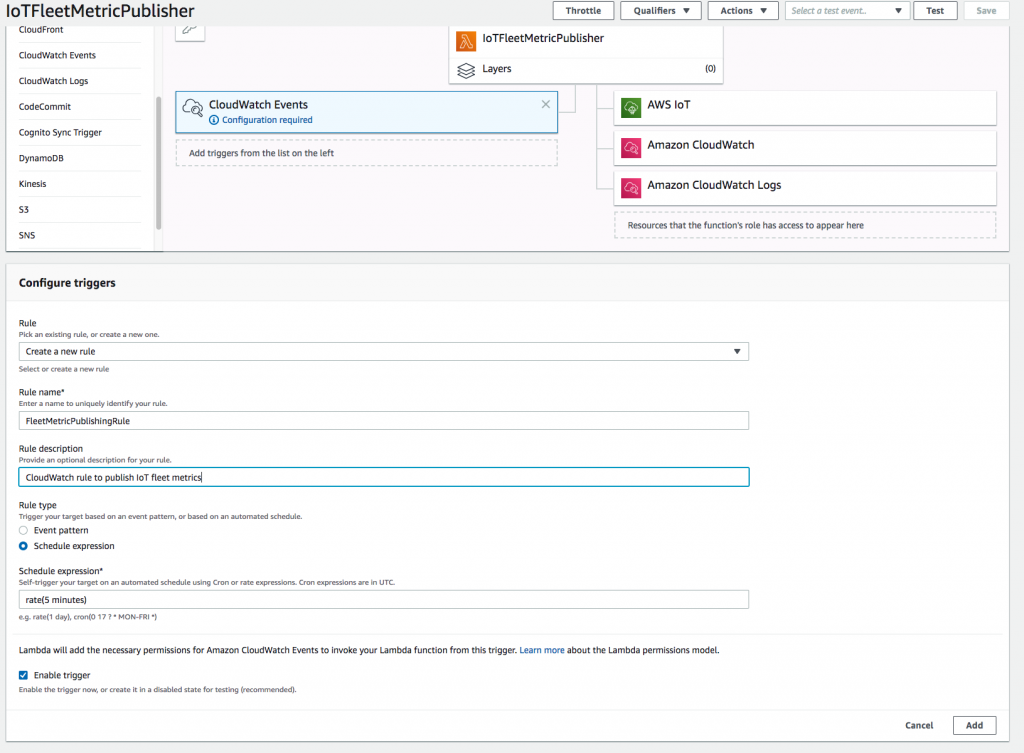 We’ll choose Node.js as the programming language for creating the Lambda function (Java and Python are the other alternatives). The Lambda function calls fleet indexing to find the number of connected devices. The result of the call is published as a CloudWatch metric named ConnectedDevices under the namespace IoTFleetManagement. The Node.js code is shown below.

In this step, for Code entry type, choose Edit code inline, and for Runtime, choose Node.js 8.10. Then copy the previous code listing to the inline code editor window, as shown below. 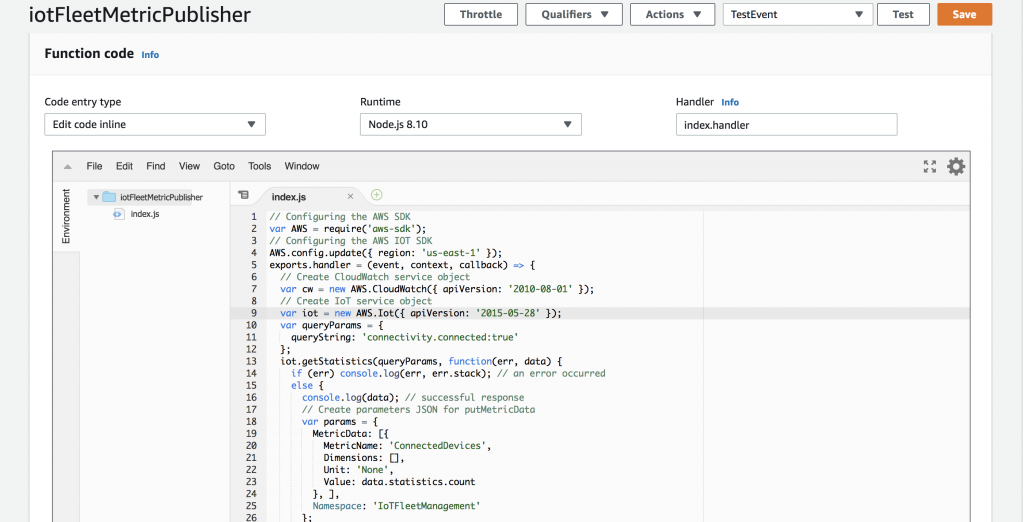 Save the Lambda function.

Define a Lambda Layer to use the latest AWS SDK

The default version of AWS SDK available under the Lambda run time is not latest. In this step we will define a Lambda layer and associate the Lambda layer to the Lambda function.  First we have to create a zip file which contains the latest AWS SDK. Execute the following commands in a command line to create the zip file.

After creating the zip file, you can define the Lambda Layer by choosing Lambda,Layers,Create layer.  Create a Lambda layer called awsSDKLambdaLayer. Select the nodejs.zip created in the previous step for uploading.

The last step is to attach the newly created Lambda layer, awsSDKLambdaLayer to the IoTFleetMetricPublisherLambda function.

After the previous step, Lambda will automatically start publishing the metric to Cloudwatch every five minutes. In this step, we build a dashboard and configure an alarm in CloudWatch using the metric published by the Lambda function. 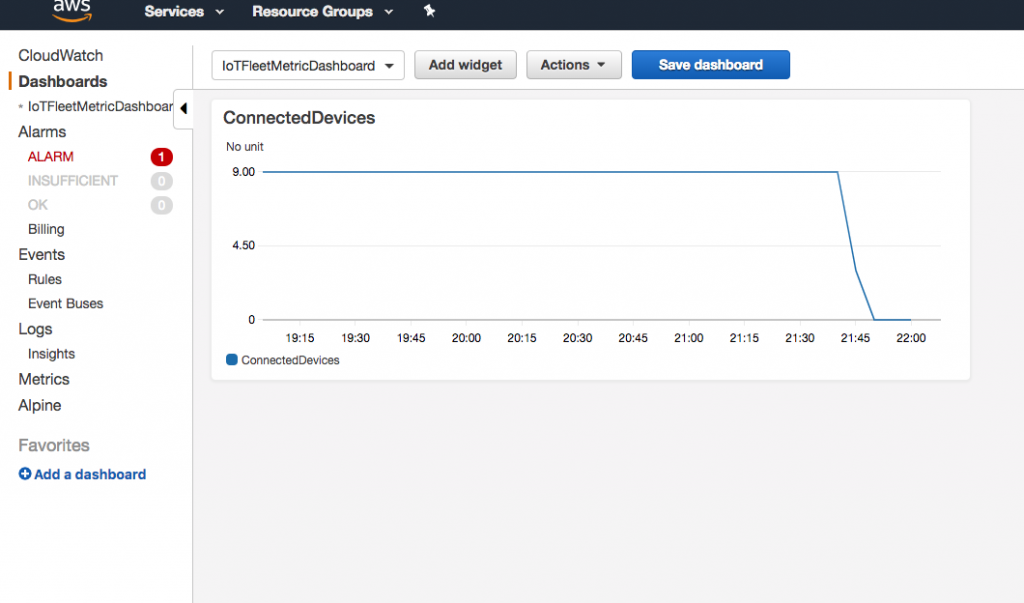 Create an alarm on the CONNECTED DEVICES METRIC

You can create alarms in the CloudWatch console by choosing Alarms, Create Alarm. In this step, we create an alarm named ConnectedDevicesAlarm that is triggered if the number of connected devices metric falls below 5 for two data points within a 15-minute window. 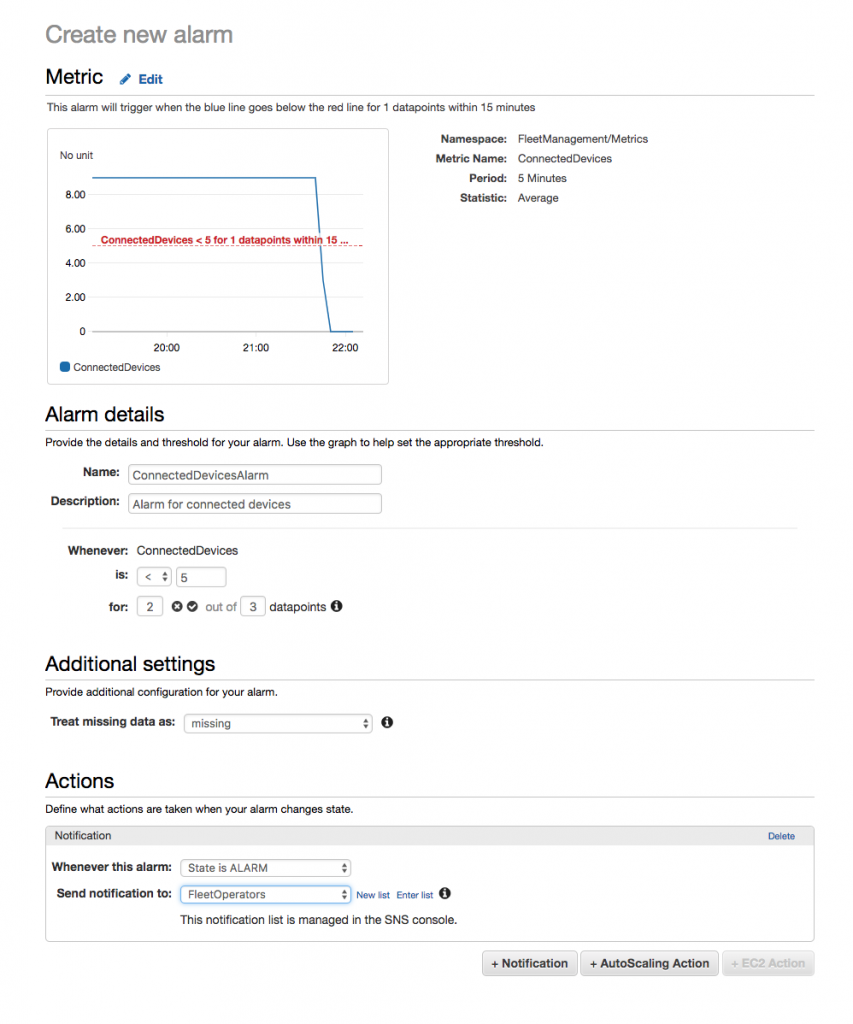 You can also use aggregation queries against the thing group index.

Although the example here is a start, there’s much more that AWS IoT Device Management offers to onboard, organize, monitor, and remotely manage connected devices at scale.