An Amazon CloudWatch dashboard is a customizable home page in the CloudWatch console that monitors multiple resources in a single view. It can consist of a number of widgets, with each widget providing operational information about different resources monitored by the dashboard. For media workflows, CloudWatch dashboards can make it easy to view and monitor the status of workflow components in real time and can simplify troubleshooting when needed.

This blog post describes two methods for automating the creation of CloudWatch dashboards that present widgets in a consistent, user-friendly layout optimized for media workflows. One method uses a Python script and the other applies an AWS CloudFormation template that utilizes the Python script. If you already have a working environment for the AWS SDK for Python (Boto3), the Python script will be easiest to use. This is also true if you have a large number of dashboards to create. If you don’t use the AWS SDK for Python, then the CloudFormation template will be the easiest solution for you. Both approaches are designed for media workflows that incorporate the AWS Elemental MediaLive and AWS Elemental MediaPackage services and will generate a dashboard with widgets that present key metrics from those services during operation. Please note there are many different ways to achieve the same result programmatically.

For sake of simplicity, these examples make several assumptions. The assumptions for running the Python script directly are:

Assumptions for both the Python script and the CloudFormation Template are:

Execution of the python script

The script has a comprehensive help function that can be accessed by the command line option “-h” or “–help”, e.g.

The MediaLive ARN list file <MediaLive_Ch_ARN_LIST_file> should be a text file that has a single MediaLive Channel ARN per line, e.g.

The script ignores duplicate entries and empty lines in the list file.

An example:
Create a CloudWatch dashboard for the MediaLive channel with channel ARN arn:aws:medialive:us-west-2:0123456789:channel:123456 and call the dashboard “My First Dashboard”.

Execution of the CloudFormation Template 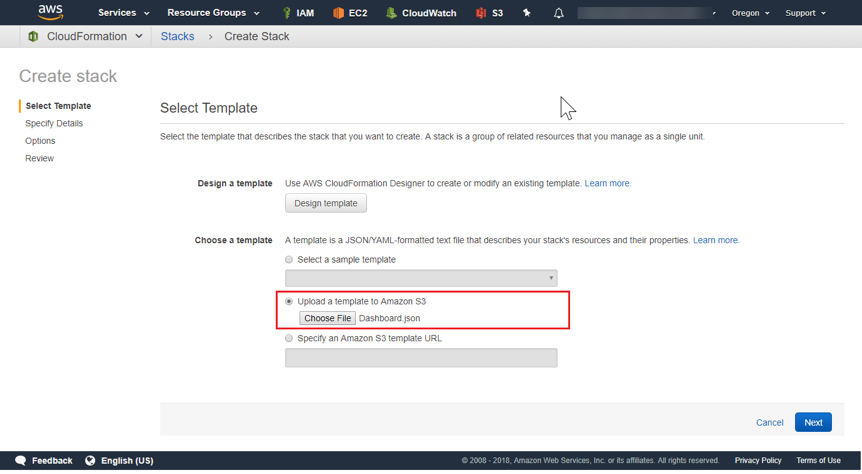 Figure 1. Set the template file to be used to create the CloudWatch dashboard

Figure 2. Set the parameters of the CloudFormation Stack

On the Review page, you need to acknowledge that CloudFormation may have to create IAM resources. Click the checkbox on the lower half of the page. 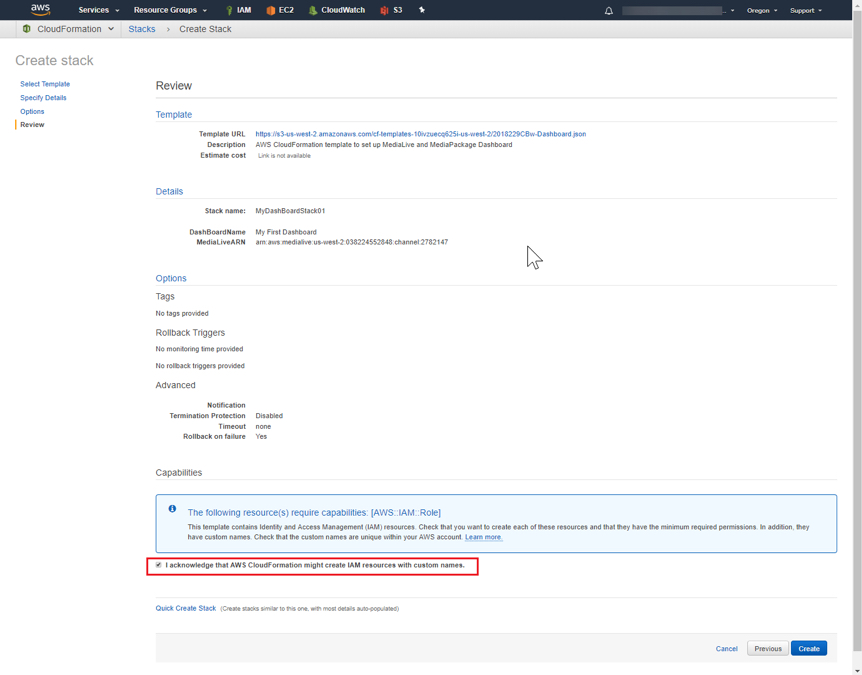 Click “Create” to request that CloudFormation create the stack, which in turn will create the CloudWatch dashboard.

The CloudFormation console will show “CREATE_COMPLETE” when the stack is fully created.

Explanation of the Script

The script contains a dashboard template that defines the different widgets in use by the dashboard, as well as the location and size of each widget. It populates the template with the information retrieved from the three services, and finally creates the dashboard in the user’s account. It provides feedback during its execution and will state if it was successful in creating the dashboard.

Structure of the Dashboard

The dashboard is broken up into two sections, namely the Packaging & Origin section (i.e. MediaPackage related) and the Encoding section (MediaLive related).

This section consists of six metrics related to the MediaPackage service:

The Encoding section of the dashboard is relate to the metrics of the MediaLive channel:

The different Packaging & Origin and Encoding widgets are laid out is shown in Figure 1 below.

Figure 6. Block diagram showing the layout of the CloudWatch Dashboard

Here are a few screenshots for the example dashboard “My First Dashboard” created above. The workflow consists of the following:

Note that the name of the dashboard was modified to “My-First-Dashboard”, since CloudWatch dashboard names can’t contain any space characters.

Figure 7. The first two widgets of the Packaging and Origination section of the dashboard

Note that in Figure 9 the graph for the 3xx & 5xx Status Codes is not showing any data, since for the time slot showing there were no Redirection or Server errors reported.

Figure 10. Start of the Encoding section of the dashboard, showing the Input/Output Video Frame Rate

Figure 11. Network  In and Network Out graphs

Note that additional information is available in the various graphs of the dashboard, by hovering the mouse over the area you want to see more information displayed. See Figure 14 for an example of this. 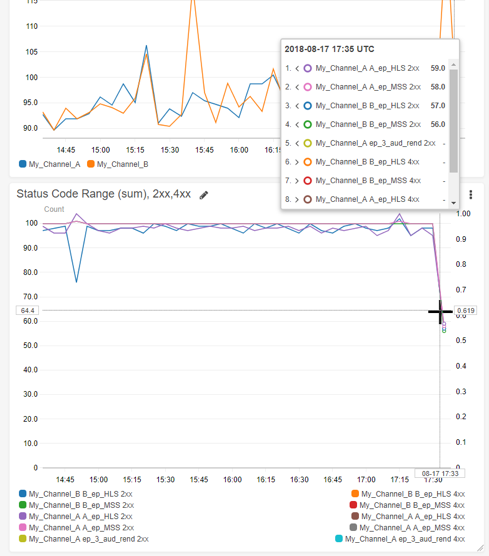 Figure 14. Mouse over regions in the graphs will show more information

The Python script and CloudFormation template are obtainable from the GitHub repository: https://github.com/aws-samples/aws-medialive-mediapackage-cloudwatch-dashboard

A special thanks to Dirk-jan Boekee, Sr. Technical Specialist at AWS Elemental who created the CloudFormation template used in this post.