Authored by Geoff Stedman, Chief Marketing Officer at SDVI. The content and opinions in this post are those of the third-party author and AWS is not responsible for the content or accuracy of this post.

The exponential rise in demand to distribute content out of the archives to multiple platforms in the right format with the right metadata and on time is stretching the capacity of most supply chains.

As more platforms launch and existing platforms expand into more and more international markets, it is the content teams who take responsibility for fulfillment. They are charged with making sure every title, every localized version, and every piece of metadata from often vast content libraries goes where it needs to go. Yet time-to-market pressures don’t get any easier.

One of the more notable recent deals was with A+E Networks (co-owned by Hearst and Disney) and Discovery. Both companies recognized the value of offering consumers the best selection of programming carried on the new SVOD service Discovery+ when it launched on January 4, 2020.

Unscripted library content from A+E Networks’ catalogue were to be carried on Discovery’s new streaming platform.

“Our team is focused on making our archive more agile and able to fulfill any deal that comes along,” says Dave Klee, VP of Strategic Media Solutions, A+E Networks.

“When we looked at what needed to be done, we realized it would not be possible with the resources we had internally at either organization,” says Josh Derby, Group VP of Advanced Technology and Development, Discovery. “We had to figure out a way to do a fast and effective business-to-business connector between our two companies to make it work.”Discovery’s existing process was tailored to production companies delivering a handful of assets, such as a new episode of a series each week. For this, it offers an application called Discovery Producer’s Portal.

“Content producers can upload files via Signiant or Aspera and then enter the metadata about those files manually via the app,” explains Derby. “That works really well for production companies delivering a few assets at a time, but when you need to deliver a large number of assets in a short time that gets really labor-intensive.”

They calculated that a manual workflow, just about possible with their existing setup, would take 30-60 days for a team of five working around the clock. At that rate, A+E Networks and Discovery would miss the all-important launch deadline.

Fortunately, both companies used Amazon Simple Storage Service (Amazon S3) for storing their content archives, and they shared a common supply chain platform in SDVI Rally and therefore a common ecosystem language on which to build a solution.

“Our existing relationship with A+E through the SDVI user community is what enabled this project,” Derby says. “A lot of the folks who use SDVI have common questions and pro coding tips for the Rally environment. We were able to use this as a springboard to coordinate this project.”

SDVI Rally is a cloud-native media supply chain platform that deploys all the applications and infrastructure in AWS to create a dynamic, responsive media supply chain. AWS has extensive experience providing the supply chain infrastructure that media companies need to support ingest, processing, packaging, and distribution of media content. Together with SDVI, this solution provided the technical capabilities that Discovery and A+E Networks needed to achieve the agility and efficiency required to meet the deadlines. 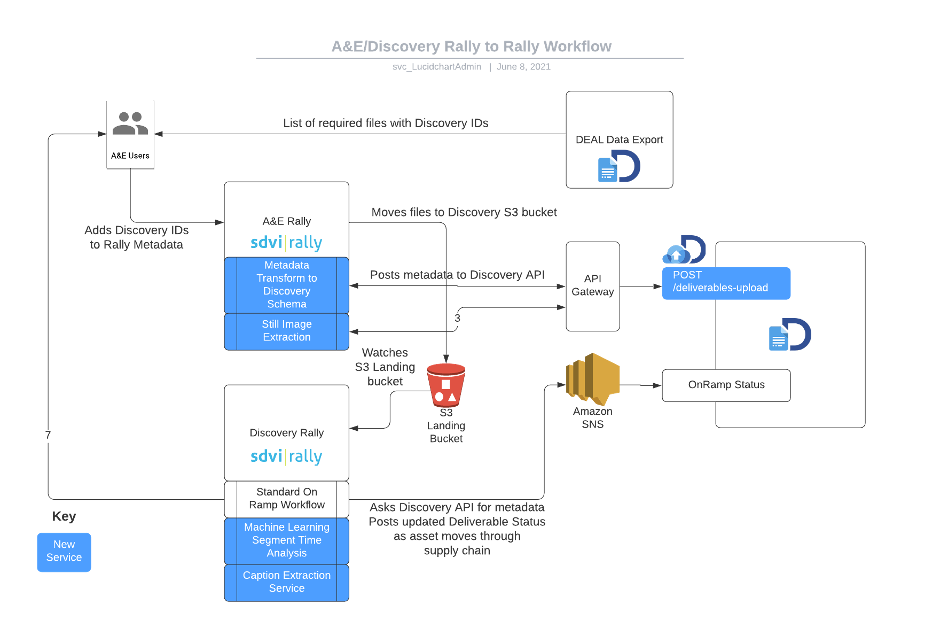 With a deep understanding of each other’s internal supply chain grounded in Rally, A+E and Discovery teams were able to plan, adapt, and design a B2B supply chain with Rally configuration on their respective content systems. “There was a lot of give and take on both sides,” Derby added.

A+E Networks, for example, needed to upgrade its version of the SDVI file movement to match that of Discovery, which had already upgraded. Both companies had different ways of handling captions so A+E provided caption de-embedding code for Discovery to test and integrate with its existing code to make files extensible and parsable.

The breakthrough was facilitating direct contributions from A+E Networks’ systems to Discovery via API.

“We’d already done some work on this but when A+E agreed to be the beta tester of our direct contribution API the project really took off,” Derby says.

One of the reasons Discovery doesn’t conventionally perform bulk uploads is because its supply chain system needs to know the contextual identity of everything coming in the door. The new API was designed to reach into its contractual system and automatically assign those assets a unique Discovery identity.

“When you upload through Producer’s Portal that automatically happens so there’s no mystery on ingest but if you are dumping a bunch of files in an Amazon S3 bucket that’s not the case,” Derby says. “We were able to get the A+E system connecting to our assets with the API which in return assigned each asset a Discovery identity token. From there, we were able to set up a bridge between our respective Rally systems and our Amazon S3 storage buckets that made the content copying and workflow setup possible.”

Remarkably, the time from testing the supply chain to firing across assets in earnest took just a week.

“When you’ve put all the work in and then you open the floodgates and see it all go into the system as planned it’s a really powerful feeling,” Klee says.

The first payload was pushed live from A+E Networks to Discovery+ in December with the workflow now in regular use for bulk content transfer.

“We implemented that full initial load between the silos in about 13-15 hours,” Derby reports. “It came through like lightening once we had it connected because we were doing all cloud-to-cloud transfers.”

This first engagement centered around media files (video, audio, still images) but both companies are looking to automate more and more of the deliverables such as scripts.

“We’ve been working back and forth with Dave and his team and also expanding to cover captions and subtitle files,” Derby says. “Most of the metadata we’ve exchanged so far has been technical, but we are moving toward using the Rally interconnect as a way of exchanging descriptive metadata.”

Rather than the best part of two months using manual processes, the entire library was transferred in five days.

“Not so long ago, even transferring a few hundred titles at the same time would have seemed a very big deal, but with cloud integration and file management systems like SDVI we can do this in just a few hours,” Klee says.

He continued, “We want to get to a point where you have a list of titles, you click a button, and off they go. While media is very close to that point, the metadata is more complicated. We’re working on the next steps to streamline that side of things.”

This solution that worked for Discovery and A+E Networks illustrates what’s possible from AWS and its partners like SDVI. For more information on AWS Media Supply Chain and Archive solutions and its ecosystem of more than 80 AWS Partners, see https://aws.amazon.com/media/supply-chain-archive/.

SDVI Rally is a cloud-native media supply chain platform that supports business agility, efficiency and growth by deploying all the applications and infrastructure needed to create a dynamic, responsive media supply chain. It deploys the appropriate resources, services and 3rd-party applications, based upon resource availability, budgets and relative commercial priority. Contact SDVI here.