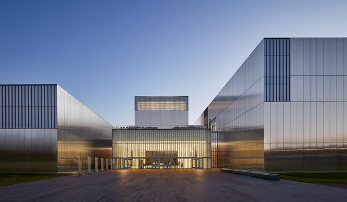 What do Hollywood blockbusters and one of the world’s most prestigious global architecture, interior design, urban planning, and engineering firms share in common? Turns out, quite a bit, and not just because it designed the Walt Disney Company’s Manhattan headquarters.

From One World Trade Center in New York to Dubai’s Burj Khalifa, the portfolio of Skidmore, Owings & Merrill (SOM) features an abundance of innovative and iconic structures the firm has helped bring to life over the past 85 years. When SOM CTO Rob DeMillo joined the firm in 2019, he brought with him a deep background in media and entertainment (M&E) technology and a vision for the future of AEC (Architecture, Engineering and Construction). Among his M&E accomplishments is Nimble Collective, a cloud-based animation platform startup he helped to grow until it was acquired by Amazon, and launched as Amazon Nimble Studio in April 2021.

Taking a cloud-based approach to render allows SOM to remain agile and tap resources only as needed, and just as easily scale down during production lulls. Now, it is extending this flexibility and scale throughout its workflow. By bringing in a small, world-class collection of cloud software engineers (headed by technology industry veteran Jilbert El-Zmetr) to work with the existing, formidable technology teams, SOM plans to be the first entirely cloud-based architecture and engineering firm by October 2021. 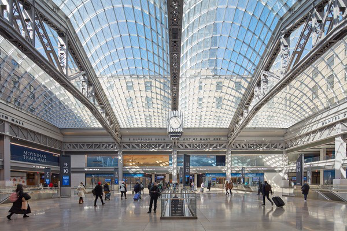 SOM’s pivot away from physical hardware is a pioneering move in the AEC space that aligns with a growing migration by creative studios in M&E to the cloud. Broadly, both industries require project planning (or storyboarding), systems setup (establishing infrastructure and tools), coordination and cooperation (creating work), rendering, and a final product. Similarly, creative studios grow and shrink their talent pool based on projects, while AEC firms often create appropriately skilled teams within the company based on the job requirements. In both cases, once a project is complete, it dismantles or sidelines the physical infrastructure until it is needed again, sometimes immediately and in others, it sits idle for a while as a wasted resource. Though architectural designers rarely have to find new employment like animators do in between projects, they often have to physically move workspaces. With its infrastructure on AWS, SOM designers and engineers can now access secure, centralized assets on extremely powerful virtual workstations using modest laptops (and external monitors if they chose), anywhere–whether in an SOM studio or elsewhere in the world.

While the technical details of the implementation were certainly complex, one of the biggest challenges DeMillo faced in spearheading SOM’s transition to AWS was helping employees adjust their mindset to realize that a cloud-based workflow was not only possible, but also more efficient, and in a lot of ways more effective, than on-premises workflows. With a few mouse clicks on a laptop, a designer can stream a virtual workstation with 128GM of RAM, a 32-core processor and substantial GPU card–in-office or remotely.

Having a unified infrastructure on AWS allows SOM to easily collaborate across studios. For example, architects, designers, and engineers across SOM offices in Shanghai, San Francisco and Chicago can now seamlessly work together on a project for a new building, not restricted by physical location. In the same vein, IT support is now delivered on a company-wide level, instead of a per office basis. Software engineers address requests as they come in, regardless of where the request came from, and since offices span most time zones, internal support is almost always available.

In addition to seeing significant operational efficiencies with the cloud, SOM has noticed a massive decrease in power consumption. Based on preliminary power readings and modeling, the firm is anticipating a 90% drop in on-floor power for computing across its offices once the existing on-prem computing power is cycled out of service. This aligns perfectly with the firm’s commitment to building a more sustainable world.”

Asked to reflect on the move to AWS and its future implications for SOM, DeMillo offered, “The immediate impact is obvious. Teams are no longer restricted to working on a project from a specific office, or remotely with another office through clunky hand-off mechanisms. As a truly worldwide firm leveraging the cloud, we can now have a follow-the-sun mentality.”