For enhanced security, it’s often preferable to place resources in AWS within a subnet with no internet access. Recently, AWS expanded the number of services supported by interface VPC endpoints within the AWS ecosystem, so it’s now easier than ever to run AWS OpsWorks for Chef Automate or AWS OpsWorks for Puppet Enterprise within an isolated subnet. The solution outlined in this blog post doesn’t use a NAT instance or a NAT gateway, so it is a fully private solution, which many users require. 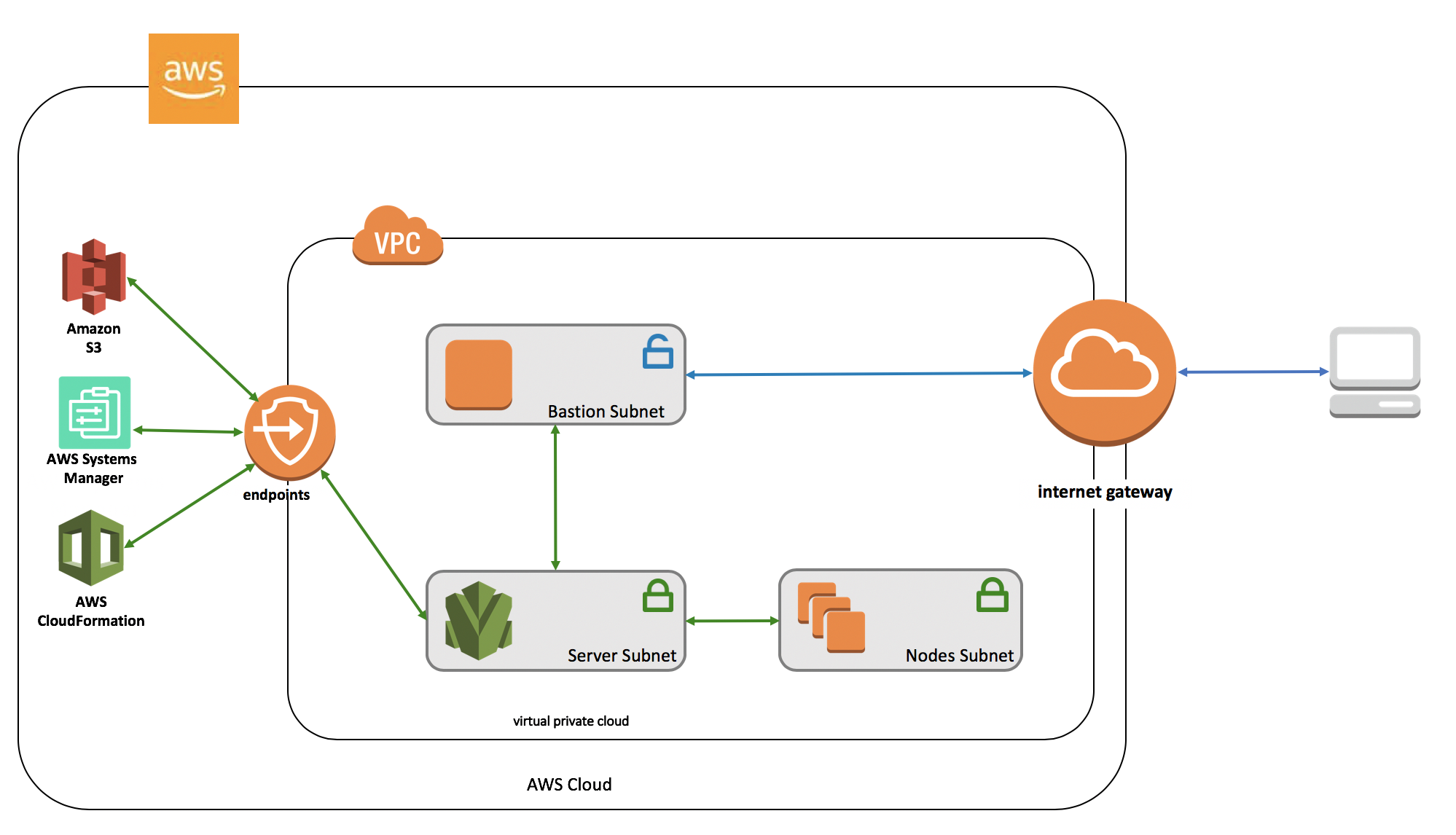 In this solution, all required resources will be created, starting with using the Amazon VPC service to create a new VPC. The main template creates a few key resources:

There are also two optional child stacks. One stack will create the bastion host, while the other will provision the AWS OpsWorks for Chef Automate server.

The CloudFormation template first requests some information from the user, via CloudFormation parameters. Two of these parameters allow CloudFormation to determine if it should provision the conditional resources mentioned previously. The bastion host is optional because not all OpsWorks CM customers need SSH access to their Chef Automate server. However, it’s important to note that the bastion host is also required to reach the UI, so creation of the bastion host is strongly advised. Creating the Chef Automate server is also optional, if you want to create the underlying VPC components and then create the server using the AWS Management Console. Both optional templates will be available in Amazon S3, should only those resources be required.

In this solution, there two types of subnets: private and public. There are two different sets of requirements for security groups. The bastion host, if created, will exist in the public subnet, so SSH access is required. Egress rules also need to be open, so that traffic can leave the bastion host to go to its destination.

The private subnets are going to contain the OpsWorks CM resources, so port 443 is open for HTTPS communications. To connect using SSH to these resources via the bastion host, port 22 will be open to the public subnet security group. This security group will also have port 3128 open, for the squid proxy. If adjustments are made to this solution, only 443 would need to remain open because the proxy and SSH could be removed.

After launching the CloudFormation stack, you can manage your AWS OpsWorks for Chef Automate server from your local workstation. If you do not already have the ChefDK installed, please do so before moving forward. For demonstration purposes, the following steps are for a Mac workstation, although the equivalent steps should work in any other Linux distribution or Windows OS. Note that these steps will require the starter kit and sign-in credentials from the Chef Automate dashboard, which can be downloaded from the OpsWorks console while the server is being created. If needed, you can reset these items in the AWS Opsworks console. The console will also contain the Chef Automate server URL. This URL will be used in the examples moving forward, and should be substituted for private-subnet-opsworks-xxx.us-west-2.opsworks-cm.io.

This entry in the /etc/hosts file is necessary before setting up a tunnel:

It is possible to set up the tunnel on a different port of the workstation. However, this example establishes the tunnel using port 443. This requires administrative privileges, which is why sudo was used in the previous command. After running this command, open a web browser and input the URL as https://private-subnet-opsworks-xxx.us-west-2.opsworks-cm.io. This way, you can check out the OpsWorks Chef Automate dashboard easily from your workstation, instead of using the bastion host directly. After following these steps, you should see the sign in console for Chef Automate: 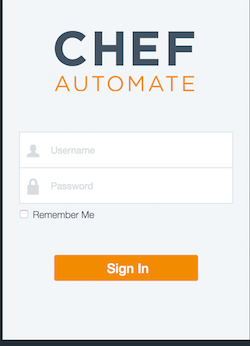 To SSH to the server, the bastion host is used as an intermediary between the local workstation and the OpsWorks CM server:

Note that in this case, the same key is used in both the bastion host and the OpsWorks for Chef Automate server. This setup saves an extra step in the process of getting logs from the OpsWorks CM server, because it’s possible to connect right from the local workstation to the server, instead of having to first use SSH to connect to the bastion.

After the OpsWorks CM server is successfully launched, download and unzip the starter kit. Because the starter kit contains some essential configuration files, all of these commands are run from within the unzipped directory.

First, let’s grab cookbooks from Berkshelf, which is a common dependency manager for cookbooks.

Next, make sure that you can successfully connect to the server, using knife ssl check:

Then, go ahead and upload the cookbooks:

After this, navigate to the dashboard in the browser as described earlier ( in the “Accessing the server” section), and observe that the cookbooks uploaded from the workstation are now visible on the dashboard.

To verify node association for the new server, launch a new EC2 instance with the prerequisites for launching a OpsWorks CM node in any of the two private subnets from the VPC template. In this example, a private subnet is used to launch a nodes in order to illustrate a fully private solution within the AWS infrastructure. However, if you prefer you can use the bastion host subnet as well to launch the nodes to make them accessible from the internet.

In this scenario, it’s not possible to use the OpsWorks user data script for unattended nodes because Chef relies on external internet access to download scripts directly from their website when registering the node. So instead, knife bootstrap will be used to associate the nodes.

While the new node EC2 instance is being launched, create a new SSH tunnel to the OpsWorks CM server as demonstrated earlier. Then, run:

Those commands will add the SSH key to the agent so that it can be used on the following bootstrap command via the SSH gateway.

In this command, the bastion host’s squid proxy is used because Chef relies on downloading some scripts from their website while registering the node. After running this command, confirm in the Chef Automate dashboard that the node was successfully associated.

This blog post walked you through how to create a wholly private configuration management environment. To eliminate the need for external internet connection through a NAT or IGW, VPC endpoints are leveraged. A bastion host is used, which, when combined with SSH tunneling, allows connection to the Chef Automate dashboard directly from a workstation. Node association for this private setup will require running knife bootstrap in the bastion host from the workstation while using the bastion host as an SSH gateway. To see the full solution, check out the templates on Amazon S3.