Many customers use Amazon EMR with Apache Spark to build scalable big data pipelines. For large-scale production pipelines, a common use case is to read complex data from a variety of sources. This data must be transformed to make it useful to downstream applications, such as machine learning pipelines, analytics dashboards, and business reports. Such pipelines often require Spark or Hadoop jobs to be submitted on Amazon EMR. This post focuses on how to submit Hadoop or Spark jobs on an Amazon EMR cluster using AWS SystemManager Run Command .

Run Command, which is part of AWS Systems Manager, is designed to let you remotely and securely manage instances. Run Command provides a simple way of automating common administrative tasks like running shell scripts, installing software or patches, and more. Run Command allows you to execute these commands across multiple instances and provides visibility into the results. Through integration with IAM, you can apply granular permissions to control the actions users can perform on instances. All actions taken with Run Command are recorded by AWS CloudTrail, allowing you to audit changes in your fleet.

In this post, I demonstrate how to use the SSM Run Command and submit Spark and Hadoop jobs on Amazon EMR securely without using SSH, as interactive SSH access to traditional server-based resources often comes with high management and security overhead. User accounts, passwords, SSH keys, and inbound network ports need to be maintained to provide this level of access, and there is often the additional cost of supporting additional infrastructure for bastion hosts, etc.

Before you get started, make sure you have done the following: 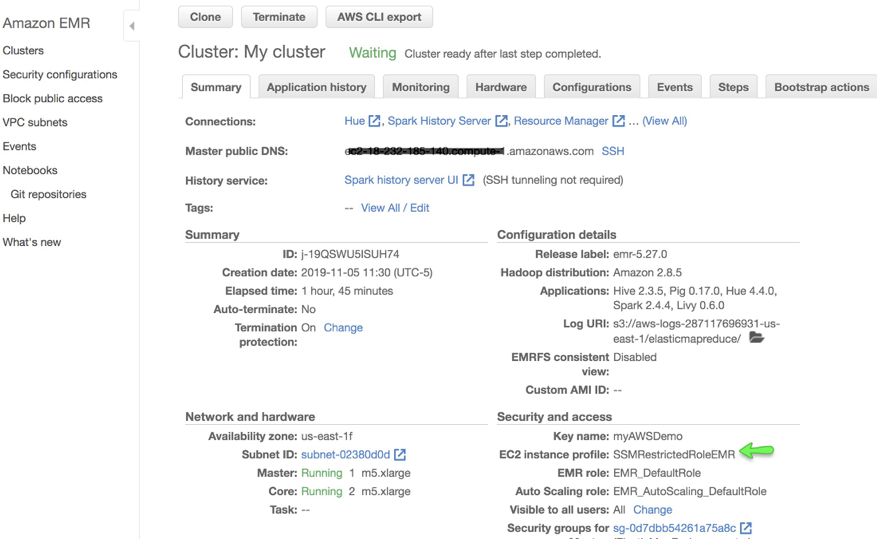 In this step, you pass the shell script as command parameter. The shell script invokes spark job as part of its execution. Scripts are copied from Amazon S3 to the Amazon EMR home/hadoop directory, as shown in the following screenshot.

Run Command provides options to choose an instance by tags, manually, or by a resource group. Select the Amazon EMR master node instance manually, as shown in the following screenshot

After the command is submitted, you can track the AWS-RunShellScript command from the UI. You see the status of the command as In Progress and, after it completes, as Success, as shown in the following screenshot. The results of the command persist on the Amazon S3 bucket

The output shown in the following screenshot demonstrates successful execution: 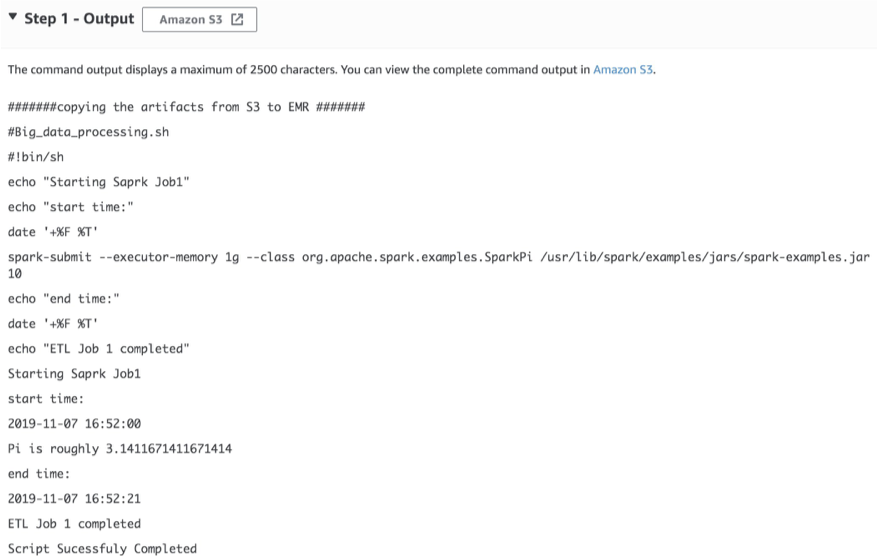 Note: If you plan to run multiple Apache Spark jobs at same time, invoke the shell script in background mode so that the next command can run without waiting for the current command to complete. Ensure the Amazon EMR has the supported configuration to run parallel loads.

In this example,  you pass a Hadoop administration command to check HDFS file system usage.

You can accomplish the same using the following AWS CLI command:

Open the Amazon EMR resource manager UI (http://master-public-dns-name:8088/) to verify the execution of the Spark or Hadoop jobs submitted using the run command, as shown in the following screenshot.

In this blog post, I demonstrated how to use the System Manager Run Command to submit Hadoop and Spark jobs on Amazon EMR without a SSH key. Results of Run Command execution are persisted in an Amazon S3 bucket. Systems Manager Run-Command provides a secure way to perform Amazon EMR operations and administration, and to install new software by executing shell scripts without SSH. 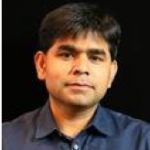 Suresh Patnam is a Senior Data Architect – Big Data at AWS. He works with customers in their journey to the cloud with a focus on Big data, Data Lakes, and Data Strategy. In his spare time, Suresh enjoys playing tennis and spending time with family.