In this article, we focus on advanced troubleshooting scenarios with middlebox appliances and SD-WAN in a global network on AWS.

A customer building a global network may wish to implement traffic inspection with their own network security appliances. Frequently this requirement is achieved through introduction of a transparent, middlebox appliance. AWS Transit Gateway allows administrators to steer traffic towards a Security VPC and through a network appliance within that VPC. Once inspected, traffic is forwarded to the destination, which could be in another VPC or on-premises network. Hence the term, middlebox. A box that sits in the middle and transparently inspects traffic. We illustrate a middlebox appliance placement in Figure 1 below.

SD-WAN is a popular option to connect remote sites over a private network. In many implementations, the private network is overlayed on top of the Internet through encrypted tunnels between SD-WAN appliances at remote sites and centralized SD-WAN hubs. AWS Transit Gateway can act as a hub and it natively integrates with a number of SD-WAN partners. Another option is to have SD-WAN headends running on EC2. With this option, AWS Transit Gateway becomes a router that moves traffic in and out of networks behind SD-WAN headends through the rest of the global network. Read more about possible architectures here.

With these two use cases in mind, we built a global network. It covers a variety of remote sites connectivity options and spans across multiple AWS Regions. 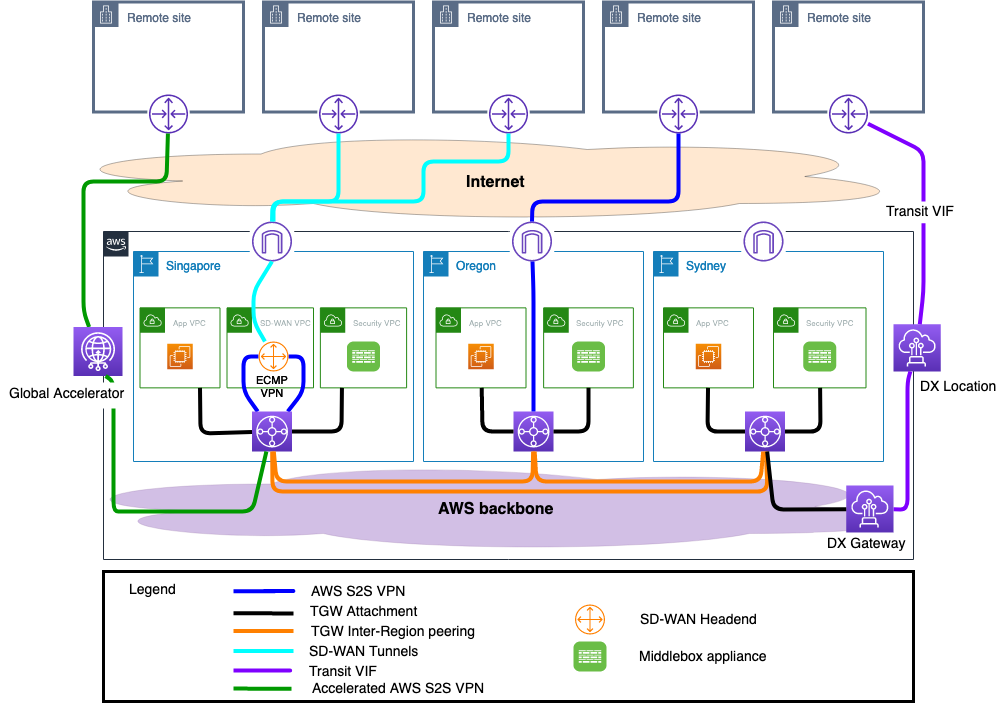 Figure 1: Logical diagram of a global network on AWS

Topology of our global network on AWS

A company that uses an AWS global network is likely to have presence in multiple geographic locations. In our case, we assumed offices are in North America, Australia, and Southeast Asia. Each remote office is connected via either AWS Direct Connect (DX), AWS Site-to-Site VPN (AWS S2S VPN), or using an AWS partner SD-WAN offering. We enabled Accelerated AWS S2S VPN with AWS Global Accelerator where needed. Connections to remote sites terminate at the regional network hub, an AWS Region. We also use AWS Transit Gateway’s ability to integrate network security appliances (middleboxes) to meet network security requirements.

To understand how routing is configured, we allocated hypothetical IP ranges to each network as follows:

We use these IP ranges to allocate VPC CIDRs as well as CIDRs used by remote sites. We also make use of the 100.64.0.0/10 range for middlebox appliance VPCs. This range is not routed throughout our global network. Check a blog post on “How to integrate third-party firewall appliances into an AWS environment” for details on how to configure a middlebox appliance and associated VPC. 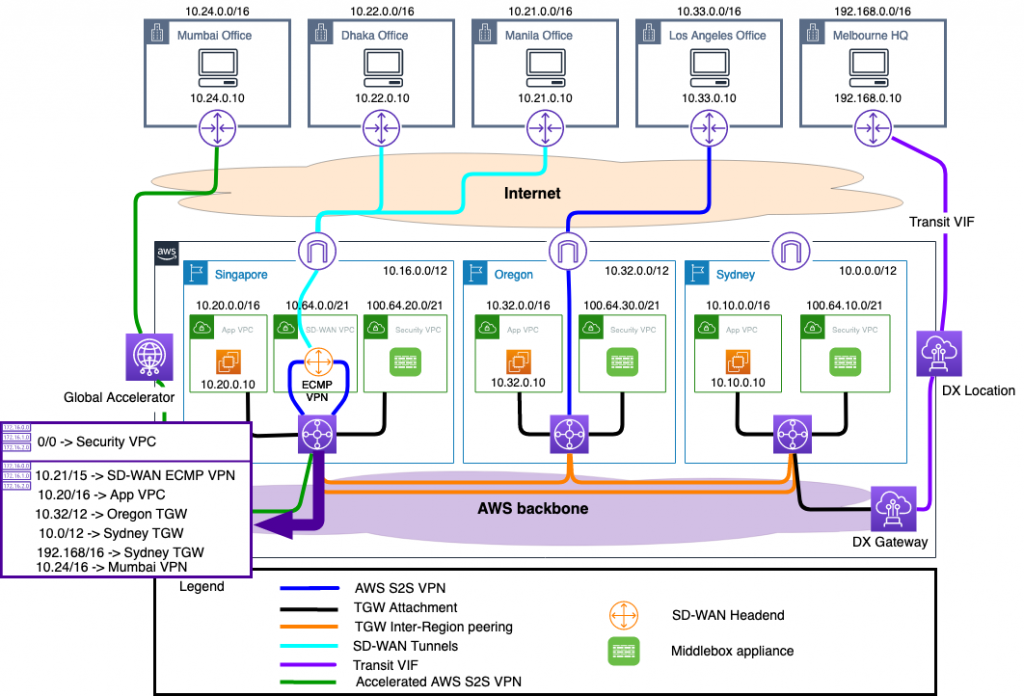 Figure 2: Network diagram of the hypothetical global network on AWS

These show the final result as viewed in AWS Transit Gateway Network Manager. 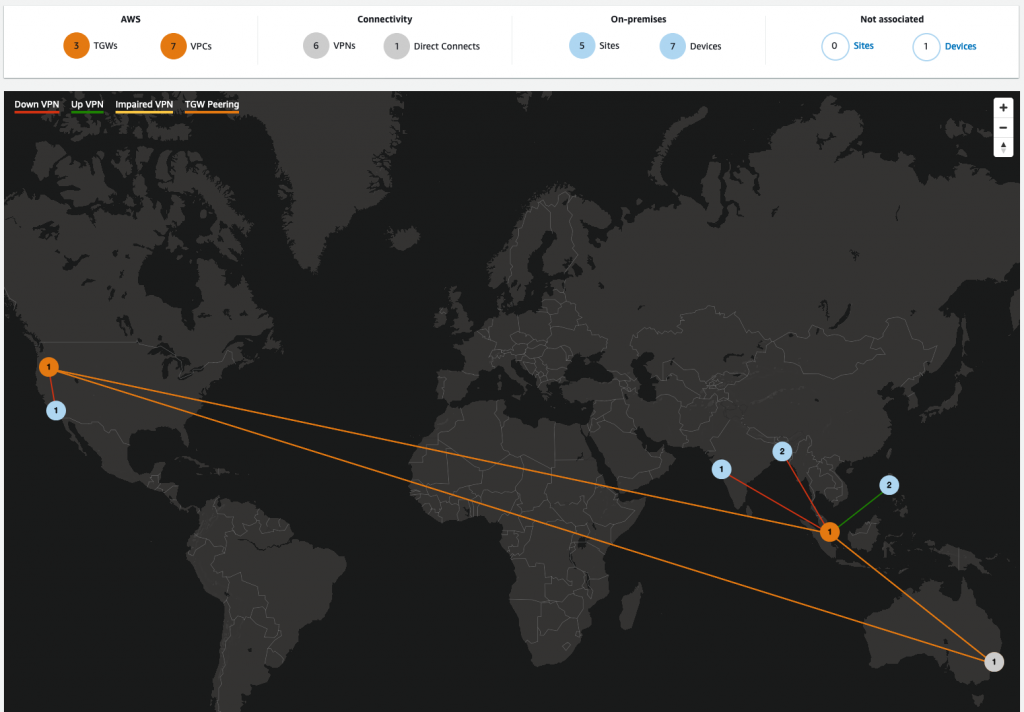 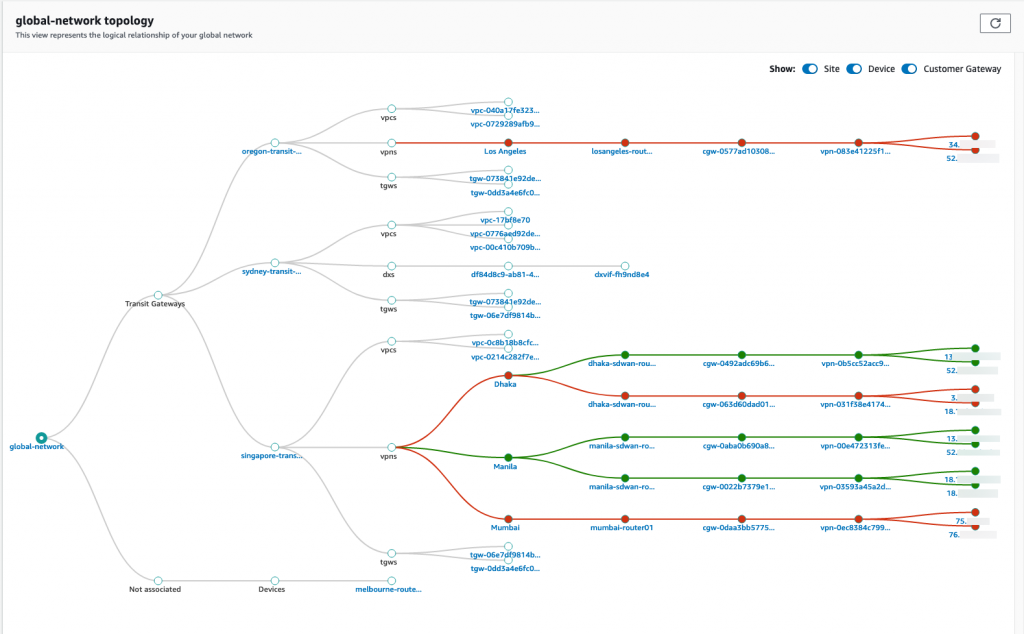 To troubleshoot misconfigurations and other issues with our global network, we will use AWS Transit Gateway Network Manager events and Route Analyzer.

Now that we have our global network built and AWS Transit Gateway Network Manager is configured, let’s dive into the advanced use cases we’ve prepared.

Use case 1:  On-premises connectivity to a VPC in remote AWS Region using a middlebox appliance

We have a AWS Transit Gateway connected to an on-premises network using AWS Direct Connect. We are using a middlebox appliance to inspect all the traffic. In this use case, we validate traffic going from on-premises network in Sydney to an application VPC in Oregon. Traffic goes across AWS Transit Gateway, peering through a middlebox appliance in Sydney and another in Oregon.

Once you click “Run route analysis” it will interactively prompt for potential middlebox appliances. You then select “Yes/No” from the drop down list.

Once route analysis is complete, the connection status, including the return path and middlebox appliance, is shown. 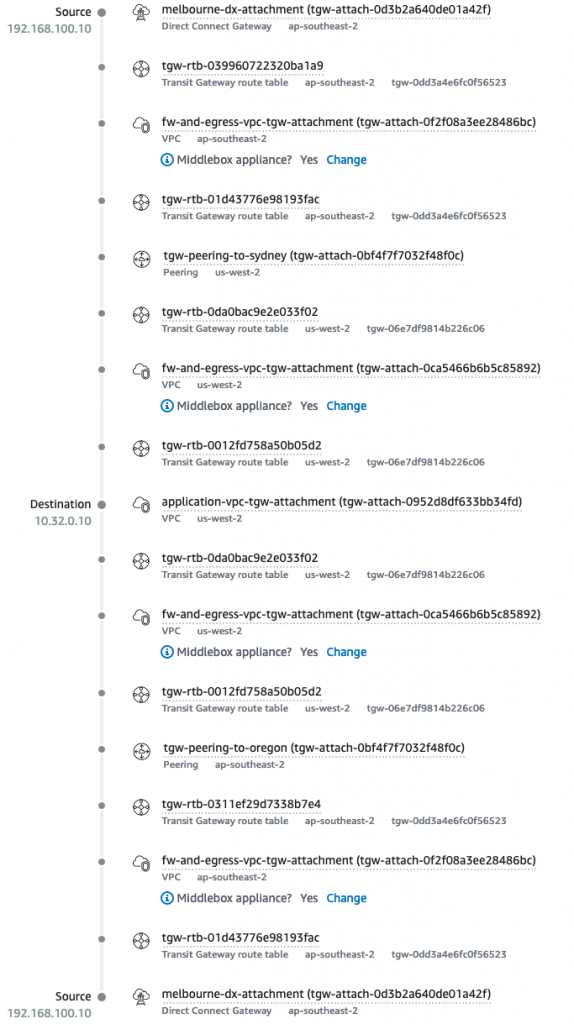 Figure 7: The path from source to destination and back

This use case shows how to use Router Analyzer to walk through a global network and get a true picture of the traffic path. In this example, traffic goes though a middlebox appliance four times to complete a roundtrip.

In this use case, we analyze traffic originating from a remote site that is connected via SD-WAN to Singapore Region, where applications are hosted.

For remote sites where additional bandwidth is required and AWS Direct Connect is not an option, we scale throughput horizontally. This is done with Equal Cost Multi Path (ECMP) routing using multiple VPN connections. If multiple AWS S2S VPN are configured, Router Analyzer will detect this configuration and display it accordingly. As shown below, the return traffic path shows ECMP group. 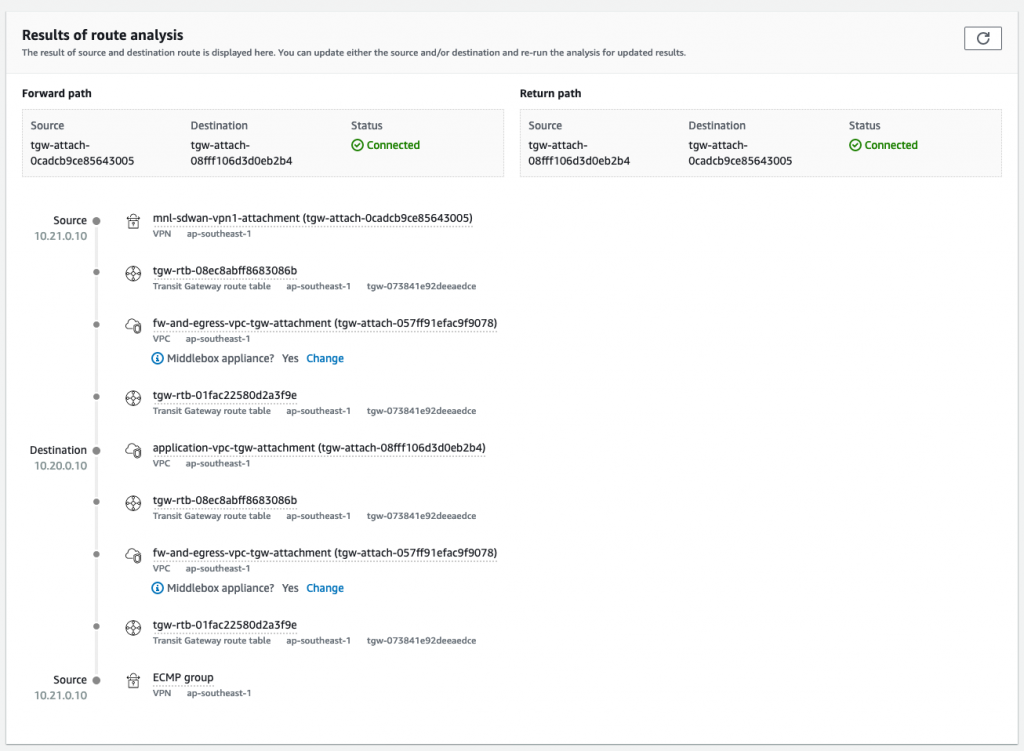 Clicking on “ECMP group” provides further details on which VPNs (and tunnels) are used:

If ECMP is misconfigured, or one of the VPN tunnels is down, only a single VPN attachment is listed. In the example that follows, we’ve shutdown one VPN tunnel and the Console only lists a single attachment for the return traffic.

Figure 9: A single VPN tunnel as opposed to an ECMP Group

Let’s take a look at a scenario where one of the remote sites is offline. For the purpose of this test, we’ve manually shutdown the VPN connection to our SD-WAN headend. This simulates a complete failure. We analyzed traffic from Applications VPC in Singapore towards the remote site. 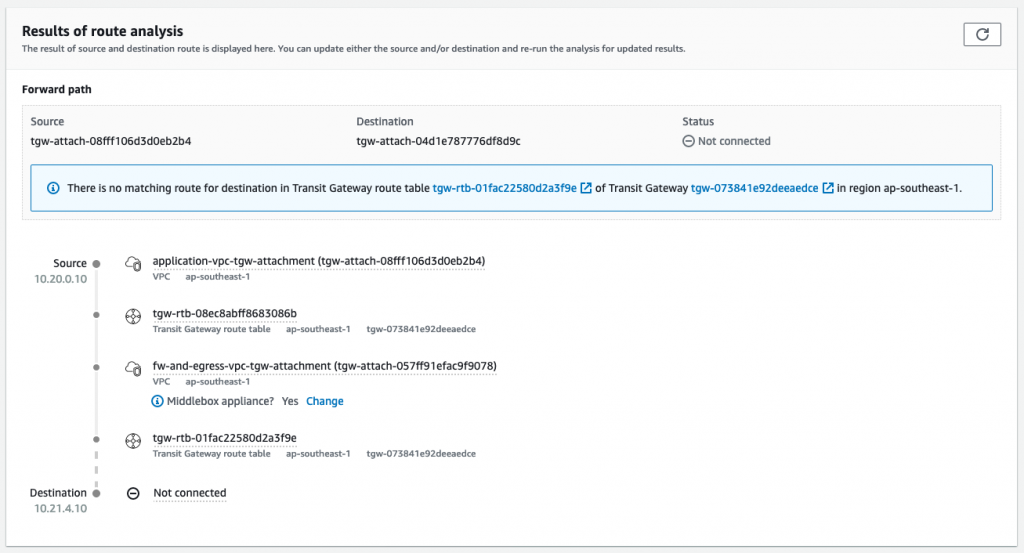 The status is “Not connected.” A message is confirming there is no matching route for the destination available in the AWS Transit Gateway route tables.

Use case 3: Monitoring and observability

During the life cycle of our global network, many events will impact connectivity. This events could be due to hardware or links failure, power disruption and other environmental conditions.

AWS Transit Gateway Network Manager offers monitoring and events consoles that examine the current status of the global network. We can view, at a glance, the health of networks directly connected to our AWS Transit Gateways globally. We can also examine events with timestamps in the past. This makes it easier to triage and conduct root cause analysis.

Route Analyzer requires AWS Transit Gateways in the same AWS Account and AWS Transit Gateway Network Manager must be enabled. You may want to spend some time adding and populating information about your remote sites and devices. Note that certain SD-WAN solutions auto populate this information as part of AWS Transit Gateway Network Manager integration. Additionally, Route Analyzer checks routing configuration along the path in the AWS Transit Gateway route tables only. Network controls like Security Groups and Network Access Control Lists are not evaluated at the VPC level. To do that, it is best to use VPC flow logs. Remember that AWS does not have visibility into a middlebox appliance. The middlebox may be configured to drop traffic, which will affect delivery.

In this blog post, we demonstrated how to use the AWS Transit Gateway Network Manager and Route Analyzer to troubleshoot advanced routing use cases. We also took a quick look at what a complex global network on AWS may look like. AWS customers are already benefiting from software defined networking within AWS and now have more building blocks to extend it beyond the AWS edge.

Shakeel Ahmad is a Solutions Architect based out of Melbourne, Australia specializing in Networking & Cloud Infrastructure. He has a BS in Computer Science and a Master of Science in Network Systems. He’s passionate about technology and helping customers architect and build solutions to adopt the art of the possible on AWS.