As your company grows and gets the benefits of a cloud-based infrastructure, your on-premises sites like offices and stores increasingly need high performance private connectivity to AWS and to other sites at a reasonable cost. Growing your network is hard, because traditional branch networks based on leased lines are costly, and they suffer from the same lack of elasticity and agility as traditional data centers.

At the same time, it becomes increasingly complex to manage and monitor a global network that is spread across AWS Regions and on-premises sites. You need to stitch together data from these diverse locations. This results in an inconsistent operational experience, increased costs and efforts, and missed insights from the lack of visibility across different technologies.

Today, we want to make it easier to build, manage, and monitor global networks with the following new capabilities for AWS Transit Gateway:

These new networking capabilities enable you to optimize your network using AWS’s global backbone, and to centrally visualize and monitor your global network. More specifically:

These features allow you to optimize connectivity from on-premises sites to AWS and also between on-premises sites, by routing traffic through Transit Gateways and the AWS Global Network, and centrally managing through Network Manager.

For example, this is the Geographic view of a global network covering North America and Europe with 5 Transit Gateways in 3 AWS Regions, 80 VPCs, 50 VPNs, 1 Direct Connect location, and 16 on-premises sites with 50 devices: 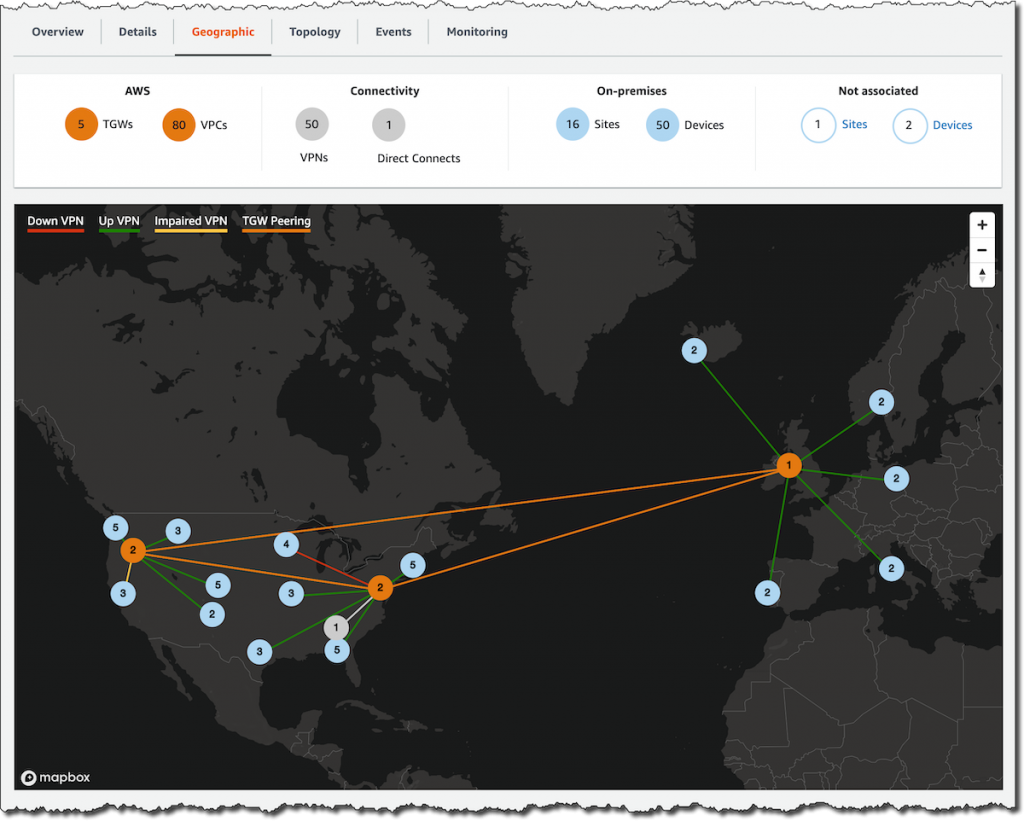 As I zoom in the map, I get a description on what these nodes represent, for example if they are AWS Regions, Direct Connect locations, or branch offices. 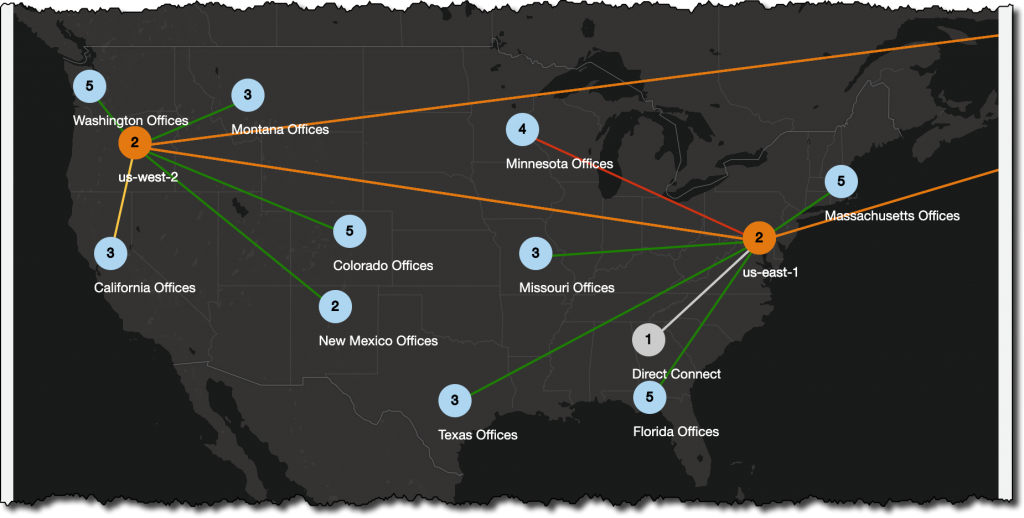 I can select any node in the map to get more information. For example, I select the US West (Oregon) AWS Region to see the details of the two Transit Gateways I am using there, including the state of all VPN connections, VPCs, and VPNs handled by the selected Transit Gateway. 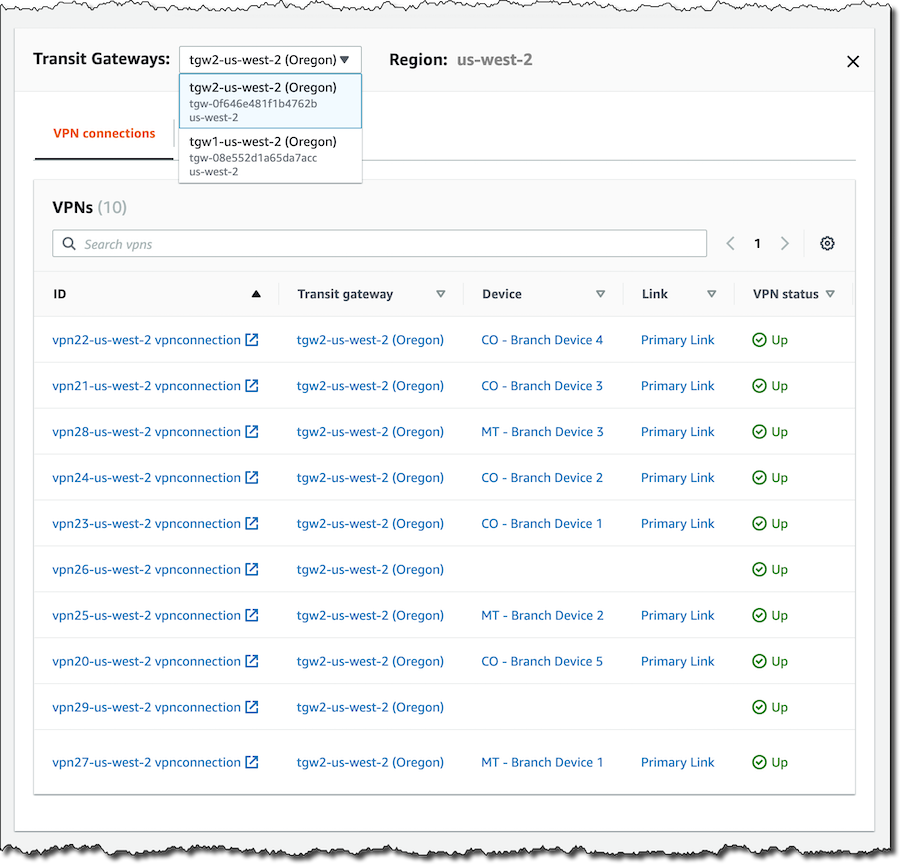 Selecting a site, I get a centralized view with the status of the VPN connections, including site metadata such as address, location, and description. For example, here are the details of the Colorado branch offices. 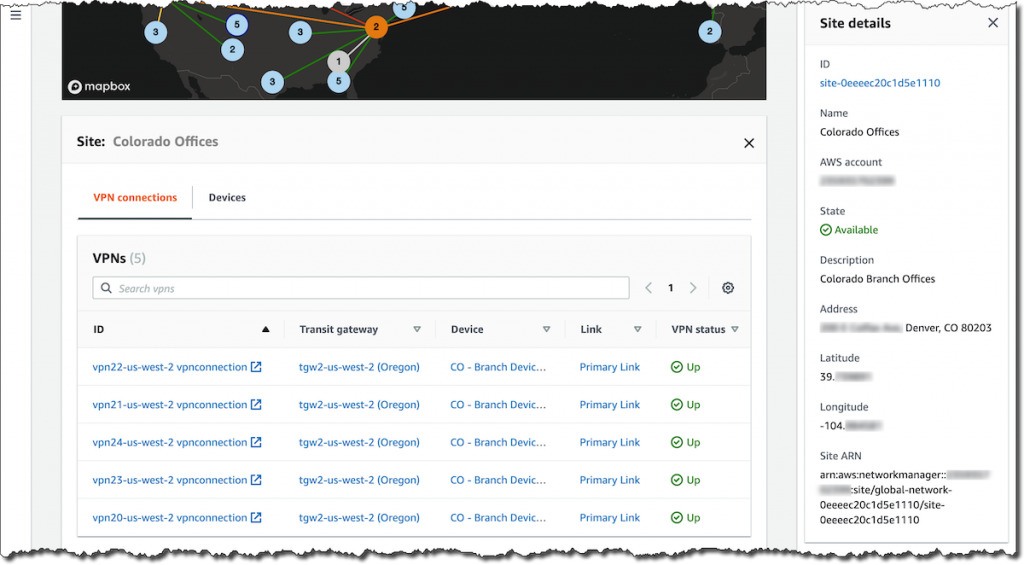 In the Topology panel, I see the logical relationship of all the resources in my network. On the left here, there is the entire topology of my global network, on the right the detail of the European part. Connections statuses are reported in color in the topology view. 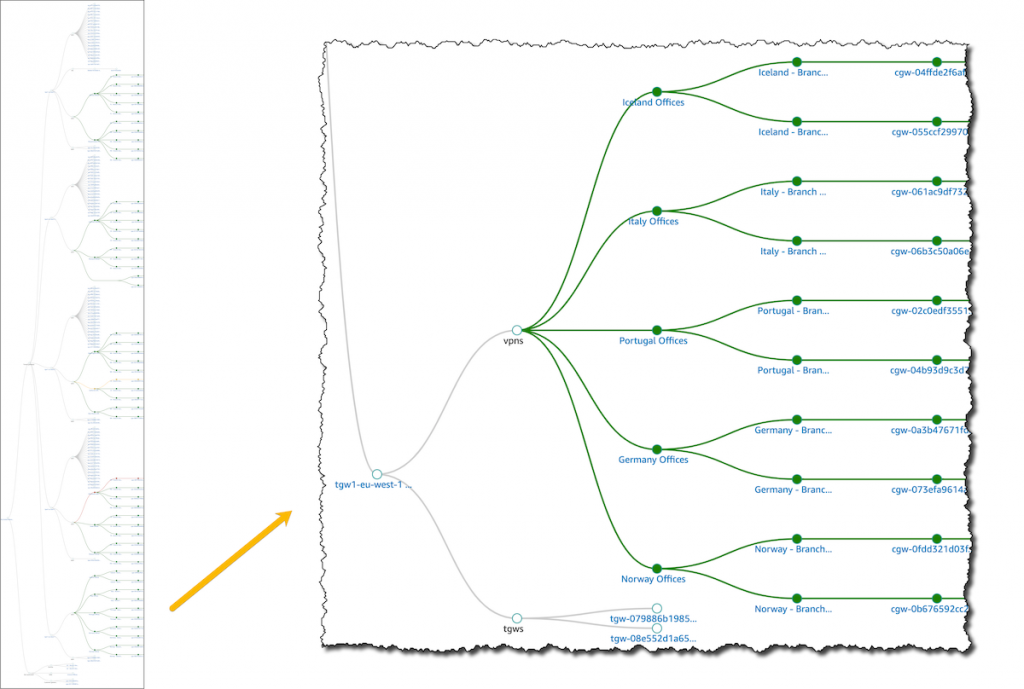 Selecting any node in the topology map displays details specific to the resource type (Transit Gateway, VPC, customer gateway, and so on) including links to the corresponding service in the AWS console to get more information and configure the resource. 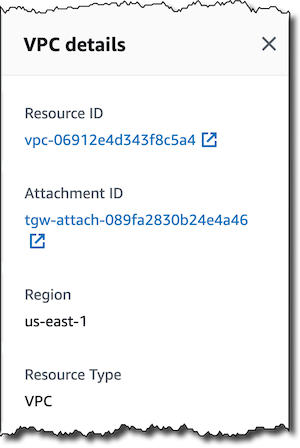 These statistics are kept for 15 months, so that you can access historical information and gain a better perspective on how your web application or service is performing. You can also set alarms that watch for certain thresholds, and send notifications or take actions when those thresholds are met.

For example, these are the last 12 hours of Monitoring for the Transit Gateway in Europe (Ireland). 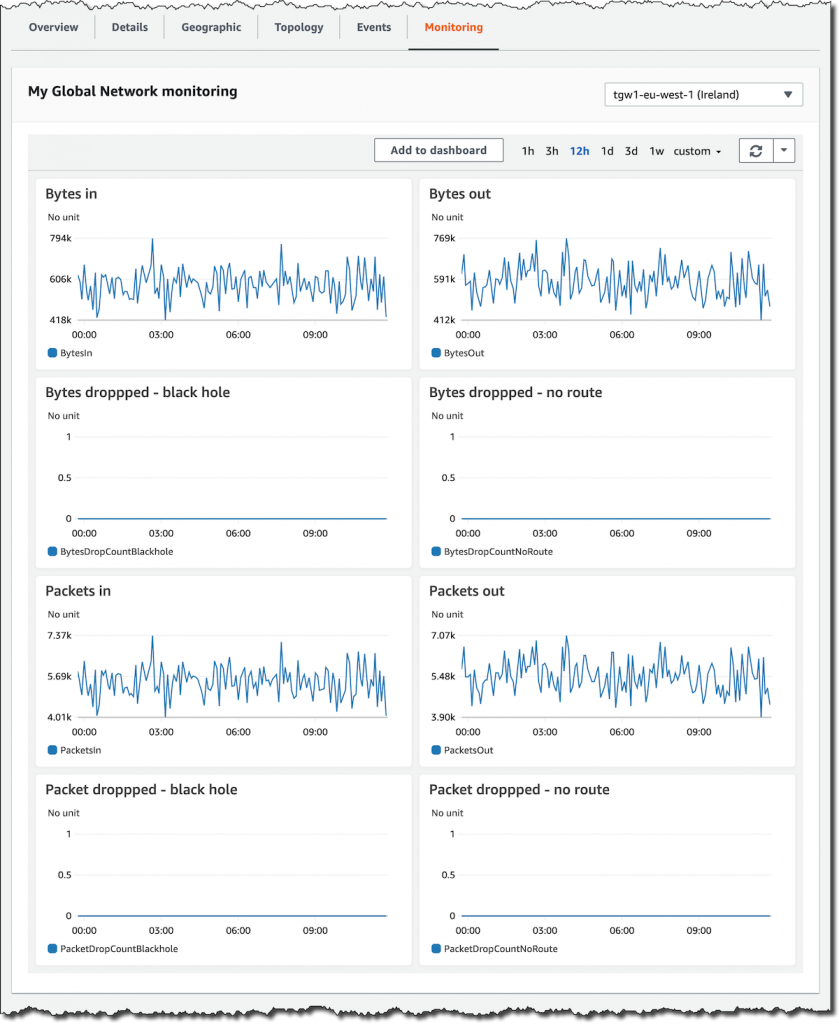 In the global network view, you have a single point of view of all events affecting your network, simplifying root cause analysis in case of issues. Clicking on any of the messages in the console will take to a more detailed view in the Events tab.

Your global network events are also delivered by CloudWatch Events. Using simple rules that you can quickly set up, you can match events and route them to one or more target functions or streams. To process the same events, you can also use the additional capabilities offered by Amazon EventBridge.

Configuring Your Global Network
To get your on-premises resources included in the above visualizations and monitoring, you need to input into Network Manager information about your on-premises devices, sites, and links. You also need to associate devices with the customer gateways they host for VPN connections.

Our software-defined wide area network (SD-WAN) partners, such as Cisco, Aruba, Silver Peak, and Aviatrix, have configured their SD-WAN devices to connect with Transit Gateway Network Manager in only a few clicks. Their SD-WANs also define the on-premises devices, sites, and links automatically in Network Manager. SD-WAN integrations enable to include your on-premises network in the Network Manager global dashboard view without requiring you to input information manually.

There is no additional cost for using Network Manager. You pay for the network resources you use, like Transit Gateways, VPNs, and so on. Here you can find more information on pricing for VPN and Transit Gateway.

You can learn more in the documentation of the Network Manager, inter-region peering, and accelerated VPN.

With these new features, you can take advantage of the performance of our AWS Global Network, and simplify network management and monitoring across your AWS and on-premises resources.