In this post, we will evaluate multiple Cisco SD-WAN (Software Defined Wide Area Network) architectures on Amazon Web Services (AWS), which enable customers to extend the common policy, segmentation, and security of their SD-WAN environments at scale in an operationally efficient manner.

Cisco Systems is an AWS Partner Network (APN) Advanced Technology Partner and a market leader in SD-WAN based on IDC’s 2019 and Gartner reports.

Update from Sept. 15, 2020: The architectures in this post require custom scripting and automation by the customer. While these deployment methodologies are still valid and useful, Cisco vManage now provides native orchestration for these deployments.

To learn more, check out this post: How to Automate and Secure Branch Office Connectivity to AWS with Cisco SD-WAN.

Customers have traditionally been able to extend their branch SD-WAN deployments to the cloud via the Cloud onRamp for IaaS (infrastructure-as-a-service) functionality available via the vManage orchestrator.

AWS Transit Gateway enables you to easily scale connectivity across thousands of Amazon VPCs, AWS accounts, and on-premises networks to a single gateway. It also gives you a single set of controls that let you connect to a centrally-managed gateway to grow your network easily and quickly. 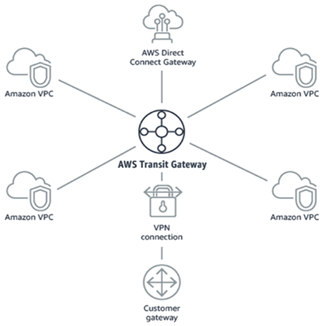 Instead, spoke VPCs are connected to AWS Transit Gateway using VPC attachments, and customers can:

In doing so, you can leverage AWS Transit Gateway to connect between SD-WAN branches through the AWS backbone, as well as connect branches with AWS workloads.

Let’s walk through the steps to deploy each topology.

The example below shows the branch vEdge cloud virtual routers terminating proprietary secure Cisco SD-WAN tunnels from the branch over the internet or via AWS Direct Connect from the data center to a pair of vEdge cloud routers in an SD-WAN VPC on AWS.

There are two additional application VPCs attached to AWS Transit Gateway. These VPCs will be used to demonstrate connectivity from branch office and/or data center to application on AWS. In this post, we refer to these application VPCs as human resources VPC (HR VPC) and engineering VPC (ENG VPC).

The routes between the SD-WAN VPC and the branch are learned via Cisco’s SD-WAN OMP. By redistributing BGP routes into OMP, the SD-WAN network becomes aware of the AWS infrastructure. Traditional route filtering options like route maps can be used in order to make redistribution more granular.

Let’s examine the pros and cons of this topology:

Figure 2 below shows an architecture diagram of the description above. 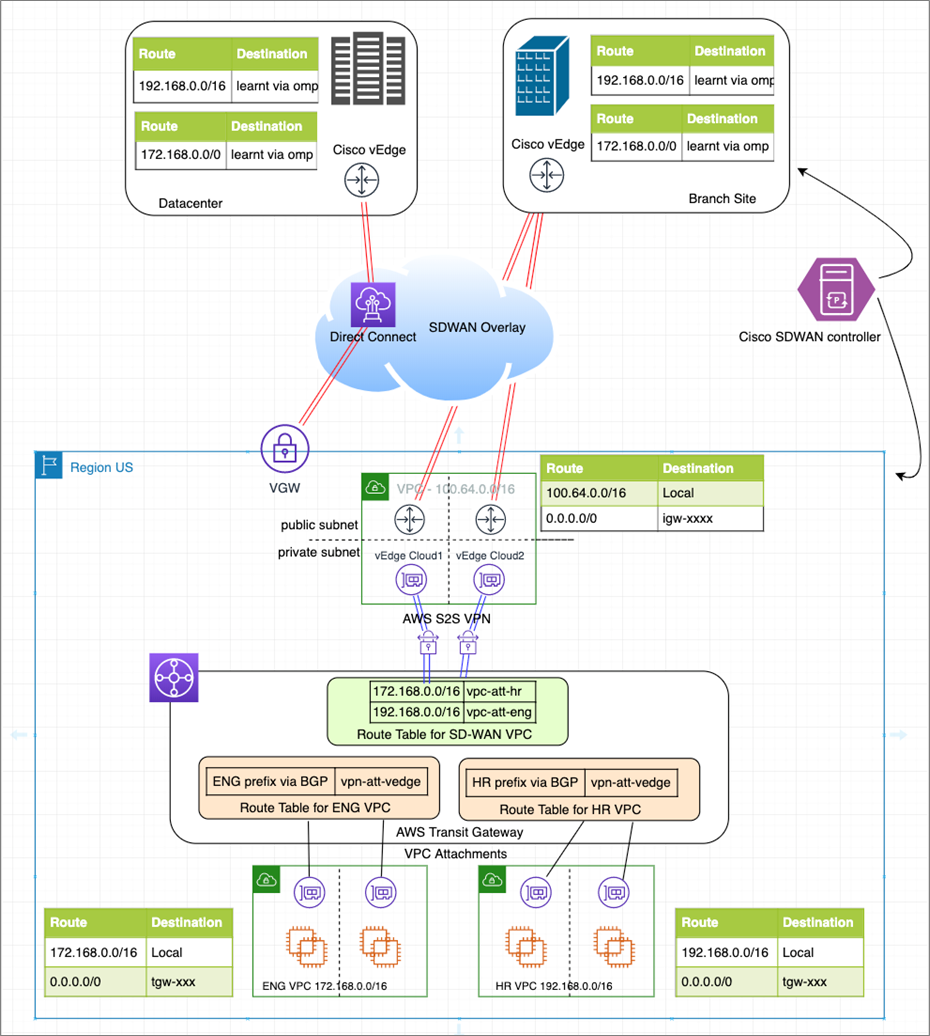 For illustration, only branch-to-AWS connectivity is demonstrated in the example below. The data center-to-AWS via AWS Direct Connect can be configured similarly.

To get started, follow the steps below in vManage: 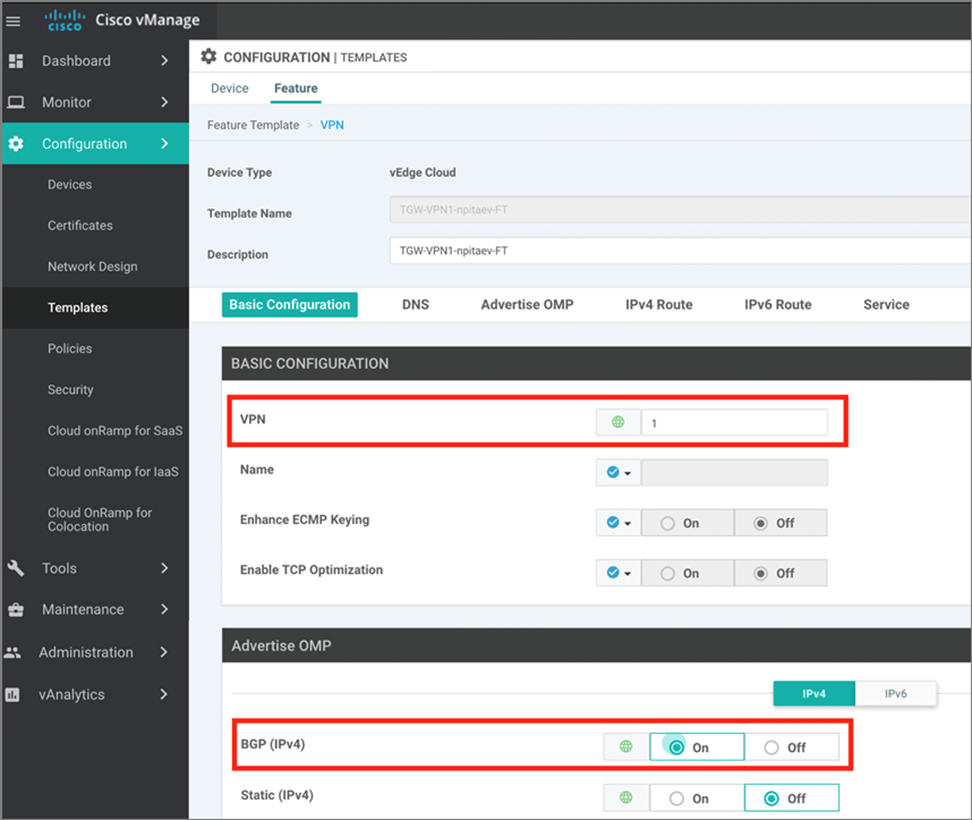 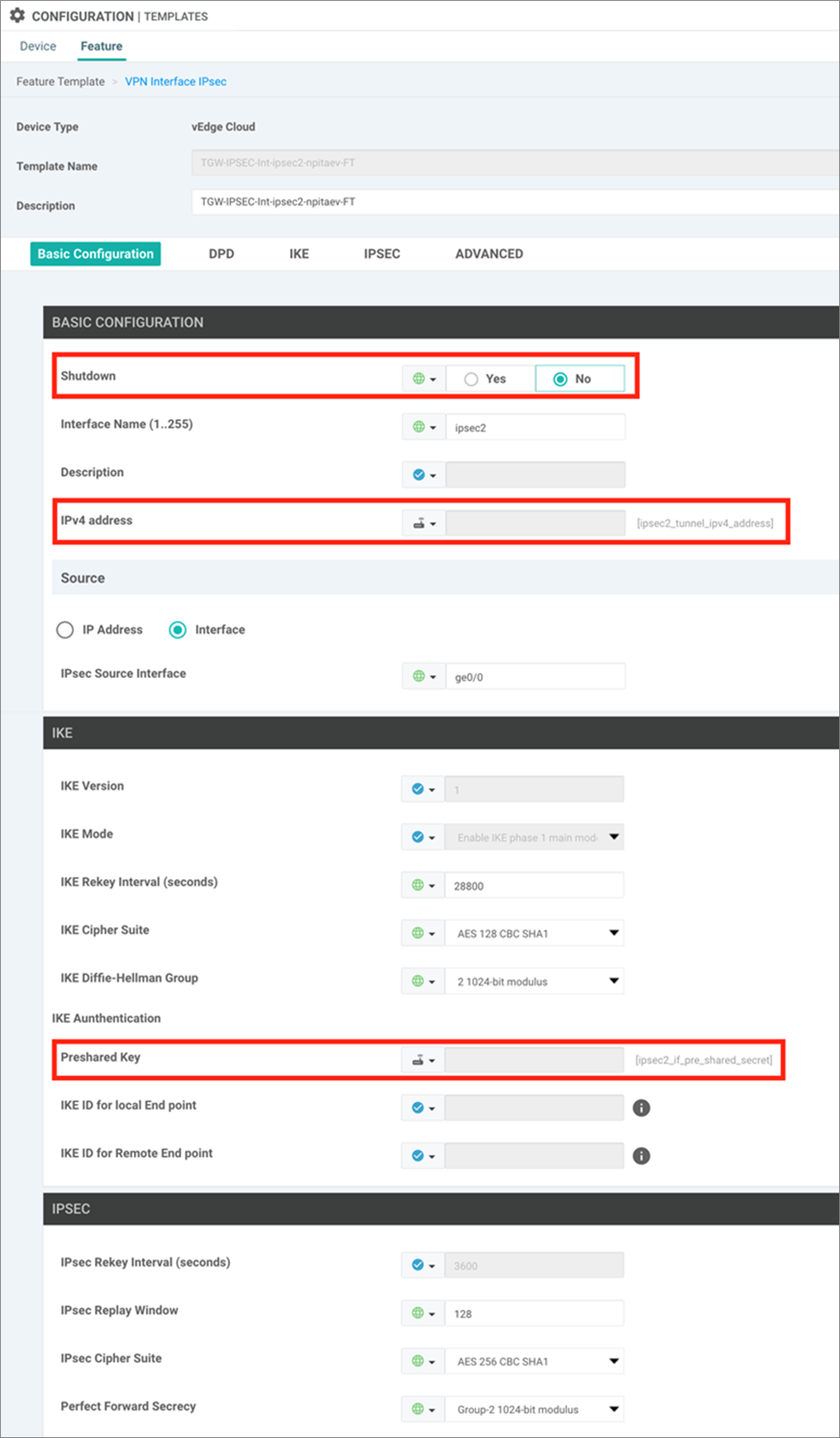 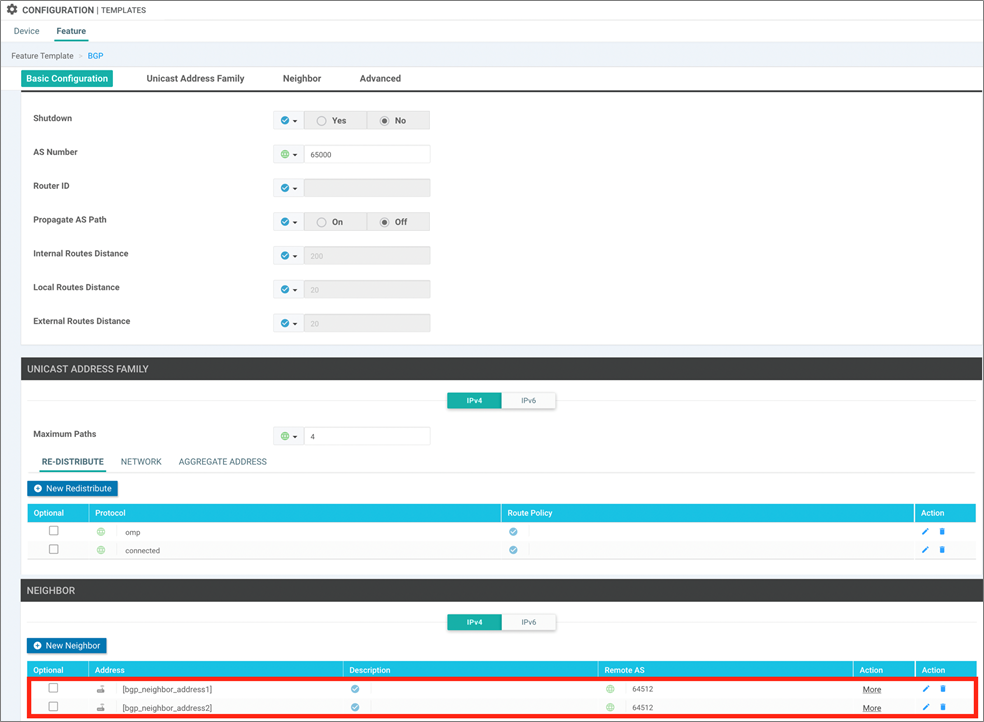 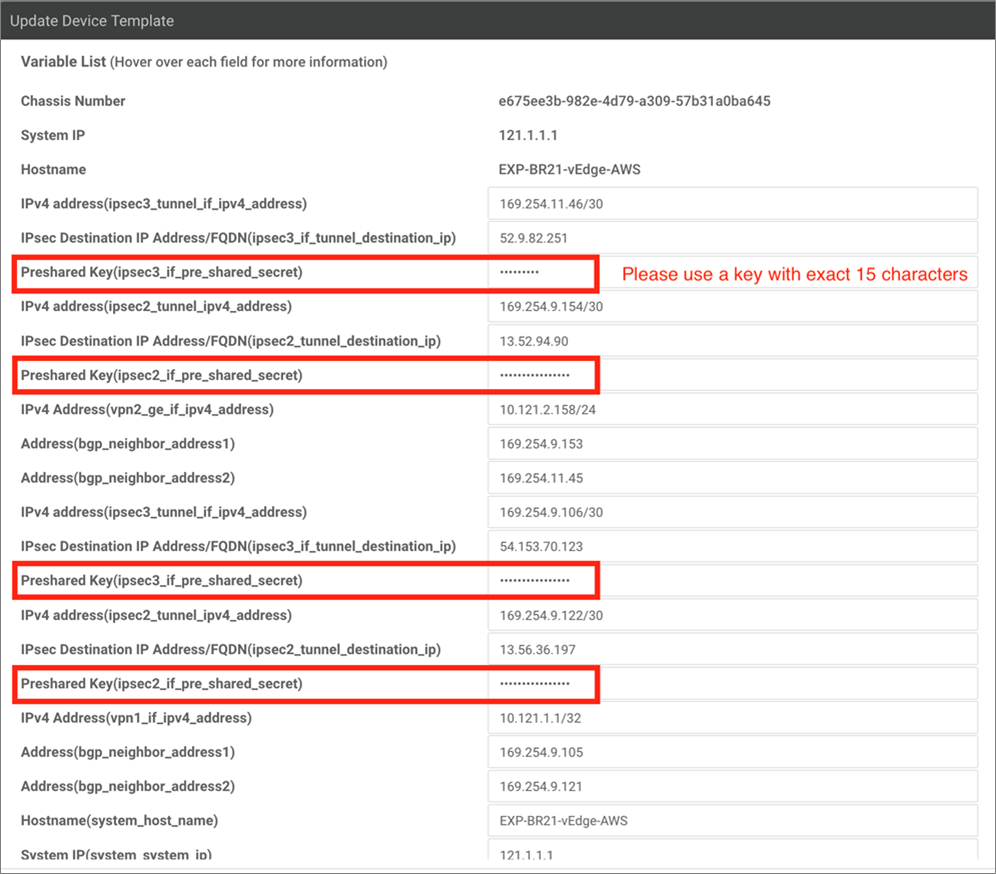 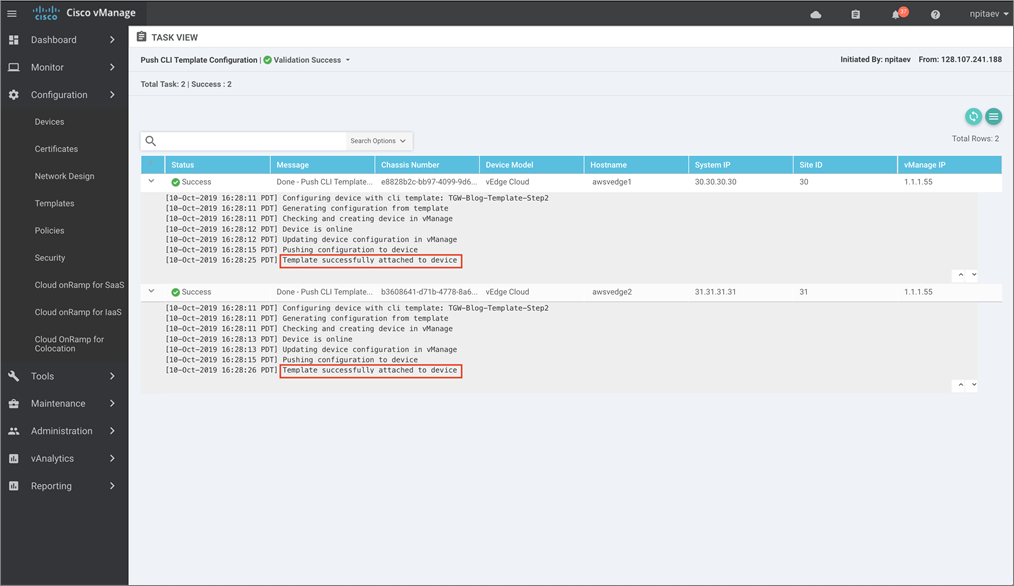 Follow the steps below in the AWS console to configure the routes:

The next architecture we’ll look at is similar to the one detailed above, but with one key difference. The SD-WAN VPC vEdge cloud routers terminate to the AWS Transit Gateway as a VPC attachment, as opposed to VPN attachments.

Note the following configuration modifications when connecting the SD-WAN VPC to AWS Transit Gateway as a VPC attachment: 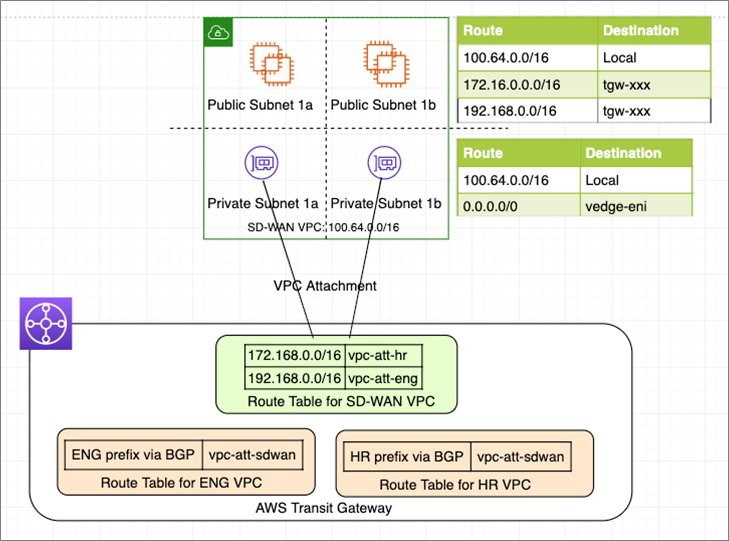 Figure 3 – Branch to AWS TGW via SD-WAN VPC as a VPC attachment.

Let’s examine the pros and cons of this topology compared with the topology we examined earlier in the post.

There are two additional VPC attachments to the AWS Transit Gateway, represented as HR VPC and ENG VPC.

Additionally, a static route is configured on the VPC route table for the HR VPC and ENG VPC with tgw-xxxx as the next hop for non-local routes. The routes from the AWS Transit Gateway to the branch are learnt via BGP, as well.

Figure 4 below shows an architecture diagram of the description above. 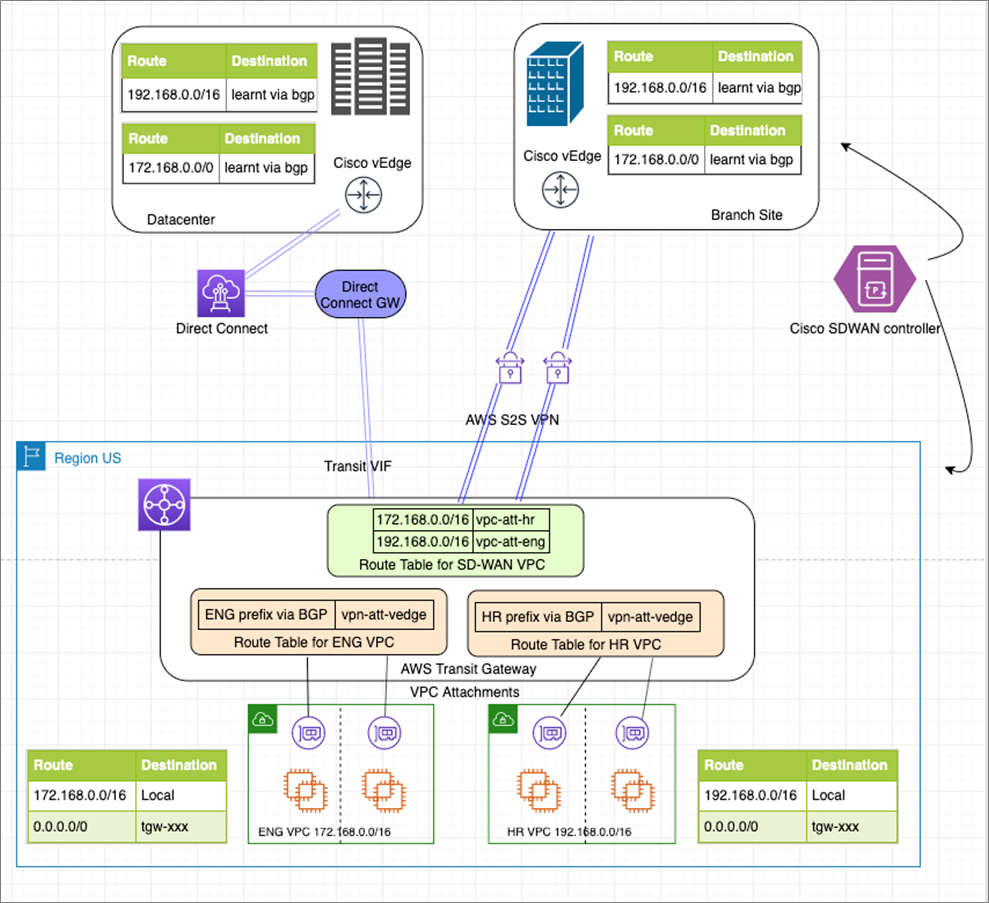 Let’s examine the pros and cons of this topology.

SD-WAN traffic through the AWS network can be routed via services such as firewalls, IDS/IPS, and load balancers. The architectures described above can be adapted to extend this functionality.

For example, you can provision a service, such as a firewall, in the same or different VPC as the SD-WAN VPC. The route tables associations and propagations on the AWS Transit Gateway can be configured to route all SD-WAN traffic through this firewall service.

A detailed step-by-step architecture for this scenario is out of scope for this post, but you can refer to the following links for more information:

This post describes how to extend connectivity from branch office and/or data center to applications running on AWS using Cisco SD-WAN and AWS Transit Gateway.

The pros and cons of each architecture are described so you can chose an architecture that best suits your needs.

Cisco is an APN Advanced Technology Partner. They provides a range of products for transporting data, voice, and video within buildings, across campuses, and around the world.