Amazon CloudFront Functions now makes it possible to do things that were previously only possible with AWS Lambda@Edge, but in a more performant manner. For example, now you can manipulate the URI path—something that is essential when you want to secure an origin using an Origin Access Identity (OAI) with Amazon CloudFront.

In 2017, I wrote a post (Implementing Default Directory Indexes in Amazon S3-backed Amazon CloudFront Origins Using Lambda@Edge) that showed how to rewrite the request between a CloudFront Distribution and an origin (such as Amazon S3) so that URLs such as http://example.com/about/ resolve to a default document index (such as <bucketname>/about/index.html) to avoid S3 returning a “NoSuchKey” error. This results in CloudFront returning an error to site visitors.

In this example, I will use JavaScript code running within a CloudFront Function that is associated with a CloudFront Distribution to change the path of the request URI to append a default index file (index.html in my example) or whenever the path doesn’t have a filename extension, such as .html. When using CloudFront with an S3 bucket that is kept private using an Origin Access Identity (OAI), CloudFront uses permissions associated with your CloudFront Distribution to access S3 using the S3 REST API. This makes sure that the bucket is kept private by allowing S3 to verify that only CloudFront is authorized to access the bucket (which is serving as your website’s origin).

Although CloudFront does let you specify a default document index for the site root, it doesn’t have similar functionality for sub-directories. Therefore, any request for a page such as http://example.com/about/ is passed as-is to S3, but ‘about/’ doesn’t map to a key (also known as a file) in S3. This results in a “KeyNotFound” error message, which is returned by S3 to CloudFront. To avoid unintentionally leaking information about customers’ S3 buckets, CloudFront instead returns a more generic “AccessDenied” error message to the web viewer.

Creating a CloudFront Function and associating it with your distribution

The CloudFront documentation goes into more detail about CloudFront Functions, how to write function code (the programming model), creating the function, and associating it to your distribution. In this example, we’ll use sample code that has already been prepared for our use case. We will create the function using this code, associate it to our distribution, and validate the behavior.

Making sure that we can test our function

By default, CloudFront Functions does publish metrics (such as the number of function invocations, errors, etc.) to CloudWatch at no additional cost. When developing, it can be helpful to add logging statements to your functions to help test your function—these logging messages only get published to CloudWatch Logs when the function is published to the LIVE stage. You may want to remove any logging statements when deploying CloudFront functions to LIVE, since this function will be associated with a viewer request and will be executed on every request to CloudFront. I recommend creating a retention setting on the Log Group for your CloudFront Function to prevent the storage costs of the logs from growing unchecked over time. This is because there is a cost for CloudWatch Logs outside of the provided free tier.

Since the sample code does not contain any logging statements, I have structured the S3 bucket (Origin) as follows so that I can demonstrate the function works as intended.

Above, I have an index.html file that corresponds to the root of my CloudFront Distribution (http://example.com). I also have a sub-folder (about/) which has another index.html file in it (not shown here) that corresponds to http://example.com/about/. Moreover, I’ve put descriptive and unique HTML content in each file so that I can verify in the browser that the expected content is being served based on the requested URI path and output in the browser.

Right now, if I attempt to go to the http://example.com/about/ path of my CloudFront Distribution, I get the following error:

This is expected behavior when using CloudFront with OAI to access an S3 Origin. The same error occurs if I also try http://example.com/about. Now, I’ll implement the CloudFront Function to rewrite the requested URI whenever there isn’t a file extension at the end of each request.

First, I must create the CloudFront Function. In the console, locate the Functions section on the left-hand menu bar.

Next, create a new function. I’ll give the function a name, such as RewriteDefaultIndexRequest. 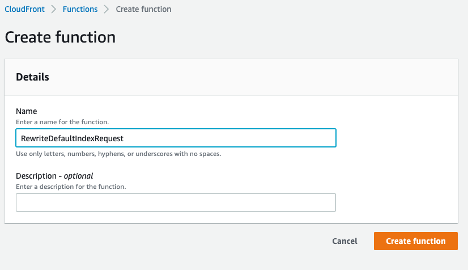 Now, copy the sample code from the aws-samples/amazon-cloudfront-functions GitHub repository (it’s in the url-rewrite-single-page-apps folder as index.js). The sample code does two things:

Note that if you’re using a file other than index.html as your default document index, then you can replace that here. 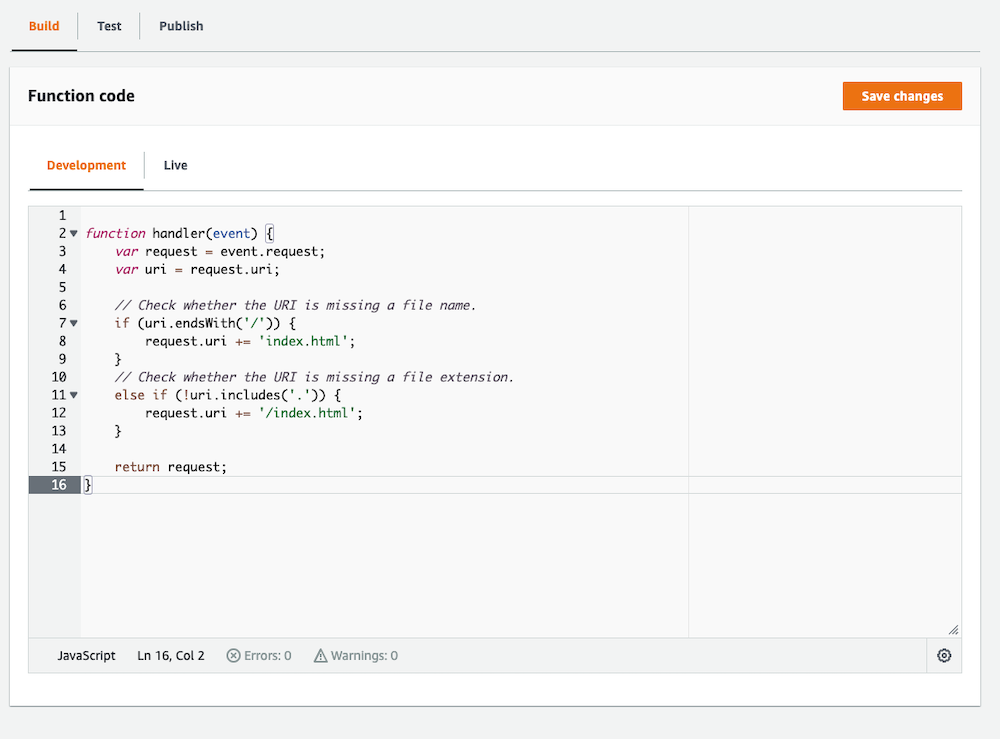 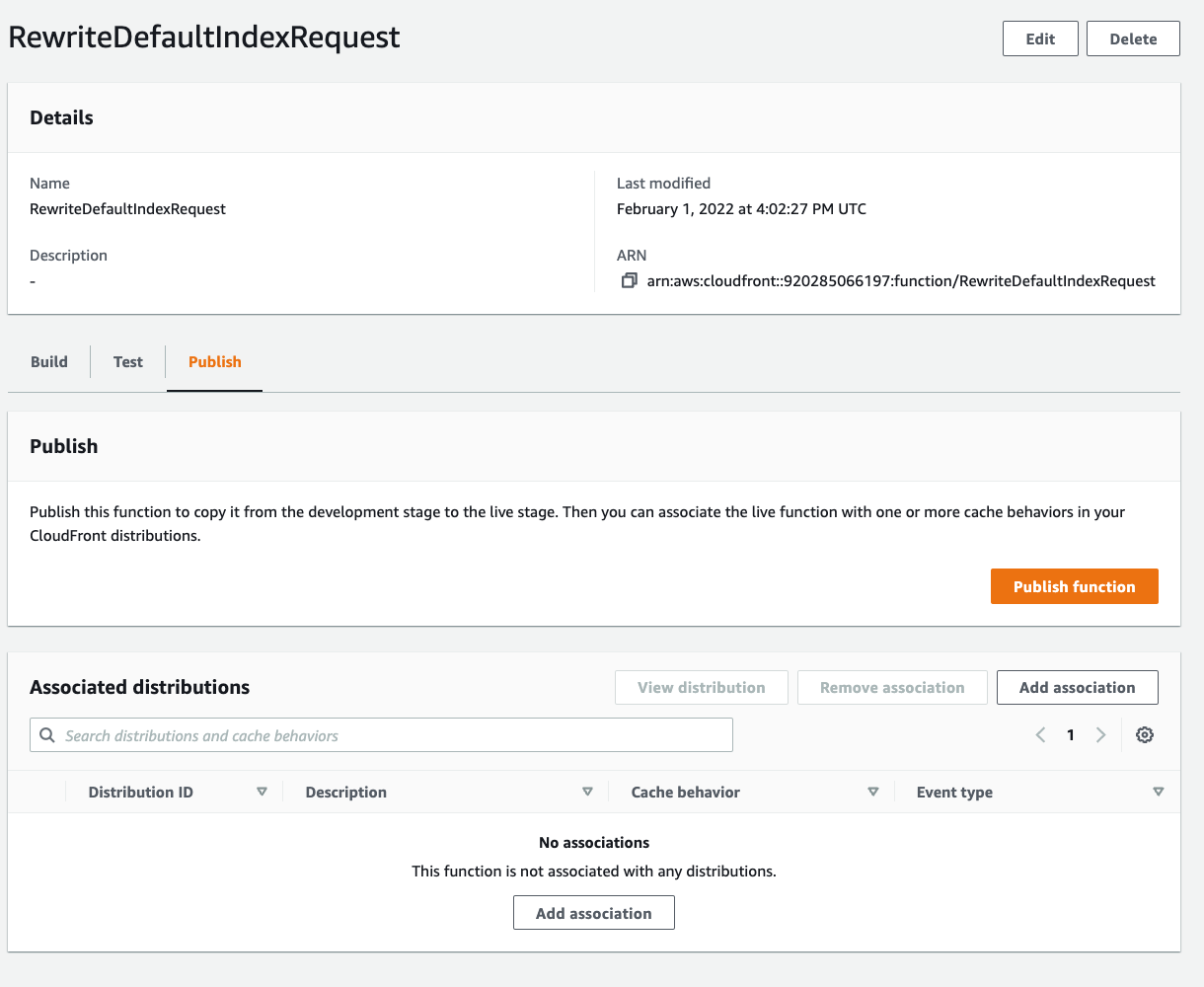 On the next screen, select the appropriate CloudFront Distribution. Making this a viewer request will make sure that the incoming client request gets rewritten to what we expect to exist as a key in our S3 Origin. For example, client requests for ‘about’, ‘about/’ and ‘about/index.html’ all refer to the same object in S3, and we will re-write ‘about’ and ‘about/’ on the incoming request. CloudFront will first check to see if the object already exists in the edge cache, and then fetch it from the origin if needed.

My CloudFront Distribution only has one cache behavior (the one origin), so I’ve chosen that here. If you have multiple S3 origins associated as different behaviors to the same distribution, then you’ll want to make sure that you associate the function with all of them that need this rewrite functionality. 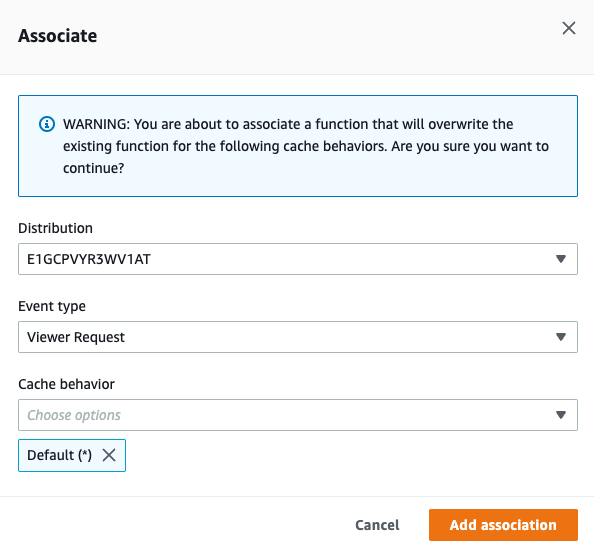 Associating a CloudFront Function to a distribution will require CloudFront to perform a deployment, which can take a few minutes. Monitor the status of the deployment to make sure that it has completed before testing.

Once the deployment has completed (you can see the status above change from “Deploying” to the new “Last modified” date), validate that the function is rewriting the URL by requesting the path http://example.com/about/ , which failed earlier. If successful, then you should expect the distribution to return the index.html file that is in the about/ sub-folder of your S3 origin. We can use the cURL utility on Linux or a browser to test: 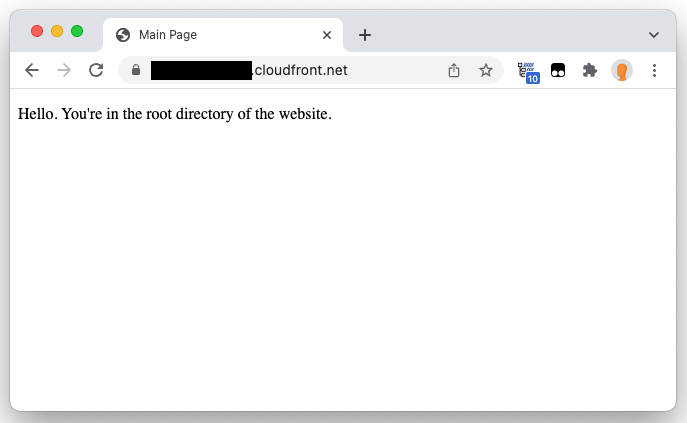 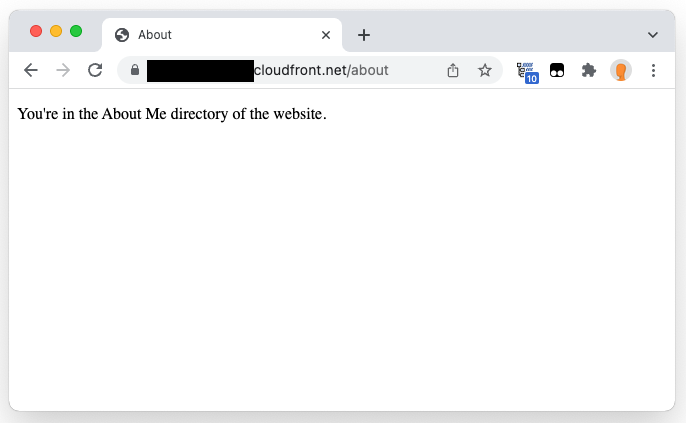 The CloudFront Free Tier currently includes 2,000,000 CloudFront Function Invocations free each month. To avoid any additional costs for this example, remove the CloudFront Function association with your Origin’s behavior and you won’t be charged if you exceed the free tier. Deleting the function itself is optional—there is no charge for the function code. Optionally, you can delete any CloudFront Distribution and Origin if you created them and no longer need them. 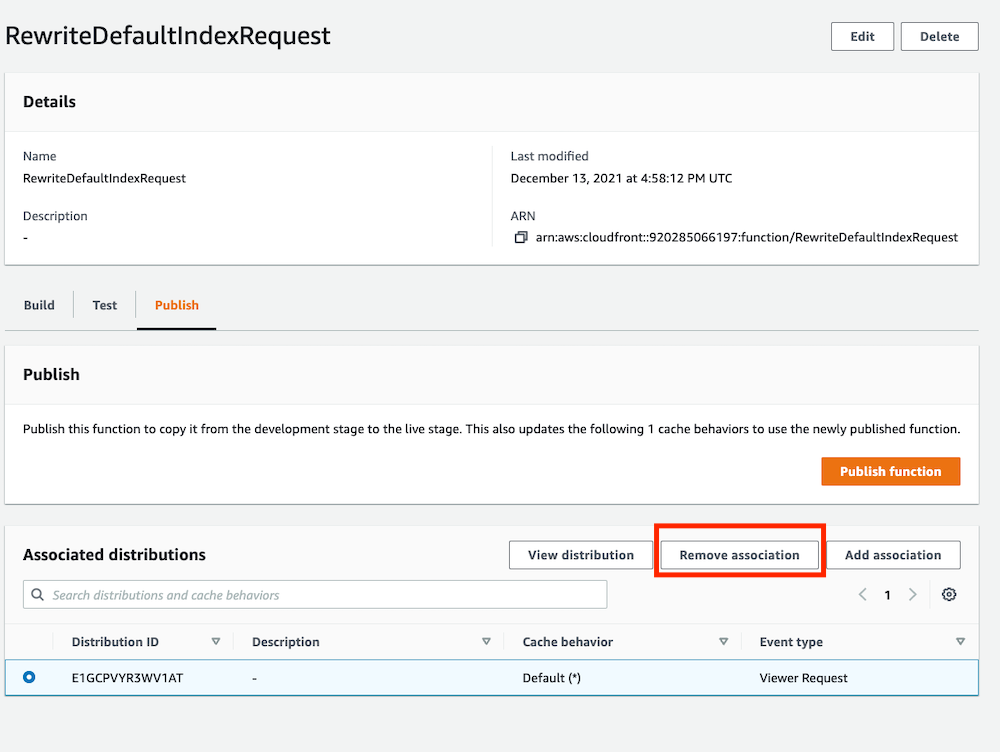 Figure 11: Screenshot showing how to remove function association from distribution.

This article focused solely on how to use CloudFront Functions to rewrite the request URI. If you’re interested in further optimizing the performance and security of your CloudFront Distribution and S3 Origin, then check out the following resources: