In this post, I will explain how you can use ACM Private CA with AWS CloudHSM to operate a hybrid public key infrastructure (PKI) in which the root CA is in CloudHSM, and the subordinate CAs are in ACM Private CA. In this configuration your root CA is portable, meaning that it can be securely moved outside of the AWS Region in which it was created.

Important: This post assumes that you are familiar with the ideas of CA trust and hierarchy. The example in this post uses an advanced hybrid configuration for operating PKI.

The root CA private key of your CA hierarchy represents the anchor of trust for all CAs and end entities that use certificates from that hierarchy. A root CA private key generated by ACM Private CA cannot be exported or transferred to another party. You may require the flexibility to move control of your root CA in the future. Situations where you may want to move control of a root CA include cases such as a divestiture of a corporate division or a major corporate reorganization. In this post, I will describe one solution for a hybrid PKI architecture that allows you to take advantage of the availability of ACM Private CA for certificate issuance, while maintaining the flexibility offered by having direct control and portability of your root CA key. The solution I detail in this post uses CloudHSM to create a root CA key that is predominantly kept inactive, along with a signed subordinate CA that is created and managed online in ACM Private CA that you can use for regular issuing of further subordinate or end-entity certificates. In the next section, I show you how you can achieve this.

With AWS CloudHSM, you can create and use your own encryption keys that use FIPS 140-2 Level 3 validated HSMs. CloudHSM offers you the flexibility to integrate with your applications by using standard APIs, such as PKCS#11. Most importantly for this solution is that CloudHSM offers a suite of standards-compliant SDKs for you to create, export, and import keys. This can make it easy for you to securely exchange your keys with other commercially-available HSMs, as long as your configurations allow it.”

By using AWS CloudHSM to store and perform cryptographic operations with root CA private key, and by using ACM Private CA to manage a first-level subordinate CA key, you maintain a fully cloud-based infrastructure while still retaining access to – and control over – your root CA key pairs. You can keep the key pair of the root in CloudHSM, where you have the ability to escrow the keys, and only generate and use subordinate CAs in ACM Private CA. Figure 1 shows the high-level architecture of this solution. 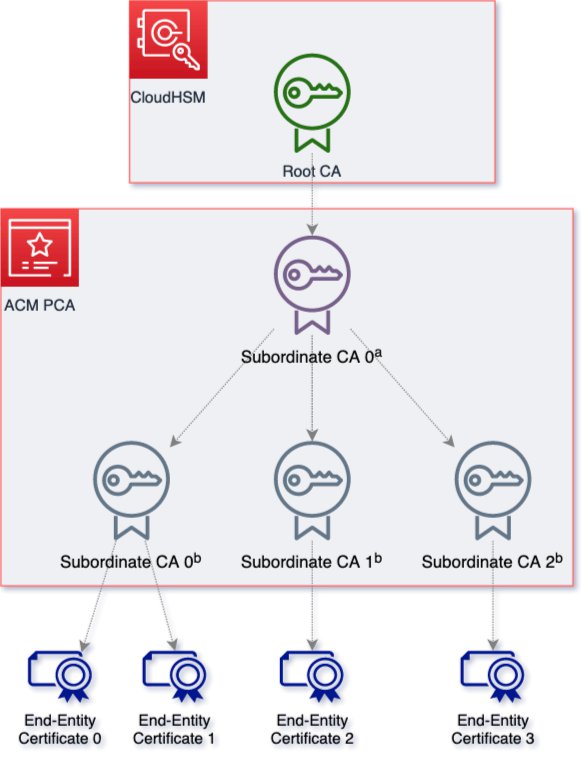 This architecture relies on a root CA that you create and manage with AWS CloudHSM. The root CA is generally required for use in the following circumstances:

To follow this walkthrough, you need to have the following in place:

In this post, you will create an ACM Private CA subordinate CA that is chained to a root CA that is created and managed with AWS CloudHSM. The high-level steps are as follows:

To create a root CA with AWS CloudHSM

To create a subordinate CA in ACM Private CA

For more information about how to create a CA in ACM Private CA and additional configuration options, see Procedures for Creating a CA in the ACM Private CA User Guide, and the acm-pca create-certificate-authority command in the AWS CLI Command Reference.

To sign the subordinate CA with the root CA

After you import your subordinate CA, it is available for use in ACM Private CA. You can configure the subordinate CA with the same validity period as the root CA, so that you can automate CA certificate management using and renewals using ACM without requiring regular access to the root CA. Typically you will create one or more intermediate issuing CAs with a shorter lifetime that chain up to the subordinate CA.

If you have enabled OCSP or CRL for your CA, you will need to maintain your CloudHSM in an active state in order to access the root CA private key for these functions. However, if you have no immediate need to access the root CA you can safely remove the CloudHSM resources while preserving your AWS CloudHSM cluster’s users, policies, and keys in an CloudHSM cluster backup stored encrypted in Amazon Simple Storage Service (Amazon S3).

To remove the CloudHSM resources

To disable expiration of your automatically generated CloudHSM backup

Later, when you do need to access your root CA private key in a CloudHSM, create a new HSM in the same cluster, and this action will restore the backup you previously created with the delete HSM operation.

Depending on your particular needs, you may also want to securely export a copy of the root CA private key to an offsite HSM by using key wrapping. You may need to do this to meet your requirements for managing the CA using another HSM or you may want to copy a cluster backup to a different AWS Region for disaster recovery purposes.

In this post, I explained an approach to establishing a PKI infrastructure using Amazon Certificate Manager Private Certificate Authority (ACM Private CA) with portable root CA private keys created and managed with AWS CloudHSM. This approach allows you to meet specific requirements for root CA portability that cannot be met by ACM Private CA alone. Before adopting this approach in production, you should carefully consider whether a portable root CA is a requirement for your use case, and review the ACM Private CA guide for Planning a Private CA.