Encrypting data at rest is vital for regulatory compliance to ensure that sensitive data saved on disks is not readable by any user or application without a valid key. Some compliance regulations such as PCI DSS and HIPAA require that data at rest be encrypted throughout the data lifecycle. To this end, AWS provides data-at-rest options and key management to support the encryption process. For example, you can encrypt Amazon EBS volumes and configure Amazon S3 buckets for server-side encryption (SSE) using AES-256 encryption. Additionally, Amazon RDS supports Transparent Data Encryption (TDE).

Instance storage provides temporary block-level storage for Amazon EC2 instances. This storage is located on disks attached physically to a host computer. Instance storage is ideal for temporary storage of information that frequently changes, such as buffers, caches, and scratch data. By default, files stored on these disks are not encrypted.

In this blog post, I show a method for encrypting data on Linux EC2 instance stores by using Linux built-in libraries. This method encrypts files transparently, which protects confidential data. As a result, applications that process the data are unaware of the disk-level encryption.

First, though, I will provide some background information required for this solution.

You can use two methods to encrypt files on instance stores. The first method is disk encryption, in which the entire disk or block within the disk is encrypted by using one or more encryption keys. Disk encryption operates below the file-system level, is operating-system agnostic, and hides directory and file information such as name and size. Encrypting File System, for example, is a Microsoft extension to the Windows NT operating system’s New Technology File System (NTFS) that provides disk encryption.

Dm-crypt is a Linux kernel-level encryption mechanism that allows users to mount an encrypted file system. Mounting a file system is the process in which a file system is attached to a directory (mount point), making it available to the operating system. After mounting, all files in the file system are available to applications without any additional interaction; however, these files are encrypted when stored on disk.

Device mapper is an infrastructure in the Linux 2.6 and 3.x kernel that provides a generic way to create virtual layers of block devices. The device mapper crypt target provides transparent encryption of block devices using the kernel crypto API. The solution in this post uses dm-crypt in conjunction with a disk-backed file system mapped to a logical volume by the Logical Volume Manager (LVM). LVM provides logical volume management for the Linux kernel.

The following diagram depicts the relationship between an application, file system, and dm-crypt. Dm-crypt sits between the physical disk and the file system, and data written from the operating system to the disk is encrypted. The application is unaware of such disk-level encryption. Applications use a specific mount point in order to store and retrieve files, and these files are encrypted when stored to disk. If the disk is lost or stolen, the data on the disk is useless. 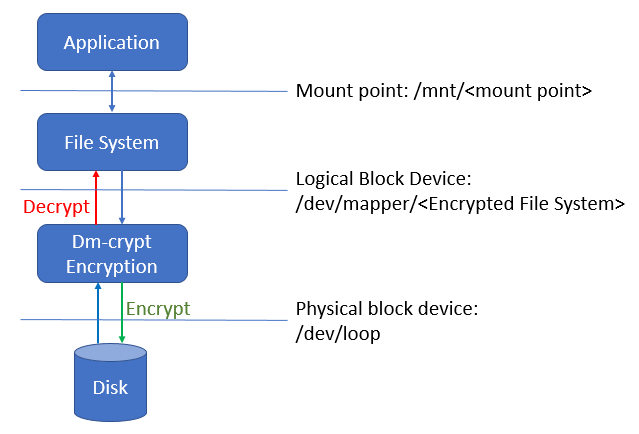 The following diagram shows how the newly encrypted file system resides in the EC2 internal store disk. Applications that need to save sensitive data temporarily will use the secretfs mount point (‘/mnt/secretfs’) directory to store temporary or scratch files.

This solution has three requirements for the solution to work. First, you need to configure the related items on boot using EC2 launch configuration because the encrypted file system is created at boot time. An administrator should have full control over every step and should be able to grant and revoke the encrypted file system creation or access to keys. Second, you must enable logging for every encryption or decryption request by using AWS CloudTrail. In particular, logging is critical when the keys are created and when an EC2 instance requests password decryption to unlock an encrypted file system. Lastly, you should integrate the solution with other AWS services, as described in the next section.

AWS services used in this solution

I use the following AWS services in this solution:

The following high-level architectural diagram illustrates the solution proposed in order to enable EC2 instance store encrypting. A detailed implementation plan follows in the next section. 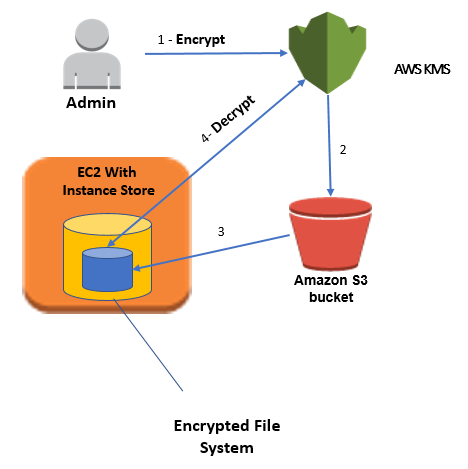 In this architectural diagram:

In this step, you create the S3 bucket that stores the encrypted password file, and apply the necessary permissions. If you are using an Amazon VPC endpoint for Amazon S3, you also need to add permissions to the bucket to allow access from the endpoint. (For a detailed example, see Example Bucket Policies for VPC Endpoints for Amazon S3.)

To create a new bucket:

Configure IAM roles and permission for the S3 bucket

When an EC2 instance boots, it must read the encrypted password file from S3 and then decrypt the password using KMS. In this section, I configure an IAM policy that allows the EC2 instance to assume a role with the right access permissions to the S3 bucket. The following policy grants the correct access permissions, in which your-bucket-name is the S3 bucket that stores the encrypted password file.

You now should have a new IAM role listed on the Roles page. Choose Roles to list all roles in your account and then select the role you just created as shown in the following screenshot.

Next, you use KMS to encrypt a secret password. To encrypt text by using KMS, you must use AWS CLI. AWS CLI is installed by default on EC2 Amazon Linux instances and you can install it on Linux, Windows, or Mac computers.

To encrypt a secret password with KMS and store it in the S3 bucket:

The preceding commands encrypt the password (Base64 is used to decode the cipher text). The command outputs the results to a file called LuksInternalStorageKey. It also creates a key alias (key name) that makes it easy to identify different keys; the alias is called EncFSForEC2InternalStorageKey. The file is then copied to the S3 bucket I created earlier in this post.

Configure permissions to allow the role to access the KMS key

Next, you grant the role access to the key you just created with KMS:

In this section, you launch a new EC2 instance with the new IAM role and a bootstrap script that executes the steps to encrypt the file system, as described earlier in the “Architectural overview” section:

As the command’s results should show, the file system is encrypted with AES-256 using XTS mode. XTS is a configuration method that allows ciphers to work with large data streams, without the risk of compromising the provided security.

This blog post shows you how to encrypt a file system on EC2 instance storage by using built-in Linux libraries and drivers with LVM and LUKS, in conjunction with AWS services such as S3 and KMS. If your applications need temporary storage, you can use an EC2 internal disk that is physically attached to the host computer. The data on instance stores persists only during the lifetime of its associated instance. However, instance store volumes are not encrypted. This post provides a simple solution that balances between the speed and availability of instance stores and the need for encryption at rest when dealing with sensitive data.

If you have comments about this blog post, submit them in the “Comments” section below. If you have implementation questions about the solution in this post, please start a new thread on the EC2 forum.