How to run AWS CloudHSM workloads on AWS Lambda

The workaround is performed by first packaging the CloudHSM client and its requirements in a Lambda layer, and then running the CloudHSM client in a child process from within the Lambda function code to allow communication with the HSMs in your CloudHSM cluster. By leveraging this approach, you gain the benefits of serverless computing (such as increased scalability and decreased admin overhead), as well as the ability to integrate with other AWS services like Amazon CloudWatch Events, Amazon Simple Storage Service (Amazon S3) and AWS Config.

Why would I want to run CloudHSM workloads on Lambda?

Below are some specific use cases enabled by this solution:

This solution shows you how to package the CloudHSM client binary and its dependencies (configuration files and libraries) as well as the CloudHSM Java JCE library to a Lambda layer which is attached to the Lambda function. This enables the function to run the CloudHSM client daemon in the background as a child process, allowing it to connect to the CloudHSM cluster and to perform cryptographic tasks such as encryption and decryption operations.

The solution uses AWS Secrets Manager to store and retrieve the crypto user (CU) credentials that are needed to perform cryptographic operations. If the HSM IPs of the CloudHSM cluster are changed (for example, if the HSMs are deleted and re-created), the Lambda function will automatically update the configuration during runtime. 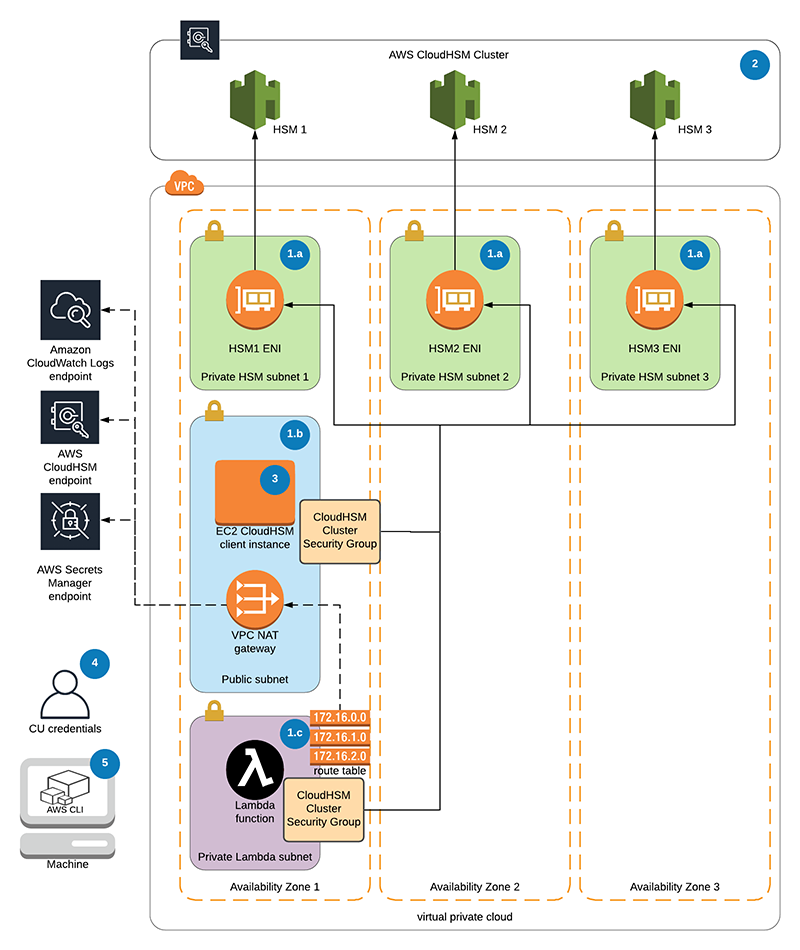 Here are the resources you’ll need in order to follow along with the example in Figure 1:

In this step, you’ll create the Lambda layer that contains the CloudHSM client and its dependencies and the CloudHSM Java library JARs.

Step 3: Create a secret to store the CU credentials

In this step, you will use Secrets Manager to create a secret to store your CU credentials. You must perform this step on your server/machine that has AWS CLI installed and configured.

Step 4: Create an IAM role for the Lambda function

In this step, you’ll create an IAM role that has the permissions necessary for it to be assumed by the Lambda function.

In this step, you will create a Lambda function with the necessary settings.

The command will create a Lambda function with the following configuration:

In this step, you will invoke the Lambda function and check the logs to view the output.

Note: The StatusLogger No log4j2 configuration file found error above is normal and can be ignored. This is related to missing log4j configuration which is normally used to configure logging, but is not needed in this case as the log messages are being written to CloudWatch Logs by default.

This solution demonstrates how to run CloudHSM workloads on Lambda, which allows you to not only leverage the flexibility of serverless computing, but also helps you meet security and compliance requirements by performing cryptographic tasks such as encryption and decryption operations. This approach also allows you to integrate with other AWS services like Amazon CloudWatch Events, Amazon Simple Storage Service (Amazon S3), or AWS Config for a seamless experience across your environment.