AWS CloudHSM provides fully managed, single-tenant hardware security modules (HSMs) in the AWS cloud. A CloudHSM cluster contains either one or multiple HSMs. Multiple HSMs support higher throughput levels for cryptographic operations and provide redundancy. For clusters with multiple HSMs, the CloudHSM service supports server-side automated synchronization of keys and policies. Users, however, are synchronized from the client-side and the synchronization is driven by configuration files which must be refreshed when the cluster size changes. If you do not refresh the configuration files, your CloudHSM user configurations could become unsynchronized and affect the ability of your CloudHSM cluster to provide consistent support of cryptographic information.

When you provision an HSM instance in CloudHSM, the HSM instance provides an elastic network interface (ENI) in your Amazon VPC while the HSM itself resides in a separate VPC managed by AWS CloudHSM. Your applications use the CloudHSM cluster ID to add or remove HSMs from the cluster and the ENI(s) of the HSM instance(s) to access the HSM instances.

You configure your cluster and its HSM instances using CloudHSM client software you deploy on Amazon EC2 instances in your VPC. You only need one such EC2 instance to manage a CloudHSM cluster, but it’s common to deploy additional EC2 instances in other availability zones to provide for client redundancy. Your applications communicate with the HSM instances using the client daemon. You manage and configure the cluster with command line tools including cloudhsm_mgmt_util, key_mgmt_util, and configure. An example of a CloudHSM architecture appears below. 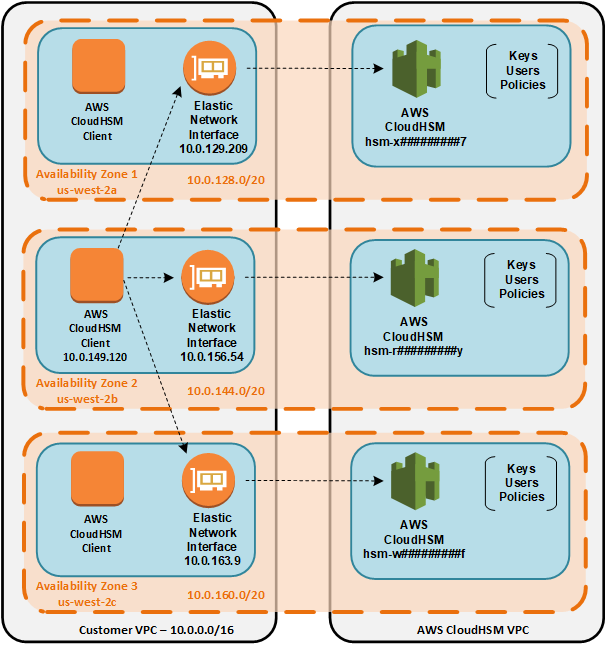 The diagram shows a three-node CloudHSM cluster deployed in the us-west-2 (Oregon) region with three Amazon EC2 instances with the CloudHSM software. The client in Availability Zone 2 is communicating with the cluster through the elastic network interfaces in each availability zone.

When you add an HSM to an existing cluster, AWS CloudHSM clones all users, keys, and policies from another HSM in the cluster. No additional steps are required on your part.

Key management with the key_mgmt_util tool uses the CloudHSM client to communicate with the HSM cluster. Additionally, a fallback, HSM-based synchronization protocol keeps keys in sync.

Again, these safeguards are only necessary when using cloudhsm_mgmt_util. For all other applications and utilities using CloudHSM, the client daemon automatically reconfigures itself as you add and remove HSM instances from your cluster. In the remainder of this post, I will build a CloudHSM infrastructure as shown in the above diagram. I’ll then show you how users on your CloudHSM instances can become unsynchronized, and how to restore proper synchronization.

Important: You’ll incur charges for the resources used in this example. You can find the cost of each service on that service’s pricing page.

AWS CloudHSM provides the ability to create scalable clusters of HSM instances to support the high volumes of cryptographic operations and provide resiliency by supporting multiple availability zones. As mentioned, it’s important to be aware of the various modes of synchronization used in CloudHSM so that each HSM can provide consistent service. In particular, users are synchronized only by the client. Since cloudhsm_mgmt_util doesn’t rely on the client daemon to talk to HSM instances in your cluster, it doesn’t automatically update its configuration. By following the steps above and refreshing the configuration information before changing users or passwords, CloudHSM will keep users and passwords synchronized within the cluster and provide consistent responses to cryptographic operations if the level of redundancy within the HSM cluster changes.