October 13, 2022: This post had been updated with diagram of Figure 1: Outbound internet access through Network Firewall from Amazon EKS worker nodes modified.

This blog post shows how to set up an Amazon Elastic Kubernetes Service (Amazon EKS) cluster such that the applications hosted on the cluster can have their outbound internet access restricted to a set of hostnames provided by the Server Name Indication (SNI) in the allow list in the AWS Network Firewall rules. For encrypted web traffic, SNI can be used for blocking access to specific sites in the network firewall. SNI is an extension to TLS that remains unencrypted in the traffic flow and indicates the destination hostname a client is attempting to access over HTTPS.

This post also shows you how to use Network Firewall to collect hostnames of the specific sites that are being accessed by your application. Securing outbound traffic to specific hostnames is called egress filtering. In computer networking, egress filtering is the practice of monitoring and potentially restricting the flow of information outbound from one network to another. Securing outbound traffic is usually done by means of a firewall that blocks packets that fail to meet certain security requirements. One such firewall is AWS Network Firewall, a managed service that you can use to deploy essential network protections for all of your VPCs that you create with Amazon Virtual Private Cloud (Amazon VPC).

You have the option to scan your application traffic by the identifier of the requested SSL certificate, which makes you independent from the relationship of the IP address to the certificate. The certificate could be served from any IP address. Traditional stateful packet filters are not able to follow the changing IP address of the endpoints. Therefore, the host name information that you get from the SNI becomes important in making security decisions. Amazon EKS has gained popularity for running containerized workloads in the AWS Cloud, and you can restrict outbound traffic to only the known hostnames provided by SNI. This post will walk you through the process of setting up the EKS cluster in two different subnets so that your software can use the additional traffic routing in the VPC and traffic filtering through Network Firewall. 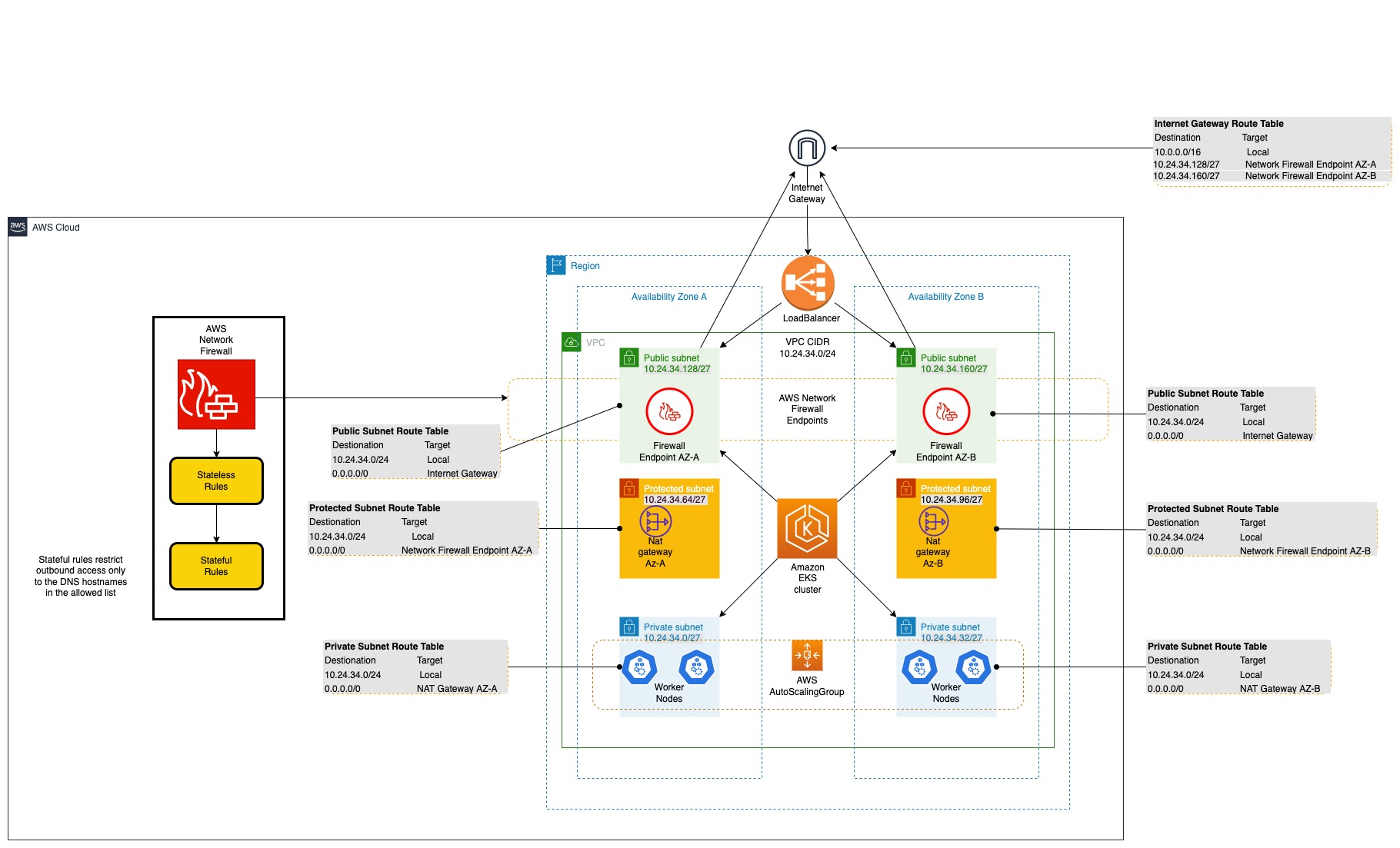 The workflow in the architecture for outbound access to a third-party service is as follows:

The VPC settings for this blog post follow the recommendation for using public and private subnets described in Creating a VPC for your Amazon EKS cluster in the Amazon EKS User Guide, but with additional subnets called protected subnets. Instead of placing the NAT gateway in a public subnet, it will be placed in the protected subnet, and the Network Firewall endpoints in the public subnet will filter the egress traffic that flows through the NAT gateway. This design pattern adds further checks and could be a recommendation for your VPC setup.

To see a practical example of how the outbound traffic is filtered based on the hosted names provided by SNI, follow the steps in the following Deploy a sample section. You will deploy an AWS CloudFormation template that deploys the solution architecture, consisting of the VPC components, EKS cluster components, and the Network Firewall components. When that’s complete, you can deploy a sample app running on Amazon EKS to test egress traffic filtering through AWS Network Firewall.

Deploy a sample to test the network firewall

Follow the steps in this section to perform a sample app deployment to test the use case of securing outbound traffic through AWS Network Firewall.

The prerequisite actions required for the sample deployment are as follows:

In this procedure, you’ll deploy the VPC architecture by using a CloudFormation template.

To deploy the VPC architecture (console)

In your account, launch the AWS CloudFormation template by choosing the following Launch Stack button. It will take approximately 10 minutes for the CloudFormation stack to complete.

Note: The stack will launch in the N. Virginia (us-east-1) Region. To deploy this solution into other AWS Regions, download the solution’s CloudFormation template, modify it, and deploy it to the selected Region.

Deploy and set up access to the EKS cluster

In this step, you’ll use the eksctl CLI tool to create an EKS cluster.

To deploy an EKS cluster by using the eksctl tool

There are two methods for creating an EKS cluster. Method A uses the eksctl create cluster command without a configuration (config) file. Method B uses a config file.

Note: Before you start, make sure you have the VPC subnet details available from the previous procedure.

Method A: No config file

You can create an EKS cluster without a config file by using the eksctl create cluster command.

Method B: With config file

Another way to create an EKS cluster is by using the following config file, with more options with the name (cluster.yaml in this example).

To deploy a sample Pod on the EKS cluster

In this procedure, you’ll update the Network Firewall stateful rules to allow the aws.amazon.com domain name.

Re-test from the sample pod

In this step, you’ll test the outbound access once again from the sample Pod you created earlier in the To deploy a sample Pod on the EKS cluster procedure.

To test the outbound access to the aws.amazon.com hostname

If the VPC subnets are organized according to the architecture suggested in this solution, outbound traffic from the EKS cluster can be sent to the network firewall and then filtered based on hostnames provided by SNI.

Collecting hostnames provided by the SNI

In this step, you’ll see how to configure the network firewall to collect all the hostnames provided by SNI that are accessed by an already running application—without blocking any access—by making use of CloudWatch and alert logs.

To configure the network firewall (console)

To check the rules in the AWS Management Console

To test based on stateful rule

Optionally, you can also create an AWS Lambda function to collect the hostnames that are passed through the network firewall.

The sample Lambda code from Figure 5 is shown following, and is written in Python 3. The sample collects the hostnames that are provided by SNI and captured in Network Firewall. Network Firewall logs the hostnames provided by SNI in the CloudWatch Alert logs. Then, by creating a CloudWatch logs subscription filter, you can send logs to the Lambda function for further processing, for example to invoke SNS notifications.

In this step, you’ll clean up the infrastructure that was created as part of this solution.

To delete the Kubernetes workloads

To delete the CloudFormation stack and AWS Network Firewall

By following the VPC architecture explained in this blog post, you can protect the applications running on an Amazon EKS cluster by filtering the outbound traffic based on the approved hostnames that are provided by SNI in the Network Firewall Allow list.