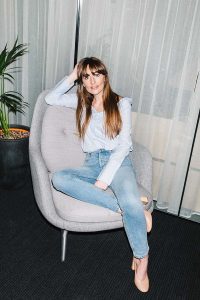 As the CEO and co-founder of Peanut, a social networking app for new mothers, Michelle Kennedy knows a thing or two about growing a company from scratch. Not only has the app—which only launched in February 2017—already struck a chord with countless mom groups online and with the media, but it’s also facilitated over 10 million “waves” (think: swipes), two million messages, and 170,000 members.

A former lawyer turned working entrepreneur and mom, Kennedy credits her knowledge of the dating apps industy—she spent five years at dating app company Badoo and was a board advisor at Bumble—as well as an absence of relatable apps for moms for Peanut’s success. We recently spoke to Kennedy, who shared five bits of advice for her fellow entrepreneurs.

If your target audience is female, make sure your UI/UX speaks to them.

“With so many of the apps that are geared toward mothers, you can tell that the design came from an agency because it feels clumsy—almost as if they tried to stuff what their client was asking for into an existing design, rather than designing something for problem fit. Such apps also tend to be very utilitarian in function and feature lots of icons that scream motherhood, such as prams or a rattle—and while I love being a mom, a baby rattle isn’t representative of my life. When a woman becomes a mother, she doesn’t automatically lose her appreciation for design.”

Don’t be afraid to challenge VCs if you feel they have the wrong data points.

“As I was making the business case for Peanut during a pitch, I remember one VC asked me why mothers needed this app if all they do is hang out in coffee shops or meet at the park. Others would say, let me ask my wife, daughter, niece, or assistant about the product. It felt unfair to me because I wasn’t sure that these groups represented the average mother. It made my head want to explode. In retrospect, I wished that I had gone back and said, ‘If you need data points, here are some people that you can speak with.’ I also wish that I had head-on dealt with it. If you suspect for a second that you might be in that position, deal with it right away. Luckily, all of my current investors have been incredible in that they went out and did their own research. That’s really your dream. And if you look hard enough, you will find those very smart, real investors who will do that for you.”

Be specific about how your product stands out.

“We know that mothers also use WhatsApp, Facebook Messenger, and other messaging apps to reach out to their girlfriends, so when we started, we knew that we had to make our product and messaging superior to other products on the market. That’s why we have a polling and scheduling feature in our chat section so that users can quickly set up times to meet. It only takes three clicks and it goes straight to the calendar on your phone. You absolutely don’t get that functionality anywhere else. Peanut is very, very, specifically geared to address this question.”

“I know people say this all the time, but it’s true. A girlfriend of mine who runs a business that’s very, very different from mine just told me about this incredible book called ‘Radical Candor’ [by CEO coach Kim Scott]. Reading it has been really important for me because when I was previously running this huge company, I had so many heads reporting to me that it was not easy, but at least easier, to make tough decisions because it didn’t feel as personal. However, now that I’m running a small company, sometimes you have to have difficult conversations and it’s definitely not easy because everything is personal. Kim’s book has helped me look inside and learn to tell myself, ‘Okay, Michelle, it’s not great to tell everyone things are fine when they’re not.'”

Find a co-founder who’s the yin to your yang.

“My co-founder is very clearly that to me and I think that we complement each other very well. He’s very logical and grounded, whereas I’m always seeing 15 steps ahead and it’s a good balance. That’s not to say that everyone has to have a co-founder. I remember that I’ve spoken to people before where they’re like, ‘Oh, people have told me if I don’t have a co-founder I won’t find investment.’ I don’t think that’s always true. It depends on your character, but if there is someone who is a good complement, a good blend to you, I think that would be important.”